François-Auguste-René Rodin (1840–1917) was born in Paris and is considered by many to be the first 'modern' sculptor. He was turned down by the prestigious École des Beaux-Arts in Paris and thus escaped the rigid neoclassical training that still dominated its curriculum in the mid-1850s. Instead Rodin was employed as a modeler for the highly successful sculptor Albert-Ernest Carrier-Belleuse (1824–1887). Rodin’s discovery of Michelangelo, during a visit to Italy in 1875-76 was a pivotal moment in his career. Rodin would, in turn, break new ground in sculpture, paving the way for twentieth-century art, by introducing methods and techniques that were central to his own artistic aesthetics. 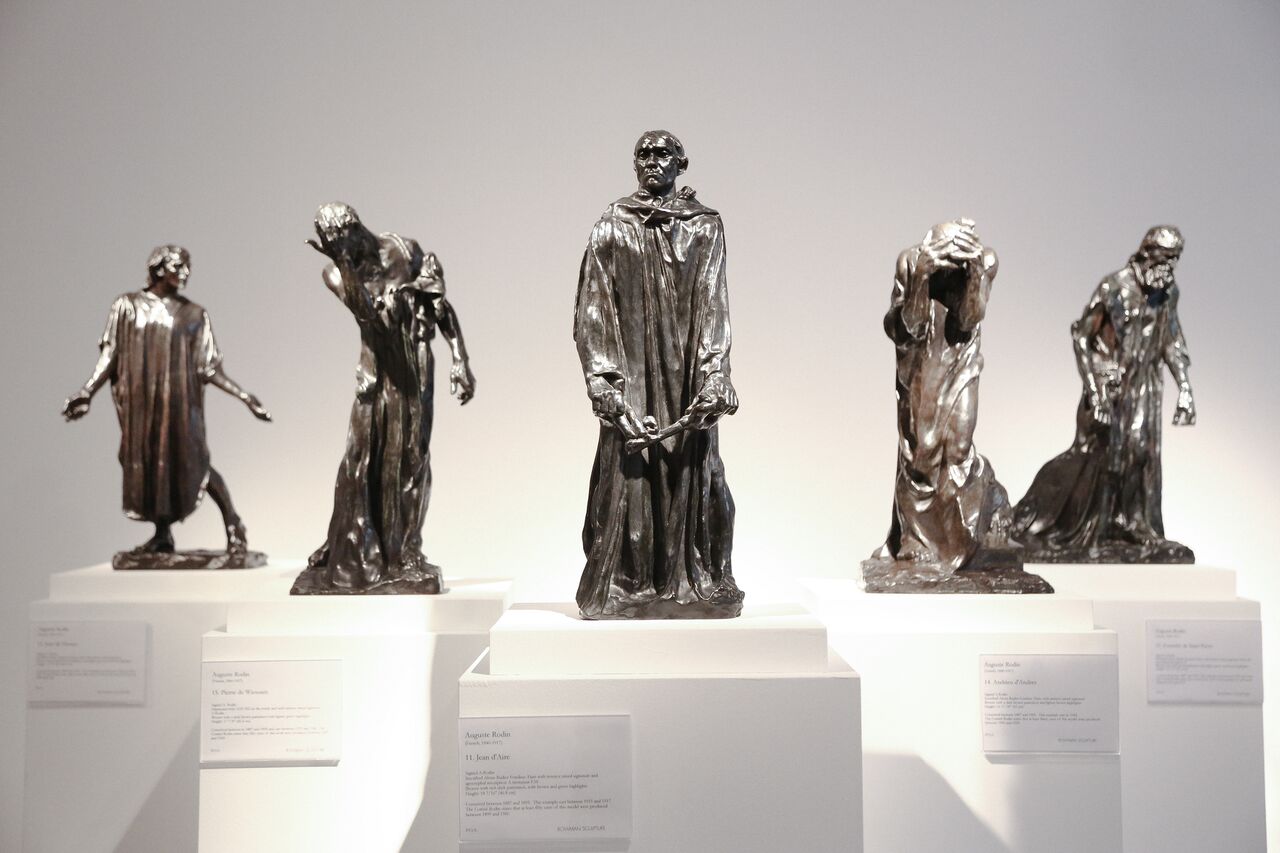 Although it wasn’t until his early 40s that Rodin started to become recognised, he describes his major breakthrough as being 'Man with a Broken Nose' (1863-1864). Then with a large team assisting him he went on to create The Burghers of Calais, one of which is situated at Victoria Tower Gardens in the shadow of the Houses of Parliament in London; cast 1908, installed on this site in 1914 and unveiled 19 July 1915. He gifted a collection of his sculptures to the V&A in honour of British and French soldiers fighting side by side during World War I. In 1914 he exhibited at Grosvenor House in Park Lane, London alongside major Impressionist and Post-Impressionist painters such as Monet, Gauguin, Van Gogh and Cézanne. There was a large room devoted entirely to his work, and he selected the sculptures himself to represent the range and significance of his output.

Rodin died aged 77 on 17 November 1917 in Meudon, France, passing away months after the death of his partner Rose Beuret. In his will he left his studio and the right to make casts from his work to the French Government. The Rodin Museum was opened in August 1919 in a Paris mansion that housed the artist's studio during his final years. The space also features unearthed pieces from Camille Claudel, who was Rodin's lover and worked as his assistant for some time. Their relationship is said to have inspired many of the artist's more overtly amorous works, including 1882's 'The Kiss'. 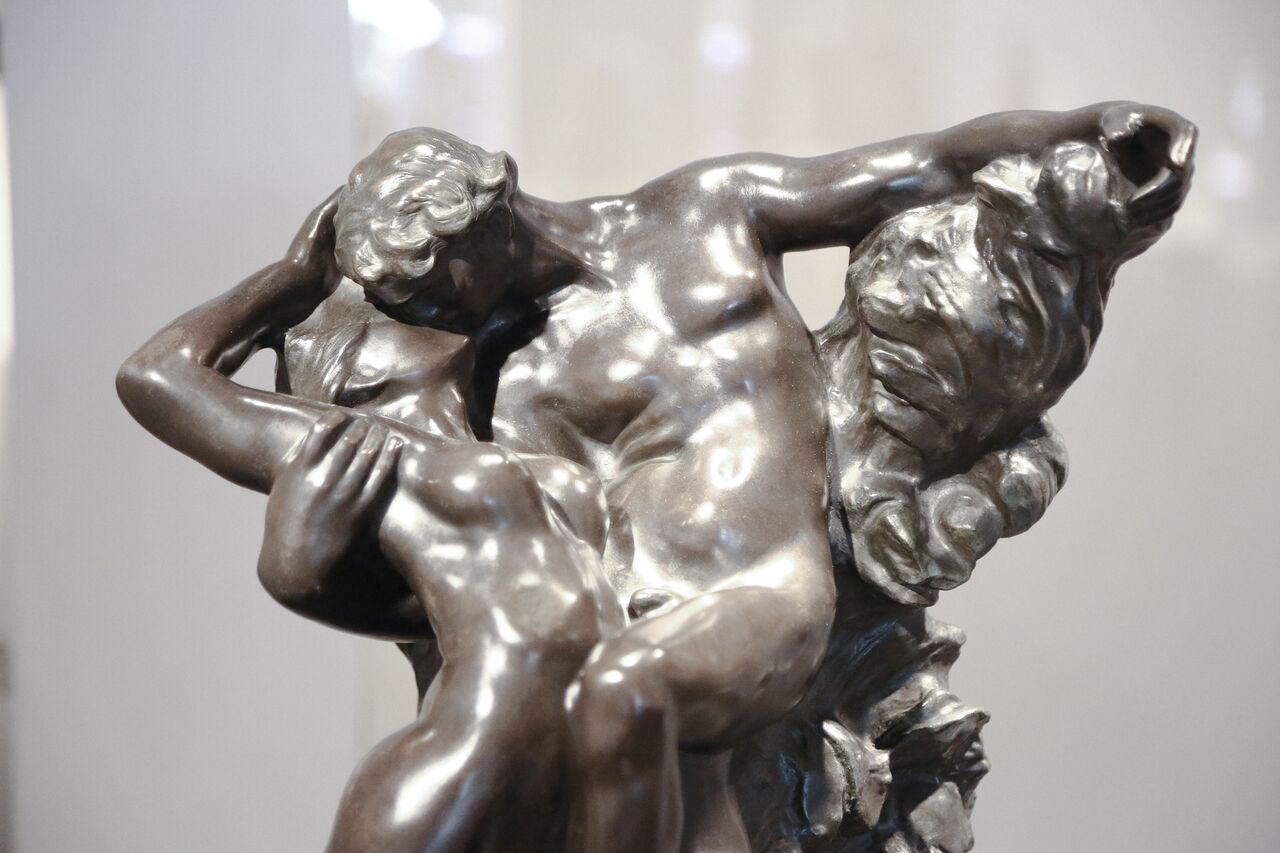 Exemplifying Rodin’s earlier work, visitors to the exhibition will be able to see 'Maquette for The Burghers of Calais', which the sculptor first conceived in 1884 as the inspiration for his emblematic monument. Created as a homage to the brave citizens of Calais who sacrificed themselves to the invading English forces during the Hundred Years’ War (1337-1453), this rare model (cast in 1975) offers us a fascinating insight into the artist’s early concept for this commemorative public sculpture.

Among the extremely rare works on show is Rodin's 'Fugit Amor', originally conceived in marble in 1887, and later cast in bronze for the Musée Rodin by the Alexis Rudier foundry in 1944. First realised as part of 'The Gates of Hell' and inspired by the story of Paolo and Francesca from Dante’s 'Inferno', the two figures known as Fugit Amor can be seen twice on the right hand door. Another example of a notable work on display is 'The Abduction of Hippodamie' (c1871), an early work part modelled by Rodin under the mentorship of Albert-Ernest Carrier-Belleuse (1824–1887). Depicting a centaur carrying a young woman, 'The Abduction of Hippodamie' is a remarkable example of two sculptors collaborating with surprising effect. 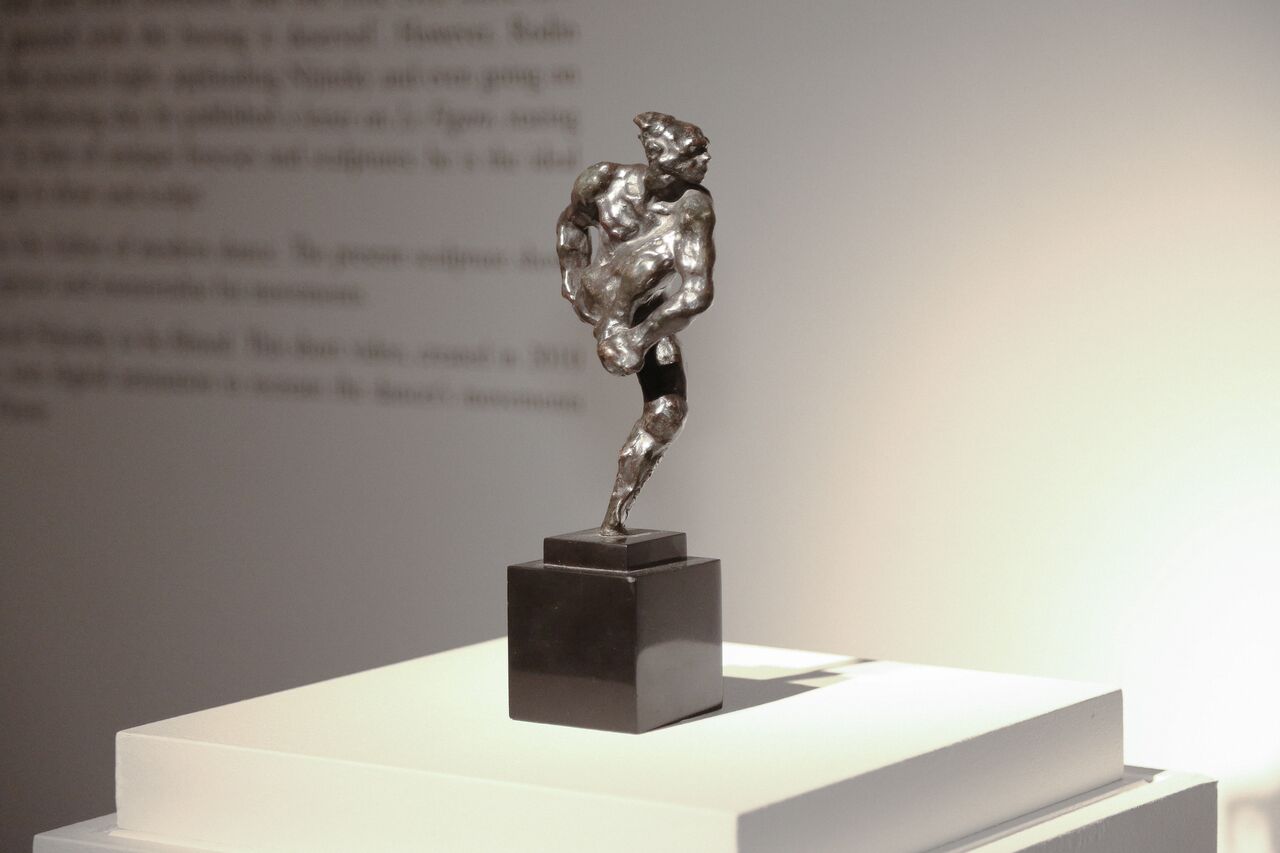 We also showcase three works from the later part of Rodin’s career such as his Mouvement de Danse figures. The artist’s late dance figures have enjoyed a marked revival in interest, particularly in the UK such as 'Pas de Deux – Mouvement de Danse Type G', conceived in 1911, showing dancers with exaggerated poses is an excellent example of Rodin’s later move towards abstraction.

To mark the 100th anniversary of Rodin’s death (1917), a programme of dedicated exhibitions has been organised at institutions around the world, notably Rodin: The Centennial Exhibition at The Grand Palais, Paris (22 March – 31 July 2017), Versus Rodin: Bodies Across Space and Time at The Art Gallery of South Australia, Adelaide (4 March – 7 July 2017) and Rodin at The Met at The Metropolitan Museum of Art, New York (17 September – 18 January 2018). Rodin and Dance, “The Essence of Movement” The Courtauld Gallery (20 October 2016-22 January 2017) and Rodin: The Birth of Modern Sculpture, Bowman Sculpture (7 June – 27 July 2017). 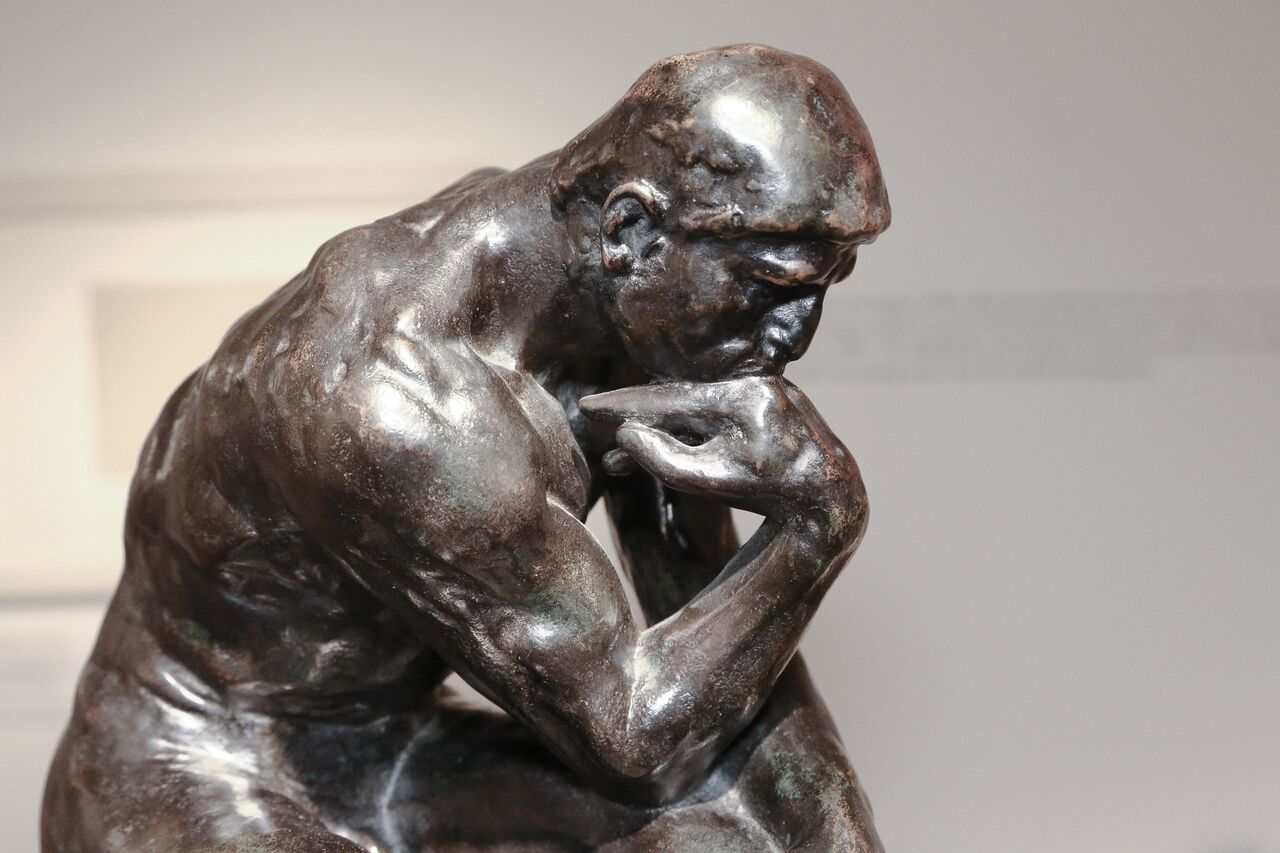 While Rodin’s importance as a sculptor means that his work is a feature of almost all the major museums in the world, the nature of his output, working in bronze editions as well as making multiple works in marble and plaster, has ensured that there are still significant amounts of his sculpture available to the collector.

The availability of Rodin’s sculpture is essentially down to the sculptor’s desire for as many people as possible to enjoy his work. Rodin modelled all his works in plaster and then gave the plaster to a bronze foundry to make a mould of the work, to produce an edition in bronze. During Rodin’s lifetime, if you wanted to own a particular work you would approach Rodin or one of his agents and request a cast of the work. Rodin would then authorise the foundry to make a bronze from the plaster version he had given them. These are what we term ‘lifetime casts’ and simply put, a lifetime cast is a work that was produced with Rodin’s authority while he was still alive. Certain very popular works were given, with the rights to cast, to a specific foundry. The best known of these is the Barbedienne Foundry who purchased the rights from Rodin for models including 'The Kiss' and 'Eternal Spring' and sent Rodin a commission for each cast they made.

By 1916 Rodin knew his health was starting to fade and he became very concerned that his work would stop being cast by his foundries once he had died and his place in art history would therefore be diminished. He was also very concerned that unauthorised bronzes and copies would appear on the market without a control mechanism in place. To this end, he negotiated with the French government for his studio to become a museum and that on his death all the rights to his works would pass to that museum. The directors of the museum then took over the responsibility for bronze casts of Rodin’s works to continue to be made. Therefore after 1917 bronze casts of Rodin’s works were still made using the same moulds made from the same plaster models that had been supplied by Rodin. In the case of works produced by the Alexis Rudier foundry, which had the right to cast certain models from 1902 to 1952, the only difference between a cast made in 1917 and one made in 1918 was that the former was authorised to be cast by Rodin and the latter was authorised to be cast by the Rodin Museum. 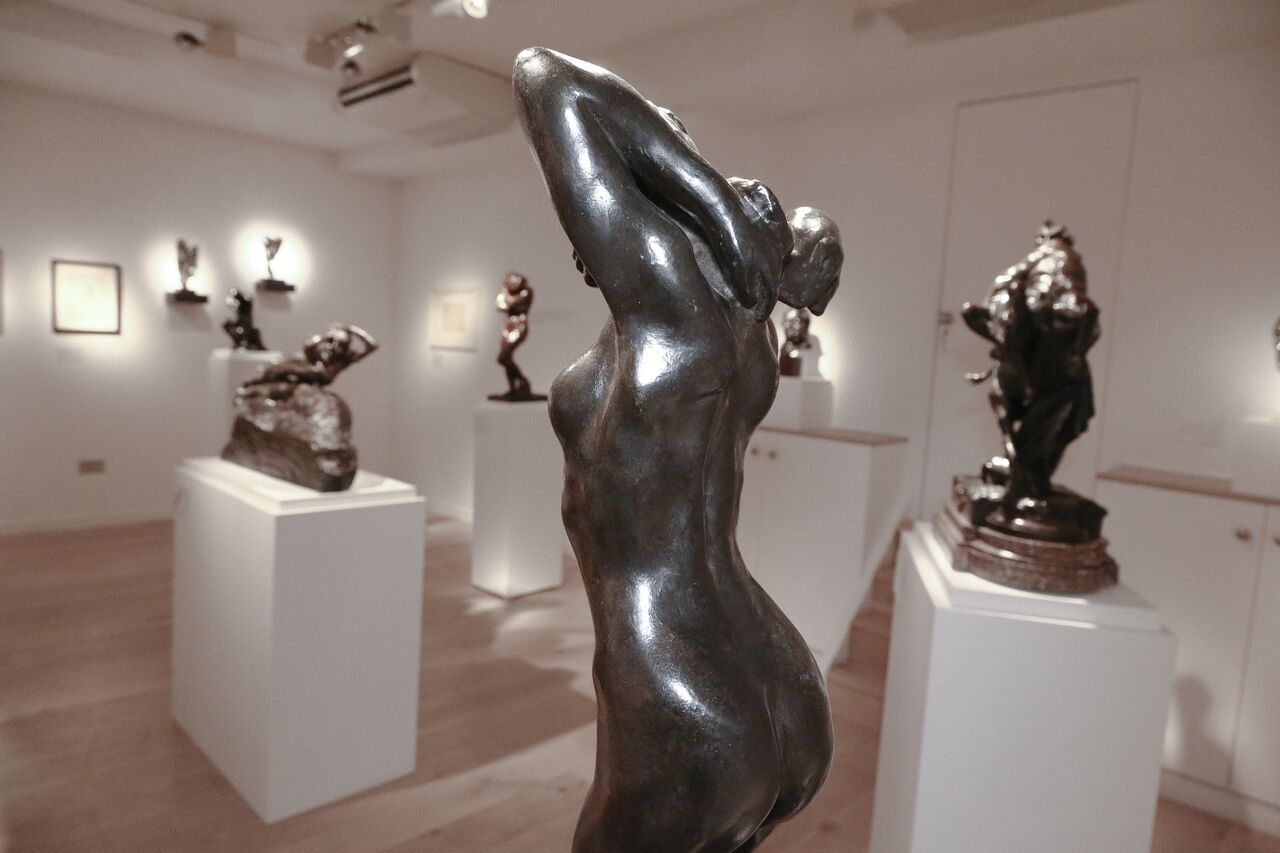 This situation continued until 1952 when the last contract with a foundry agreed by Rodin himself came to an end. After this date the Rodin Museum agreed that any further editions would be limited to 13, an edition of 12 and one cast for the Museum itself. It is at this point that the Museum looked to its huge inventory of sculptures left to them by Rodin, all with his express permission to be cast in edition if there was the public demand. These casts are known as Museum casts and in general, have the inscription copyright Musée Rodin. There will of course always be a special value placed on bronzes cast during Rodin’s lifetime. The differences between the castings of all periods are, however, tremendous, and there is no formula for acquiring a great cast. Some of the bronzes made in the 1920s and ‘30s for example are superior in quality to casts from the same mould made by the same foundry in Rodin’s lifetime. One must remember that Rodin did not physically make any of the bronzes or indeed supervise their casting; he was simply too busy sculpting. So the quality of the bronze was down to the diligence and talent of the foundry workers who produced them. The key for the collector is to find a fine cast and this has many factors including the detail of the surface and the tones of the patina. Some models are only available to be bought by collectors in an edition authorised by the Museum, as Rodin himself simply did not get some of his works cast in bronze. A good example of this is the magical sculpture of 'Nijinsky' that Rodin left, in plaster form, to the Museum on his death, but was only cast in bronze for the first time in 1958. Finally we must mention the fine work of Jerome Le Blay and the Comité Rodin. The Comité is a wonderful source of archive and expertise material, which has helped establish and stabilise the Rodin market. All works we offer for sale are sold with a letter from the Comité confirming the provenance and authenticity of the works.

Iain Michael Brunt has spent over 35 years in the art and antiques world in London, New York and Paris. Having started his career under the guidance of Daniel Wildenstein in his galleries around the world. He quotes ‘My art career started by being surrounded by some of the greatest works by Rodin and continues with this show which I hope you will enjoy’. He founded the art and antiques website www.antiques.co.uk and subsequently gonemodern.com for contemporary art.