Where I live it is an amazing season for autumn fruits and berries. Throughout the garden shrubs and trees are embroidered with natural jewels, producing a more colourful display than the spring and summer flowers that preceded them ever did. Some are already ripe and are proving appealing to wild birds; others will shine on into winter. In most cases berries are seen as a bonus, but when you get a good display you realise that they are most certainly the main feature. 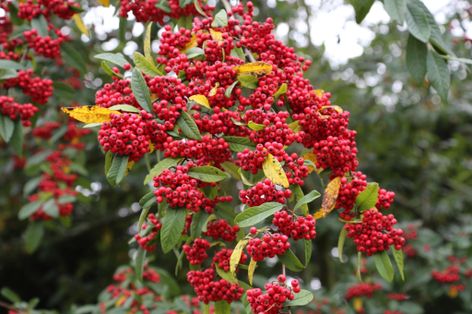 Pyracantha is one shrub that is most certainly planted for the fruit: showy berries in shades of scarlet, yellow or orange.  The firethorn, as it is commonly known, is a tough thorny shrub of sprawling habit that lends itself to being trained against a wall or fence.  Left to grow most produce tall arching branches carrying small deep green shiny evergreen leaves. Clusters of white single flowers in spring develop into the fruits which ripen from early autumn onwards. Pyracantha grows on any soil in sun or shade but fruits best with a reasonable amount of sunlight. To display the berries to advantage shorten back the new growth to just above the fruits in late summer; something like summer pruning an apple tree. 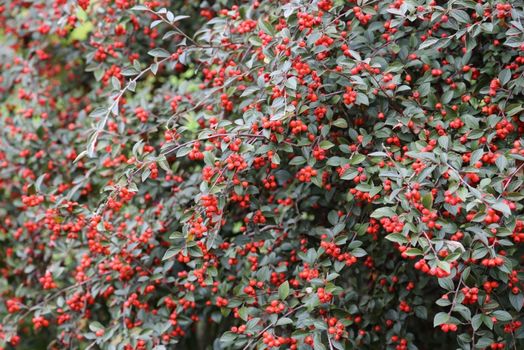 I often extol the virtues of cotoneasters; they are such tough, rewarding plants that thrive just about anywhere. They are some of the best shrubs for wildlife: bee friendly in spring and bird friendly in autumn. Cotonester franchettii is a personal favourite with its graceful arching habit and orange-red berries that spangle the branches through autumn.I have one planted with Prunus serrula with its wonderful mahogany peeling bark. The two plants make a stunning combination when the cotoneaster is decorated with its jewel-like fruits.

Cotoneaster ‘Cornubia’ is a big one; wide spreading branches and open habit with willow-like semi-evergreen leaves. Clusters of white single flowers are followed by big bunches of scarlet berries in autumn. This year they weigh down the branches of the planting my garden making a spectacular backdrop for a white-barked birch. 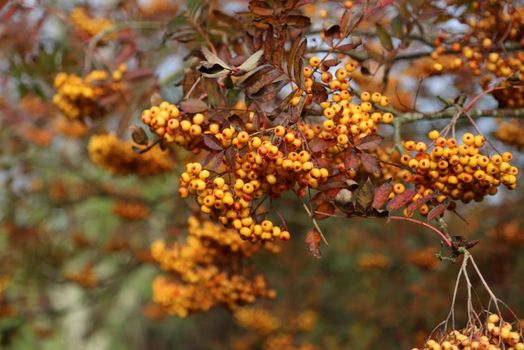 Cotoneaster salicifolius is a wonderful ground cover shrub that develops into a low spreading mound: perfect to cascade over a retaining wall or on a bank in sun or shade. The small narrow leaves are deep green and the berries bright red in dainty little clusters.  I have it alongside the drive and I love to see it covered with frost. The combination of deep green, bright red and glistening white is really stunning.

Sorbus aucuparia, the mountain ash has been loaded with fruit for weeks now. Different varieties ripen over a long period. The orange-red berries of the wild species were spectacular when I visited Wales in September. Sorbus aucuparia ‘Fructu Luteo’ is just at its best in my garden right now. I know the berries must be nearly ripe because the blackbirds are starting to frequent the branches to help themselves to a juicy snack. 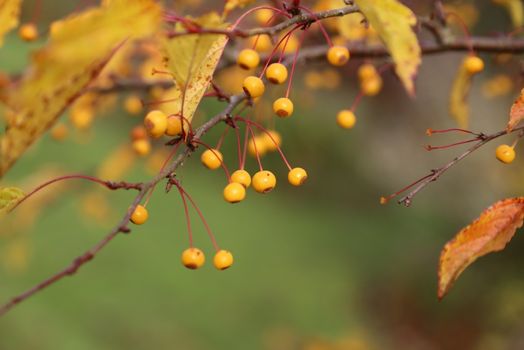 Although the sorbus berries are spectacular and wonderfully opulent on my tree the fruits I love most of all in late autumn are the tiny golden apples of Malus transitoria.  This is a dainty spreading tree with cut leaves that turn golden yellow. As the foliage alls away the small, perfectly spherical shining fruits are revealed along the tan coloured stems. Their fresh waxiness is a contrast to the shrivelling brown apples on the branches of Malus ‘Golden Hornet’ whose fruits just do not improve with keeping. 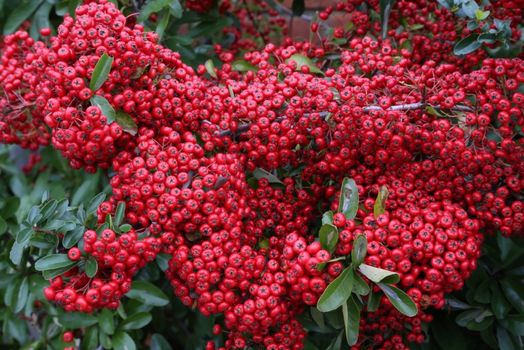 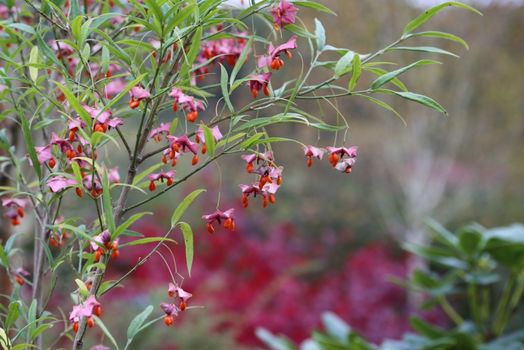 Many euonymus produce some of the most fascinating and spectacular autumn fruits. The European native Euonymus europaeus colours hedgerows at this time of the year with fall leaf colour and fascinating pink-red seed capsules that split to reveal bright orange seeds. This is commonly known in England as skewer wood or spindle. It has tough straight twigs which have been used in the past as meat skewers and spindles for spinning wool. It is at its best on alkaline soils and is ideal to include in a mixed, country hedgerow. The variety ‘Red Cascade’ has particularly fine fall leaf colour and plenty of large, showy fruits.

I am very fortunate to have two small specimens of the exquisite Euonymus cornutus in the garden. This is a small, slender shrub with sparse narrow leaves.  I have to say for most of the year it is rather unprepossessing but when those pink fruits appear in autumn, and then split to reveal bright orange pendent seeds, the plants are transformed into something really magical. I posted a picture on twitter which prompted the comment: “Isn’t nature wonderful”; how very true. 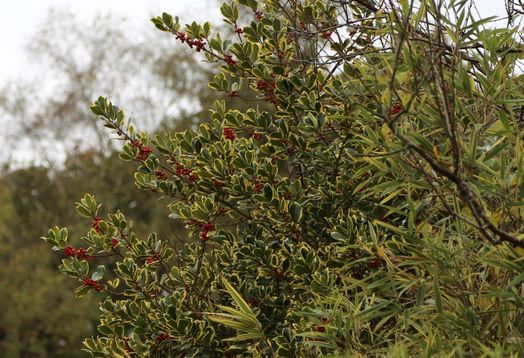 The fruiting hollies are putting on a great show and there are more berries this year than we’ve seen for a long time. I start on a round of Christmas demonstrations next week and I look forward to using some of the berried sprigs from my garden. When they are this good in late autumn I wonder if they will still be as abundant for the holiday season? Hopefully the birds will leave some alone and save then for a New Year feast. A large Ilex x altaclarensis ‘Golden King’ which is at the back of a line of screening shrubs goes unnoticed for much of the year, despite its bold gold and green variegated leaves. However when loaded with scarlet fruits it lights up the landscape. 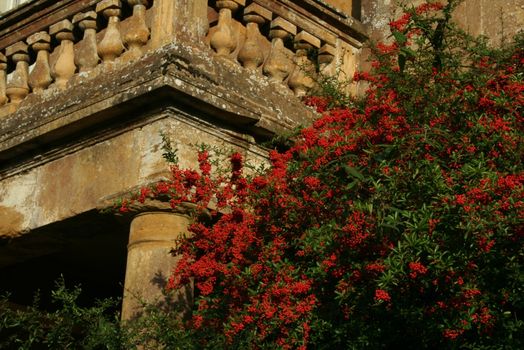 Many shrub and rambler roses produce wonderful shining hips. Rosa ‘Rambling Rector’ has loose sprays of small orange hips that have not reached their full colour intensity yet.  One shrub rose I am always surprised by is the deep crimson Rosa ‘Gipsy Boy’ (‘Zieugernabe’). This always produces quite large showy hips that I know will last well into winter. 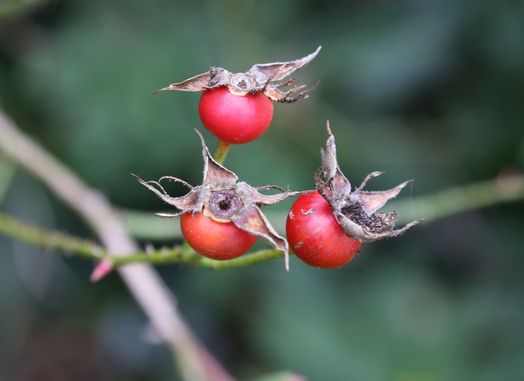