Every season in the garden has its highlights, however I always find those that appear in autumn some of the most heart warming and surprising. Maybe it’s the rich fall colours that seem to glow, even on dull days. Maybe it’s that lush burst of growth encouraged by morning dew and more frequent rainfall that displays those autumn treasures to greatest advantage. 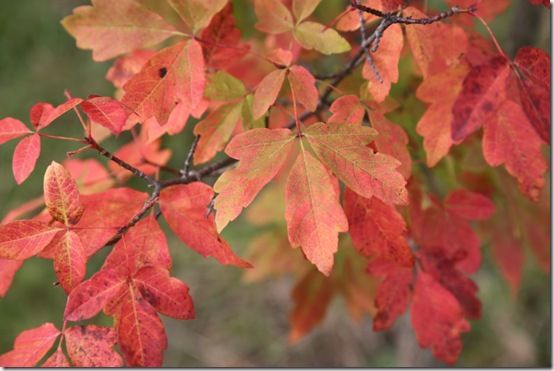 I seem to have the most amazing variety of fungi in the garden this autumn. These always take me by surprise when they appear from nowhere, often overnight. Quite unlike any of the other plantlife in the garden their delicate fleshy bodies suit life amidst the fallen leaves and vibrant green of the autumn which seems extra proud of its abundant chlorophyll. The most attractive are undoubtedly the Fly Agaric; those fairy tale toadstools with white stalks and spotted red caps. 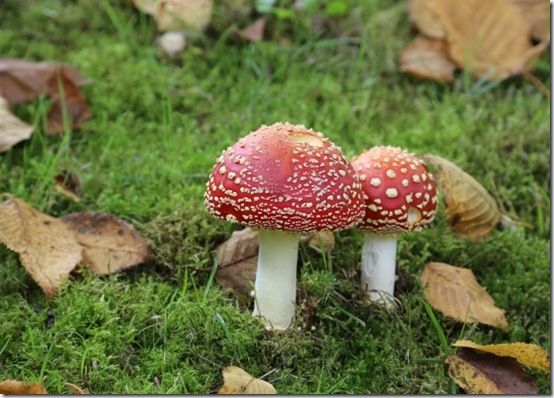 These have colonised the slope beneath one of the white-barked birches. I know these are fairly poisonous and I’m very wary about gathering any wild mushrooms or toadstools. However this year we seem to have a fair few field mushrooms on the pathways through the meadow. I’m confident enough to gather these and cook them; they smell unmistakably of mushroom and taste delicious. 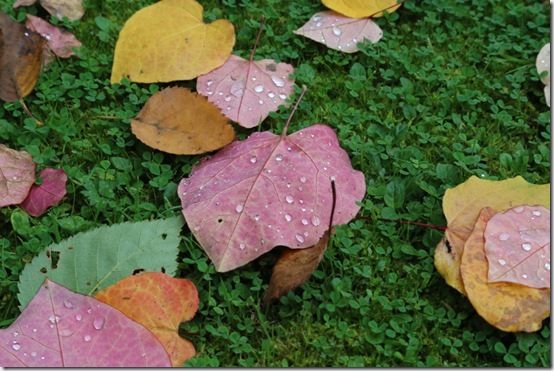 The leaves are starting to fall. The Cercis canadensis ‘Forest Pansy’ scatters its heart shaped leaves in shades of salmon-pink and gold creating a beautiful jewelled throw beneath its branches. I am almost reluctant to rake them up and take them to the compost heap they add such amazing colour to the garden picture.

It’s hard to tell if the fall colour is going to be really good this year. Some trees and shrubs seem to have just shed their leaves, others aren’t even thinking about it. However there are always those reliable subjects that perform regardless. Last winter I cut back Vitis coignettiae quite severely. 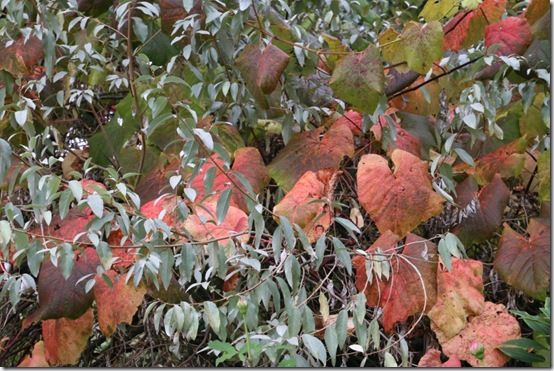 It retaliated and has romped over sorbus, elaeagnus and neighbouring shrubs with vigour and enthusiasm and is now showing off in shades of flame, salmon and gold. It is particularly effective entwined with the withering silver of Elaeagnus ‘Quicksilver’ which is about to shed its foliage. 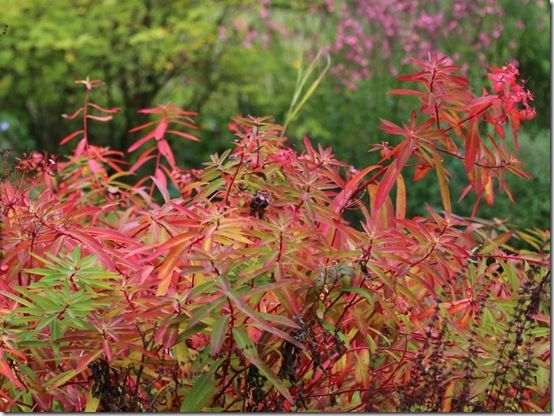 When Euphorbia grifithii ‘Fireglow’ does its stuff the fall colour is amazing and this is a good year. It has set fire to one end of a bed next to the meadow against a backdrop of diascia and cerise pink Aster ‘Alma Potschke’. 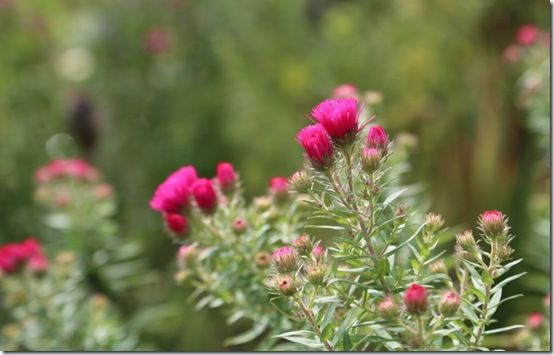 It’s even brighter than the stunning crimson foliage of Euonymus alatus. This is such a reliable shrub for autumn colour. Its stiff winged braches carry pleasing, but hardy striking light green leaves throughout spring and summer and then in autumn it steals the show. American gardeners may be holding up their hands in horror. This is an invasive species in some areas of the US where “burning bush” as it is known, competes with native species. I always find it amazing that an ornamental in one country can be a pernicious weed in another. 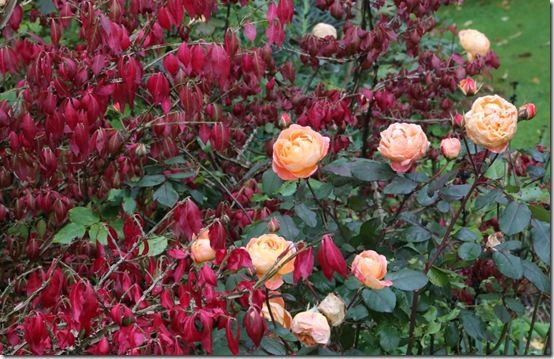 In my garden Euonymus alatus is plated with the soft orange English rose, ‘Lady Emma Hamilton’. I’ve raved about this variety many times before. It repeats well and is particularly good in autumn. The cupped blooms are glowing and fragrant and their shade suits the season. This year it seems to be far more prolific than any of the other roses in the garden. 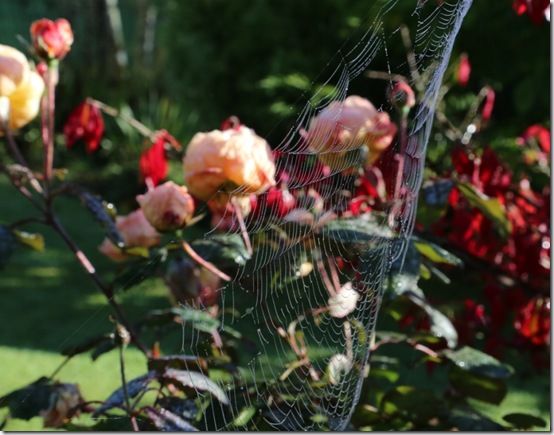 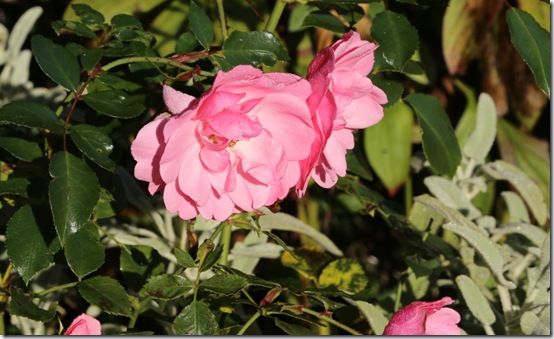 However ‘Bonica’ is set to outdo it in the next few weeks. Its sugar pink blooms are so weather resistant and do not suffer from the spotting that affects most roses in the damp, dewy days of the season.

I am a great fan of cotoneasters. These are great shrubs for the wildlife friendly gardener. The single white flowers are a valuable nectar source in spring and the berries are enjoyed buy the birds in autumn. I have a number of self seeded plants of Cotoneater horizontalis, the herringbone cotoneaster. 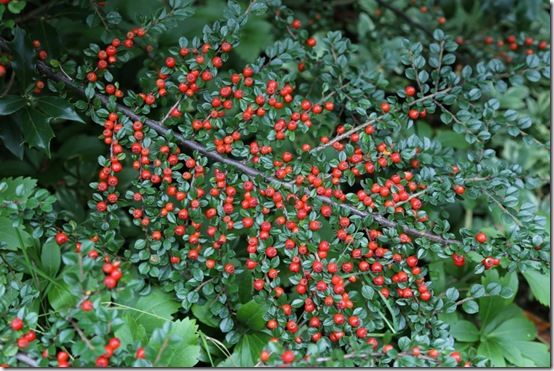 These have conveniently appeared in a shaded bed below a low wall in amongst ground cover planting of cotoneaster. At present they are studded with sealing-wax scarlet berries against dark green foliage. The leaves with shortly colour vividly; wonderful against the evergreen pachysandra. They have appeared around the bird feeding station so I expect our feathered friends brought in the seed; maybe their attempt at growing their own.

Certainly if we can tempt the birds to try some fresh organic produce this year the sorbus are loaded with berries and the branches of malus, crab apples are weighed down with fruits. I noticed today that the tiny golden fruits of Malus transitoria have coloured and the scarlet rounded crab apples of Malus hupehensis are gaining colour intensity. 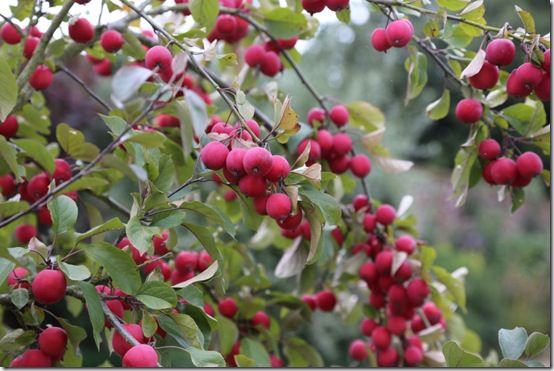 If I had to choose one shrub, or genus of shrubs, above all others it might have to be the hydrangea. Even the ordinary mop-head hydrangeas excel with their length of flowering period and the changing face of their blooms over the months. For me they are at their best in autumn when green and soft fabric shades spread through their florets. The brighter colours fade to something far more sophisticated and beautiful before they turn parchment in winter. For flower arrangers this is the time to cut them and dry them to preserve their faded beauty. 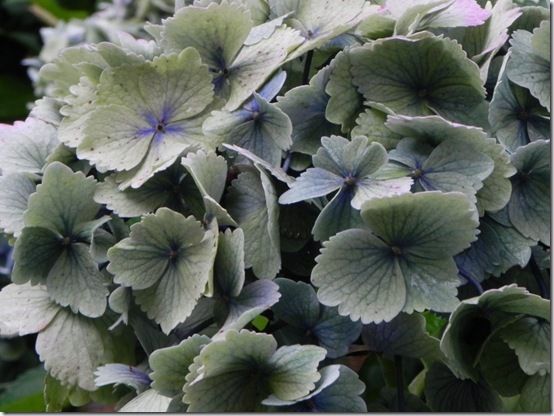 There are so many treasures in the autumn garden, and so many more to come over the next few weeks. Enjoy autumn and #fallintogardening