For those living in tropical regions plants with big, broad leaves are nothing unusual. Luxuriant foliage abounds, much of it evergreen. For those of us living in cooler climates big leaves are something of a novelty They are a stark contrast to the smaller neater foliage of most trees, shrubs and perennials.

In gardens they can be used to create dramatic exotic effects. They are often good at providing shade and their architectural form suits contemporary planting schemes. 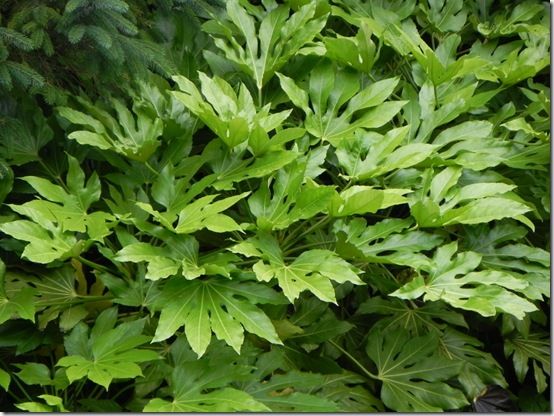 Probably the best known shrub that fits the bill is the false castor oil plant, Fatsia japonica. The large, glossy hand shaped leaves are evergreen, so the plant is a feature throughout the seasons. Fatsia is at its best in shade; the leaves are darker and greener. Fatsia grows well in a large pot which makes it ideal as a statement in a small garden or courtyard.  After a few years Fatsia can become tall and leggy with bare stems and all the foliage at the top. Don't be afraid to cut it back hard in early spring; it will respond with vigorous growth and larger leaves. Structural white flower heads appear at the tips of the shoots in winter. 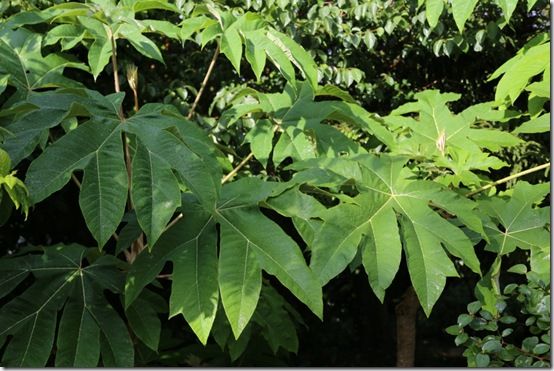 Somewhat more exotic Tetrapanax papyrifer has even more amazing foliage. The leaves are large, hand shaped, pleated as they open with prominent lobes and a chestnut bloom on the underside and around the margins. It is perhaps not as hardy as Fatsia and at its best in a sheltered position in sun or semi-shade. 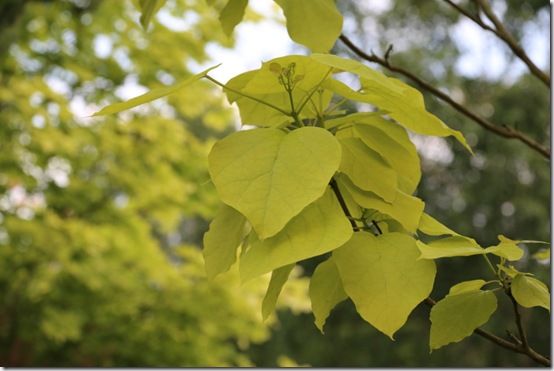 The Indian bean tree is well known for its large heart shaped leaves. The coloured foliage forms are the most popular and the golden leaved Catalpa bignonoides 'Aurea' the most widely grown. Left to grown naturally it forms a small spreading tree, with an architectural framework of branches and spikes of foxglove-like white flowers in summer. If pruned hard in winter, either as a standard or a shrub, it responds with upright shoots and even larger luxuriant leaves. Catalpa makes an excellent shade tree even if it is relatively late into leaf. Keep it small by growing in a large container. 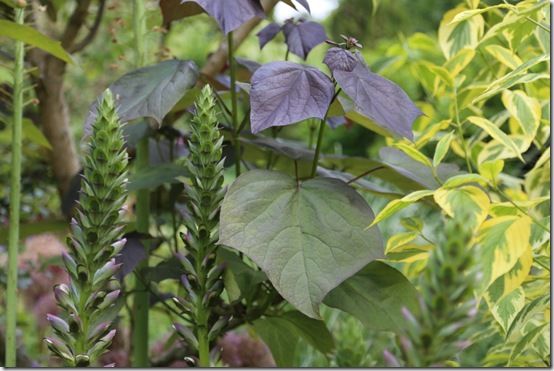 The purple leaved Catalpa erubescens 'Purpurea' can be grown in the same way. The leaves are slightly more angular in outline, purple-green at first, becoming deeper purple, especially at the tips of the shoots. It is best pruned in winter, even when grown as a standard tree to improve foliage quality. A stunning subject to add height to a planting of hot colours, perhaps hemerocallis, crocosmias and cannas. 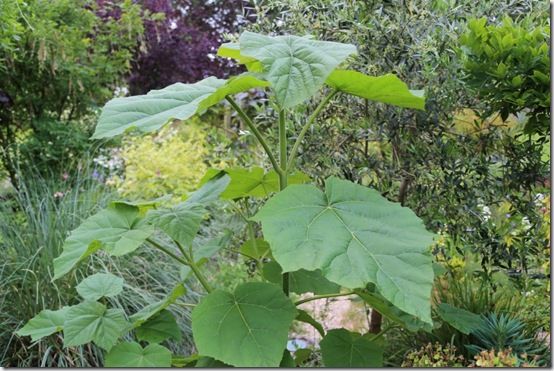 Paulownia tomentosa is often referred to as the foxglove tree for its spikes of lilac blooms that appear in late spring or early summer, often before the leaves are fully developed. Left to grow naturally it forms a large tree with heart shaped green felted leaves. If pruned hard down to 30 cm (1ft) or so it responds with vigorous growth and enormous green leaves. This is the ultimate woody plant for exotic effect; a must for any tropical planting scheme. 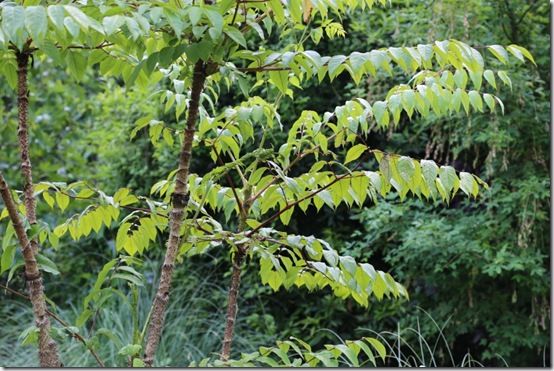 The large, complex leaves of Aralia echinocaulis appear like branches atop thorny upright stems. This deciduous suckering shrub has the appearance of an exotic small tree and adds lighter height than the large broad leaved subjects mentioned so far. The leaves turn to shades of gold in fall leaving curious thorny rods rising from the ground through winter. The growing tips can be damaged by hard frost but the plant usually shoots from lower down the stems and recovers quickly in spring. My plant came from Hunting Brook, Jimmy Blake's garden in Ireland; he introduced it to cultivation. 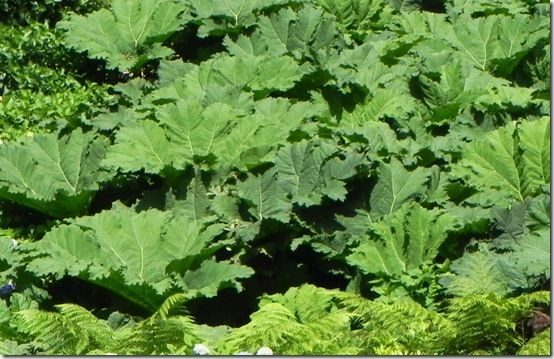 There are a number of herbaceous perennials with big, bold foliage. The most dramatic of all Gunnera manicata, a native of Brazil is hardy in temperate regions, especially if it is covered with the cut off leaves in winter. The leaves are like huge umbrellas; 2 metres (6ft) or more tall with an individual spread of 1metre (3ft) or more. It is at its most magnificent in wet fertile soil and is definitely a subject for the larger gardens. 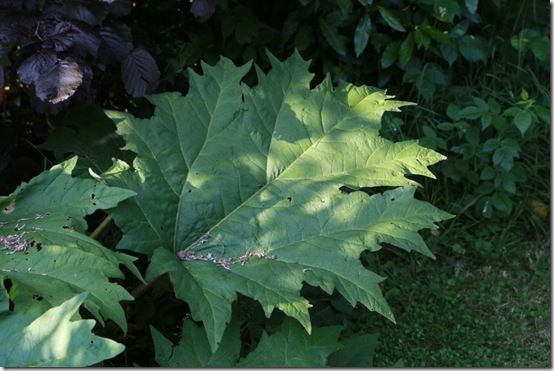 The ornamental rhubarbs, cultivars of Rheum palmatum, are a little smaller in stature, but no less impressive. The architectural leaves are carried on thick stalks which are often red-flushed. The inflorescences rise high above the foliage and shed like confetti when they fade. Although some disagree I think the leaves remain in better condition if the flowers are removed before hey fade, at least it prevents them from shedding all over the foliage. There are many varieties, choose one with serrated, toothed-margin leaves for best effect and plant in moist, fertile soil. 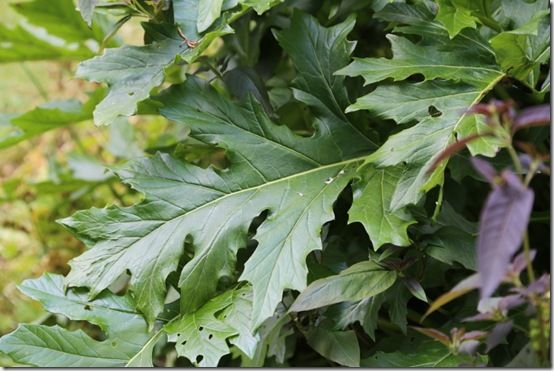 Acanthus mollis, commonly called bear's breeches, has wonderful arched, toothed leaves that were the inspiration for the Corinthian column of classical architecture. It grows in the woods around the Alhambra and throughout the ruins of Ancient Rome. It thrives in sun or shade and once you have it you will never be rid of it because it propagates from fragments of roots; dig it out and they replace it. The foliage is deep green and softly shining and evergreen in milder areas. The flower spikes are a dramatic addition in summer. 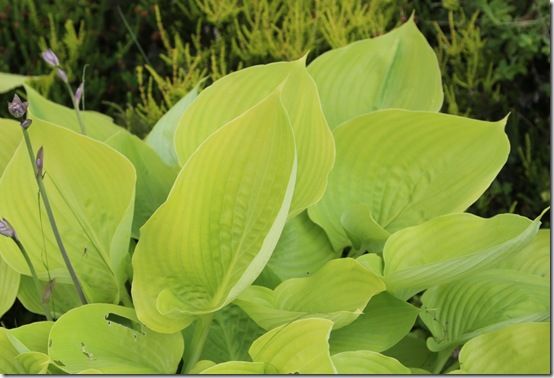 Hostas come in many shapes and forms from the diminutive to the large and luxuriant. The pale yellow-green smooth and sleek blades of Hosta 'Sum and Substance' are some of the most magnificent. This is a good hosta to grow in a large pot where the foliage is easier to protect from slug and snail damage. Strong spikes of lilac flowers appear in midsummer. At its largest and most luxuriant 'Sum and Substance' can grow to 90cm (3ft). 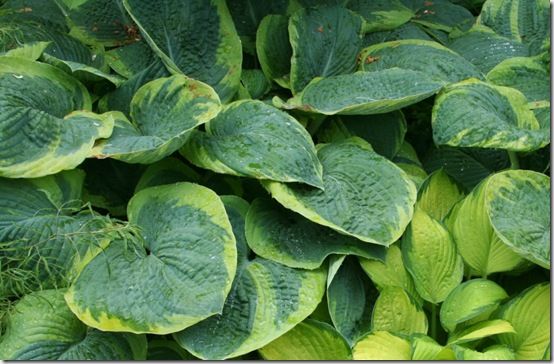 Blue green with ribbed leaves edged with gold the leaves of Hosta ‘Frances Willians’ are equally impressive. It forms thick clumps of strong stemmed foliage; showy white flowers are carried above the leaves in midsummer. As the leaves are blue-green and tougher than many hostas it is less prone to slug damage. Planted with Alchemilla mollis it makes impressive ground cover.