I first met the women behind BloomFringe Fest when I took a flying trip to Dublin the day after their fourth urban greening festival ended. After wandering around in search of a place to talk, we finally settled in a bar for a coffee. They were still basking in the afterglow of a successful weekend, keen to show off the model sheep called Siobhán they were carrying around for reasons I now can’t quite remember, and tell me about the successes of the weekend just gone - the local people they reached by setting out chess boards in the courtyard at Dublin Castle, the ‘random acts of greening’ that took place across the city, the secret garden tour with garden expert Dr Vandra Costello. There was no doubt about it, these were Women Who Make Things Happen. 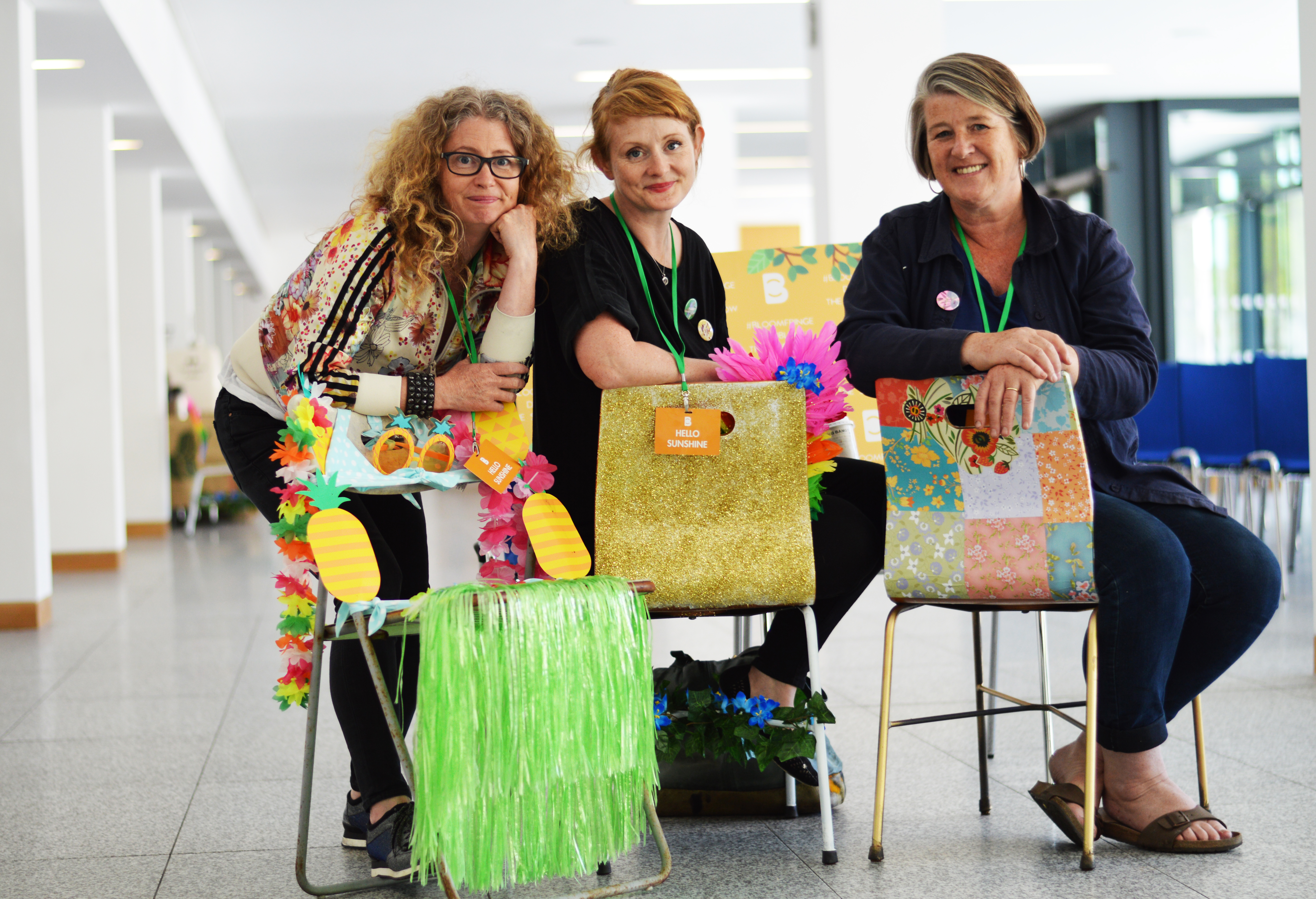 With four years of BloomFringe successes under their belts, landscape architect Esther Gerrard, garden designer Marion Keogh and glass artist and educator Róisín de Buitléar have reason to be buzzing. They have created an event in Dublin that is setting the standard for how to bring gardening to the masses in a way that is inclusive, fun and educational.

It all started in 2013, when Keogh and Gerrard’s paths crossed while they took part in Dublin’s Parking Day, an annual event where cities around the world turn parking spots into pop-up parks; it was clear even then that they had a mutual interest in turning unloved urban spaces into something special. Further meetings followed, and ideas brewed in both their minds, but the catalyst came the following spring when Keogh was at the annual Garden & Landscape Designers Association conference and heard Tim Richardson speak about the Chelsea Fringe Festival he founded in London. The idea of a fringe festival that was linked to but completely independent of a conventional garden show was a powerful one. Could Dublin be an outpost for the Chelsea Fringe Festival, now in its seventh year and spawning satellite events from Bristol to Italy? No, concluded Keogh, Dublin needed a gardening fringe festival, but it needed its own identity. 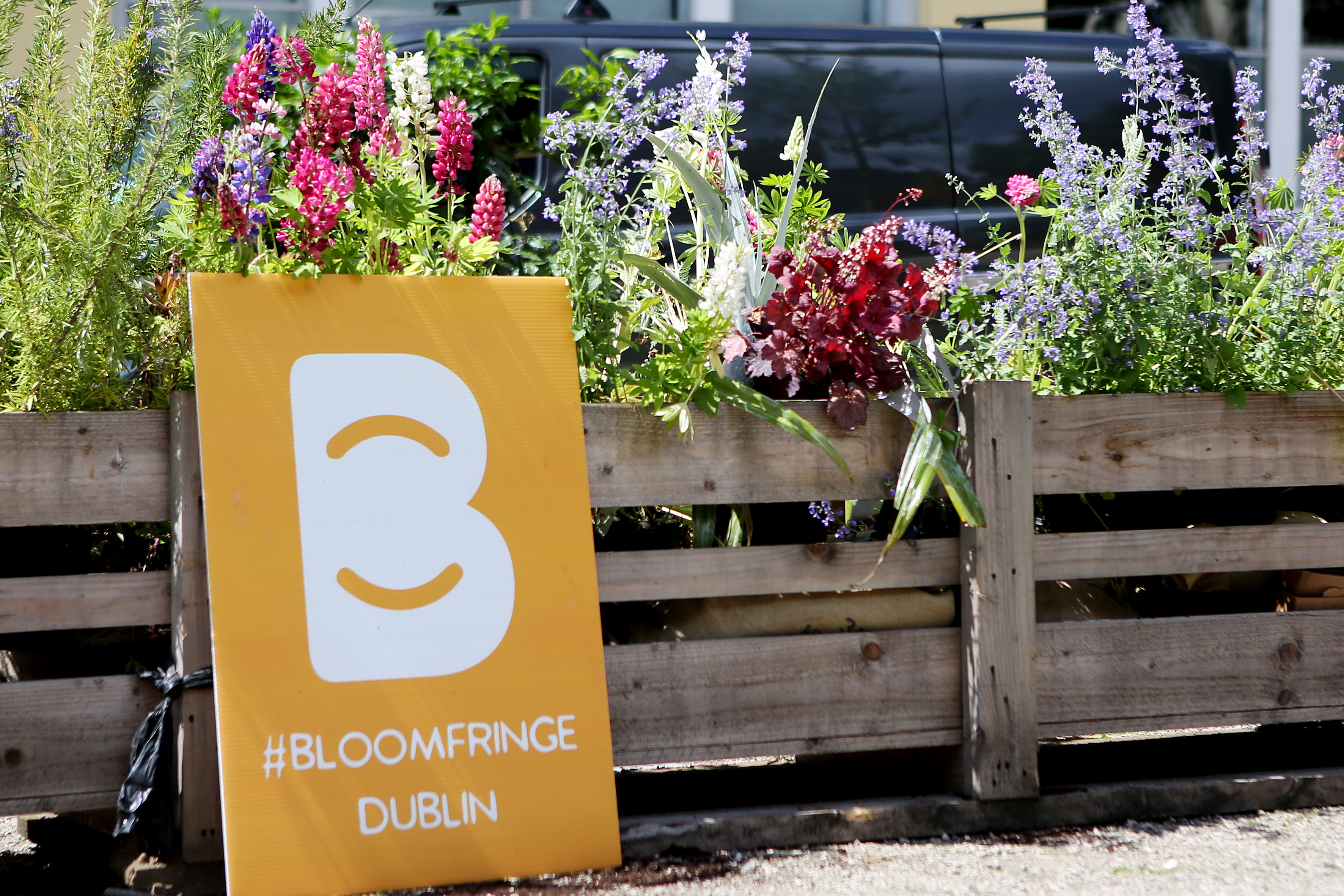 And so BloomFringe was born in 2014: the edgier, more inclusive cousin of Bloom, the annual gardening show that takes place in Phoenix Park in Dublin every spring. Bloom is now in its 10th year, and its organisers are Bord Bia, the Irish Food Board, with the what could uncharitably be called the usual suspects - big-name designers, specialist nurseries and the like - in attendance. BloomFringe had Bloom’s blessing but the two remained unaffiliated, allowing the Fringe festival free rein to forge its own identity.

BloomFringe in its first year was everything Bloom is not; unfunded, unofficial, unconventional. Keogh, Gerrard and de Buitléar each put in £1,000 of their own money to get BloomFringe off the ground in the face of a lack of funding, but more important than the cash was the sheer force of their will to succeed. From a standing start in spring 2014 came more than 50 BloomFringe events in 30 locations across the city, from talks on green roof technology and popup picnics to bee keeping workshops and foraging tours took place in that first year. It was diverse, it was educational, it was fun. 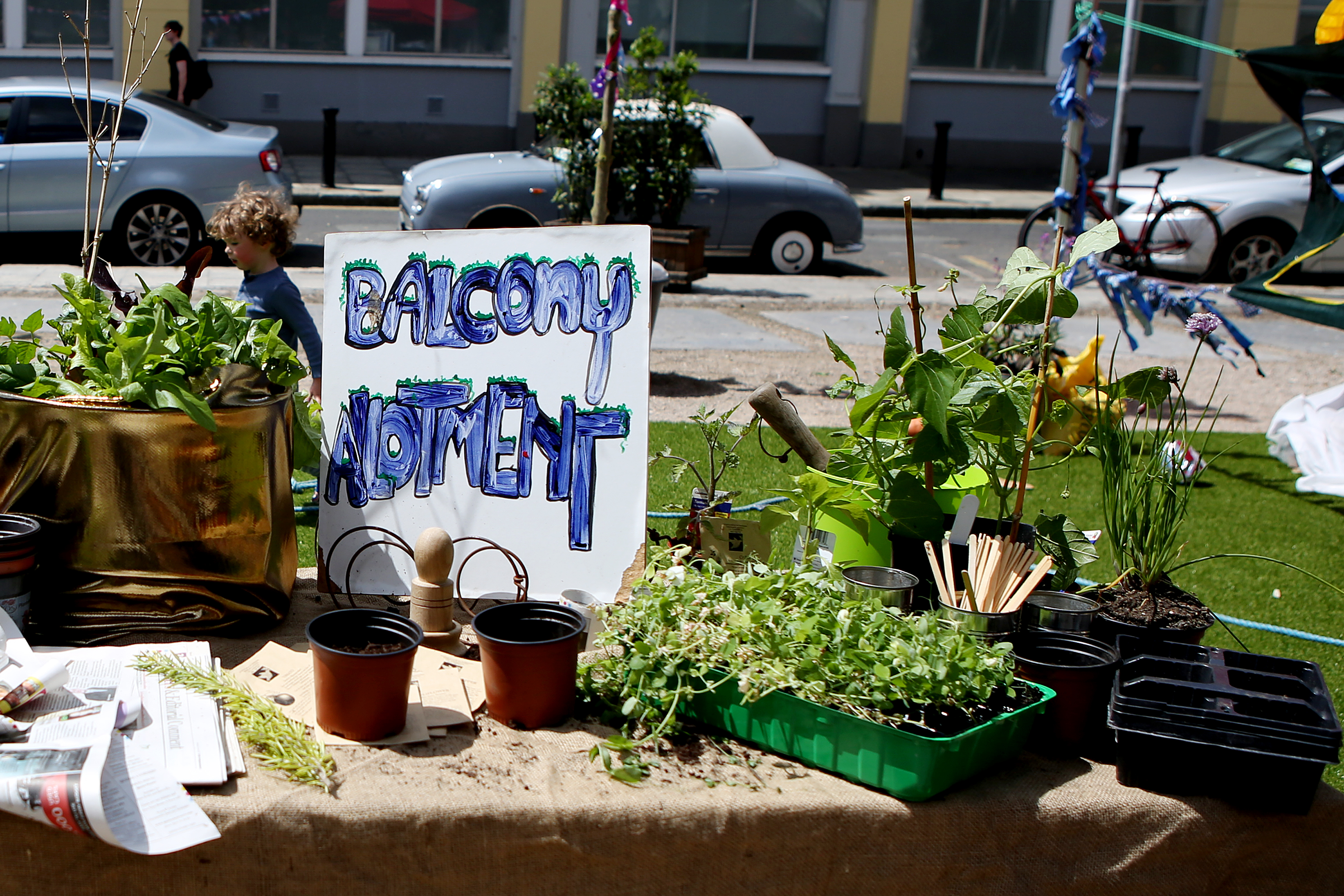 De Buitléar adorned the baskets of 60 Dublinbikes - the city’s bike sharing scheme - with mini-planters of flowers of herbs and a note to riders to “tweet your travel #BloomFringe #thymetravel”. It was a fantastic way to spread the word, both literally in terms of spreading free plants around the place, and also via social media, something the BloomFringe team have been masterful at utilising (check out BloomFringe’s Instagram and Twitter accounts for more evidence of this). Many of the events showcased things that were already happening in Dublin, highlighting community activities that were already working to encourage green spaces in the grittier parts of Dublin. It was the organisers’ skill in bringing all these diverse activities in one weekend that seems to be the secret of their success.

By year two they had secured funding from Dublin Council, and began to see lasting change from the initiatives BloomFringe had spawned. One of the festival’s pop up gardens was situated on waste ground on one of the main streets, a spot mainly used for men to urinate. “After its one-day conversion into a small beautiful park, the council saw it with new eyes and created a new seating area of it, which also houses a bike park. So we see that as a legacy of our intervention,” says De Buitléar. 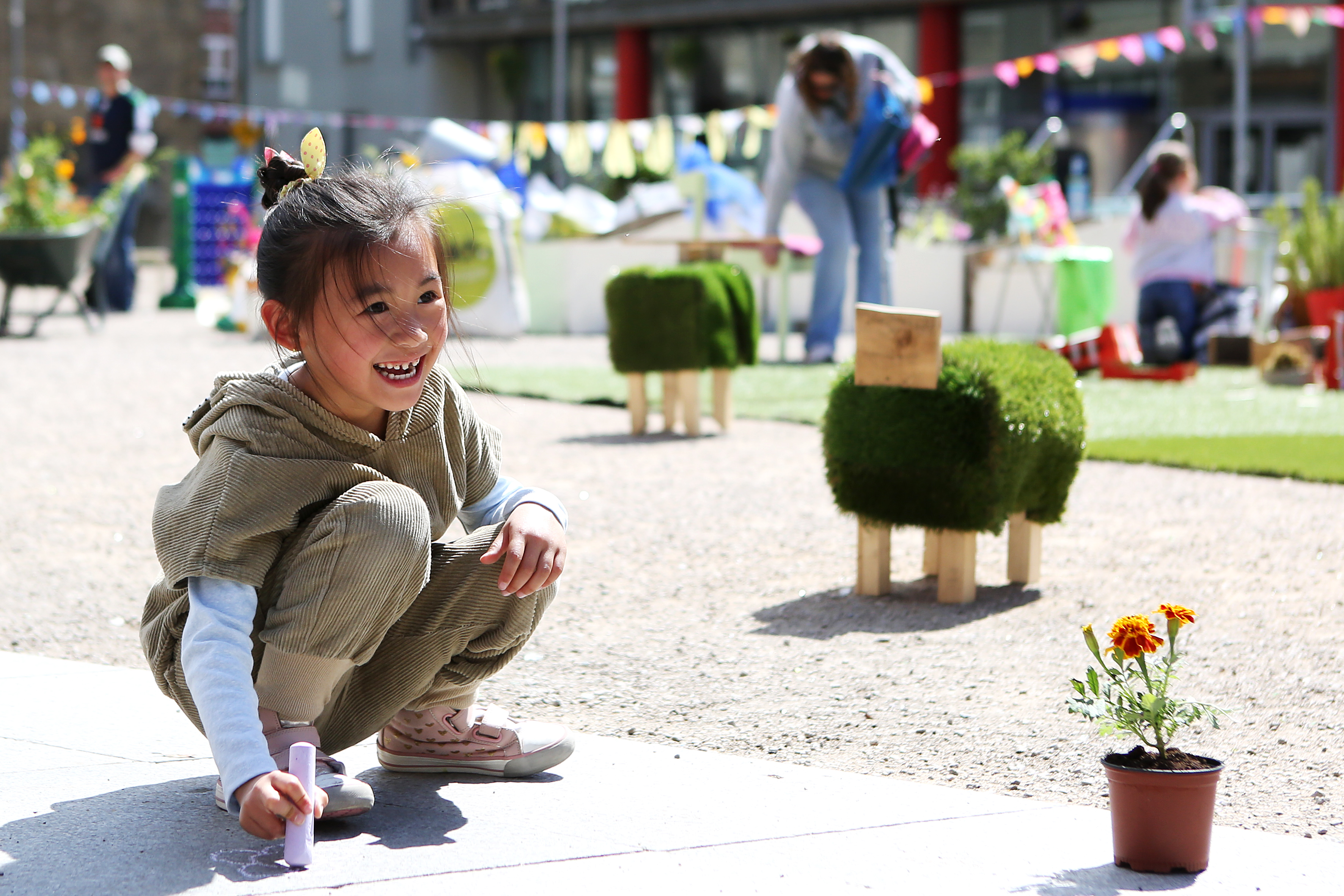 The option of corporate sponsorship of Bloom Fringe is one the organisers have rejected, preferring to seek public funding, but Keogh says choosing sources of funding for the future is an ongoing debate between the trio as the festival evolves from year to year. “Someone came to us once and said they could get us money from one of the drinks companies, they would love what you’re doing, but if we did that we would have a series of beer gardens all over the city, everyone would be drinking and nobody would be doing any gardening, so no, we’re not going to do that.”

I was left in no doubt that they will succeed, however BloomFringe is funded. Keogh, Gerrard and De Buitléar just ask, and things happen. Peter Donegan is a garden designer, Dublin dweller and presenter of the gardening podcast The Sod Show, which broadcasts from BloomFringe each year. “The ladies of BloomFringe have a lovely way of asking but there is only one answer. Literally, one day I was building a garden the next I was live on stage at Dublin Castle with Ron Finley,” he says. Ah yes, Ron Finley. Perhaps Bloom Fringe’s biggest coup to date came last year when they persuaded the gangsta gardener, the closest thing gardening has to a rock star, to travel from Los Angeles for a Bloom Fringe appearance. “Cheekily we just tweeted him and said do you want to come to Dublin for Bloom Fringe? and he said ‘who’s paying’? and we said ‘we’ll pay’”, That gained us a lot of attention worldwide especially in America,” Keogh notes. 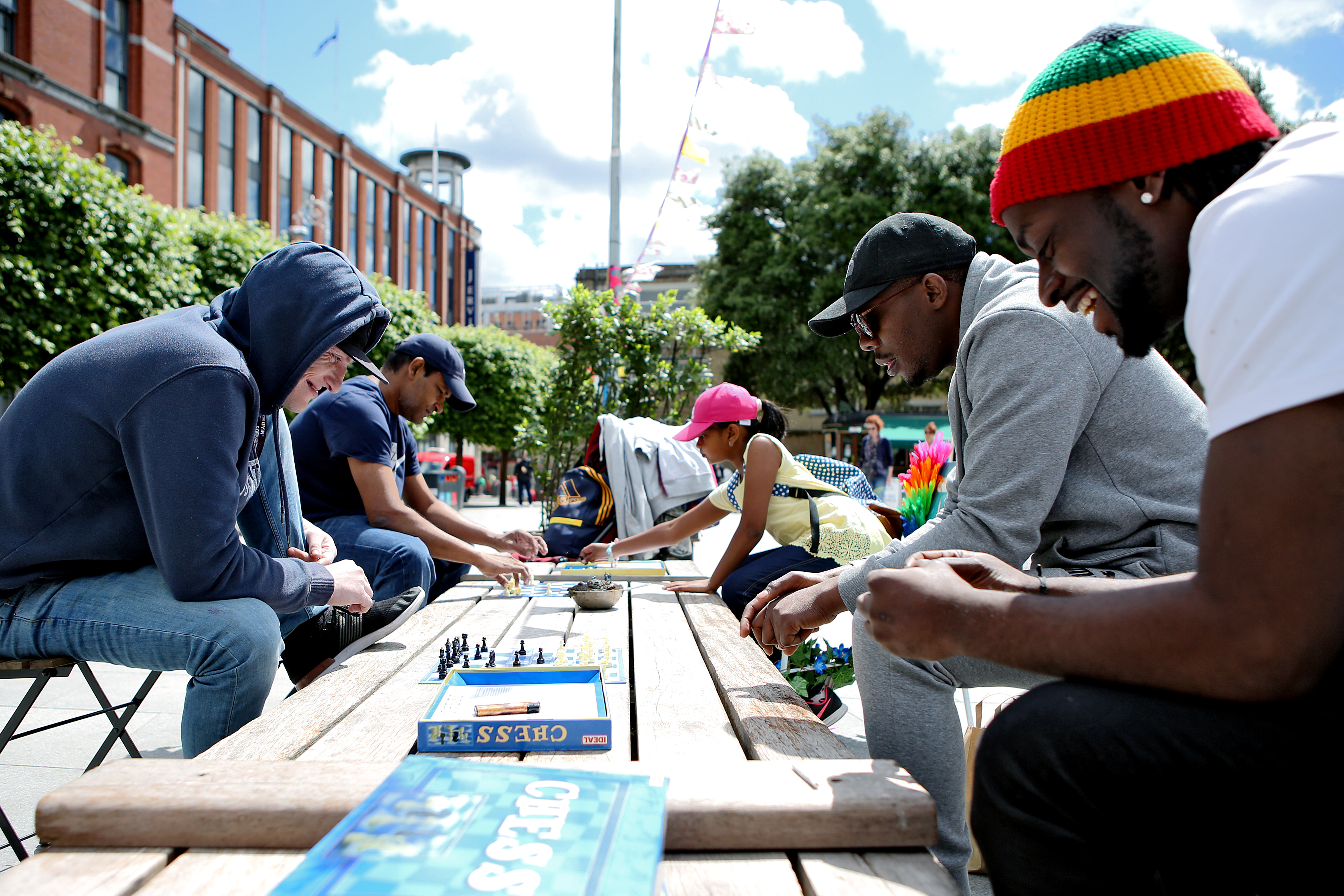 Every year the festival evolves: there is no allowance for resting on laurels. There’s a new theme every year, De Buitléar explains, which allows for trialling new ideas and keeps everything fresh. That's an important part of what we do, trailing things that can spark larger projects's leading to legacy projects being established. This year the theme was ‘play in the streets’, so they transformed a grey concrete-laden Wolfe Tone Square into a colourful, plant-filled, game-filled park with fun activities like grow and sow workshops for children and adults and putting up a “pasture” around the square’s cow sculpture into the bargain. In a bid to address a lack of public seating, local volunteers and artists upcycled chairs sourced from free trade websites and social media call outs and left them around the city for people to use in a project tagged #SeatingTheCity. “If you put loose seats in public places, people then occupy them differently,” Gerrard explains.

While all of this is no doubt a draw for the city’s many tourists, BloomFringe is really about the local population. “This is not just about having a pretty street corner which the tourists will walk by and be enchanted by - that’s totally part of the story but there’s way more to it than that,” says Keogh me. “We’re all about the people on the ground, empowering them and giving them the finance to able to have greening projects of their own.” 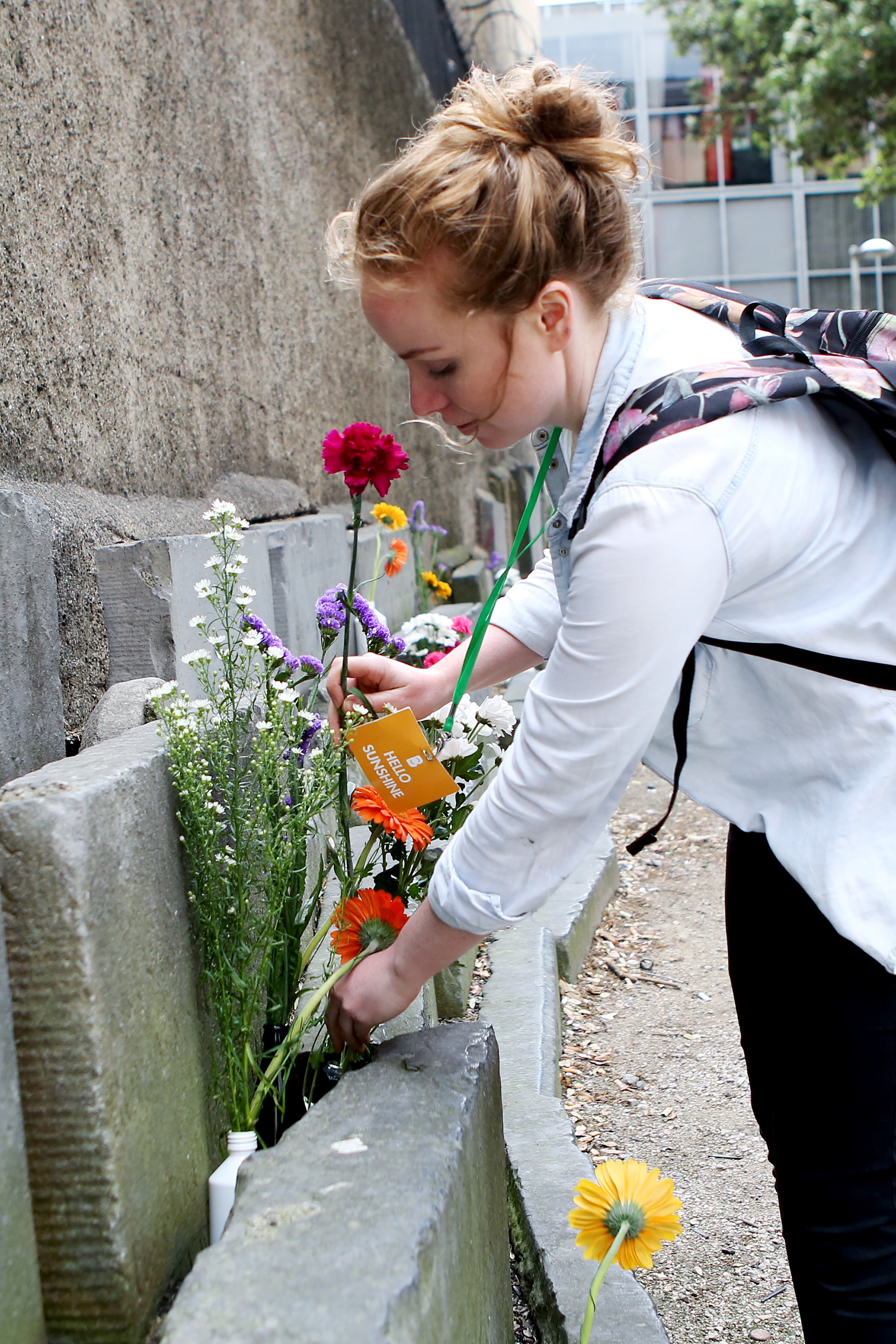 It will be fascinating to see what the women of BloomFringe do next, but for the moment it’s inspiring stuff for anyone who wants to make a change on their own doorstep. The message is this: you want change? Just get on and do it. As Gerrard told Peter Donegan’s Sod Show, “BloomFringe is about showing how easy it can change a space. You don’t have to drive miles away to find a nice park, the streets in our cities are the places where we should be able to hang out. It doesn’t take a lot of money, it doesn’t have to be a huge masterplan to make a change in the city. It can just be a windowbox, it’s putting a chair in a corner that doesn’t have one.”