Like many youngsters I was fascinated by carnivorous plants; Yes, I was interested in plants anyway, but the idea of a plant actually trapping insects for food made them all the more alluring. I remember getting my first Venus Fly Trap. It can in a little pot of moss with a plastic dome over the top; basically a pot of moss with a little hard corm in it and a rather crude coloured picture of blood red, toothed traps crushing an insect to death; wonderful. I was probably a bit disappointed to find that it only produced tiny, rather pallid traps under the condensation filled dome on my windowsill, but it was still quite amazing. Like many kids I probably exhausted it by prodding the traps and getting them to close. 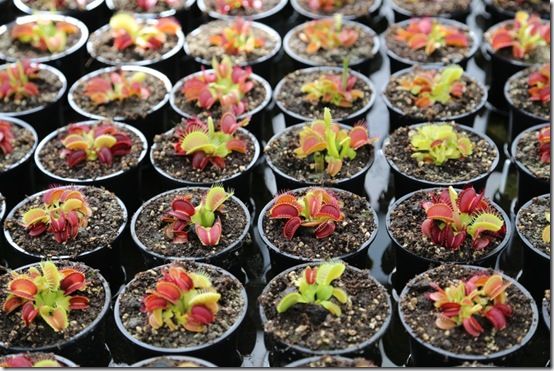 I almost certainly suffocated it by keeping it as warm as possible indoors on the windowsill, well way from any food source. Just as I imagined all bats were vampires, so I imagined all carnivorous plants were tropical. In fact the Venus Fly Trap, Dionaea muscipula is native to North America, within a 60 mile radius of Wilmington, North Carolina. It is now scarce in its native habitat due to devastatingly heavy wild collection. The one I had as a boy in a pot with a plastic dome was almost certainly wild collected. This is now carefully controlled, like most carnivorous plants the Venus Fly Trap is protected. It is an endangered species regarded in the same category as the Bengal tiger. 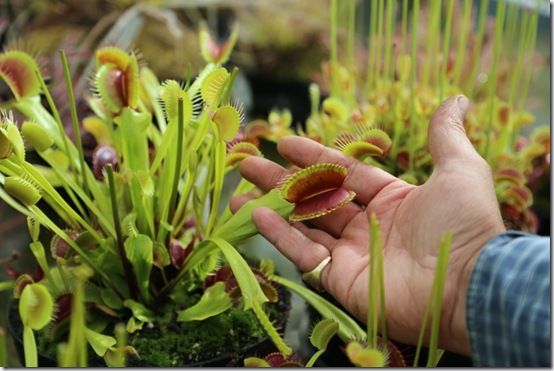 My fascination for carnivorous plants has stayed with me. I sought out sundews in the boggy areas of the New Forest, Hampshire, England as a boy and marvelled at the hanging traps of pitcher plants on trips to Kew Gardens and Oxford Botanic Gardens. Since then I’ve always marvelled at displays of them at RHS Chelsea Flower Show. In recent years those staged by Matthew Soper, Hampshire Carnivorous Plants. He’s been growing them for over 35 years and has 16 Chelsea gold Medals and over 100 Royal Horticultural Society Gold Medals; that’s quite an achievement. 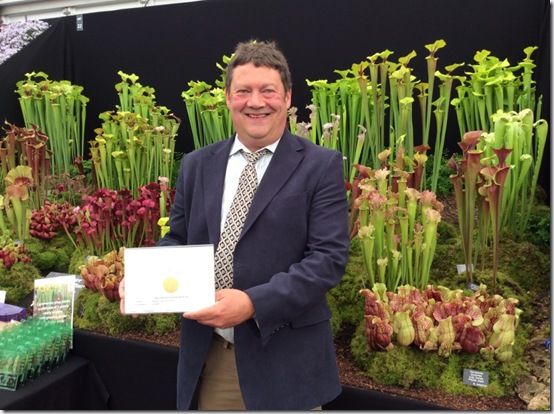 I paid Matt a visit at his nursery to find out more. Like me he was fascinated by carnivorous plants as a boy and started collecting them. Some of his fine specimens of sarracenia he’s had from the outset. As he says carnivorous plants are great for inspiring kids and young people: they bring together geography, botany and horticulture, but are not seen as gardening which can have a “middle-aged” image. 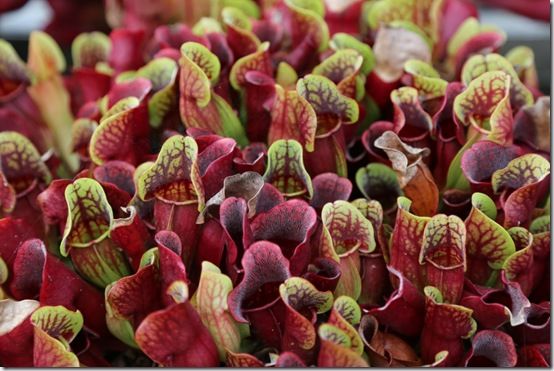 Many are very hardy and hail from North America, especially the trumpet pitchers or North American pitcher plants. These are undoubtedly some of the most impressive and spectacular. Rhizomatous perennials they occur from Texas through the Great Lakes area to South East Canada. They are herbaceous perennials like other carnivorous plants, so in temperate regions they die down and go dormant in winter. Their leaves are modified into tall tubular pipe-like traps which contain a narcotic nectar-like secretion. Insects fall into the traps and are digested. 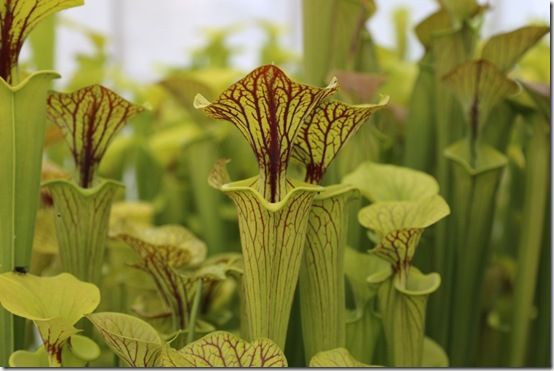 This highlights two important facts. One: that they die down in winter and lie dormant: so that’s why my Venus Fly Trap died; if I’d waited and not thrown it away it would have grown again the following spring. Two: they get their nutrients from digesting insects. This is really important because you must not feed them with conventional fertilisers. If you do they produce ordinary leaves and no pitcher traps. That’s why my sarracenia in the pond produces leaves and flowers and no traps: it is too well fed. 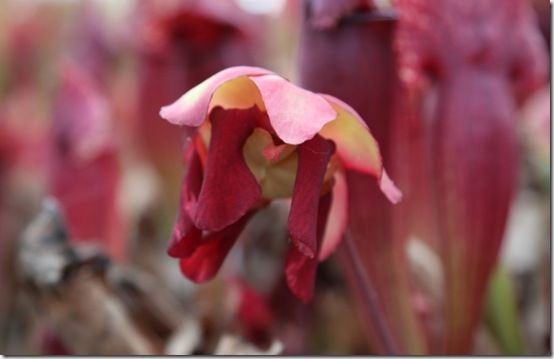 You need to grow them in peat and water with rain water; peat alternatives do not work. They are bog plants so it’s best to stand them in a centimetre or two of water all the time: drier in the dormant season. At Hampshire Carnivorous Plants Matt grows them in unheated glass with lots of ventilation on flooded benches. Humidity is high and it gets very warm in the daytime. He points out that they do not need regular “meals”. They trap insects when they are around and this food keeps them going. 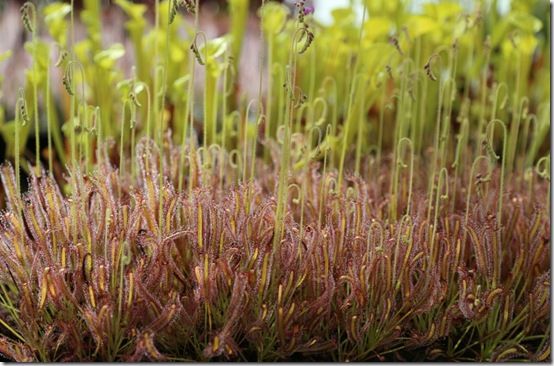 He grows mainly trumpet pitchers, fly traps and sundews. The latter, Drosera botanically have tiny hairs on their leaves which carry droplets of a sticky secretion that traps and digests the prey. These are widespread in different parts of the world. I loved on Australia species we were looking at with complex, stag’s horn leaves that create a fabulous cobweb effect. Matt suggests that some of these species would be ideal in hanging baskets for natural pest control in greenhouses and conservatories. 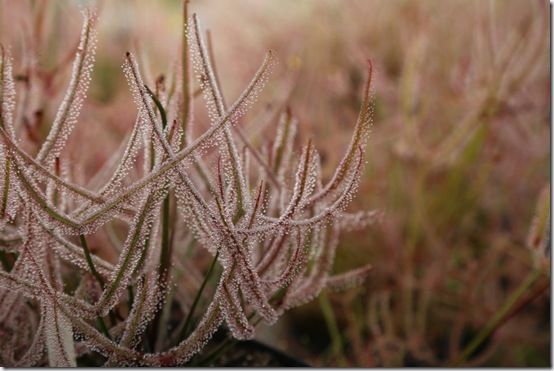 The pitcher plants, Nepenthes, with hanging pitcher traps are tropical in origin. These were popular in Victorian times and are more challenging to grow in terms of heat and humidity. Many are Indonesian jungle plants. They are more difficult for the non-specialist grower and certainly not something to try on your bedroom windowsill. They have been widely grown in Holland for the houseplant market, as are certain sarracenias which I would argue are far more decorative. 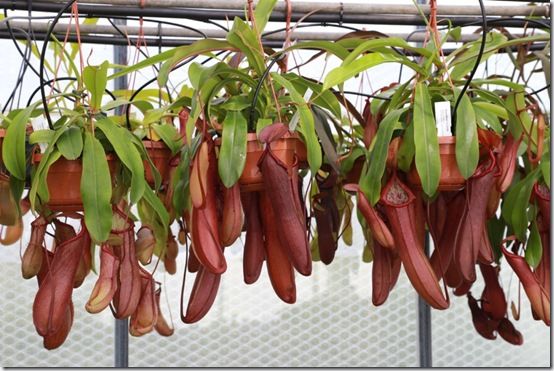 I asked Matt about hybridisation and breeding; he’s raised some of his own hybrids and produced plants with truly spectacular characteristics. I was amazed by the variety of form and markings in some of the sarracenias. It takes at least seven years from hybridisation to a variety being available to offer. You have to have an eye for selection: to pick out that plant with special colouring and markings. The delicate veining and markings on the traps in not just there for decoration: it is all about attracting insects and luring them into the trumpet pitchers. 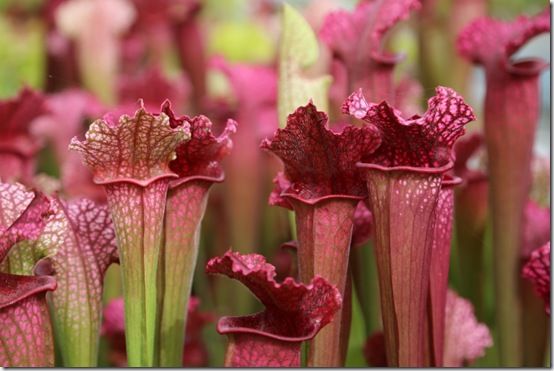 This year has been ideal for growth: high light levels early in the year have resulted in some spectacular trumpet pitchers, hence Matt’s exhibit at RHS Chelsea which was entirely composed of genus sarracenia. The colours, the shapes and the lines of these plants are quite bewitching: far removed from my miserable Venus Fly Trap which I still thought was quite wonderful. Standing in his greenhouse you feel quite humbled by the cluster of organ pipes of one of his show plants. I felt a strong desire to possess one: plant envy nearly as strong as my feelings about tulips and orchids; beware. 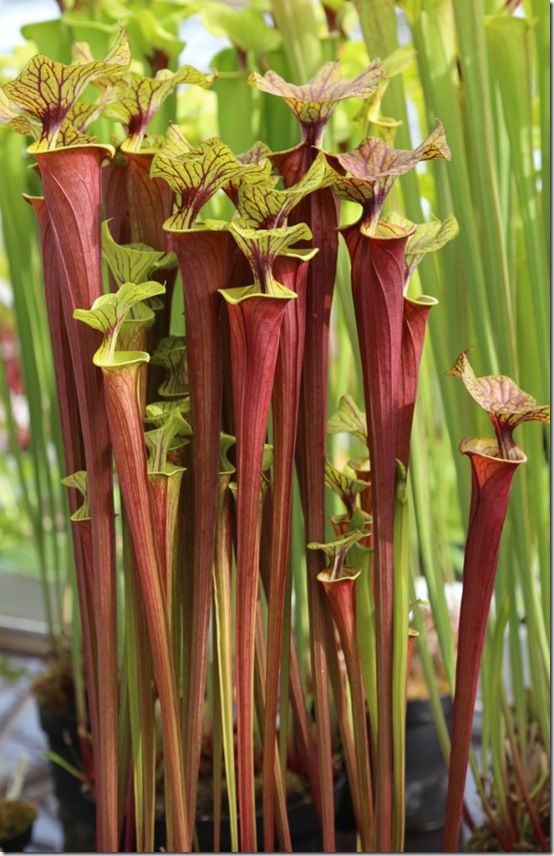 Matt has a great website, take a look. It will give you some idea of the variety and diversity of these wonderful plants. Beware, visit with caution; you might get hooked. 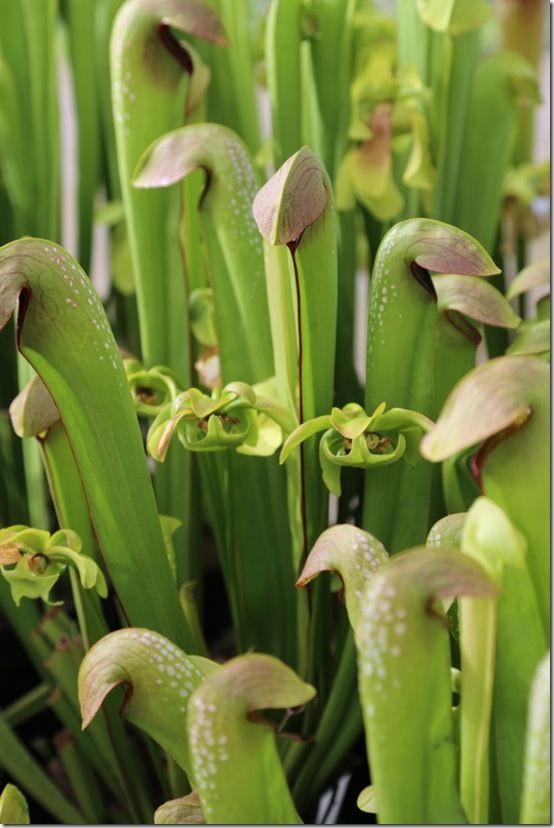