Many shy away from gold and green variegated leaves. It’s true they are bright, brash and eye catching, perhaps a little too much so for many people’s taste. However throughout the year the bold, bright leaves of euonymus, elaeagnus, ilex and other variegated evergreens add colour. But in winter, without the diluting effect of masses of green leaves around them, they come into their own and steal the show. They unashamedly become that shady border bling that some love, and some loathe! 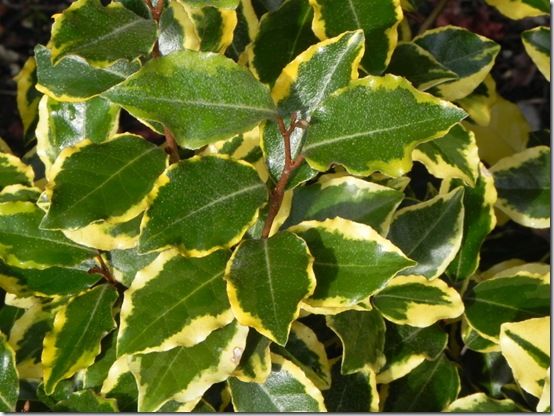 A holly is every gardener’s idea of the quintessential winter garden plant. When we imagine a holly shining red berries spring to mind. However, it is only female hollies that produce fruit, and most need a male, non-fruiting holly to pollinate them. The variegated cultivars are beautiful plants regardless of the berries and grow well in semi-shade under the canopy of deciduous trees. 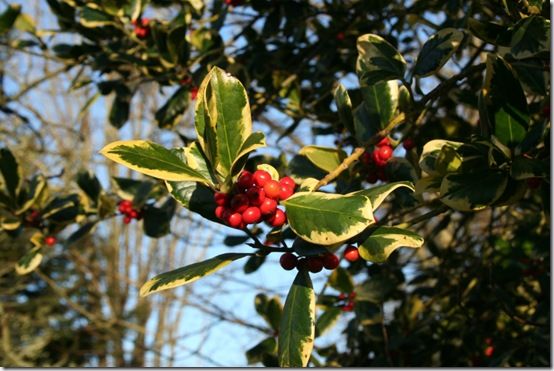 Ilex altaclarensis ‘Golden King’ is one of the finest with the benefit of both showy foliage and fruit. It has broad, dark green, almost spineless leaves broadly edged with rich golden yellow. Shining scarlet berries are freely produced; they glow against the gold and green leaves. Two things you should know about hollies: Firstly they are long-term garden plants that improve with age. They are often thin and spindly when young, only attaining their denser more elegant habit as they mature. Secondly their names are invariably confusing: most female hollies have masculine sounding names! 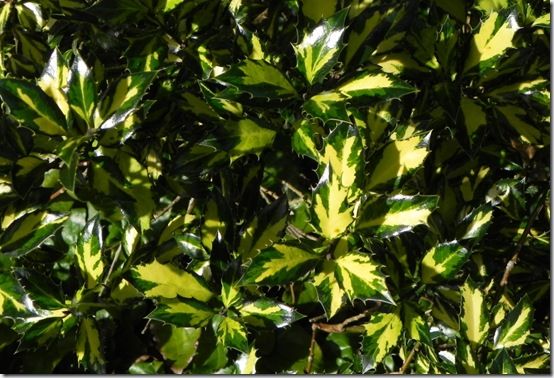 The evergreen euonymus are versatile plants: they grow on any soil in sun or shade, cope with salt winds and have year round appeal. The cultivars of Euonymus fortunei such as ‘Emerald ‘n’ Gold’ are so widely planted because they work. This plant is great under trees or to bring a ray of sunshine to any shady corner or pathway. It is excellent in pots and containers, and makes a brilliant short climber. Plant it at the base of a low wall or fence and it will creep up to a height of 2 metres (6ft). 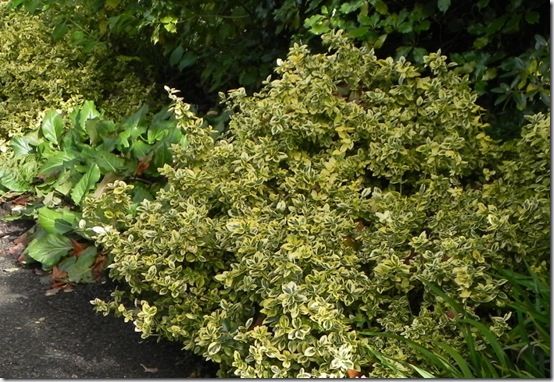 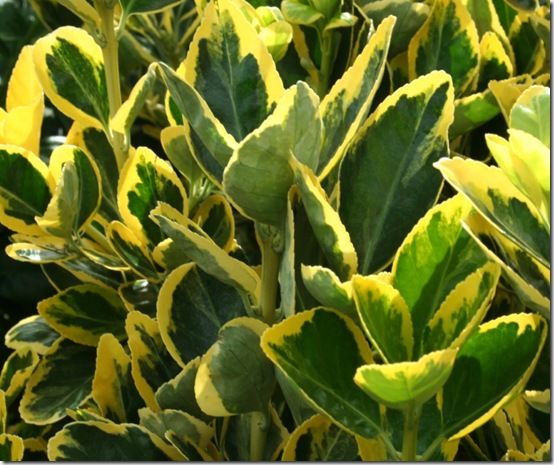 Euonymus japonicus boasts many cultivars, some with tiny leaves and some with quite large rounded leaves. Euonymus japonicus ‘Ovatus Aureus’ is the widely used green and gold form which grows to form a rounded shrub up to 1.5 metres (5ft) in height. Plants are variable and do have a habit of producing plain green shoots which would take over if not removed. Euonymus japonicus ‘Chollipo’ is a superior form with fine foliage that is boldly variegated with soft gold. It is quite upright in habit and suitable for narrow beds and borders in sun or shade. 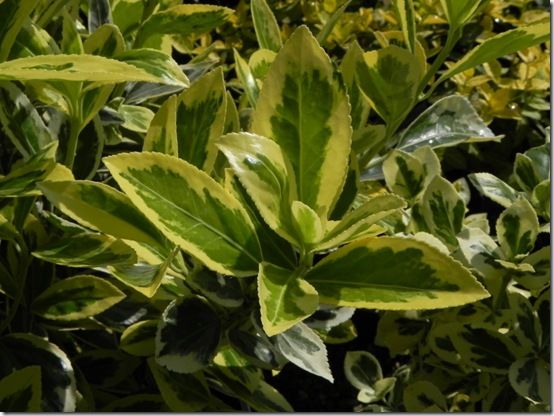 Those with small gardens or containers in shade will like the more compact, small-leaved varieties of Euonymus japonicus ‘Microphyllus’. These remain compact, bushy and upright and as I’ve said on many occasions before they make a fine alternative to boxwood, Buxus semperiverns ‘Suffruticosa’. Euonymus japonicus ‘Microphyllis Aureovariegatus’ has narrow dark green leaves edged with soft golden-yellow. The colouring becomes harsher and more brassy in an open sunny position. 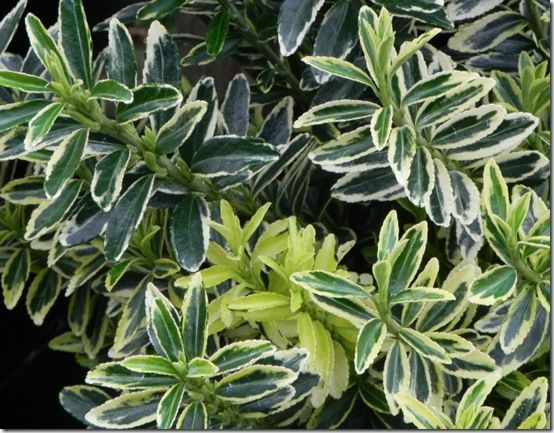 Gardeners have a love-hate relationship with ivy and many shy away from planting it as a garden ornamental. In fact the large-leaved variegated ivies are unbeatable for year-round colour on shady walls and fences, or up the trunks of mature trees. Hedera colchica ‘Sulphur Heart’ is particularly showy with its large dark green leaves boldly splashed with gold and emerald. It would make the perfect backdrop for a mahonia such as ‘Charity’ or ‘Winter Sun’; the flowers of the mahonia will pick up the golden highlights in the ivy. These mahonias tend to flower in early winter and seem to me to get earlier every year. In my garden the flower bud is already well advanced. 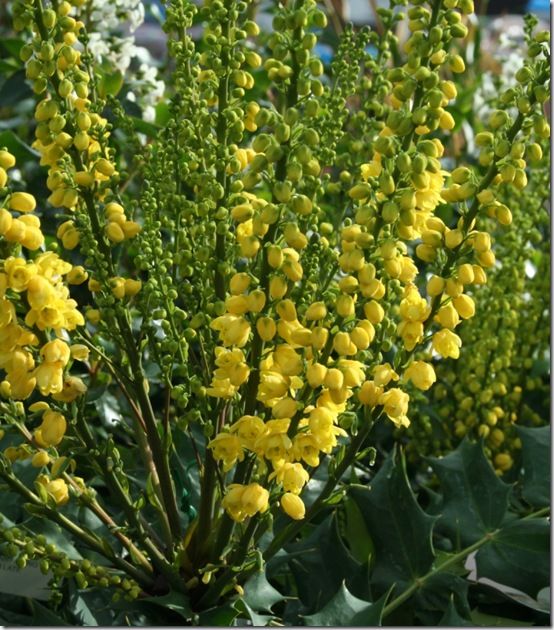 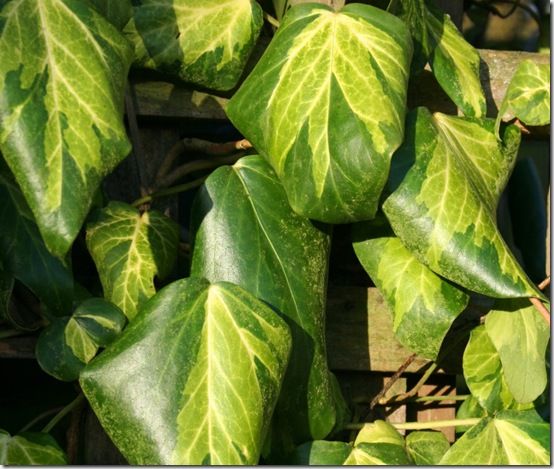 The foliage of the spotted laurel, Aucuba japonica becomes brighter and bolder in late winter and early spring. This is another evergreen where there are male and female plants. Some female clones produce fine red berries in winter transforming a rather modest subject into something quite flamboyant. Aucuba is a really good choice or heavy shade and thrives on just about any soil. It works well in urban areas and survives starvation in containers. Again even if it isn’t one of your first choices it works very well as part of a planting combination. 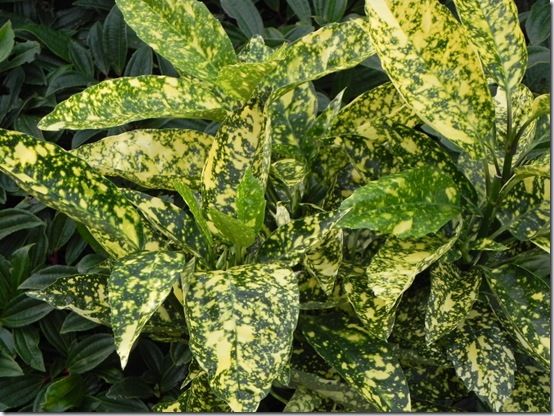 Where there is a little more direct light Dahne odora ‘Rebecca’ is a stunning choice where a small shrub is required. This seems to grow just as well as Dahne odora ‘Aureomarginata’ despite its much stronger, bolder variegation. As well as the bright gold edged leaves it has the advantage of wonderfully fragrant late winter flowers. One thing to note about daphnes: they do not like to be grown in pots and are rarely successful. Also they grow better on alkaline soils.. 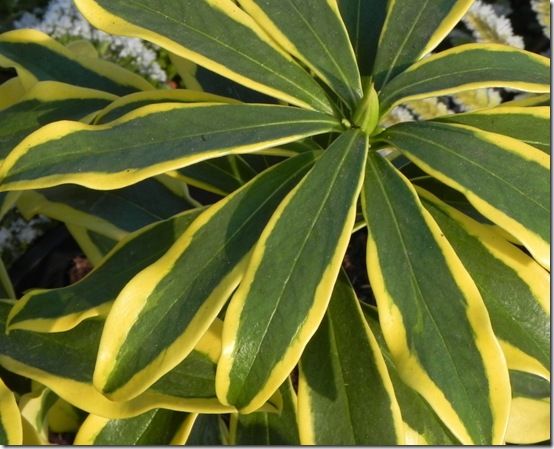 Even if you are planting gold variegations to lighten a shady corner you will find they are more effective if you include some plain dark green foliage as part of the planting combination. Viburnum davidii, Sarcococca confusa, Pachysandra terminalis, Lonicera pileata are all good choices. A few golden yellow narcissi such as Narcissus ‘February Gold’ will add a seasonal highlight in spring.

For lots more ideas on using shrubs to bring colour and interest to the dullest areas of your garden why not join me on my course on shrubs? A new one starts on line at the beginning of every month.