Here in England it’s been a pretty soggy autumn, but certainly nothing like the weather that those of you on the other side of the Atlantic have been experiencing. Our thoughts are very much with our American gardening friends, and I hope your next gardening season will be kinder.

Bonfire night here in England, November 5th is when we celebrate the anniversary of the Gunpowder Plot, Guy Fawkes and all that, with a fire in the garden and fireworks. The real things are short lived, a brief display against the night sky. However there are much longer lasting fireworks in the border; some have been around for several weeks, and can many can last well into November. 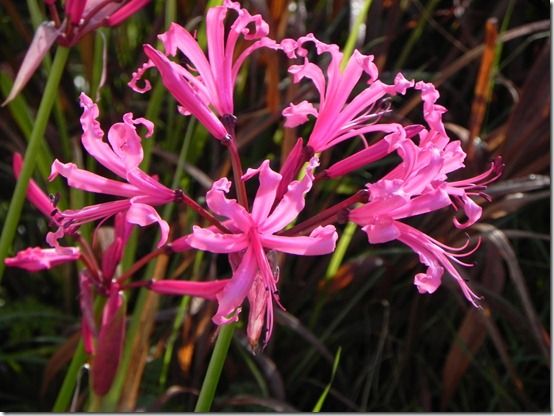 Nerines are real sparklers at this time of the year. These wonderful bulbs like a sunny spot at the base of a wall where they can enjoy a good bake during the summer months. Despite the lack of sunshine here this year I have seen some splendid nerines bursting into bloom, creating that dazzling, shocking pink display that for some is easy to achieve, and for others impossible. In my garden Nerine bowdenii, the most widely grown and easiest just will not perform. It’s my fault; I crowd the bulbs with other plants that shade them. The ideal situation for nerines is one in full sun, poor soil, no competition, and they like to be planted with the top third above the ground. A mulch of grit or stone scree across the soil surface helps. After that: do nothing. Nerines like to be overcrowded by themselves; they totally resent disturbance. 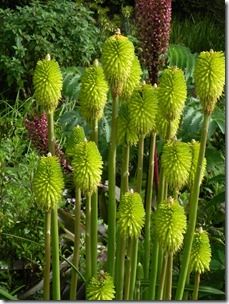 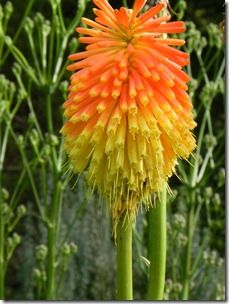 Red-hot pokers, sometimes known as torch lilies are the rockets of the autumn border. Strong stems explode upwards from an unattractive collection of pointed leaves that are sometimes grass like and sometimes broad and lax. Two things are certain: the flowers of kniphofias are stunning and the foliage is unprepossessing. Hide the foliage with other subjects and kniphofias can be the stars of the border. Members of the lily family most hail from South Africa where they grow in grassland at high altitudes. Therefore most kniphofias need a sunny situation, but they do not like to be too dry at the roots in the summer; if they are their display may be disappointing. Just to be even more difficult they like good drainage in winter which can be difficult to achieve.

The tubular flowers crowded onto the spikes of kniphofias are laden with nectar and are very attractive to bees and pollinating insects: useful late in the season when there are less single flowers around. Try growing them amongst prairie grasses such as panicum and andropogon. They also look stunning with smaller yuccas such as Yucca filamentosa and Yucca flaccida. 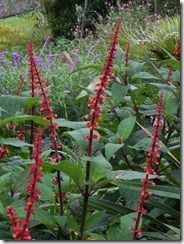 I am always attracted by salvias in late summer and autumn, and I know many salvia fanatics (I’m sure there must be a word for that!). One that I keep coming across in gardens is the lovely Salvia confertiflora. It is a large plant growing to 1 metre (3 feet) with deep green leaves and velvet spikes of rusty orange flowers. As with many salvias the flower calyx and stem is just as showy as, and fairly indistinguishable from the flower itself. When it catches the low level light of an autumn day it shines like a trail of sparks above the border and could be one of my favourite fireworks of the season! I don’t imagine it’s hardy, and think it may often be grown as an annual. Any salvia experts out there who can enlighten me? 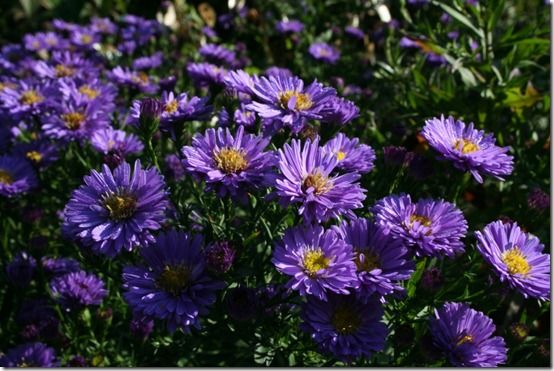 In my garden the late asters, especially the lovely Aster ‘Sapphire’ with its golden eyed blooms, still light up the darker moments of the border. This variety is worth seeking out – no mildew like many other asters. However despite the appeal of the late flowers in the border it is the dried seedheads of Allium schubertii that are the real fireworks in the border for me! Straw-like and weirdly structural they are almost like scientific structural models: molecular and abstract. This may not be the most colourful of the alliums but it is one of the most striking and long lasting. Dried seedheads brought indoors for floral decoration can last for years: a light gold lacquer spray transforms them into wonderful Christmas decorations!