An Interview with Will Giles – The Exotic Garden, Norwich, England
A visit to The Exotic Garden in the heart of Norwich, England is a surprise to say the least. Norwich is a quaint Cathedral city in Norfolk over on the eastern side of England, close to the chilly North Sea. Norwich is very English; The Exotic Garden is a touch of the Caribbean: lush, tropical, colourful and totally amazing.  It’s full of bananas, cannas, succulents, and a host of unfamiliar subjects that just shouldn’t grow outside in the UK. It’s a little oasis, a gem, the creation of Will Giles, a colourful vibrant character with great taste in shirts. I want to find out how he does it and why it works.

I’ve invited Will to share his life in the world of exotic gardening with MyGardenSchool followers. I’m really delighted to welcome him as a guest to the MyGardenSchool blog 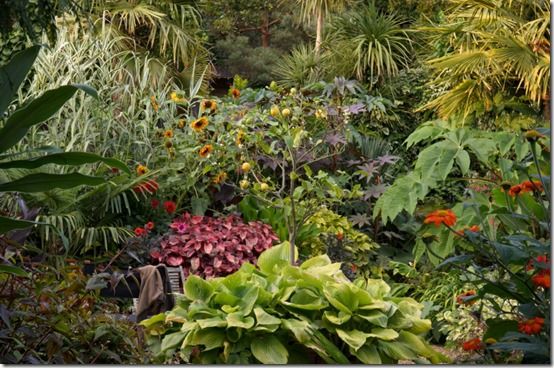 How did you get into exotics in the first place Will and how long have you been hooked?
Well, that a long story!  I first fell in love with large leaved plants at the age of seven when my grandmother took me to Kew gardens. My father built me my first 10x 16ft greenhouse when I was eleven, which I rapidly filled to the gunnels with anything that looked vaguely exotic, including many plants from seed.  My father and I used to have battles over the winter heating costs as he was paying the bills!

I left school with one O level in Art and was told that I would never make a gardener so was packed off to Art school instead and for a large chunk of my life was a botanical illustrator.

I lived in a flat in an old Victorian house in my early 20s growing mostly traditional herbaceous plants though I started growing such exotics as Cordyline australis. My passion at that time had also gone into anything prickly hence I developed a large collection of cacti and succulents.
Tell us a little about how you started the garden and how it’s developed.
In 1982 I bought my present garden – I wasn’t sure at that time how the garden was going to pan out, though a series of trips to tropical climes rekindled my liking for anything that looked unusual (exotic) I knew the more traditional herbaceous plants reached a peak in June and July, so started collecting plants that would look good well after this date. A that time there were no nurseries selling exotics and of course no internet to search for them, hence I scoured many books (including old Victorian ones from the days of exotic bedding in the large parks) searching for anything that fitted into my mind-set of creating a garden that looked other than in supposedly chilly Norwich. My first real breakthrough was reading a book by Myles Challis entitled ‘The Exotic Garden’ and with that in hand the search was on for ridiculously tropical looking plants! 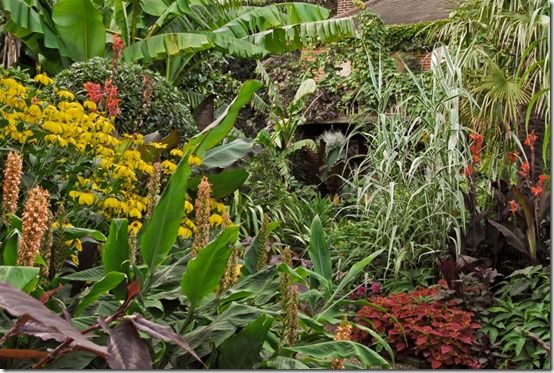 Why do these plants succeed in your garden in Norwich and how do you get them through the winter?
The Exotic Garden here in Norwich is blessed with its own microclimate, as the garden is on a south facing slope dropping some 15 metres, 50ft from back to front. It is also surrounded bay tall trees and hedges on the west, North and Eastern side (more open to the south) creating a mild benevolent climate. 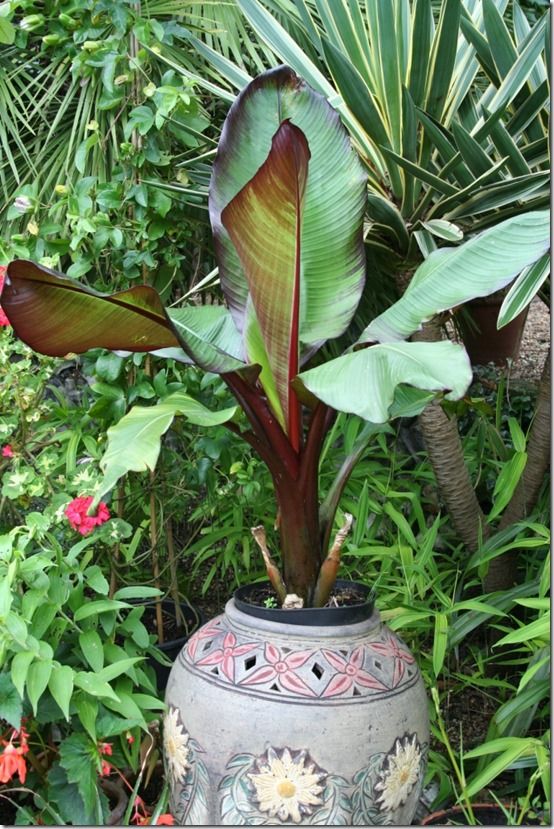 I have planted a backbone of hardy plants such as the dead hardy Trachycarpus fortunei. For a more lush effect through, the root hardy banana Musa basjoo grows very well here, with several clumps now in their 25th year (outside). Many of the Gingers have also proved very hardy here as well, some like Hedychium forrestii for instance obtaining 2-2.5metres, 7-8ft of new growth every season. 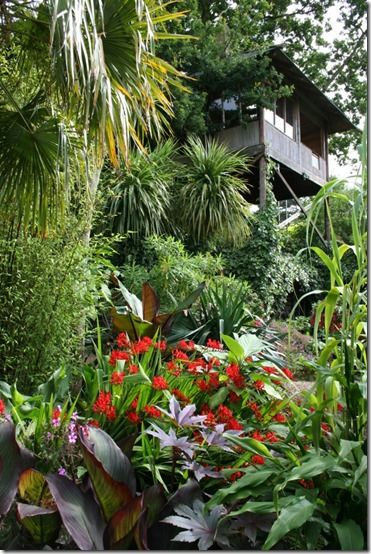 I also bed out lots of tender planting such as Cannas and myriad of other tropical’s that grow like mad here during the summer months. These are overwintered in a large Polly tunnel then planted out at the end of May where they all become ginormous by September and into October. 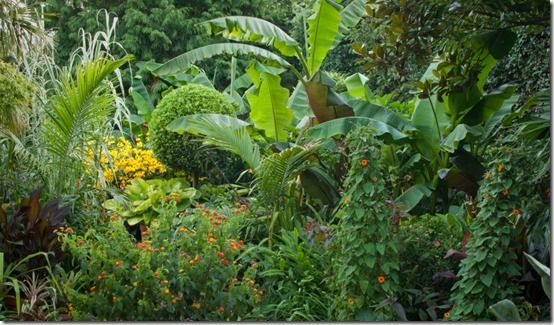 Have you travelled to see some of these plants growing in the wild? Any especially memorable experiences?
Yes I have, many times over the year, in fact over the last fifteen years or so, I am a tour host mostly to the Caribbean often twice a year in the winter months. I have also been to many other parts of the world including India and South America and quite a few gardens in North America where I have lectured a few times in recent years. – As long as they have tropical plants, I’m happy! I remember a visit to a Nursery in Agra India, where I spent about an hour only talking in Latin names to the nursery owner who spoke no English – it worked perfectly! 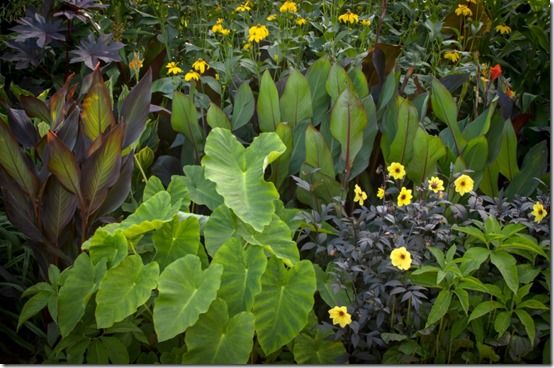 Have you seen an increasing interest in exotics in recent years? Do you think the past few cold winters have put people off?
Growing Exotics really started to take off from the end of the 80’s into the 2000’s with many Exotic nurseries starting up in that period. They all still seem to be going despite the recent series of hard winters. All I can say is, the interest in my Exotic Garden here in Norwich has not waned in the least in recent years as visitors just find it so plain different to regular style gardens and maybe want to recreate a small bit of it in their own,  recreate that far away feeling. I think I allow people to create their own fantasy world and I’m very much for that! 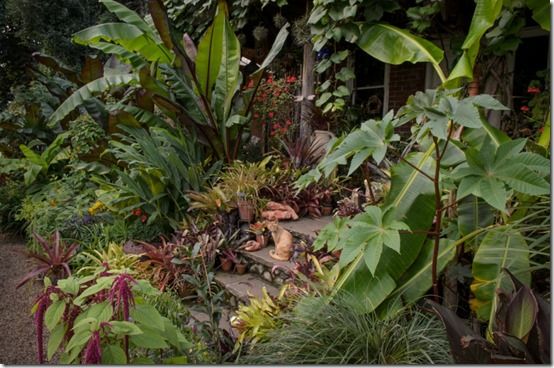 Have you any top tips for gardeners going exotic with their plant palette?
I think the first thing to become aware of is what your garden can grow and its particular microclimate. If you live in an exposed are with a large field behind, you are limited as to what you can grow, hence getting good boundary hedges or some form of screening is essential. Obviously the south side of a house or fence is going to be warmer than the north side; Prevailing winds have to be considered and when they have done all that, purchase a copy of ‘The Encyclopaedia Exotic Plants for Temperate Climates’ Timber Press by your truly! 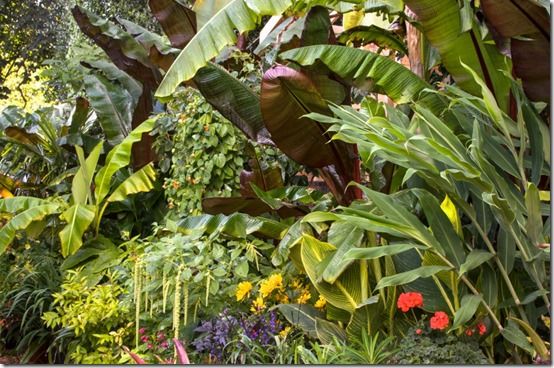 If I you had to choose your three “Desert Island Plants” what would they be, and why?
When you say ‘desert’, I presume you ‘do’ mean arid? Here I would grow Sahuaro from Arizona, Yuccas form Nevada and maybe a few Lithops form South Africa low down!
What are your other guilty pleasures in life apart from plants and wild shirts?
Gosh, well I’m an avid New Scientist reader which took over from the Beano many years ago now. I may not understand it, but anything to do with quantum physics fascinates the hell out of me. I am also politically minded, but we won’t go there!

Visit the website and check out his blog at exoticgarden.com You’ll find details of opening times there too.