How To Grow & Care For Orchids

Part of this allure has to be because in the past they have been seen as almost unattainable; a difficult to grow specialist plant for experts only. And this was true – once, but not any more. 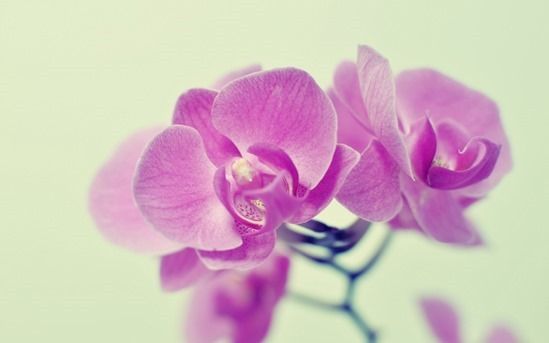 The Victorians used to have staff who wheeled them into their stately homes when they were in flower for a few months and then ship them out of sight into the glasshouse when they were ‘resting’.

The big difference now is that a colossal amount of breeding has been done to produce plants that love rather than loathe the environments of our homes and there are now orchids that flower virtually all year making the ‘leaves only’ down time virtually insignificant. In short, certain orchid varieties are now amongst the easiest indoor plants to grow and undoubtedly the most rewarding.

There are 880 types or genera which include perhaps 30,000 species but in truth only a handful make good indoor plants. These are all from the tropics and are mostly epiphytic which means they grow up in trees rather than on the ground. In the wild these plants cling to the trees with their roots but they get no nutrition from the tree itself. 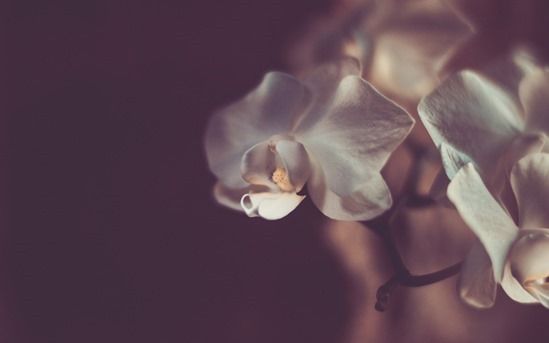 This comes only from organic matter decaying in the crooks of branches and animal droppings that wash down the tree in the rain. The plants absorb water from the humid jungle air but they have to deal with times of abundant water and times of drought, so many have evolved water storing pseudobulbs.

Looking after orchids isn’t difficult it’s just different from other houseplants and to keep orchids happy all you have to do is mimic their natural conditions. 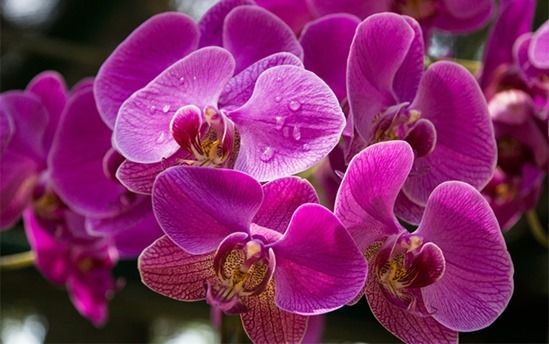 High humidity is a must. Stand plants in shallow trays of water with pebbles in the bottom to lift the pot and therefore the roots out of the water which will gently evaporate and caress the leaves in moisture.

For flowering a steady temperature is important although it can happily be less at night. That means between 15 and 20C or more by day and at least 5C at night which for most of us is more or less how we would keep a frequently used centrally heated living room at a comfortable temperature. This doesn’t replicate perfect conditions for a jungle dwelling orchid but it’s as close to it as we can reasonably get in our homes. Cooler night temperatures initiate flowering in many species

Overwatering is the big killer. It’s incredible how little they actually need as once a week is usually plenty and many will cope with even less if you tend to be erratic in that department. Let at least the top half of the potting medium dry out between watering and then take it to the sink and drench it under the tap until it is saturated with water pouring out of the bottom of the pot.

But never stand in water or the roots will rot. Of course every orchid is slightly different and light, temperature and potting medium will all make a big difference to how often you need to water.

Soft tepid rainwater is ideal but avoid cold water which can shock them. In the brief winter rest period let the potting medium dry out almost completely.

Treat ‘em mean, keep ‘em keen. Too much fertilizer will give you wonderful leaves but not flowers. A weak foliar feed roughly once a month is about right but nothing at all during the rest period. 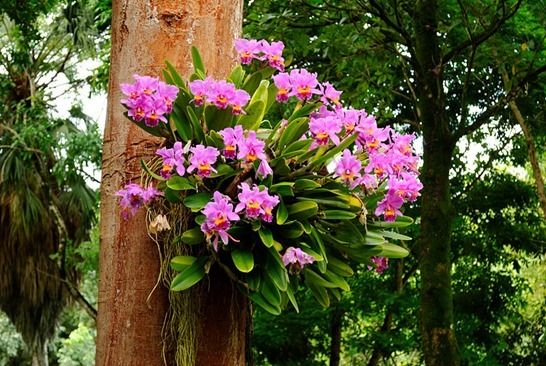 Regular peat based potting compost is useless as it holds far too much water and an open airy mix with excellent drainage is vital. You can of course buy premixed orchid ‘compost” but a good recipe is 2 parts rock-wool or shredded bark to one part sphagnum moss and one of perlite.

When the sphagnum dries out it is a good indicator that the orchid needs watering. A little crushed charcoal will absorb toxins. Clear pots have become common with orchid growers as you can see the roots which indicate how healthy the plant is. Keep pots as small as the plants allow and repot during the dormant non flowering period.

Orchids need it bright but not scorching so grow near a window that gets at least a few hours of sun either in the morning or afternoon but not at midday when summer sunshine will roast the plant and kill it. However, in winter when the sun is lower in the sky and less harsh you can move them to a really bright window sill which will improve flowering.

Most orchids need a rest period in order to flower well. This is generally after flowering and may only last a few weeks and is indicated in some species by leaves dying back. Temperature should be lowered and watering and feeding stopped temporarily. 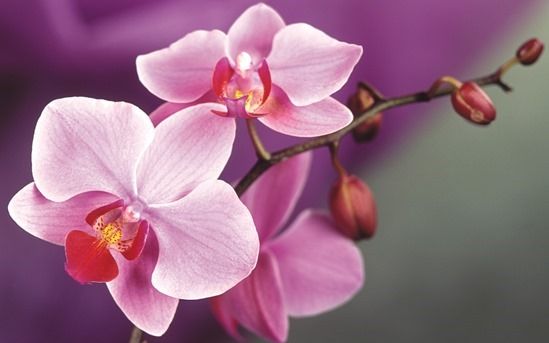 Modern varieties of moth orchids are probably the easiest to grow. From noble whites to spotted harlequins these single stemmed epiphytes have a few handsome leaves and flowers that keep going virtually all year. Shorten stems of dead flowers to just below the lowest bloom and new ones will grow on side shoots. They need steady warm temperatures but don’t need a resting period. A few nights of lower temperatures can spark them into bloom. 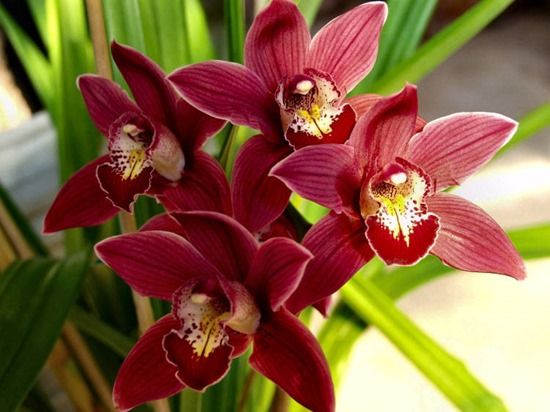 Cymbidium are relatively easy although they get more hungry and thirsty than most and need more light. Easily recognized by a clump of grassy leaves 40-50cm tall mature plants send out up to six erect flower spikes of waxy flowers up to 6cm across which last about 6 weeks in late spring and early summer. Feed after flowering and reduce night temperatures from August to October. 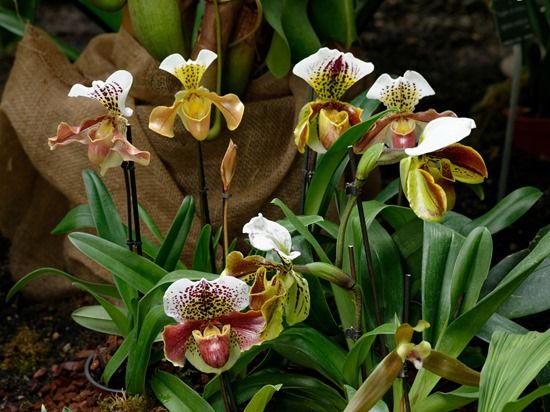 The slipper orchid is named for the moccasin shaped lip that forms most of the flower. These terrestrial orchids come in a huge range of colours with lone flowers lasting between 8 and 12 weeks between autumn and spring. They can’t store water as they don’t have pseudobulbs, so they should be kept slightly moist. Ease off on the watering after flowering and repot annually. 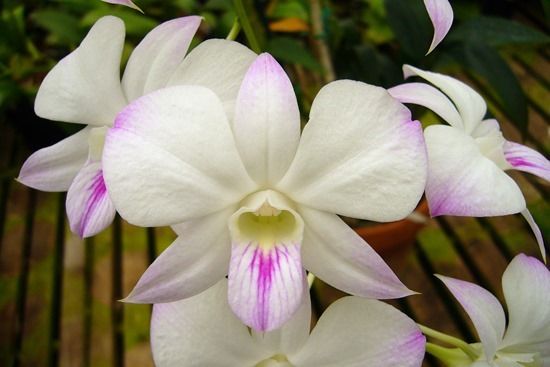 Cane orchids are from warm tropical climates and cool mountains and are tall and upright. The growth period occurs after flowering from spring to early summer when they should be watered and fed frequently. In winter this should be considerably reduced. They do best when pot-bound. 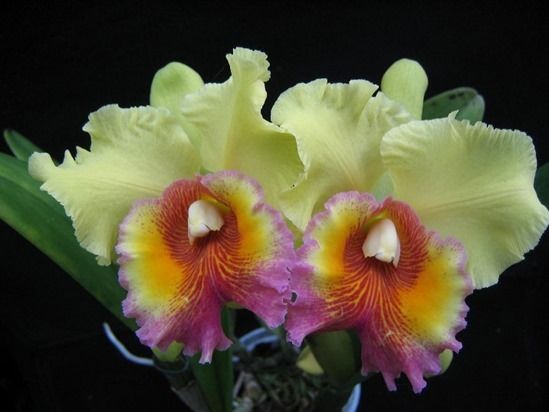 These often fragrant plants have huge flowers and thick, rigid leaves. Certain varieties produce flowers at different times of year. They need relatively high humidity and the foliage should be misted daily. They should be allowed to partially dry out between watering. Lack of light and overwatering are the most common causes of a lack of flowers.

Article written by Andy Sturgeon of www.andysturgeon.com; a multi-award winning garden designer who has twice been voted one of the Top Ten in the UK amongst numerous Best in Show and Gold Medals at the RHS Chelsea Flower Show.