The autumn anemone is one of the great garden delights of late summer and autumn. I originally knew this wonderful perennial as the Japanese anemone, later as Anemone japonica. It was always known as a plant that thrived and spread in some gardens and refused to establish in others; perhaps because it was often sold as a bare root perennial, wrapped in peat and plastic. Today well-established container grown plants ensure its quick establishment on most reasonable soils, in sun or shade. However it always seems at its best in a semi-shaded situation that gets some direct sunshine for a couple of hours a day. It grows best where the soil does not dry out completely. At the time of writing autumn flowering anemones growing on dry soils in full sun in the south of England certainly look very stressed. Recent hot weather and lack of rainfall have resulted in shrivelled and scorched leaves that are normally quite luxuriant at this time of the year. 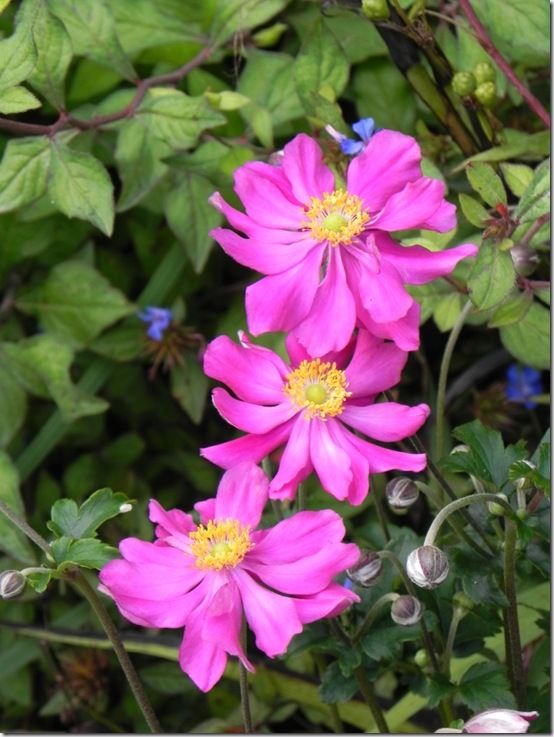 In semi-shade, perhaps in the shadow of a wall, or in a small courtyard garden the foliage of Japanese anemones makes excellent ground cover.

E. A. Bowles wrote: “It has taken possession of rather more of my garden than I desired, but it is so lovely that I cannot bring myself to root any of it out”. I’m rather glad that my mother never read that quote; she struggled to grow it but loved it so. 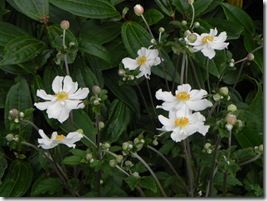 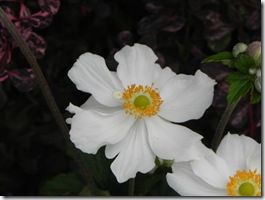 Few flowers bloom for such a long season. The simple pink autumn anemone, known as Anemone japonica of gardens can bloom for nearly three months. The charming rounded blooms with their round shining petals are elegantly poised on slender upright stems high above the lovely dark green foliage. The centrepiece of each bloom is a crown of golden stamens. 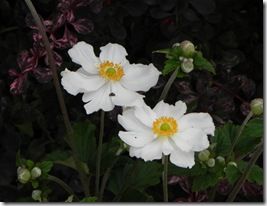 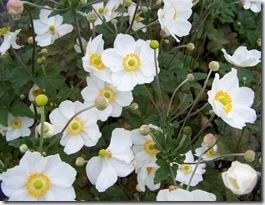 The white form Anemone x hybrida ‘Honorine Jobert’ is my favourite and is one of the loveliest white flowers. The silken petals surround particularly fine golden stamens. It is at its best against a dark green background such as the evergreen mound of Viburnum davidii in a semi-shaded corner. On fertile soil it can grow to a metre or more in height but is often shorter in its first season. The light height of this elegant perennial means that it fits easily into any garden.

The lovely deep pink Anemone x hybrida ‘Prinz Heinrich’ is also a delight. The semi double blooms have narrower waved, slightly incurved petals. The slender flower stems grow to 60cm or so above particularly fine dark green foliage. It is lovely planted alongside the plum foliage of Berberis thunbergii ‘Rose Glow’ or the autumn sapphire blooms of ceratostigma. Anemone ‘Prinz Heinrich’ is a particularly fine plant for a small garden or a narrow border. This variety is also sometimes offered as ‘Bressingham Glow’ or ‘Bodnant Burgundy’. As it is really deep mauve-pink in colour Christopher Lloyd wrote of it: “heaven help you if you are ever offered Burgundy of this colour”.

The Japanese anemones can be slow into growth in spring and even when well established only produce a ground cover of green leaves by early summer. Allium christophii is a good bulb to underplant them with t prolong the season of interest. Its sparkling silver-lilac blooms are set off by the green foliage and the poor fading leaves of the allium are concealed under the leaves of the anemone. This only works well if the anemones get a reasonable amount of sunshine and the soil is well-drained.

If autumn anemones look familiar to you in a different context all may become clear later in the year. The simple bloom of the Japanese anemone is often mistakenly depicted as the Christmas rose alongside holly on Christmas cards.