Dealing with the pond is not always the most appealing garden task in autumn and winter.  As the days get colder and shorter much of my gardening time is spent dealing with fallen leaves, cutting back faded perennials, planting bulbs and trying to keep the garden picture as appealing as possible.  I keep looking at the pond wishing I had sorted out the waterlilies, as I meant to, earlier in the season. I wish I had got a pond net in place before the leaves started to fall. I know I should really try and cut back the marginal, but …maybe next week. The first thing to remember is that it is not too late. There are plenty of leaves still to fall and they will be blowing around the garden all winter and into the pond. 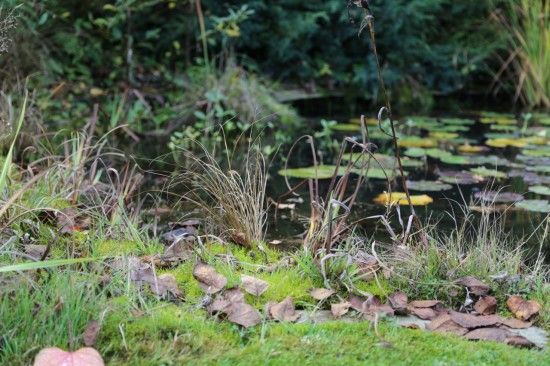 Leaves blowing into the pond[/caption]

Opinions vary on the harm or benefits of fallen leaves and decaying vegetation in ponds.  The fear is that decaying vegetation overloads the nutrient balance of a pond which can be harmful.  In reality fallen leaves contain relatively low nutrient levels because the trees, shrubs and perennials that lose them naturally have absorbed the majority back into the plants.  A few fallen leaves provide food and shelter for aquatic life.  However excessive build up can gradually fill a pond and take up space. So you don’t need to be too particular about it; just limit it. 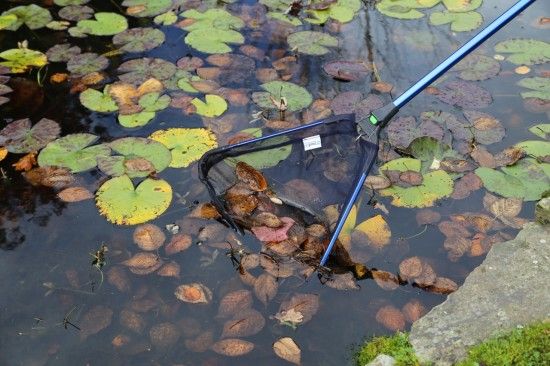 The first thing I would do is to get yourself a quality pond skimming net and remove any floating debris and leaves from the surface and any major build up around the edges of the pond.  A whole range of pond maintenance equipment is available from Swell UK http://www.swelluk.com/pond/pond-vacs-maintenance-58.html.  I use a clean wheelbarrow alongside the pond, to enable me to rinse through the debris before putting it on the compost heap.  Any wildlife should then be left in the wheelbarrow.  Alternatively you can leave it heaped up around the pond for a day or so to allow anything to crawl back into the water. 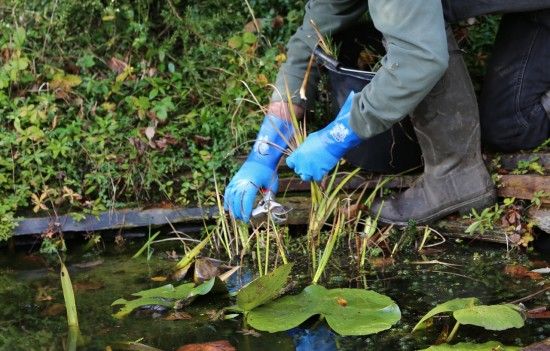 Next cut back the faded leaves of irises and rushes and the old flower stems and foliage of marginal plants.  These collapse into the water over winter and look unsightly.  They are also soon used in spring as a shelter for wildlife; you will find frog and toad spawn and other eggs amongst them. Try and remove them at that time and you will harm the wildlife. Again you don’t need to be too particular. A few left in place will be appreciated by amphibians and insects. 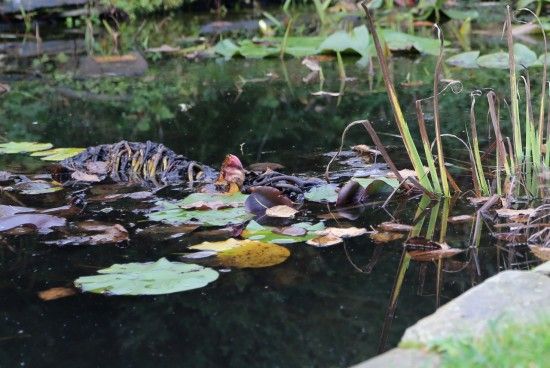 I always wonder what to do about floating waterlily rhizomes. Even if you thin out your waterlilies regularly, vigorous varieties produce hefty rhizomes, some of which rise to the surface, rather than wandering around on the base of the pond as they are supposed to.  This is mainly because the roots fail to anchor in ponds lined with butyl rubber or pre-formed liners. I sometimes sink them again by tying them to a brick covered in rubber pond liner. I use a flexible plastic tie which does not harm the lily and does not rust in the water. Lily rhizomes are usually killer if they freeze, so if you are worried you should try and anchor it to the bottom of the pond before severe frost. I have lots of lilies so I’m going to leave it to chance and deal with it in spring. 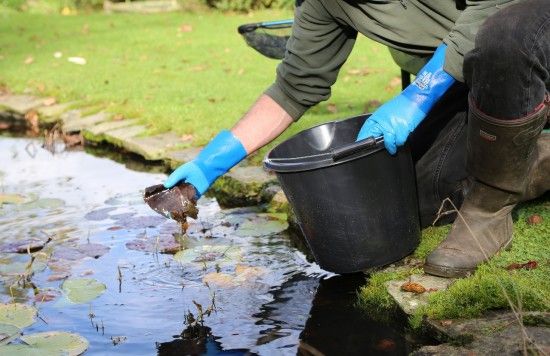 I do like to try and remove a few of the rotting lily leaves and flowers, but again there is no need to be too fussy. It’s also a good opportunity to get rid of any excess water soldiers (Stratiotes aloides) and bog bean (Menyanthes trifoliata) which does seem to run everywhere. 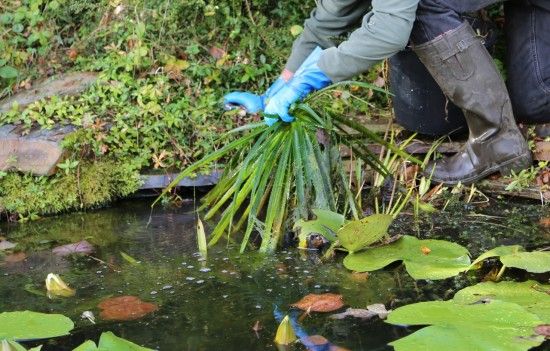 When you’ve cleaned up it is time to put a good quality protection net in place.  You need one that is large enough to cover your pond with a decent overlap so that you can peg it in place. I have a rock bank on one side and a stone edge and lawn the other, so it does take a bit of thinking about. There are a range of sizes available, take a look: http://www.swelluk.com/pond/pond-vacs-maintenance-58/cover-nets-1662/swell-pond-cover-nets-black-357496.html

putting a net in place[/caption]

These pond nets are also effective in deterring predators; in my case herons. They are always looking out for fish which are more exposed when the lily foliage dies back. If the water is still warm in late autumn they can still be very active and easy prey. 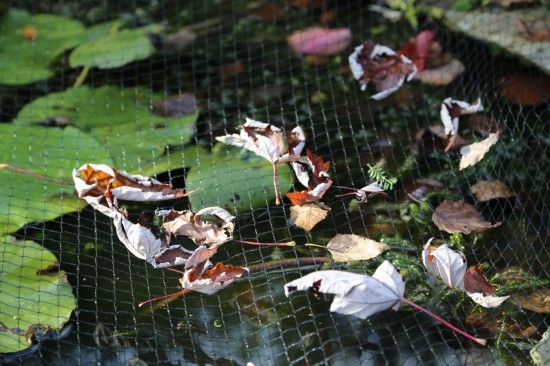 I won’t leave the net in place throughout winter, but I’ll keep it there until the last of the leaves have fallen and I’ve mown them all up off the grass. These soft, polypropylene nets are very flexible and are easily gathered up and stored for the following year.