In the last ‘back to basics’ lesson, I talked about sowing seeds and pricking out.  Now we will look at another form of propagation; taking cuttings also known as vegetative propagation.

One of the most exciting skills you can have in gardening is knowing how to take your own cuttings. When you can do this, and understand the principles behind the method, you no longer need to buy plants, shrubs or perennials from • nursery or garden centre. Instead  you can propagate your own and replace plants in your flowerbeds that are past their prime. And if you have friends who grow plants that you covet, it is easy to them to let you take a cutting.

A cutting is a part of a plant—a piece of stem, leaf or root—which is induced to form roots of its own and thus develop into a young plant that is identical with its parent.

Many plants can be propagated from cuttings but the type of cutting to prepare depends on the plant. A wide range from hardy shrubs to greenhouse plants can be increased from softwood cuttings. These are prepared from very soft young shoots early in the year, generally in the period from late spring to mid summer (April to June), although some may be taken even earlier than this.

Cuttings, whether softwood or any other type, must be prepared with a very sharp knife or razor blade to ensure clean cuts. Ragged cuts resulting from using a blunt knife may take too long to heal, and could eventually result in the cutting rotting instead of making roots. 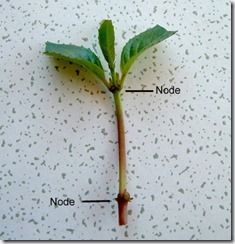 Hardy shrubs that can be propagated from softwoods include Weigela, Deutzia, Philadelphus, Buddleia, Caryopteris, Hypericum and many other deciduous kinds. The cuttings of these can be about 8cm (3 in) in length, and should be cut cleanly just below a leaf joint, or node. Such a cutting is generally known as a ‘nodal’ cutting.

The lower leaves should be carefully cut off as close to the stem as possible. The bases of the cuttings can then be dipped into a proprietary hormone rooting powder or liquid to encourage rapid root formation.

Softwood cuttings are liable to lose water very quickly and wilt, so they must be inserted in the rooting medium as quickly as possible. The usual compost for rooting is a mixture of equal parts of moist sphagnum peat and coarse horti­cultural sand.

A small number of cuttings can be rooted in pots of a convenient size, but larger quantities should be inserted in seed trays. The container should be filled with compost to within 13mm (£ in) of the rim and firmed moderately well with the fingers. Cuttings are placed in holes made with a dibber - a piece of wood shaped rather like a blunt pencil. In fact, a pencil makes a good dibber. The base of each cutting should be in close contact with the bottom of the hole. Firm in with the fingers and when the container is full water with a fine rose on the watering can.

Softwood cuttings of hardy herbaceous perennial plants such as Delphinium, Lupin, Phlox, Chrysanthemum, Gaillardia and Scabious, and of half-hardy peren­nials like Dahlia and glasshouse Chrysan­themum, are prepared and inserted in the same way. Remove young shoots when 8cm (3 in) long, from as close to the crown of the plant as possible.

Other plants that can be raised from softwood cuttings are tender greenhouse plants such as begonia, coleus, fuchsia, impatiens and Tradescantia. Cuttings of fuchsia can be prepared by cutting the base between two nodes or joints—these are known as ‘internodal’ cuttings. 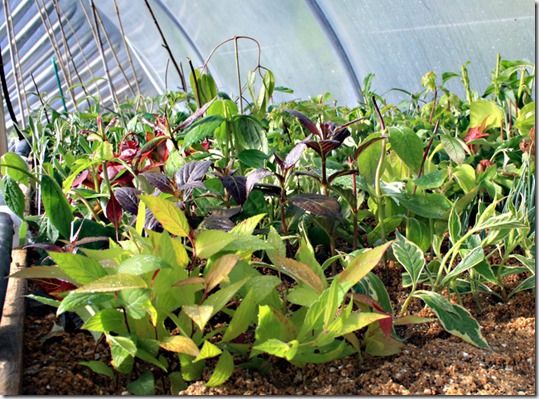 All softwood cuttings need plenty of warmth in which to root, and a humid or moist atmosphere. The simplest method of providing these conditions is to wrap a pot of cuttings in a polythene bag, which should be tied at the top, or place a jam jar over the cuttings, and stand it on a windowsill in a warm room, preferably above a radiator. A more sophisticated approach is to invest in an electrically heated propagating case, which is gen­erally placed on a greenhouse bench. This should be set to give a temperature of 52°C (70° F).

The covers should be removed for an hour or two, several times a week, to allow the containers to dry off, because a great amount of condensation forms in these enclosed conditions.

The most adventurous way of rooting cuttings is to install a mist-propagation unit in your greenhouse. This provides heat at the base of the cuttings and sprays the leaves intermittently with water, which prevents the cuttings from wilt­ing and dying. Reasonably simple and cheap units are available to amateur gardeners.

Some softwoods can be rooted simply by standing them in jars of water on a warm windowsill indoors. Plants which respond to this treatment include Coleus, Fuchsia, Impatiens, Tradescantia and Zebrina - all popular house plants. 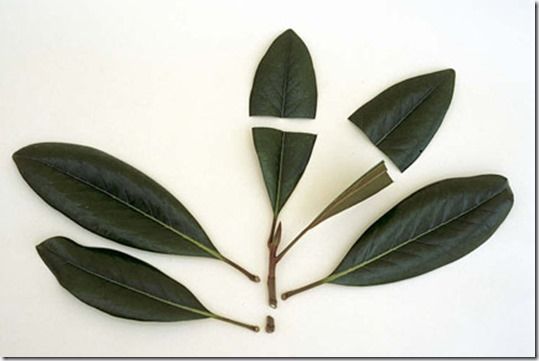 Many plants can be prepared from semi- ripe (or semi-mature) cuttings. These are prepared from shoots which are ripening or hardening at the base but are still soft at the tip. The time to take these is late summer to late autumn (July to October).

Evergreen and deciduous shrubs, heathers, conifers and half-hardy peren­nials like Pelargonium (geranium), Helio­trope and Gazania, can be increased from semi-ripe cuttings.

Cuttings generally vary in length from some 10-15cm (4-6 in), but those of heathers should be only 5cm (2 in) long. These can simply be pulled off the plant, whereas cuttings of other subjects must be nodal and prepared with a knife.

Preparation and insertion are the same as for softwoods, but less heat is needed for rooting. A cold frame makes an ideal rooting environment, but of course if you have a propagating case or mist unit then root them in these. 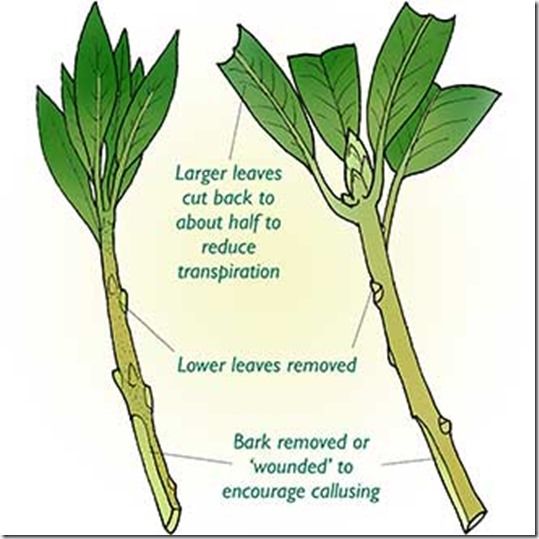 Hardwood cuttings, which are inserted in early and mid winter (November to December), need no heat at all to root. Common examples of shrubs and soft fruits raised from these are privet, willow, shrubby dogwood, Chinese honeysuckle, blackcurrant, redcurrant and gooseberry.

Choose current year’s shoots which are completely ripe or woody and cut them into 23-30cm (9-12 in) lengths with sharp secateurs. Cut just above a bud at the top and just below at the base. With red- currants and gooseberries remove all the buds except the top three or four. Dip the base of the cutting in a hormone rooting powder or liquid.

The cuttings are inserted to two-thirds of their length in a V-shaped trench made with a spade in a sheltered well-drained spot outdoors. Firm them in well. They will be well rooted by the following autumn (September).

The leaf-stalk attached. The complete leaf- stalk is inserted in a peat and sand compost so that you leave only the leaf blade exposed.

In the case of a plant like Sansevieria (Mother-in-law’s tongue), one of the long leaves should be cut into 5cm (2 in) sections. Each section is pressed into peat and sand compost to about half its length. Make sure you insert each section the right way up.

Rex begonia can be propagated by removing an entire leaf, cutting through the main veins in several places on the underside and laying the leaf, top side uppermost, on the surface of a tray of compost. Hold the leaf down with small •tones. Young plants will form where you have made the cuts.

Unlike softwood cuttings, leaf cuttings need plenty of warmth and humidity to enable them to root.

A leaf-bud cutting is a portion of stem •bout 2'5cm (1 in) long, with an entire leaf attached at the top, and a bud in the axil (the point where the leaf joins the stem). Rubber plant, Camellia, Clematis, Passion Flower and Ivy can be propagated by this method, which should be carried out in lute spring (April). Insert cuttings so that the leaf only is above the compost and root in warm, humid conditions.

Grape vines and their close relations (Parthenocissus and ampelopsis) are propagated from eye cuttings in mid winter (December). You will probably need a propagating case for this method as a base temperature of 52°C (70°F) is required for rooting. Use well-ripened or hardened current year’s wood. Cut it into 4cm (li in) sections, each with a dormant ‘eye’ or bud in the centre. Remove a thin slice of wood on the opposite side to the bud. These cuttings are pressed horizon­tally into pots of peat and sand compost, with the buds uppermost, and just sufficiently deep to ensure that they remain stable. Water in and place in the rooting environment.

Pinks are raised from a special type of cutting known as a piping. In late summer or early autumn (July or August) pull out the tops of young shoots: they should snap out cleanly just above a leaf joint or node. Each one should be left with three or four pairs of leaves, after the lower leaves have been carefully pulled off. Using a dibber, insert the pipings around the edge of a small pot containing peat and sand compost. Water well in and then place in a cold frame to root. 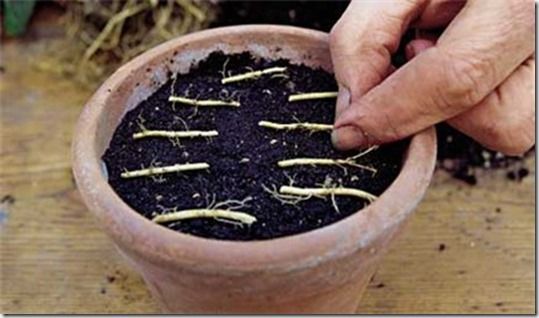 The time to take root cuttings is when the plants are dormant, a good period being mid winter (December). Use young roots of no more than pencil thickness; the roots of some plants, such as phlox, Primula, Morisia and Pulsatilla, will be thinner than this.

The roots can be obtained by scraping the soil away from large plants, removing a few roots, returning the soil and firming. Small plants can be lifted, a few roots removed and then replanted.

The roots should be cut into 5cm (2 in) sections with a knife or secateurs. Thick roots are inserted vertically, and to ensure that you keep them the right way up the tops of the cuttings should have a flat cut and the bases a slanting cut. The top of a root cutting is always that part which was nearer to the stem of the plant.

The cuttings can be rooted in pots or boxes of peat and sand compost. Thick cuttings should be pressed vertically into the medium so that the tops are just below soil level. Thin cuttings cannot be pushed in vertically, so are laid horizontally on the surface of the compost and covered with a further 13mm (} in) layer. Place in a cold frame or greenhouse to root. The top growth will be produced first so do not be in too much of a hurry to lift the cuttings for planting out.