As soon as we get into March Chelsea Flower Show looms on the horizon. The pages in my diary seem all too few between now and the event; there is so much to fit in alongside preparations for the show. I know it’s the same for all the exhibitors; it only seems five minutes since the last one. 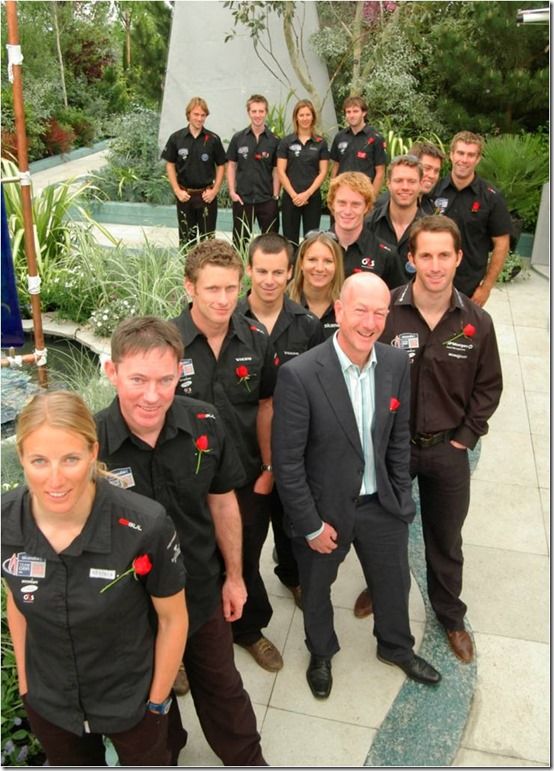 I’ve been talking Chelsea a lot lately, but then I suppose I’ve been talking ‘Behind the Scenes’ at Chelsea Flower Show for the past twenty or so years. It’s still my most popular talk for gardening clubs, horticultural societies, charities and even sailing clubs! There is so much global interest in this event; arguably the most important and high profile in the world gardening calendar. On Friday I was at Dorset Gardens Trust talking Chelsea. Rather an appropriate day really as it was the day that Ben Ainslie, the Gold Medal winning sailor from Lymington in Hampshire (not far from us in the South of England) got his knighthood. “What’s that got to do with it”, I hear you say. Well, in 2009 the Hillier Nurseries exhibit was the ‘Sail for Gold’ garden at Chelsea Flower Show, and I followed the British Sailing Team for a year in preparation. Sir Ben Ainslie and the rest of the team, including Iain Percy and Andrew Simpson, all came along for the press launch of the exhibit on the Monday of Chelsea week. 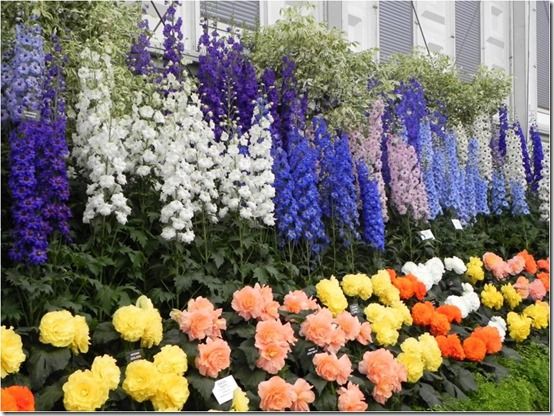 That’s the great thing about Chelsea Flower Show, no two years are ever the same and I get to see other worlds outside the world of gardening and horticulture. This year marks the 100th birthday of Chelsea Flower Show so everyone is looking back over the years for memorable moments. I can’t go back that far and records and pictures are few. Maybe I’ll share a few with you as I find them over the next few weeks. I certainly remember my first visit to Chelsea Flower Show as a schoolboy. I was about 13 or 14 and I went with a friend and my parents on the coach from the Midlands town where I grew up. I clearly remember the Great Marquee, the yellowing light under the canvas, the warm humid atmosphere and the crowds. I remember the smell: the sweet fragrance of lilies mixed with crushed grass and dusty soil. I remember the colours, the sweet peas, like The Queen Mum’s hats, the citrus Iceland Poppies and the glorious orchids. Whenever I see the towering delphiniums and bold begonias on Blackmore and Langdon’s stand it takes me straight back to that day, even though they are now a part of the Great Pavilion; a rather more modern world. 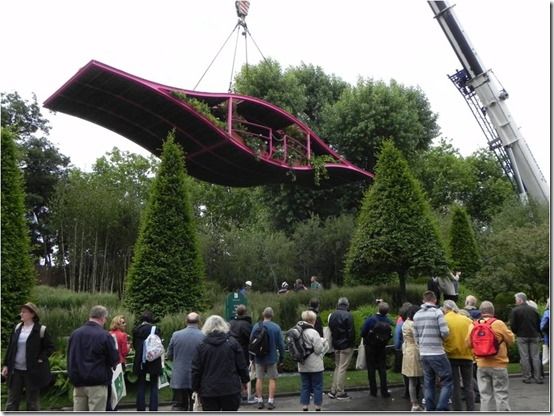 I do not remember anything of the Show Gardens. Probably hardly surprising as they were nothing like the extravagant projects of today’s show. Diarmuid Gavin’s Irish Sky Garden probably epitomises the need to stand out that has become the signature of the outside Chelsea world in recent years. His pink pod, dangling from a crane certainly caught the eye of the crowds, even if many found it rather bewildering. Asked by one confused lady what was going on, as the huge steel structure, dripping with plants was lifted into the sky, I enjoyed explaining that it was just being taken away for a re-spray, because the RHS did not like the colour. Sorry – we all have our wicked moments. 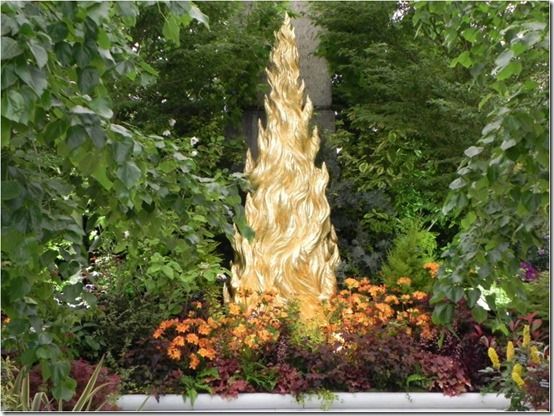 As much as possible in my exhibits for Hillier Nurseries I try to use materials and plants that gardeners can easily access and afford. I think people go to Chelsea to get ideas and it’s great if you see something at the show and can use the idea in your own garden, even if you adapt it. Having said that I do have my extravagant moments; for example when I used Jim Keeling’s Golden Cypress at the foot of the monument in ‘Feel Good about Gardening’. This magnificent terracotta sculpture covered in gold leaf was based on Cyresses by Van Gogh. However, as it was the year before the London Olympics, visitors assumed it was the Olympic Flame; not really surprising as it has an outdoor gym next to it! That’s what I call a win-win situation.

Conversely I’ve also had low budget show stealers. For ‘Adventures in Gardening’, Moroccan Magic was based on Jardin Majorelle in Marrakesh. The pool was made from building blocks with a metal liner, the mosaic was a piece of linoleum, the fountain a cheap birdbath and the pots were cheap terracotta sprayed with car spray paint. The overall effect was stunning and showed just what is possible with a little imagination. 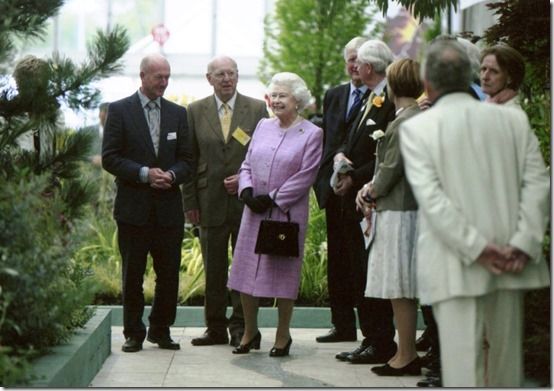 Over the years I have been very privileged to meet members of the Royal Family including Her Majesty the Queen on several occasions. It really is an amazing experience showing your Chelsea Flower Show exhibit to Her Majesty, who always shows great interest and finds something to talk about. She was particularly interested on both occasions we have featured a sporting theme. Last year Duel and the Crown celebrated the sport of fencing and its long association in gardens; including Ranelagh Gardens, part of the Chelsea Flower Show site. We had members of the British Fencing Team fencing during the Royal visit. When they paused and raised their masks, bowed and waited as Her Majesty walked up to meet them, the expression on their faces aid it all. Being part of The Royal Horticultural Society’s Chelsea Flower Show is a very special experience.