Sempervivums, hardy succulents of the family crassulacae are usually referred to as house leeks, or sometimes as live forever, or occasionally hen and chickens. The botanical name sempervivum comes from the Latin word ‘semper’- meaning forever, and ‘vivus’ meaning living. These plants are survivors, able to exist with little soil and virtually no water. 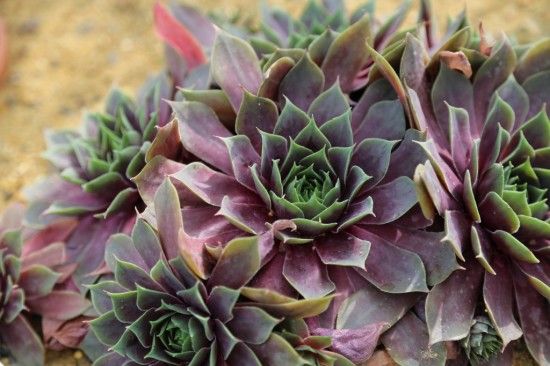 The common name house leek probably comes from the traditional practice of growing them on the roofs of houses to deflect lightning and protect from storms and evil. An interesting idea inspired by the fact that sempervivums were sacred to Jupiter in Roman mythology. So those of you living under sedum roofs are perhaps safer than those of us under traditional tiles? The name hen and chickens refers to the way the rosettes produce offsets, in some cases gradually spreading into extensive mats. This habit has been used in some cases to use sempervivums as an alternative to sedums for green roofs and walls. 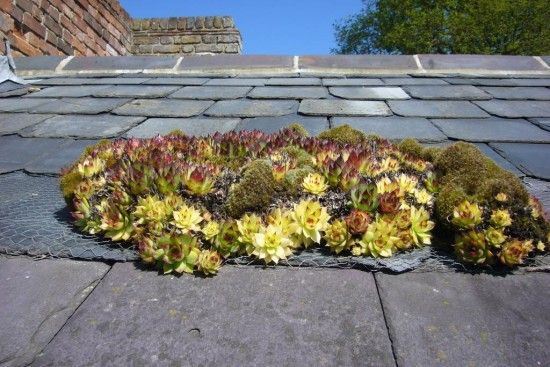 In ancient times sempervivums were used medicinally. The juice of crushed leaves was used to relieve skin conditions incliuding warts, ringworm shingles and insect bites. It also brought relief from burns and scalds.  The Romans used sempervivum juice to spray against caterpillars on food crops and the juice was added to wine to treat against parasitic worms. There wasn’t a lot that sempervivums couldn’t do. 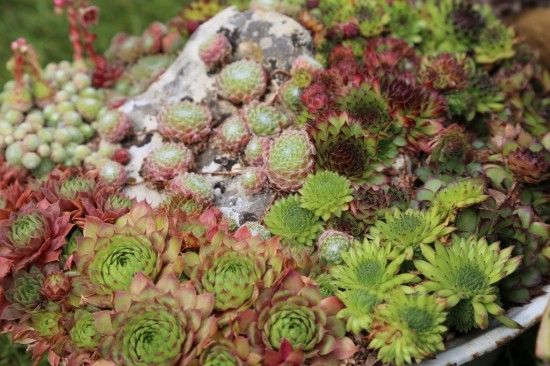 Sempervivums are survivors by nature. They originate in mountainous and arid regions of southern Europe and North Africa where they are often found thousands of feet above sea level. Their succulent leaves arranged in rosettes enable them to survive for long periods without water because they store it and conserve it in their thick leathery leaves. This property has been harnessed by the gardener making these useful plants for containers that get only occasional water, to fill crevices in the rock garden and to create imaginative arrangements with little growth media. In classic gardens you will often find them in pots positioned or grouped around the edge of formal ponds or on walls where they can be left to enhance with little attention. 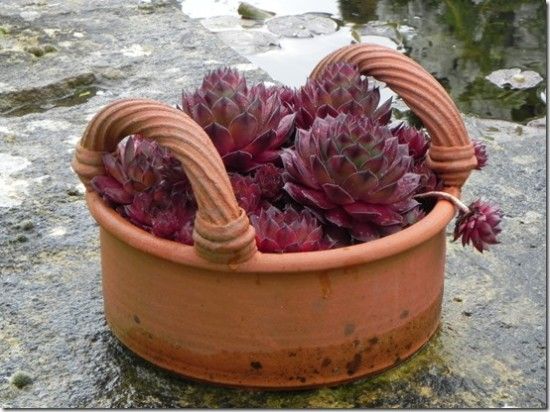 Sempervivums are traditional and contemporary, cottage garden and exotic, house plant and hardy perennial. They are a contradiction of terms in so many ways. To many they go unnoticed – dreary familiar subjects of gardens of long ago. To others they are collectable treasures or perhaps cutting edge vegetable ornamentation. That is their fascination. 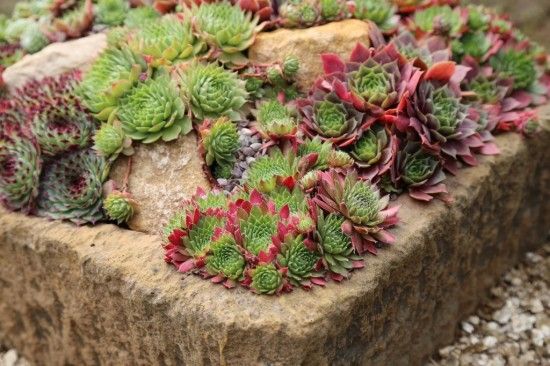 There are about sixty identified species and over three thousand named cultivars. The leaves vary in size and colour in shades of green, purple, red, grey and bronze. The colour is at its best from spring to midsummer and full sun is essential for good colour and growth habit. 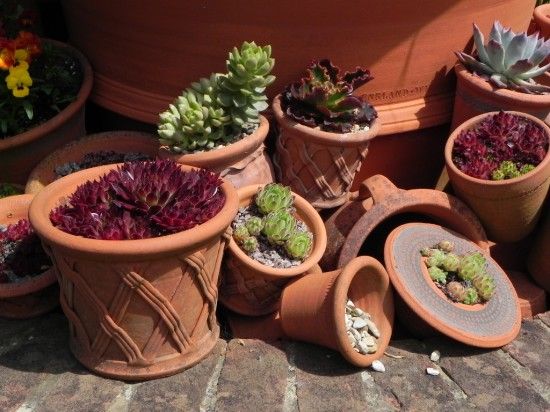 As sempervivums like good drainage they are ideal to grow in shallow stone sinks and in terracotta pans. I always admire them on visits to Whichford Pottery where their subtle colours and strong forms combine beautifully with the warm tones of hand-thrown terracotta pots and pans. Potted in free draining growing medium with a surface coating of grit, stone chippings or terracotta chips they look superb, especially when containers are placed at imaginative angles. Because the plants prefer not to have water hanging around the rosettes this suits them brilliantly. 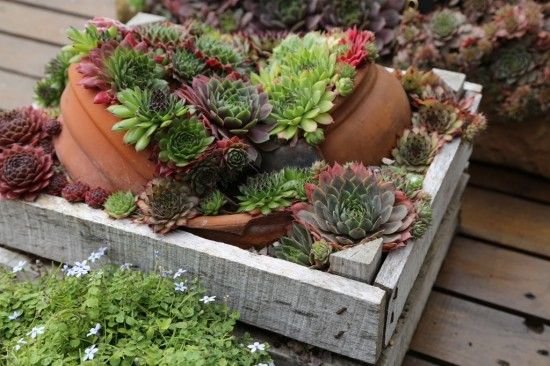 The rock garden at RHS Wisley, Surrey, England boasts a fine display of “semps”. Growing in rocky displays. They are also often displayed in alpine houses, low glasshouses without artificial heat where there is plentiful light and air but rainfall is kept off the plants. I visited recently during the Wisley summer show where specialist nurseries descend on the gardens to display and sell their plants. I discovered D’Arcy and Everest http://www.darcyeverest.co.uk/ an alpine plant specialist with a fine range of sempervivums beautifully and imaginatively displayed. I have to admit I was first attracted to their address: Pidley Sheep Lane, Somersham, Cambridgeshire, in the east of England; certainly a very “old world” name; perfect for a hidden gem of a plant nursery. 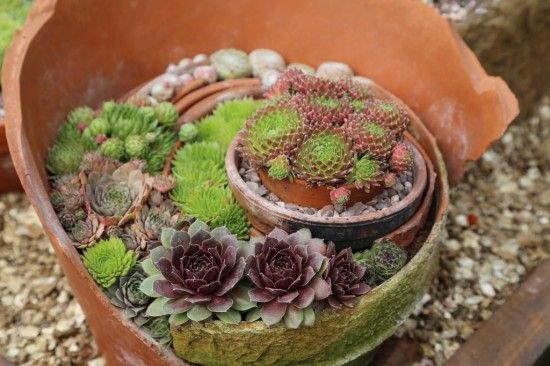 In their compact show stand they showcased sempervivums at their best: in wooden crates, stone sinks and in terracotta. I was particularly taken with the displays using large broken flowerpots, terracotta crocks and small pots placed within. What a great use for that good old crock pot that finally gives up the ghost. Instead of being smashed and stacked over a drainage hole, here it was enhanced and encrusted with vegetable gems. 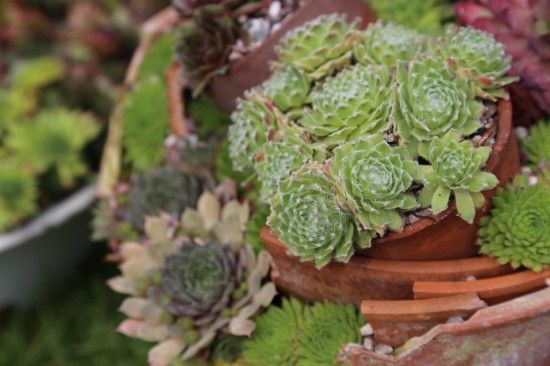 In containers I would use a loam-based growing medium with the addition of some horticultural grit or sharp sand. Sempervivums do not want a rich compost and they quickly lose their character if the growing medium is rich in organic matter and nitrogen; so do not be tempted to overfeed. Generally feeding is not something to worry about. If you think the plants need it a very small application of controlled release fertiliser at the beginning of the growing season is all that is required. 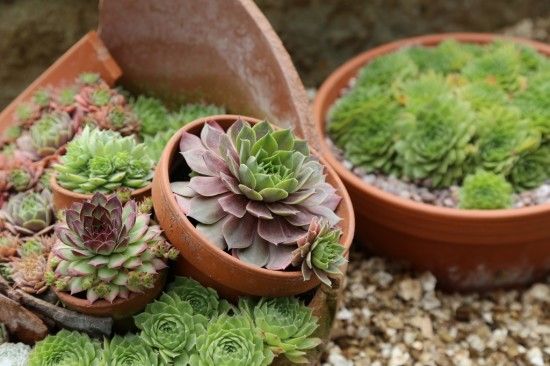 I haven’t mentioned flowers. Yes, they do produce clusters of starry flowers on fleshy stems. The flower is said to resemble Jupiter’s beard but it isn’t anything to get too excited about. A rosette only flowers once and then it dies leaving the small offsets to develop and spread. They do produce fertile seeds and these can give rise to exciting new forms and colours and add to that pool of named cultivars. These are fascinating plants that really can ignite your creative spark in the smallest outdoor space. 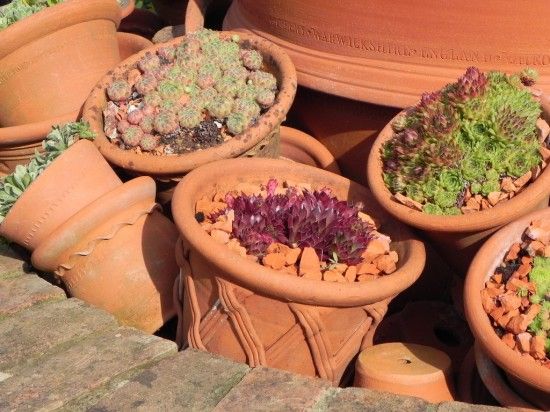