“Joseph and Mary”, “spotted dog”, “lady spilt the milk” just some of the colloquial names given to the early spring flowers, pulmonarias, most commonly known as the “lungworts”. Perhaps it is this rather unattractive handle that has led to the plethora of other common names; even more unattractive when one knows that the name pulmonaria arose from the appearance of the foliage, often green with white spots, resembling a diseased lung: hence the common name “lungwort”. 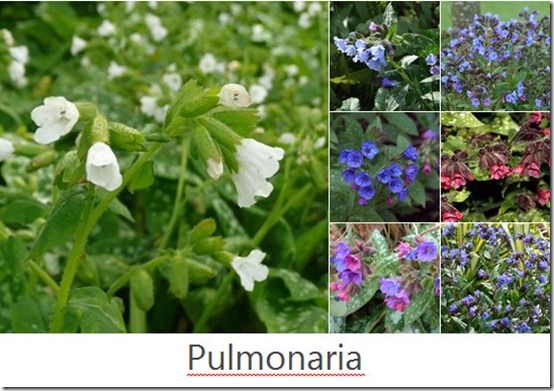 I’ve always been fascinated by these early spring flowers which impatiently start to bloom before the leaves unfurl. As a child I loved the mix of blue and pink neat bells that ours produced just as the first scillas and grape hyacinths started to bloom. I always liked the clusters that were more blue than pink and I was fascinated by the spotty dog leaves.

Pulmonarias are natives of Europe, from west to east, as far south as Greece and north into Russia. They are hardy plants thriving mostly in deciduous woodlands, some preferring moist soils, others from mountainous areas tolerating drier conditions. They have found a place in cottage gardens since early times and also in the apothecary’s garden. Herbalists believed that any plant that resembled a particular body part must have the medicinal properties to cure that part of the body: hence the use of pulmonaria in the treatment of respiratory complaints. Don’t you just love stories about the magical powers of plants?

The pulmonaria used for medicinal purposes is Pulmonaria officinalis. The specific name officinalis means ‘of the shop’, referring to the apothecary’s shop. In the garden the only cultivar of this species widely grown is Pulmonaria officinalis ‘Sissinghurst White’ with delicate clusters of pure white flowers. It is a very pretty plant for semi shade and mixes well with early pale blue chinodoxa and blue Anemone blanda.

Some of the common names of pulmonaria suggest a split personality. As I said some varieties display more than one colour of flower in the same cluster. The pink and blue flowers were quickly embraced as boys and girls in folklore. Pulmonaria saccharata is the most commonly grown of those with dual coloured blooms and the old cultivar ‘Mrs Moon’ is well known and representative of the species: felted leaves, heavily spotted with silver white, and a good mix of pink and blue flowers.

There are a number of pink varieties, mostly with flowers the shade of crushed strawberries. Pulmonaria ‘Leopard’ is one such variety, a cultivar of Pulmonaria saccharata with lovely early spring flowers of deep pink and lives up to its name with very well spotted leaves.

I have to admit my favourites are pulmonarias with intense blue early spring flowers. Last weekend I was planting a few pots of the gentian blue Pulmonaria ‘Blue Ensign’ alongside a pond with Carex ‘Evergold’ and the marsh marigold, Caltha palustris. That rich blue with the soft green and yellow leaves of the carex and buttercup flowers of the caltha should be the ultimate spring combination. Even after a spell of freezing weather the pulmonarias were already impatiently opening their early spring flowers.

Pulmonaria species are propagated by seed and sometimes, unreliably, so are some of the cultivars. Most quality plants are however grown from root cuttings or micropropagation, in this way the offspring are identical to the parent. Buy Pulmonarias as strong pot grown plants when they are in flower or leaf, that way you can be sure of what you are getting; there are plenty of varieties to choose from.

Here is a selection of good varieties:

Pulmonaria ‘Roy Davidson’ is a seedling of Pulmonaria ‘Bertram Anderson and probably Pulmonaria saccharata which arose in the garden of plantsman Roy Davidson. This variety has the most heavenly pale, ice blue flowers in great profusion. The foliage is healthy, narrow and strongly spotted; an altogether excellent garden plant.

Pulmonaria obscura ‘Opal’ is worth of note for its wonderful silver centred leaves and pearly-blue flowers.

Gardeners are also starting to recognise the value of pulmonarias as foliage perennials as well as for their early spring flowers. The plants are virtually evergreen, if they lose their foliage it is only just before the new season’s growth begins. The leaves can be spectacular, as striking as any hosta and what is more, unattractive to slugs!

Pulmonarias are easy to grow and long lived. They are useful plants to combine with ferns, early bulbs, vincas, and other groundcover plants. They are excellent to bring early interest to the front of the border, or between deciduous shrubs. The plants need little attention and seem to be fairly pest free apart from a little powdery mildew on the foliage in mid summer that does not seem to worry them.