Single stemmed fruit trees, grown like free-standing cordons are nothing new. Ballerina apples have been around for a few years; their appeal is their slender habit which takes up little space in the garden. Traditional fruit trees need room, even when grown on a semi-dwarfing root stock. Gardens are getting smaller but gardeners still like the idea of picking their own fruit fresh from the tree. Up until now new varieties of space saving tree have not been renowned for the quality of their fruit, so Starline Apples, a new generation of columnar apple could be big news. 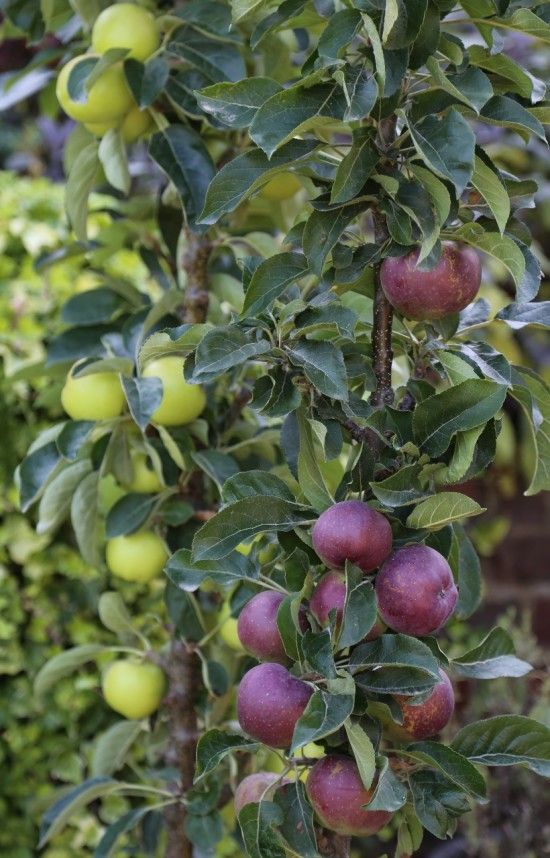 These heavy-cropping varieties produce full sized-attractive apples of good flavour.  Fruiting buds develop on the whole length of the stem from just above ground level to the tip.  They are self-fertile, which is a huge advantage, so you don’t have to worry about having other apples that flower at the same time that will act as pollinators. However they will also be pollinated by other apple trees and ornamental malus varieties which can further enhance their productivity. 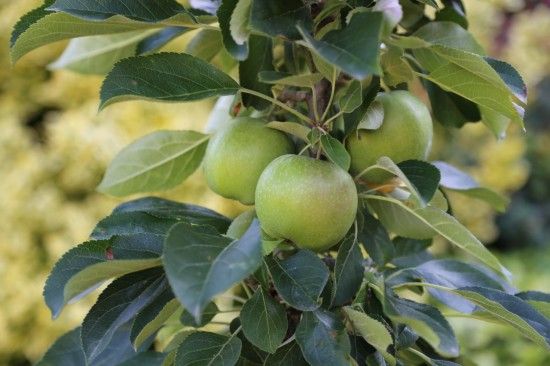 Pruning baffles most gardeners. In the case of apples summer pruning, followed by winter pruning, to build up fruit bearing spurs sounds challenging. Particularly when there are spur and tip bearing varieties and you are supposed to remember what you planted. Starline apples are easier to prune. In summer side shoots that develop should be pruned back to two or three buds to maintain the columnar habit and develop more fruiting spurs. It is as straightforward as that. 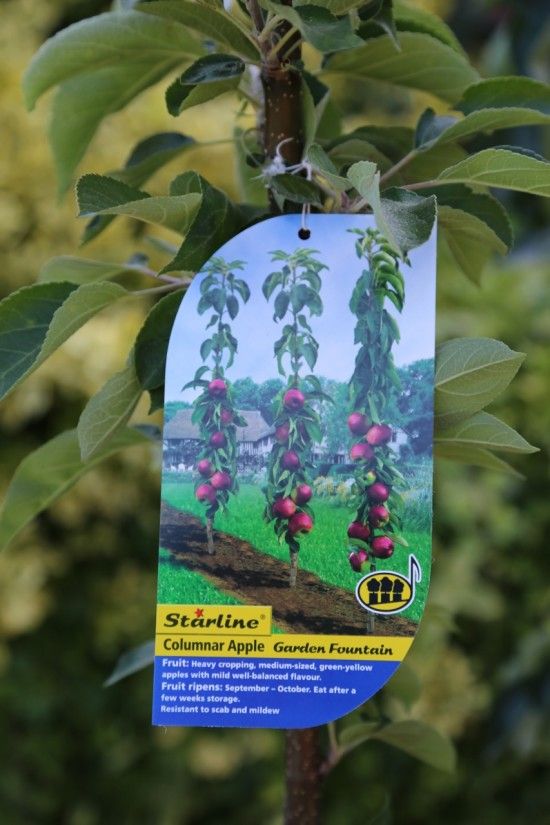 These are space saving trees that are ideal for small gardens or for pots and containers on the patio.  If growing in a pot you need a large deep container and loam-based growing medium. Don’t forget you will also need to feed once or twice a year with a balanced slow-release fertiliser. Rose food is ideal because it has plenty of potash for fruit formation and apples are the same family as roses anyway. 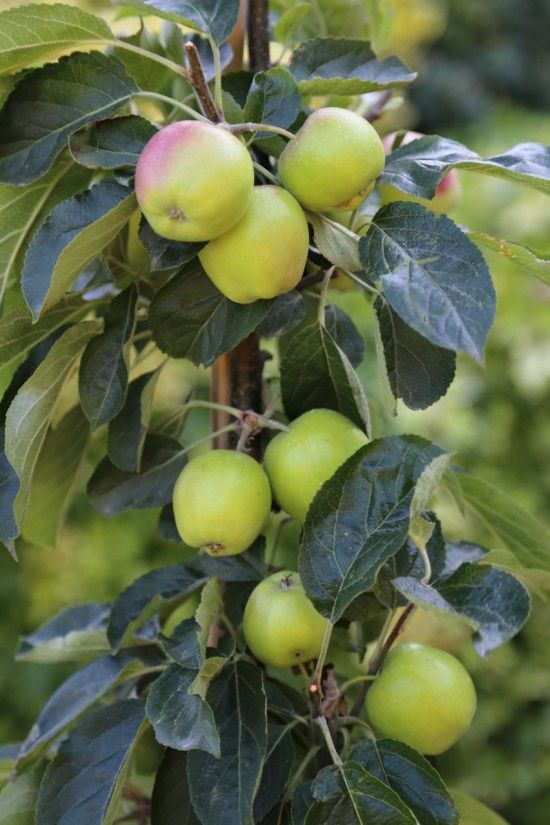 In the open ground Starline apples will fit into narrow beds and borders. They can be used to add height to planting and can be underplanted right up to the base of each tree.  They will need staking and I would recommend permanent, substantial support. When laden with fruit they can easily rock in the wind which will damage the roots. They are probably not ideal for windy exposed sites but no apple trees really are.

I often see fruit trees planted in grass and more often than not they are struggling. The base of the stem is easily damaged by careless mowing and strimming if grass grows right up to the tree. This also competes with the tree for water and nutrients. So if planting in grass, keep a circle at lease 60cm, 2ft wide of clear ground around the base of the tree and keep the tree well-staked, fed and watered. 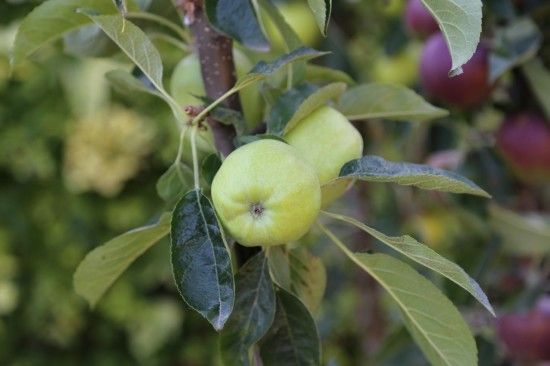 There are five varieties of Starline apples to choose from and these are the descriptions as they appear on the labels:

Heavy Cropping. Purple-blue apples with juicy crisp flesh and a sweet/sharp flavour. August-September. Resistant to scab and mildew. Keeps for a few weeks in storage. 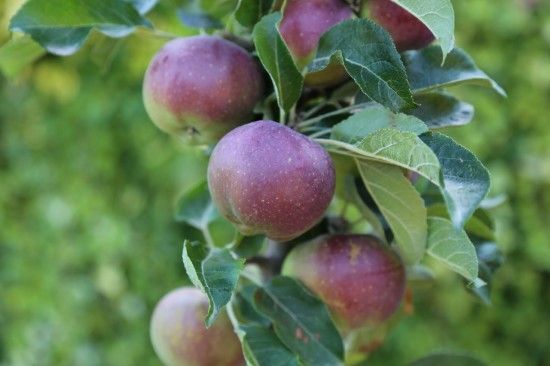 When it comes to appearance Blue Moon is undoubtedly the most striking with its large purple fruits that mature early. I’ve only tasted this one so far, and a little before it was fully ripe. It was very firm and crisp, quite sharp and with a good flavour. I liked it and I would grow it.  I also think the fruit colour is very attractive in the garden and it would fit in easily with other planting. 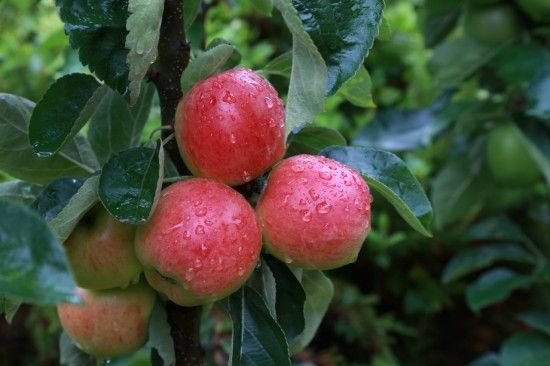 The other really striking variety for fruit is ‘Fire Dance’. The apples are bright and striking and as attractive as any ornamental malus variety. Their orange-yellow hue makes them a useful addition to the autumn garden and I can see them with rudbeckias, crocosmias or amidst late flowering nasturtiums on the vegetable patch. 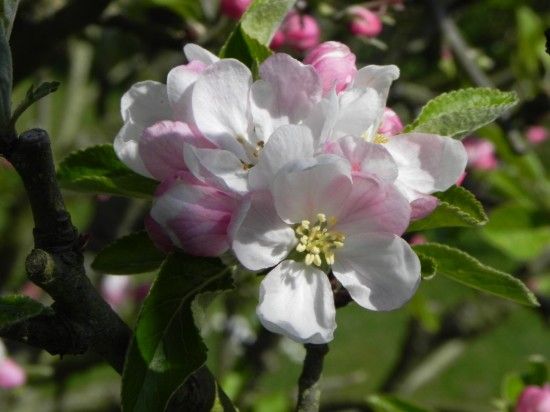 All the Starline varieties have a mass of typical apple-blossom flowers, so they are great spring nectar sources for bees and pollinating insects. If you are looking for a very small flowering tree then one of these apple trees may be the best choice rather than a small ornamental variety.  If you only have space for one, remember these are self-fertile so they will fruit when planted on their own.