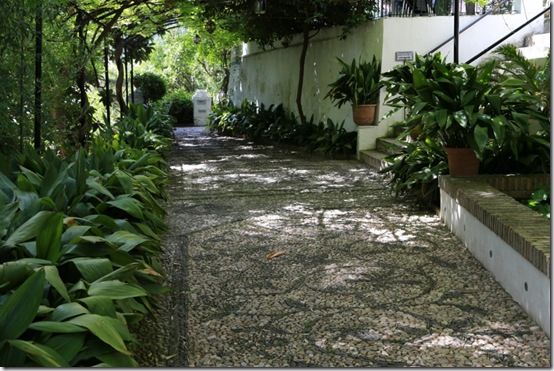 During my recent visit to Grenada, Spain, I was keen to find some Moorish gardens other than those of the famous Alhambra and Generalife. I came across an article from The Guardian dated 2008 outlining the city's 10 best Moorish secrets; to my delight the top two were gardens so we set out to explore.
The first claimed to be Granada's best preserved Islamic spot. The Carmen de la Victoria took some finding as it is not promoted as open to visitors and is off the main tourist trail. We missed it in the first attempt but found it on the second: a peaceful Carmen behind a wall and accessed through a locked gate, you need to ring the bell to gain entry. 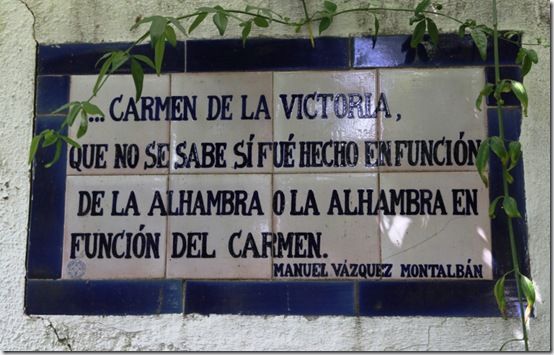 Carmen derives from the Arabic for a garden planted with vines. It is specifically Granadan for a villa and Carmen's abound through the Albycin, the old Moorish quarter of the town on the hill facing the Alhambra. These private gardens tantalise with the dark green spires of cypresses, the sound of water and colourful plumbago, bougainvillea and campsis tumbling over rendered walls. Other than that they remain out of reach and hidden from the outside world. 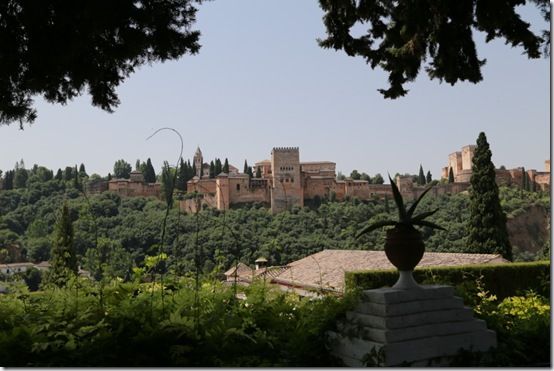 The Carmen de la Victoria is on a site once occupied by a convent. Now owned by the University of Granada and used as guest accommodation the gardens retain an Islamic influence and the peace, calm and simplicity you would expect. With stunning views across to the Alhambra the ancient fortress undoubtedly casts its spell here as it does throughout the ancient city. The article I read claimed the garden was restored and replanted with plants popular in Nasrid times (some 600 years ago or more). I doubt this is still true as others have crept in and as with many gardens compromises have to be made to maintain an overall effect. 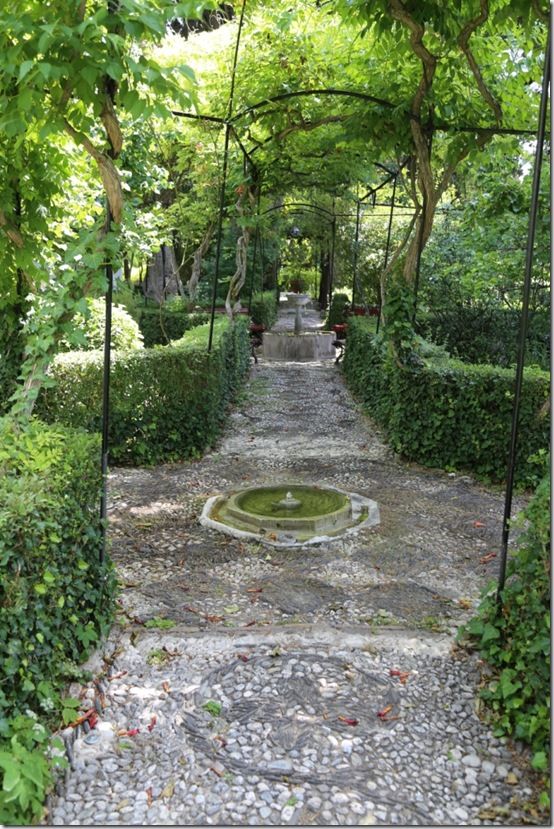 Most of the garden is shaded from mature trees and wisteria and vine clad pergolas.  Certainly one wisteria with an enormous twisted trunk and substantial contorted branches appears to be a great age. Formal beds edged with box create neat parterres in a randomly ordered way: time and tree roots have charmingly shuffled their symmetry. Irises and agapanthus add different forms and textures, sadly not when we were there but their colour seems somewhat unnecessary in the bright light and heat of a Granadan summer's day. 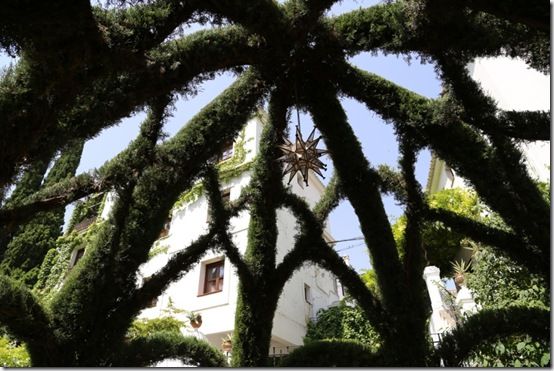 An amazing gazebo of trained Cupressus sempervirens, the cypress of the ancients, creates a lantern above a low gently bubbling fountain. Cupressus shaped into arches seems to feature in many gardens; it almost works. Usually upright pinnacles of dark green on the landscape they seem to lend themselves to trimming ad training, this also removes the heavy comes which disarrange the small branches often giving them a somewhat shaggy appearance when left to grow naturally. 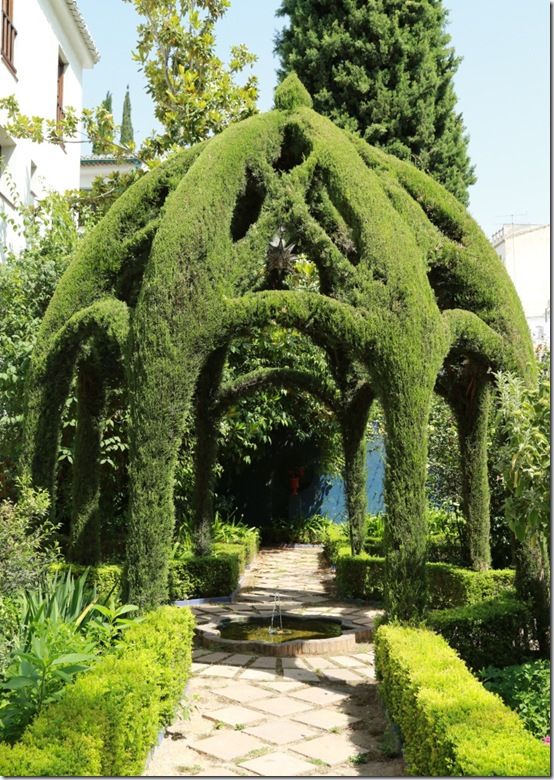 We had the Carmen to ourselves, so the feeling of an Islamic garden was more evident than in the more touristy gardens of the Alhambra. The same is true of the Carmen de Los Martires. This is a 19th Century villa just below the Alhambra with gardens virtually adjoining the Generalife. It is off the main tourist radar with restricted opening hours - generally two hour periods during the day and evening. It's best to keep an eye on the clock; lovely as it may be you would not want to be locked in. 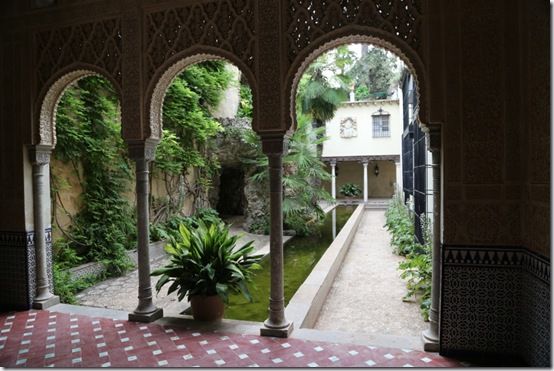 The garden has parterres, grottoes, statues and wonderful views across the city and back to the Alhambra. Romantic it may be but garden lovers will find themselves yearning to give it a little care and attention. The sunken courtyard garden under the shade of ancient palms surrounds rather a magnificent fountain, sadly in need of restoration. 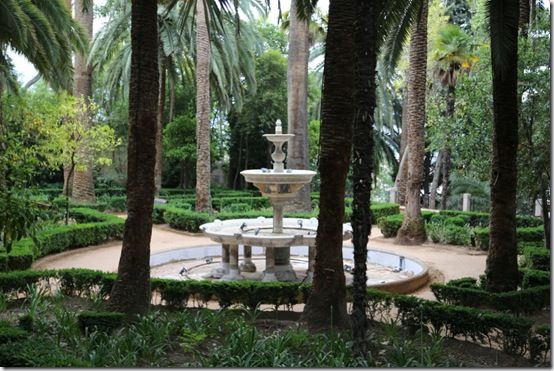 The lake fed by an interesting aqueduct could be lovely with it's ruined tower and bridge. Sadly overgrown tree roots have fractured the edge resulting in low water levels somewhat damaging it’s magic. 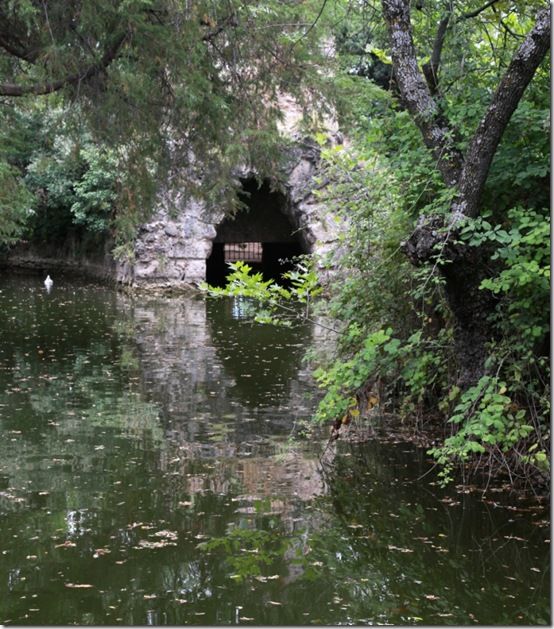 Having said that the main formal garden with its box edged beds and central fountain is rather lovely. We saw it on rather a cloudy late afternoon and I would have found it less melancholy sparkling in the Andalucian sunlight. I can also imaging it is more magical in spring, before the foliage gets dusty and tired. The Alhambra and surrounding woods are so extensively irrigated the foliage remains fresh and verdant; quite unlike the greenery of most southern cities in midsummer. 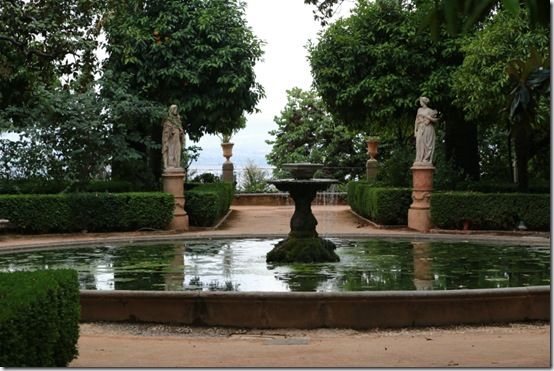 The Carmen de Los Martires may seem a little sad; perhaps that reflects its past history when the site was used to imprison Christians in caves in the time of the Moors. Today its magic is its peace and quiet after the busy Alhambra; we shared the garden with a few visitors and locals and a rather proud but reluctant peacock. 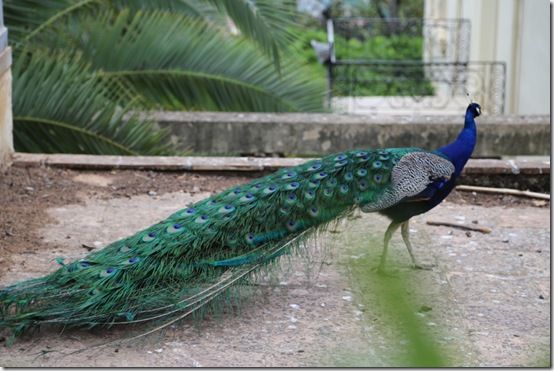