This is a magical time of the year. As the days get shorter, nights longer, and weather grows colder, here in the Northern Hemisphere the natural world changes. Halloween, a celebration of the supernatural may just mean a carved pumpkin on the doorstep, and leaves blowing across the lawn, but the power of plants goes further. Since ancient times man has recognised the magical powers of  medicinal plants, trees, flowers, herbs and vegetables:

Do you like butter? - A yellow reflection on the chin from a buttercup will tell. The systematic removal of petals of a moon daisy decides the course of true love. Just folklore or is there an element of truth?  Probably not, but in the case of other plants folklore is weaved with stronger yarn…


In my garden, under the powerful oak trees, long associated with the Gods of thunder, foxglove seedlings are growing beneath the faded bracken. I love this plant and allow it to wander at will in the rick leafmould beneath the tree canopy. Perhaps I’m a little cautious of its powers? 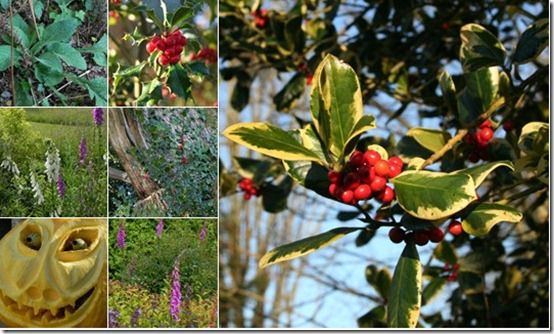 Digitalis purpurea, the foxglove, goes by many local names: “Goblin’s Thimble”, “Fairy Fingers” to name but two. Common names vary from region to region. In Germany the native word for Foxglove is “fingerhut” meaning finger hat or thimble. (In the mid 1500s German herbalists latinised their name for foxglove into Digitalis from the word digitus meaning finger.) Folklore suggests that the foxglove was originally called folk’s glove. Folk being the little people from the forest who distributed the bell shaped flowers to foxes to wear as gloves when raiding chicken coops.

Digitalis purpurea is a biennial. In its first year  Digitalis purpurea grows and produces a strong rosette of leaves and builds its food reserve. The following spring, after a moist winter, it is ready to grow, flower and set seed before water supplies dry up and the leaf canopy covers and robs the sunlight. It is magic the way plants adapt: rarely will you see  Digitalis purpurea eaten by deer or rabbits, and rarely infested with insect pests. The reason is that it is poisonous; very poisonous in all its parts. 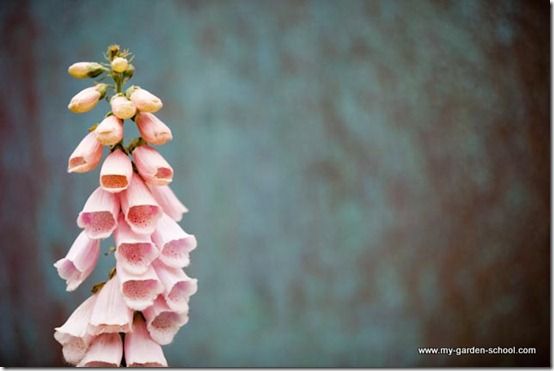 However, although it is poisonous the leaves of  Digitalis purpurea contain cardiac stimulants, the most important of which bears the name of the plant: digitalis. A Dr. William Withering discovered digitalis in 1775. One of his patients had a bad heart condition with no prospect offered but death. Undeterred by the diagnosis the patient went to see a local gypsy and took one of her herbal potions; herbal teas were often successful in curing diseases where the medical profession failed. The patient was rapidly cured and the doctor set out to track down the gypsy. After much bargaining she revealed her secret: the tea contained many things, but most potent was the dried leaves of the magical purple foxglove.

“Dropsy” was another disease of the day, characterised by abnormal swelling of the legs. Doctors failed to treat it so patients turned to a certain old woman for her special tea. A few infusions and patients were cured, the swelling subsiding rapidly.  Dr. Withering tracked down the old woman and studied her ‘miracle’ medicinal plants cure.  Twenty herbs went into the infusion of medicinal plants but the active ingredient once again was the magical purple foxglove Digitalis purpurea . Dr Withering worked on the dried leaves and studied their potency when gathered at different times of the year. His work was the foundation of the use of this important drug we use today. He became known as “The Flower of Physics” and a foxglove is carved on his tombstone.

A lovely story, but some spirits lay less peacefully than the Doctor beneath his foxglove decorated tombstone. What of Vampires? Surely this is the season for them? Reach for the garlic! 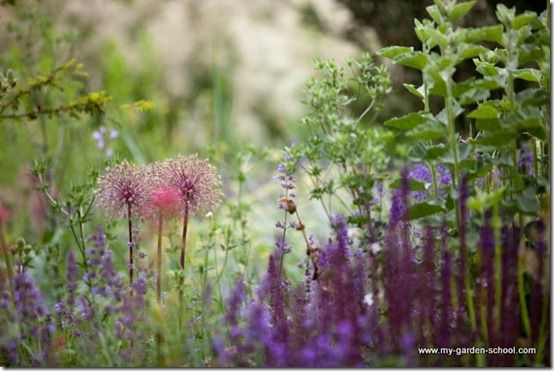 Garlic is attributed with the power to weave white magic and repel the evil forces of black magic. It has long been used against vampires and the plague. In some parts of the world mothers use a clove of garlic to protect their infant children from the “evil eye”.

Other members of the onion family are regarded as equally powerful by different cultures.  The Ancient Egyptians held onions in high esteem.  The onion bulb with its layers was a symbol of the universe. The inside of the bulb, the underworld was surrounded by the earth and that in turn by the universe.  Oaths were taken on onion bulbs and they were offered in sacrifice to the Gods such was their importance. 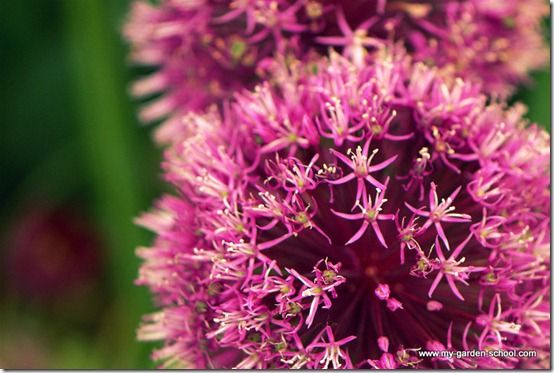 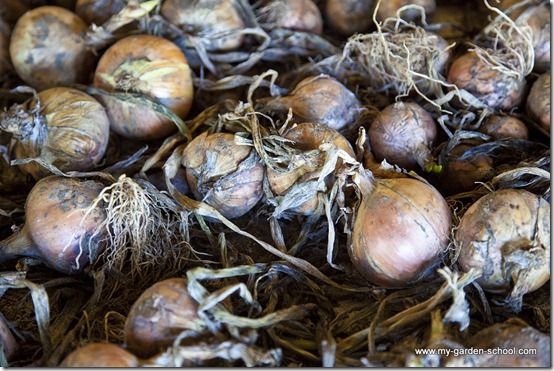 Maybe it is the magical powers of the allium family that keep away pests in our gardens rather than just the onion smell?

When witches fly on Halloween which plant can we employ to keep them, and other evil spirits at bay?  Folklore decrees that Holly is effective. Holly, Ilex aquifolium, is often found planted at country cottage doors and gateways for just this purpose.  Hollies are often left to grow freely in country hedgerows, rather than being trimmed with the rest of the hedge.  This is because they prevent the witches from travelling across the countryside; those that have not taken to their broomsticks run along the top of hedges so the hollies stand firmly in their way.

The magical reputation of holly probably stems from Ancient man’s wonder at how this plant kept its leaves and even bore fruit when the earth stood like stone and deciduous trees and shrubs were stripped of their leafy mantle.  He cut holly branches and used their prickly and magical properties around animal pens to keep wild animals and evil spirits away.  I wonder if the witches were around then.  And how do you keep them away on Halloween in North America whereIlex aquifolium isn’t hardy?  Does the tougher Ilex meservaeae have the same magical power, or do you have other powerful plants other than pumpkins to keep you safe on Halloween? We would love to hear about them!