Rather late in spring I planted some lilies; not the best time as by then the bulbs were rather shriveled and were shooting vigorously, showing their eagerness to get into the ground. So I gave them a good start and planted the bulbs on their sides, about three times the depth of the bulb deep in the ground. Not all grew, but the appearance of the survivors encouraged me to write this blog. True lilies, their allies and namesakes are exotic, colourful and some of the most dramatically beautiful summer flowers. Although they may be more popular as cut flowers than they are as border plants, there is no doubt that they add a touch of class to the summer plant palette. 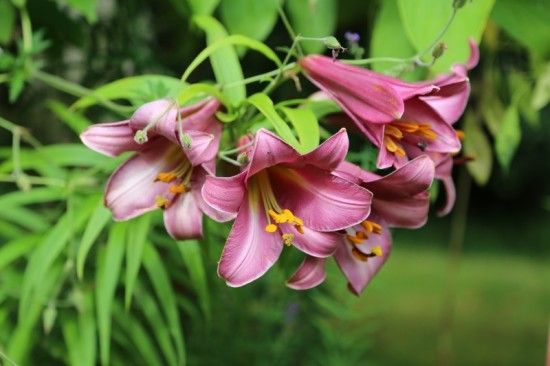 The lilies I planted this year are some of the old trumpet flowering varieties. Personally I like the trumpet flower form and have a certain affection for these, maybe because I have sold them every year for the past forty years. Lilium 'Pink Perfection' is a wonderful, deep, bruised pink; a kind of fruity colour that suits its heavy fragrance. Tall arched stems carry heads of pointed buds which open into a tightly held chorus of blooms, punctuated by deep orange stamens. 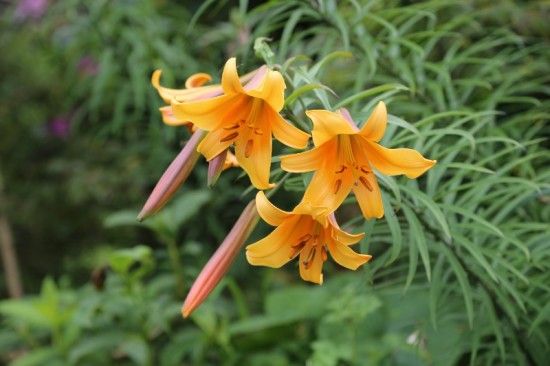 Lilium 'African Queen' is another old favourite with rich copper blooms on tall dark stems. When I've grown this lily before it has reached great heights up to 6ft, 1.8 metres. This year it is better behaved at only two thirds the size. When I came to plant it I'm afraid it was allotted an available space, rather than one which would make the most of its colouring. Next year I'm going to plant it against the deep copper foliage of Physocarpus opulifolius Diable d'Or'. 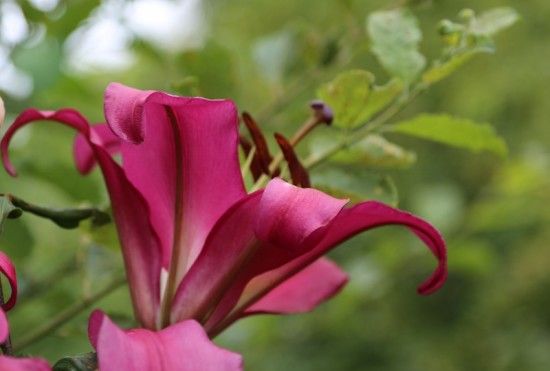 Lilies are inexpensive to buy as bulbs in late winter or early spring and they are easy to grow. However they are not just one season wonders, unless that's how to use them. Given a good mulch with garden compost or well-rotted manure and a general purpose slow release fertiliser they will perform for years. They are remarkable survivors. A clump of deep crimson lilies blooms freely on my compost heap every year. They do depressingly well, and I always wish I had paid a little more attention to keeping them free of lily beetle. 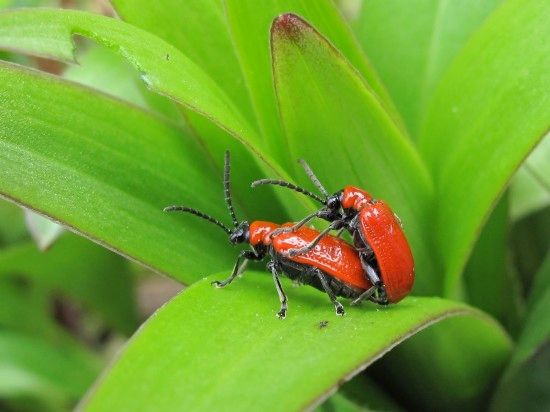 Lily beetle has become a serious pest in the UK in the past few year. I'm not sure if it is found elsewhere in the world, perhaps you could let me know. The little scarlet beetles appear in early summer. Pretty as they are they are horribly destructive nibbling at leaves and buds. What's more they lay their eggs, which develop into hungry larvae that cause untold damage and can devastate your plants. Best control: pick them off and squash them. Remember, when you see one there is always another, they are usually together focused on producing the next generation, if you know what I mean. 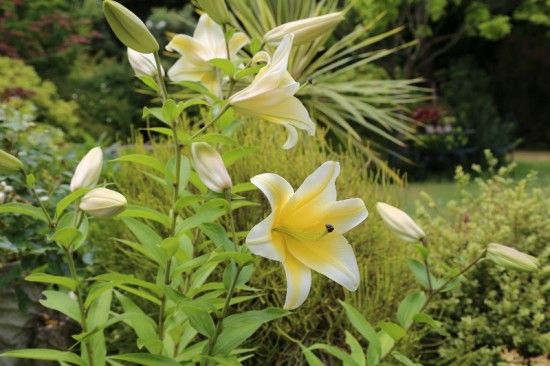 Most lilies make excellent subjects for pots. These soft yellow, deliciously fragrant lilies are in their second season and despite being crammed into a small container they are performing beautifully once again.  I did top up the growing medium in the pot and add some slow release fertiliser in early spring and I've picked off any beetles. They do have attractive dark stamens, but we cut these out for two reasons. The pollen stains badly if it gets on to skin and clothing. Near the house it is easy to keep an eye open and cut out the stamens as the buds open. Secondly the pollen can be a risk to cats, and we have four. If it gets on to their fur and the wash themselves it can be very harmful. In reality I think this is more of a problem with a vase of lilies in the house; cats are not likely to come into contact with the pollen of tall lilies growing in the garden. However if you don't want to take any chances treat them like this. 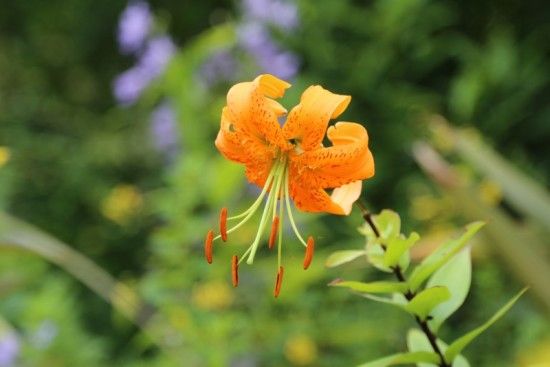 Lilium henryi is what I would call a tiger lily; orange blooms with reflexed petals, heavily spotted black and prominent stamens. The blooms are a classic 'Turk's cap' shape and are elegantly poised on arched stems. This is a super lily for hot planting schemes including crocosmias, rudbeckias and heleniums. I also love it with blue campanulas and perovskia 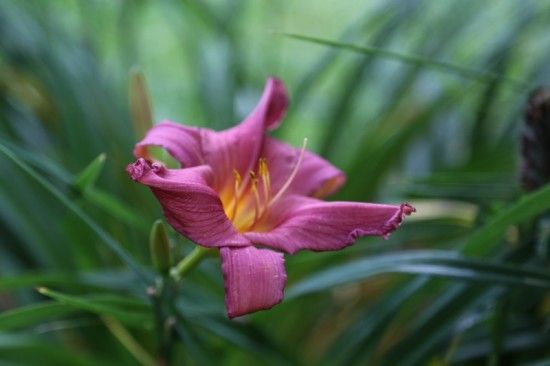 Other “lilies” that are performing in the summer garden include the day lilies, varieties of hemerocallis. These are herbaceous perennials which form clumps of narrow grass-like leaves with string stems carrying blooms that open in succession just above the foliage. They are easy to grow and reliable and come in a wide range of colours. Maybe their worst attribute is that they do not clean themselves nicely: the faded flowers hang on in the flower clusters and they need a regular pick over to look at their best. The individual blooms are short lived, hence the name, but they are quickly replaced as they fade. Once a member of family liliaceae they are not classified in family xanthorrhoeaceae. What a mouthful> 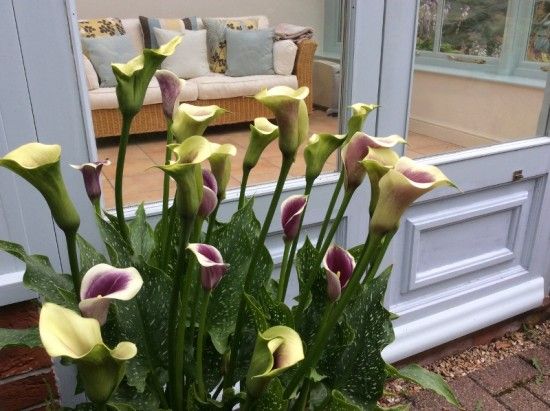 The calla lilies are also closely related, but are not in the lily family. These are in family araceae. The best known, the arum lily, Zantedeschia aethiopica is not the most popular in the modern garden. Colourful flower forms of compact habit, such as ‘Picasso’ have risen to stardom through the popularity of their blooms as elegant cut flowers. The best varieties are remarkably hardy and free flowering for such an exotic garden subject. They are wonderful in containers in sheltered situations. Start them into growth in the conservatory and then move them outside from late spring. 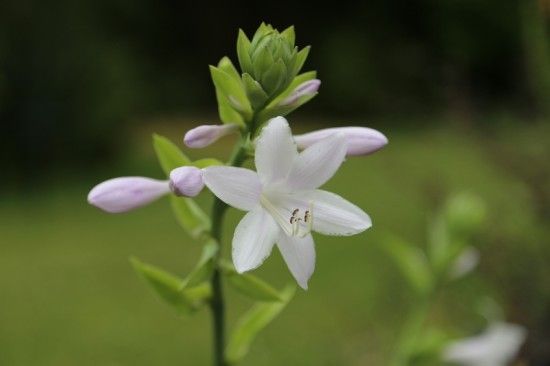 Finally a mention for hostas. Normally grown for their attractive foliage (much loved by slugs and snails!) hostas were once classified in the lily family but now I believe are in asparagaceae. Maybe their relationship with one of our favourite vegetables is why the molluscs find them so irresistible? Anyway, despite the fact they are grown mainly for their leaves the flowers of some varieties are really lovely and add to the contribution of exotic blooms that lilies and their relatives make to the summer garden.