Abbotsbury, just one mile from the sea, behind Chesil beach on the south coast of England is known for its sub-tropical gardens and its swannery. On the edge of the Jurassic Coast, a world Heritage Site it nestles on the edge of an ancient landscape bordered by fossil-rich crumbling cliffs. Looking down on Abbotsbury, St Catherine’s Chapel, emerald fields and endless beach and sea there is no indication of the lost tropical world contained within the shelter of the gardens.

The gardens date back to the late 18th Century and the long gone Abbotsbury Castle. Today only the walled garden remains amidst a semi-wild woodland garden of palms, rhododendrons, eucalypts and towering oaks. Despite the apparent maturity Abbotsbury Garden suffered devastating damage in the gales of 1990 and today shows the benefits of an extensive restoration project.

I visited in unusually warm, but rather damp weather in late October. Heavy rain in the morning was followed by warm bright sunshine resulting in steamy conditions which only added to the tropical effect of the landscape and planting. I have to admit this was my first visit, despite the fact it’s not too far from Hampshire where I live. Abbotsbury is quite well known, but not necessarily regarded as a “must visit” garden. I was surprised how good it is and what a wealth of plant material it contains. Entering the garden is entering another world; more like Madeira or possibly one of the Cornish gardens; a wonder to enjoy, rather than a place to get ideas for your own plot. 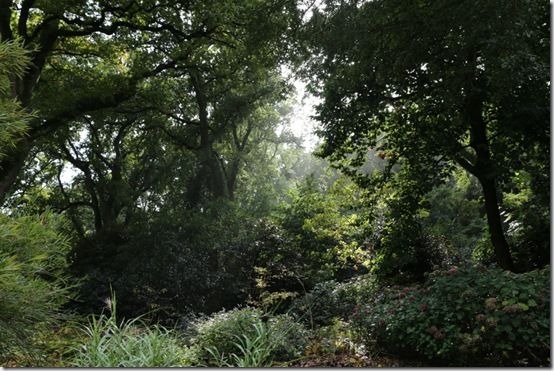 One of the first things that stuck me was how little autumn colour there was. While most gardens are well into fall Abbotsbury is still green, lush and tropical, with plentiful palms, cordylines and tree ferns. A variety of conifers and bamboos add to the evergreen interest. One of the first big bold evergreens that caught my eye was a gold variegated Fatsia japonica. I think this is Fatsia japonica ‘Murakumo-nishiki’ which I have never come across before. I have to say “I think it was”, because the garden is not well-labelled. For the plantsman this is a bit frustrating at times, especially as there are so many rare and unusual subjects. 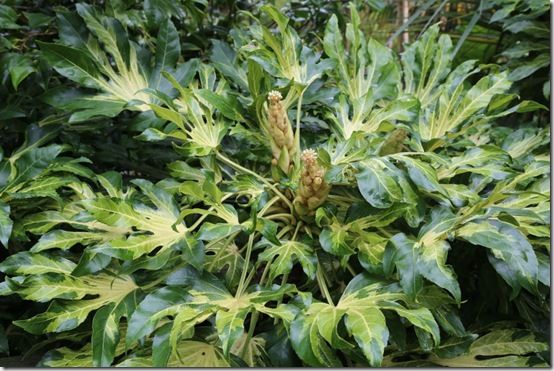 I also spotted some excellent specimens of the semi-climbing evergreen x Fatshedera lizei. The variegated form is particularly striking and seems to love climbing the fibrous trunk of Trachycarpus fortunei, the Chusan Palm. There are several towering specimens of this, the hardiest palm in the British Isles. These seem to have escaped the ravages of storms and grown on to impressive maturity. 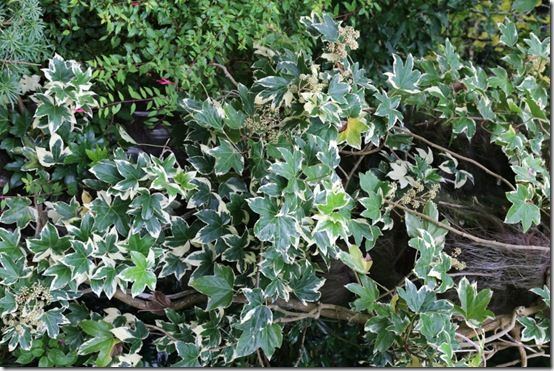 Younger specimens feature throughout the gardens, including one magnificent plant alongside the Japanese summerhouse alongside the Himalayan valley. In places such as this one can’t help feeling that the vistas would be improved by the removal of some trees. This would be a hard decision to take, particularly as many contribute to the shelter of the gardens; also they have survived the ravages of storms so why should the gardener be their downfall? 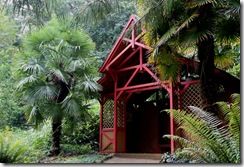 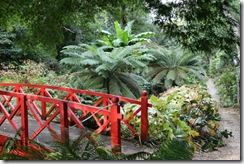 A stream crossed by red lacquered bridges flows from a large pool complete with fallen jungle trees. The valley is filled with the tree fern, Dicksonia antarctica, bananas, palms, gunneras, rodgerias and a host of moisture loving plants. The effect is dramatic because of the tall trees that surround the valley and the dark evergreen oaks which provide shelter and contribute to the micro-climate. It reminds me of the jungle at Heligan, but it is somewhat more impressive for being less well known.

There are many iconic mature trees throughout the gardens. Superb cork oaks, Quercus suber are all the more spectacular for not having their bark harvested. Magnolia grandiflora was still producing its vast lemon-scented blooms. Cercidiphyllum japonicum filled the air with the smell of burnt caramel. The katsura, or candyfloss tree is well known for its sweet scented leaves in autumn. Here at Abbotsbury the heart-shaped leaves had turned to apricot gold; a contrast against the dark surrounding leaves of Quercus ilex and fan palms. 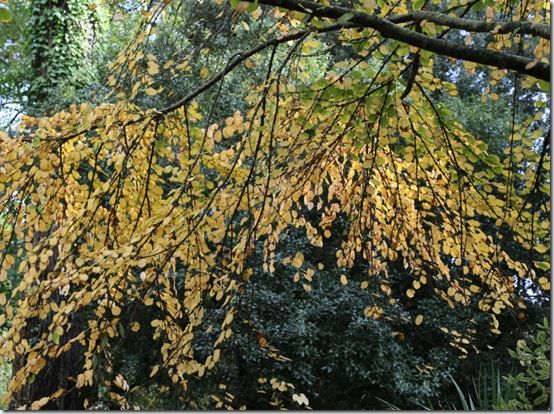 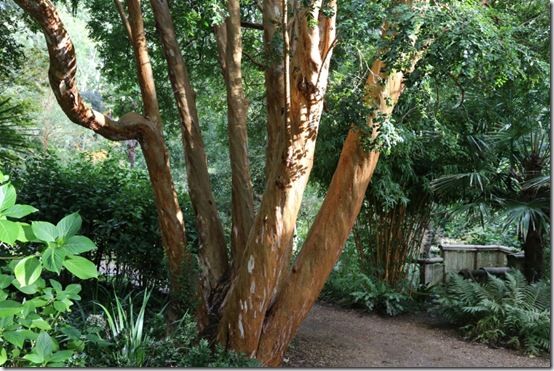 The occasional silky flash of a golden pheasant lights up the tropical greenery. These are rather reminiscent of my visit to Tresco earlier this year. Trying to get a decent photograph is a time consuming occupation, particularly when there is so much of the garden to see. 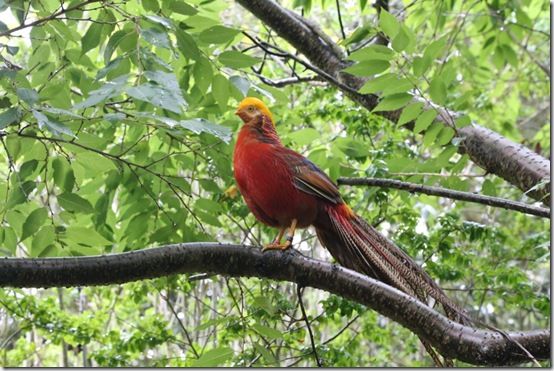 The sculpture garden is interesting but not a highlight. Where the pieces can be isolated against the landscape they are effective but I suppose I’m never a fan of conflicting sculptures gathered together on plinths. A Buddha overlooking the tropical valley was surprisingly effective when seen in isolation from his companions. 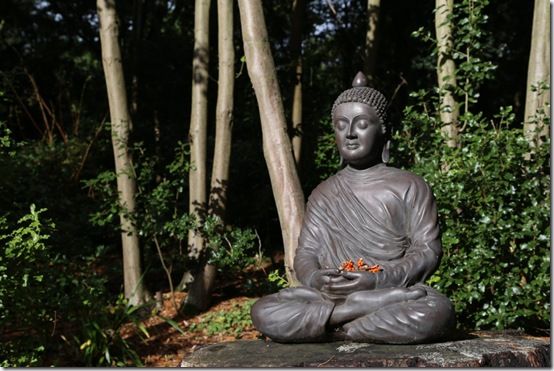 Away from the moisture and shade of the trees there was more fall foliage colour in the open lawn area which led to a series of impressive formal pools. However throughout the garden gem-like fruits and berries hang from the branches. The white marble fruits of Sorbus cashmeriana were shining with dripping moisture left by the earlier showers. I found this exquisite berberis with opal fruits all along the branches. I don’t know it so any clarification would ne gratefully received. 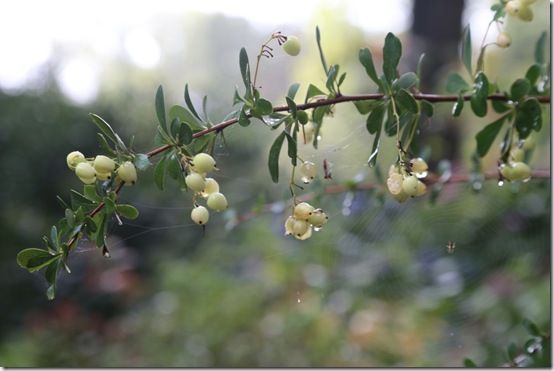 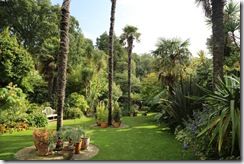 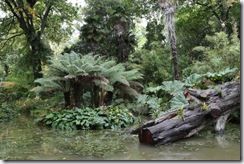