I love to see what is in bloom in my garden each year on Christmas Day. Many gardens record this, partly for fun, and partly because it’s such a useful indication of the state of the season. This has been such a warm December here in the UK; unseasonably mild. Some will put this down to global warming, others, just one of those things. One thing is certain, many winter flowering plants, such as the sweetly scented Mahonia japonica are blooming 6-8 weeks earlier than they normally do. I always associate the lily-of-the-valley scented blooms of this mahonia with February, but here we are in December and some of the earliest flowers are already dropping. 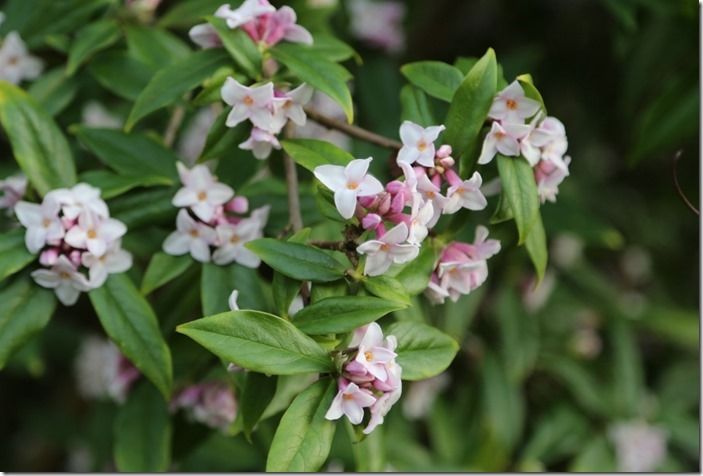 The incredibly scented Daphne bholua ‘Jacqueline Postill’ has been in bloom for about three weeks; already the ground beneath each shrub is covered with small lilac blooms that have fallen. The fragrance fills the garden in the same way that it usually does as it finishes flowering in mid spring. Normally the first buds start to burst in late January; this year it was two months earlier. Yes, its lovely having the fragrance now but I shall miss it after Christmas. It is odd how some things are earlier and some are not. Sarcococca, the so called Christmas box is still tighly in bud with no sign of blooming. 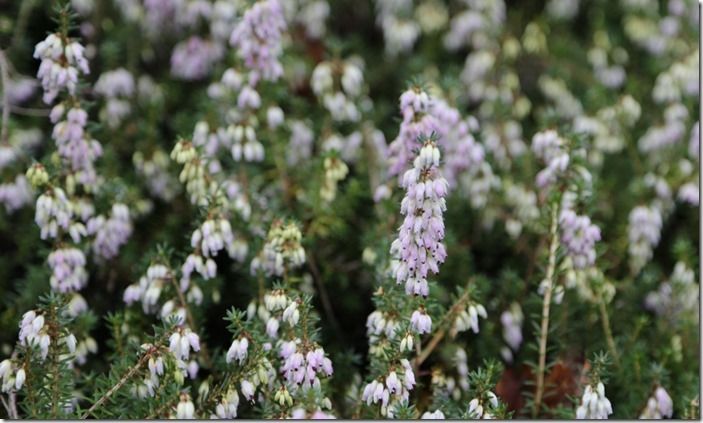 With me the winter flowering heathers are never really showing much colour until early spring. Erica carnea and Erica x darleyensis have a long flowering season anyway, and this year they are already in full bloom. Both make good flowers for cutting, also they are brilliant nectar and pollen plants. A few bumblebees are still on the wing on warm days and they have certainly appreciated the heather flowers. Hopefully there will still be plenty to come to keep them going until more early spring flowers appear. 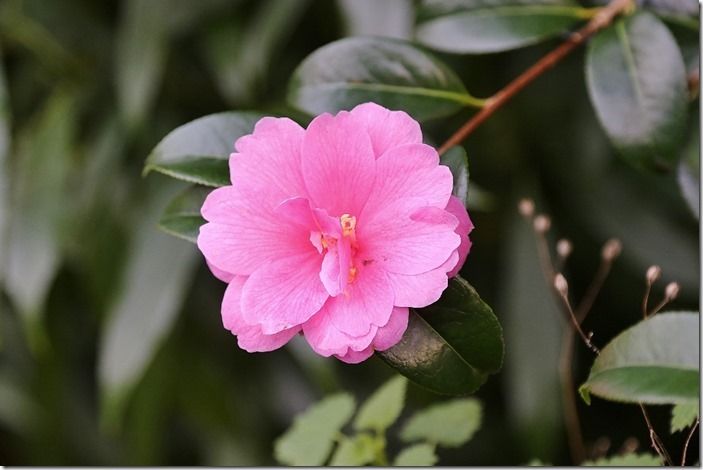 In the mildest areas a few camellias are often in bloom before Christmas, usually Camellia sasanqua. Our garden is too cold for this one but we do have others in a shade part where the ground remains reasonably moist. I would expect flowers to open by March. But there are already a few fragile blooms on Camellia ‘Inspiration’. They lack their usual full form, substance and colour intensity, but the blooms are untouched by frost and more perfect than they often are in their usual season. 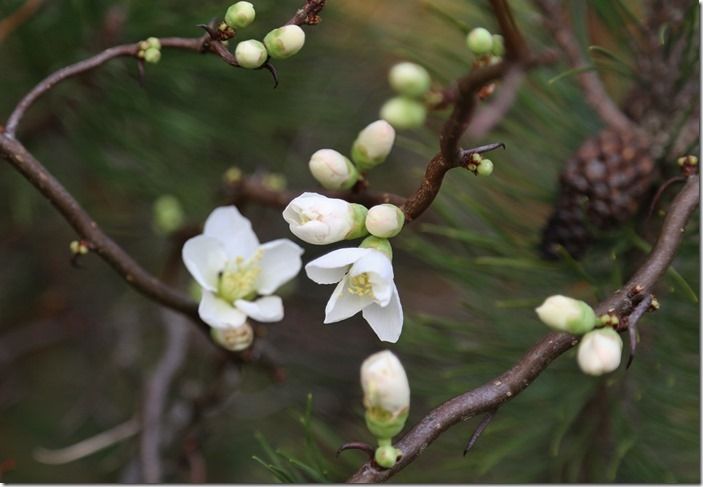 I grow Chaenomeles speciosa ‘Contorta’ as a sprawling, free-standing shrub on the rock bank. I like its twisted branches and Japanese character which work well with a stone lantern and dwarf pine. It is not the most prolific flowerer and normally blooms by early spring. The buds have already swollen and some have opened to white, pink tinged flowers with soft yellow stamens. Again the blooms look rather soft and fragile and as if they would have benefited from some cold weather before they opened. 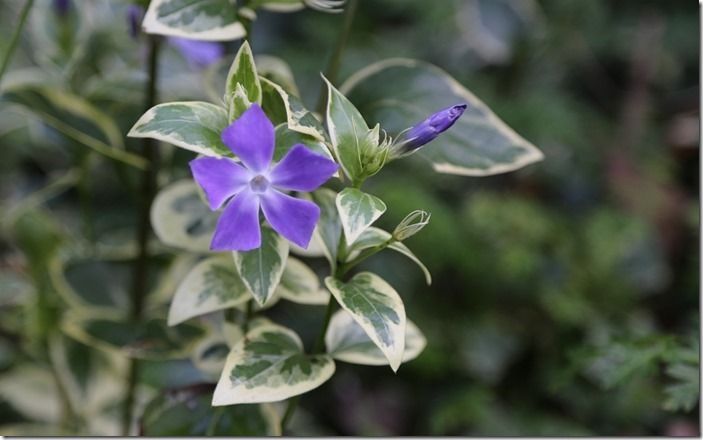 In my experience periwinkles can produce random flowers at any time of the year. Vinca major ‘Variegata’ is an untidy plant and I would only allow it into the shady, unkempt areas of a large garden. That’s probably rather unkind because the large blue flowers are lovely against the cream and green foliage. They are all the more welcome when they look as good as they do at the moment. This is another of those plants that grows too easily. If it was more difficult I would probably treasure it. 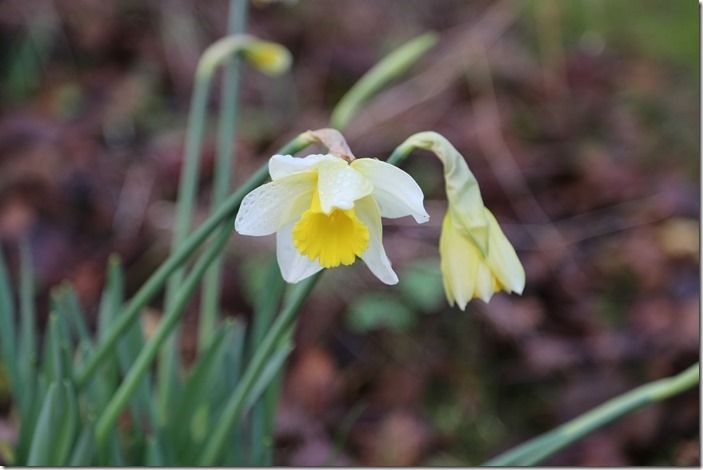 The appearance of the first daffodils always heralds the arrival of spring. The newspapers have been full of stories of extraordinarily early daffodil crops in Cornwall. In colder areas I never understand why a few bulbs decide it’s time to grow and bloom way before the season. That’s certainly what has happened this year and I was surprised to find a few in bloom under the apple trees. Oddly they are not the ones that are usually first to flower, they remain firmly below ground. 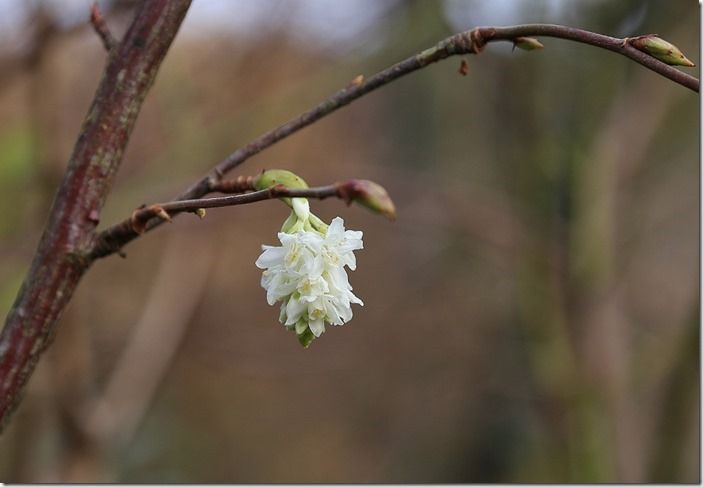 Now come the real surprises: A few flowers are open on the bare stems of Ribes ‘White Icicle’, the flowering currant. These are a good three months early. No sign of any breaking leaves, just small, pendent clusters of white flowers. It will be interesting to see what happens to these if the cold weather eventually arrives. 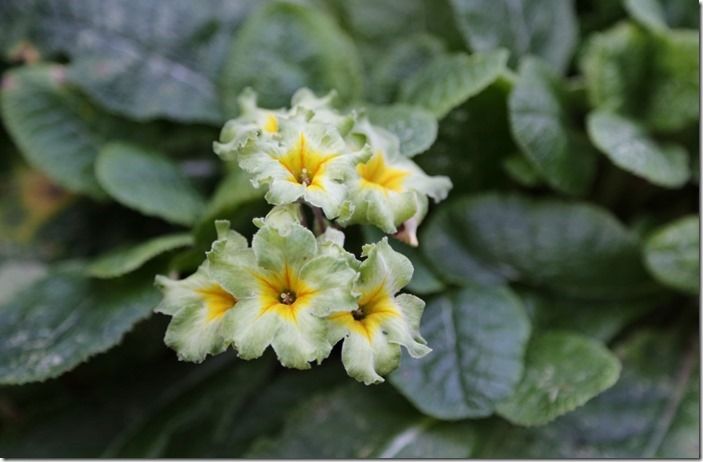 Primula ‘Francisca’, the wonderful green primula I associate with late spring, that continues to bloom through garden visits here in early summer, is in flower. Not just one or two shy flowers, but several impressive heads. This is one of the longest blooming primulas I know, but this year it will have to go some to stay the course. 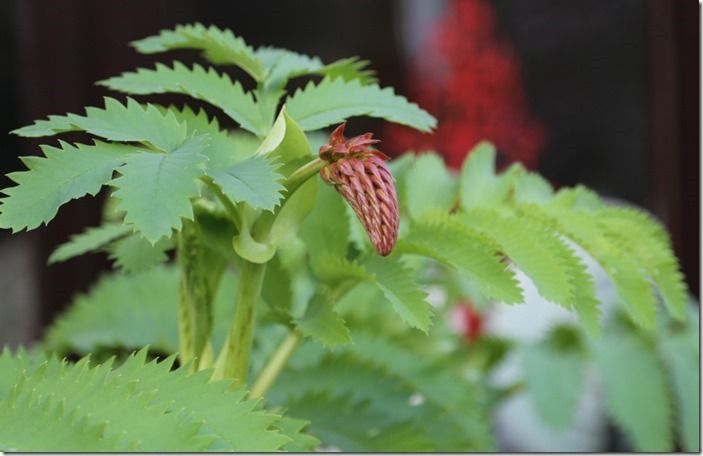 Finally Melianthus major, the wonderfully architectural, slightly tender shrub, which often dies down in winter here not is not only thriving, it has decided to produce flower buds. On top of the stems of exotic blue-green leaves there are pointed cluster of rather bird-like flowerbuds. If this was in a tropical bedding display in midsummer I wouldn’t be surprised, but on Christmas Day?

Anyway we would love to hear what you’ve got in flower in your garden on Christmas Day wherever in the world you garden. Have a wonderful Christmas and very Happy Gardening in 2016 from all of us at MyGardenSchool.