My discovery apple tree is about 10 years old and has produced a good crop of apples each year, but it seems to be dying. Two years ago the leaves on one of its branches all withered and died prematurely and the crop of apples on that branch were much smaller in size than those on the rest of the tree. Last year the condition spread to nearby branches and this year it has spread even more affecting nearly half the tree. I would like to send some photos but this form has no means to attach them like an email so could you let me have a normal email address?

I have just cut off the first affected branch to see if anything was wrong inside but the cut end looked OK. The condition only becomes apparent in the summer. The springtime development of the affected branches seems to be normal but during July the leaves wither up and the apples stop swelling and then fall far to early. I live in the Eden Valley of Cumbria and although we were short of rain during July I was able to keep the apple trees well watered and none of our other apple trees are suffering like this.

I'm wondering whether to cut off all the affected branches, but it would leave the tree very lopsided. Would it help, though, to stop the disease spreading? 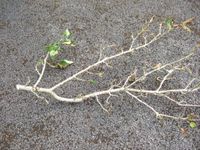 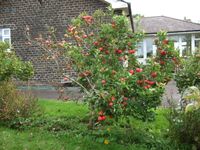 Gv
Gery van Ingen2 years ago
Hm from the photo it isn't an obvious one. Are there multiple apples grated onto your tree? If it is the one branch only that might be it. There are no lumps or bumps visible on the branch or splits so it seems not to be tree canker. No visible fungi either. Now it is time to be cutting back snip a bit off and see what the interior of the branch is like. If it has brown rings cut the entire branch off. That tends to be a fungal disease you cannot stop but by removing thoroughly. Stem or branch die back in general is not a good sign but trees can survive it depends on what you have. Maybe this link gives you better answers than I can give. https://homeguides.sfgate.com/fruit-tree-diseases-branches-die-56057.html Cheers.
Gv
Gery van Ingen2 years ago
grated read grafted sorry
PC
Philippa Coulthard2 years ago
As Gery says it's not obvious, is it. My initial thought was have you seen lots of aphids or other bugs on that side of the tree? Then had the wind damaged the branch low down reducing the nutrient uptake. However if you're getting apples of any sort then I'll go back to the bugs attacking leaves, reducing nutrient available. You could try putting a grease band around the tree to see what bugs you've got come about February, since we've missed the autumn application. Sadly of course it could be something in the soil that the roots only found a couple of years back.

Register to answer this question