Understanding the relationship between Aperture, Shutter Speed and ISO 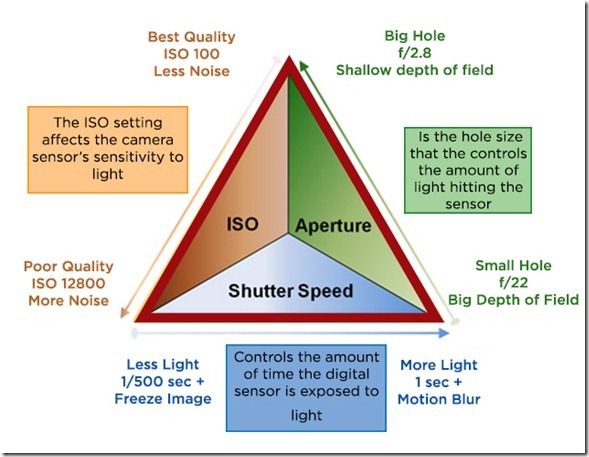 When you’re starting out in photography it’s always tempting to keep the camera on its fully automatic program, so that you don’t need to worry about exposure, focus, or anything else except composing the picture.

Exposure in particular can seem quite daunting at first.  But once you’ve understood the basics, it’s actually very straightforward, and this frees you up to use one of the semi-automatic exposure modes, giving you much more control over the resulting image.  These semi-automatic modes are known as aperture priority (AV) and shutter priority (TV).

Each incremental change in shutter speed or aperture is known as a stop.  So if you have a shutter speed of half a second, a one-stop change in either direction would give you a quarter of a second, or a full second.  Apertures are described by f-numbers, and there is one stop difference between each f number.

Most of the time, this is all you need to think about.  But there is one more factor in the exposure equation, and this is the ISO.

The ISO setting affects the camera sensor’s sensitivity to light.  Each doubling in the ISO setting (e.g. from 100, to 200, to 400 ISO) will also change the exposure by one stop.


Imagine that you’re photographing a landscape with flowers in the foreground, trees in the middle distance, and mountains further away.  You’ve decided to shoot in aperture priority mode, and you want to use a very small aperture, let’s say f22, to get a large depth of field.  You check what shutter speed your camera is suggesting, and see that it’s ¼ second.

This is quite slow, and even though your camera is on a tripod, as it’s a windy day there’s a chance that the flowers and trees will move and blur in the photograph.  You don’t want to change your aperture – so what can you do?  The answer is to change your ISO to a higher setting.  Each one stop change of the ISO will bring about a one stop change in your shutter speed – so as you increase the ISO setting, the shutter speed will get shorter, while your aperture of f22 remains the same.

However, bear in mind that the image quality will always be better at a lower ISO setting (see my blog about this on May 21st)

This relationship between aperture, shutter speed, and ISO is often known as the Exposure Triangle.

If you would like top learn more about Exposure why not sign up for Nigel Hicks’s excellent 4 week online course on Light & Exposure.