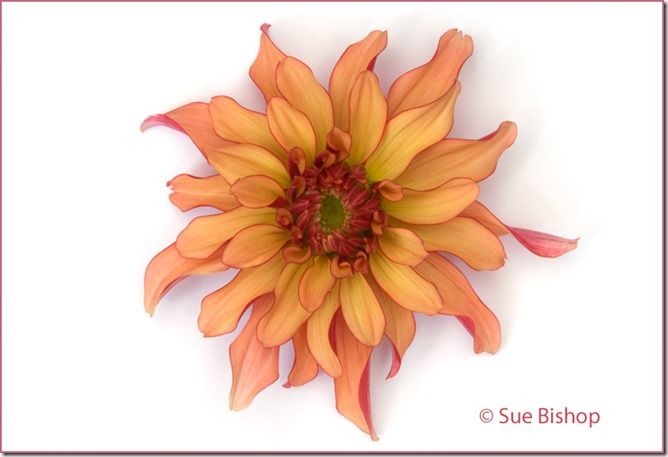 I love photographing flowers, and I usually prefer taking photos outdoors, with the flowers in a natural environment. The reason I like that so much is that you can create lovely out of focus backgrounds using the other flowers and foliage behind your subject flower.

Even when I photograph a flower indoors, in my conservatory, I will usually try to create a natural looking backdrop by positioning other pots of plants behind the flower I’m photographing. This isn’t always easy, as my conservatory is quite small and there’s not a lot of room for manoeuvre!

But when I went into my local florist one day and noticed a small dahlia plant in a pot, a vision of one of the flowers photographed against a clean white backdrop immediately sprang into my mind.

So I bought the dahlia and took it into the conservatory. I knew that to create the picture I’d envisioned I would have to snip one of the flowers off the plant, so I spent a while first trying to photograph it without cutting it off, using a more natural backdrop.

But in the end, I gave in and went for my original idea! I put a piece of white card on the floor, snipped off the flower, and put it on the card. I then positioned my tripod above the flower with the camera looking directly down onto it.

In this case I didn’t have to worry about throwing distracting details in the background out of focus, as there weren’t any! So I used a small aperture of f32 to make sure I had sharpness throughout the depth of the dahlia.

This small aperture meant I needed a shutter speed of ½ sec, so as a precaution against camera shake I used a cable release, and also the camera’s mirror lock up mode.

For this type of photograph, it’s better to use either centre-weighted metering or spot metering, so that the exposure of the flower won’t be affected by the large area of white in the image.

Once I’d downloaded the pic to my computer, I opened it in Photoshop Elements. I was happy with the colour in the flower, but the white backdrop looked rather grey. Adjusting levels for the whole image would have lightened the flower as well as the backdrop, so I selected the background using the magic wand tool, and then used levels to bring it back to white.

Finally I added a border, using the colour picker to choose a colour from the flower itself.

And although I’m generally a fan of natural backgrounds, I did feel that the white backdrop here showed off the beautiful shape and colour of the flower to its best advantage!