How to use a polarising filter. 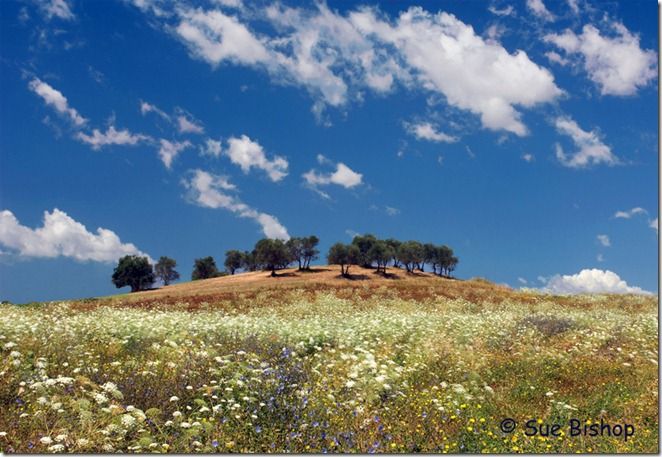 Many of the filters that photographers used to have in film days are now redundant, as they were mostly used to adjust the colour temperature of a scene, which is now done via the white balance menu instead.  But one filter that we do still use with digital cameras is the polariser, which is generally used to strengthen and saturate the colours in a scene, and remove white light reflection.  It’s probably best known for deepening the blue of a sky, which can look especially dramatic when there are white clouds to contrast with the blue; but it will saturate the colours in a scene generally, and foliage in particular can often look more vibrant and intense when polarised.

A polarising filter screws onto the front of your lens and has a ring which you turn to adjust the amount of polarisation.  If you look through the viewfinder while you rotate the ring, you will see the effect changing – you might want to have just a tweak of polarisation, or you might want as much as possible.  The polariser works best on sunny days – it will have very little effect in overcast weather.  It has its strongest effect when the sun is coming from your side – if the sun is directly behind or in front of you, the effect will be barely noticeable.

Do be aware that the polariser will affect your exposure, and may increase it by up to two stops - in other words, if you keep the same aperture, you would need a longer shutter speed to achieve the right exposure.  The camera’s TTL meter will automatically sort this out for you, but you do need to bear it in mind if you’re handholding the camera and might be in danger of camera shake.

A few other words of caution:  with a wide angle lens, a polariser may cause uneven polarisation across the sky – in other words, the blue will be more intense in one part of your sky than in another.  Also, with very wide angle lenses, the thickness of a polarizing filter might cause vignetting, i.e. dark patches at the corners of your photo.

That said, the polariser is a wonderful accessory, particularly for landscape photography, and can make the colours in a photograph sing in a way that really brings it to life.  Definitely something to keep in the gadget bag!