You see much written about aperture, but less so, about its close relation shutter speed. Shutter speed is just the other side of the coin. The Yin to apertures Yang!

While we usually associate aperture with depth of field, shutter speed tends to be more closely linked with time and movement.

The longer the shutter remains open, the more time the camera is able to record.

At 1/2000th sec. you can freeze a humming birds wing, at ¼ sec. you can blur flowers in the wind, while using a 2 minute exposure, you can change waves on the sea, to a soft fog.

With any picture taking situation, you have at least 5 combinations of aperture and shutter speed that will result in a correctly exposed photo.  Which one you prefer, is down to personal choice and how much creative motion blur you like.

A correct exposure, is simply a balance of between shutter speed and aperture. Once the photographer understand the implications of this unison, they are 90% there in mastering their camera.

Depending on your lens, each picture taking opportunity offers at least 5 shutter speed/aperture combinations (possibly more with a more expensive lens) The only difference being the amount of motion blur captured in each image 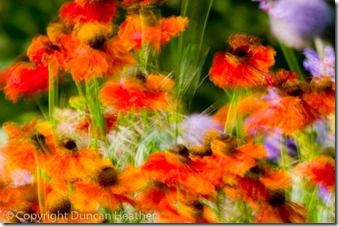 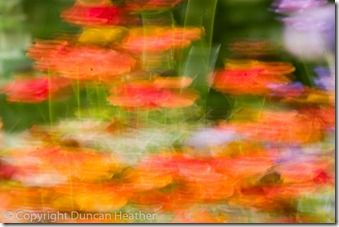 In these images of Hellenium flowers (above) photographed on a windy day, the first image on the left was take at f/8 at 1/60th sec. using a 70-200mm lens with an ISO of 100 The second image on the right was taken at f/16 at 1/15th.  However it was only when I set my shutter speed to 1 second at f/32 did i get the image i wanted (see large image at the top of the page)