Colour is a very important element in photography for me, and in fact usually the first thing that attracts me to photograph something will be its colour.  It doesn’t necessarily have to be a bright or saturated colour, and in fact I often prefer more subtle, pastel shades. 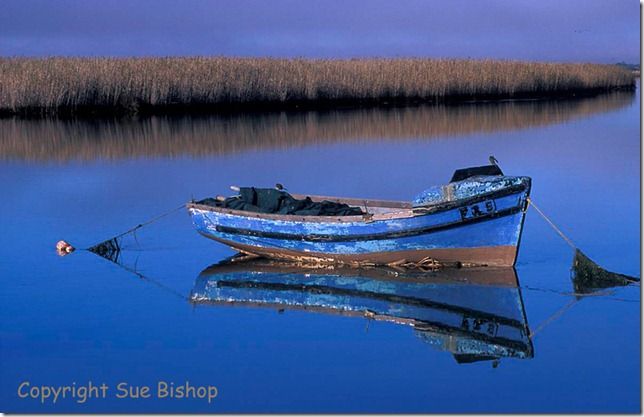 Different colours work in different ways in an image, and also have different emotional associations.  Take blue, for instance.  Apparently in surveys blue comes out top as most people’s favourite colour.  But the word blue encompasses a very wide spectrum of colours – navy, sapphire, indigo, cornflower, sky, azure, aquamarine.  In fact, I’ve just consulted my Roget’s thesaurus, and they list no fewer than 80 different shades of blue!

Blue is on the cool side of the colour wheel, which means that it is a receding colour – it doesn’t dominate or leap out from a photograph like red does.  It’s often thought of as a calm, peaceful, restful colour.  In this photograph of an old blue rowing boat, I think the blue colour does contribute to the tranquil feel of the image.  The fact that there are only really two colours in the photograph, blue and brown, also adds to the restful feel, as does the symmetry of the mirror-like reflection. 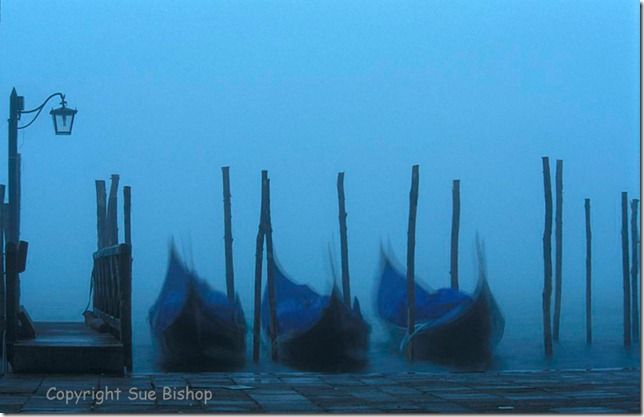 It’s interesting to compare this effect with the photo of gondolas, where the predominant colour is also blue.  It was a foggy morning, and I put the camera on a tripod and used a long shutter speed to allow some movement blur in the gondolas.  In this case the blue cast is caused by the cold light, and this time the blue in the image has a rather different effect – instead of being tranquil and calm, it has a rather cold feel.

Of course, it would be easy to remove the cold cast in Photoshop by adding some red to the image, but in this case I didn’t want to, as I rather liked the cold and slightly spooky effect!

Blue is definitely one of my favourite colours, whether it’s in flowers or in landscapes or in a lovely pair of distressed painted shutters somewhere in France!