Next time you’re in the countryside at night do yourself a favour: look up. If it’s clear and conditions are right you’ll see a seemingly infinite number of stars twinkling like diamonds on a sheet of black velvet. As a visual pleasure it’s hard to beat, made more special by the fact that the light you’re seeing is years, centuries even aeons old.

Given that fact it seems churlish not to use starlight to make images with. However, you immediately hit a snag. The light from the stars isn’t that bright. In order to make an image you need to either use a high ISO or a long shutter speed. If you choose the latter you hit another snag: the earth rotates. Use a suitably long shutter speed and the stars will form a curved line across the image. However, the effect is rather interesting and is now a popular method of producing aesthetically pleasing astronomical images (as scientific records they’re less useful, but who says every photo has to be scientifically accurate?). 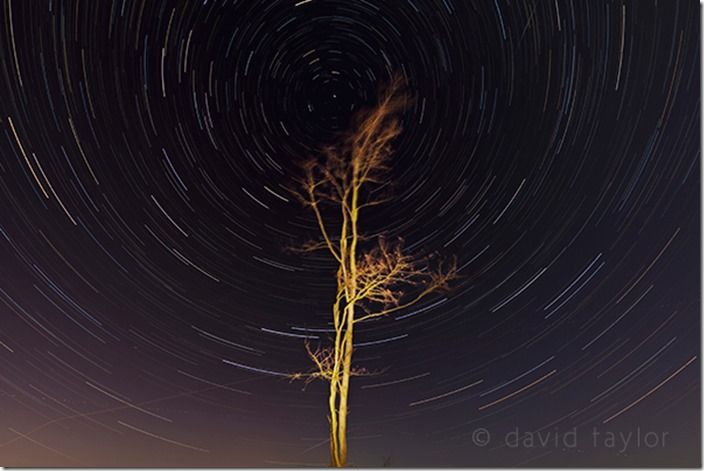 In the northern hemisphere the star appear to rotate around Polaris. The further north you are, the higher Polaris will appear in the sky (1 hour exposure)

If you’re in the northern hemisphere the stars will appear to rotate around Polaris (also known as the Pole Star). Polaris is on the northern celestial pole (an imaginary line projected up from the North Pole). It’s not a particularly bright or exciting star and it’s just a cosmic coincidence that it’s situated where it is. If the night was twenty-four hours long you’d see the other stars rotate around Polaris in a complete circle back to their starting point. Unfortunately, there is no star equivalent to Polaris in the southern hemisphere. Sigma Octantis is the closest, but it’s hard to see. The principle that the night sky appears to rotate around a point in the sky still holds true though. 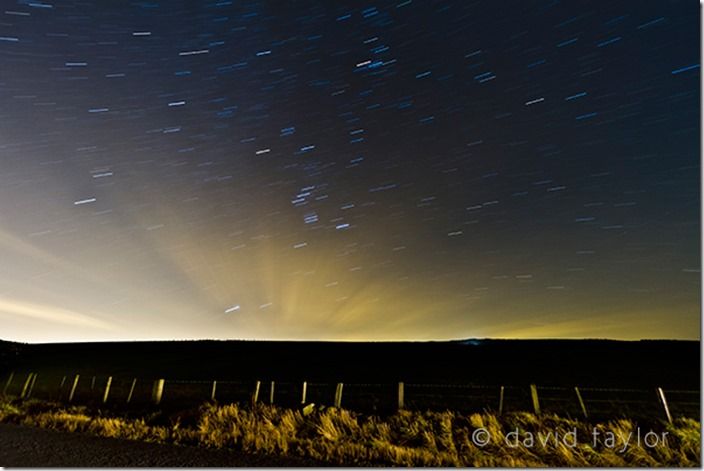 There are a few practical points to consider when shooting star trails. The first point is battery power. Digital cameras are very power dependant. Keeping the shutter open and the sensor active will eventually deplete a battery. Therefore you need to use a fully charged battery. Some digital cameras perform noise reduction on exposures of a second or more. This should be turned off. It works by making a second exposure of the same length as the first, essentially doubling your exposure time. When shooting star trail images I apply noise reduction in postproduction rather than in-camera.

It’s a good idea to choose a moonless night and in a location with little or no light pollution. Your camera should be on a stable tripod. You’ll also need a remote-release that allows you to lock the shutter open. Set your camera to Bulb mode and use an aperture of f/2.8 (ISO 100) or f/4 (ISO 200). Focus the lens on infinity (∞), switching to manual focus if the camera has trouble focusing.

Hopefully you’ll be successful. If nothing else shooting star trails is a wonderful way to get to learn about the night sky. The stars will quickly seem like old friends. In fact, the oldest friends you’ll ever get to know. 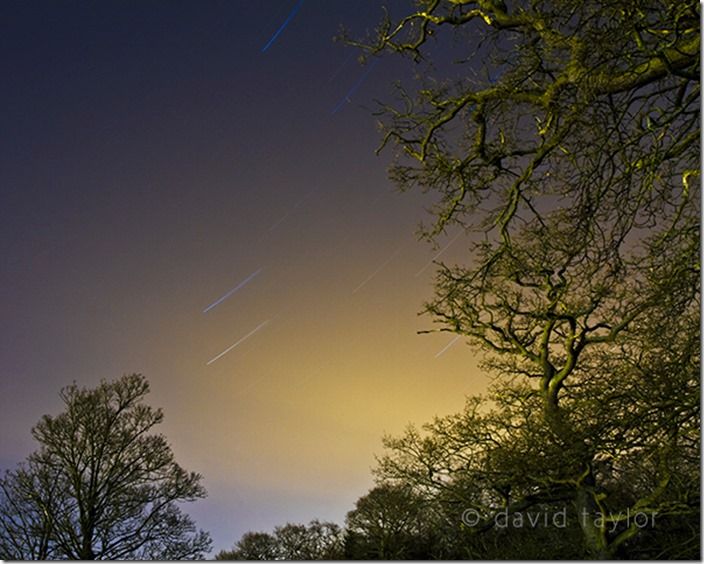 Shooting star trails close to urban lighting will colour casts, particularly if there’s even a hint of cloud.