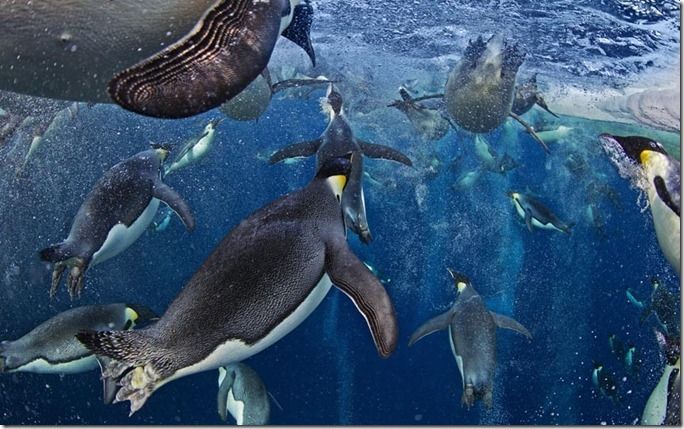 The winners of the Veolia Environmental Wildlife Photographer of the Year 2012 have been announced. The coveted title of Veolia Environmental Wildlife Photographer of the Year was awarded to Paul Nicklen from Canada for his image of emperor penguins on a frozen area of the Ross Sea, Antarctica. An exhibition of winning photos opens at the Natural History Museum in London on Friday 19 October, featuring 100 images. We publish ten of the winning images here - see more at www.nhm.ac.uk/wildphoto

This was the image Paul had been so hoping to get: a sunlit mass of emperor penguins charging upwards, leaving in their wake a crisscross of bubble trails. The location was near the emperor colony at the edge of the frozen area of the Ross Sea, Antarctica. It was into the only likely exit hole that he lowered himself. He then had to wait for the return of the penguins, crops full of icefish for their chicks. Paul locked his legs under the lip of the ice so he could remain motionless, breathing through a snorkel so as not to spook the penguins when they arrived. Then it came: a blast of birds from the depths. They were so fast that, with frozen fingers, framing and focus had to be instinctive. "It was a fantastic sight", says Paul, "as hundreds launched themselves out of the water and onto the ice above me - a moment that I felt incredibly fortunate to witness and one I'll never forget." 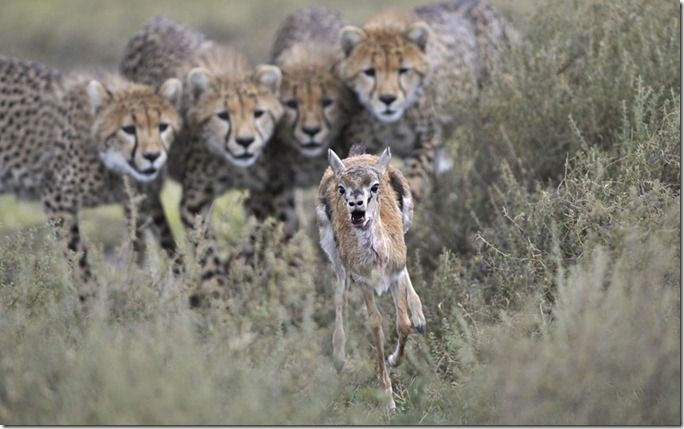 Winner: Gregoire Bouguereau from France, Practice run.When a female cheetah caught but didn't kill a Thomson's gazelle calf and waited for her cubs to join her, Gregoire guessed what was about to happen. He'd spent nearly a decade studying and photographing cheetahs in the Serengeti National Park, Tanzania, and he knew that the female's behaviour meant one thing: a hunting lesson was due to begin. The female moved away, leaving the calf lying on the ground near her cubs. At first, the cubs took no notice of it. But when it struggled jerkily to its feet the cubs' natural predatory instincts were triggered, says Gregoire. Each cub's gaze locked on to the calf as it made a break for freedom. The lesson repeated itself several times, with the cubs ignoring the calf when it was on the ground and catching it whenever it tried to escape, an exercise that affords the cubs the chance to practise chases in preparation for the time they'll have to do so for real.Picture: Gregoire Bouguereau 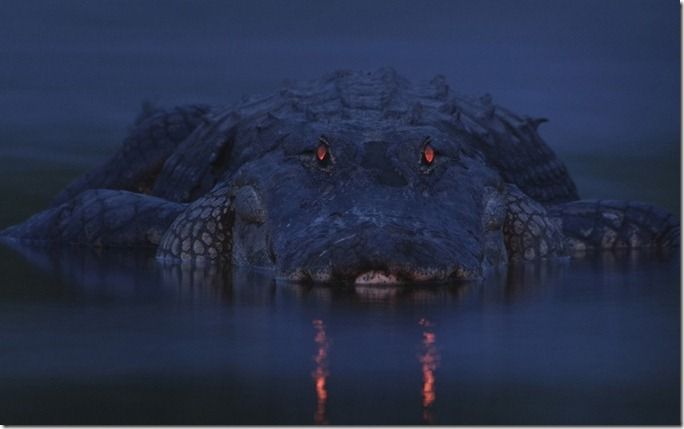 Winner: Larry Lynch from the USA, Warning night light.One evening, while walking along the riverbed of the Myakka River State Park in Sarasota, Florida, USA, Larry came across a group of alligators. It was the dry season, and they had been gorging on fish trapped in the pools left behind as the water receded from the river. One big alligator had clearly eaten its fill. It wasn't going anywhere in a hurry, says Larry. So I set my tripod and camera up about seven metres in front of him and focused on his eyes. Just after sunset, Larry set his flash on the lowest setting to give just a tiny bit of light, enough to catch the eyeshine in the alligators eyes. Like cats, an alligator has a tapetum lucidum at the back of each eye - a structure that reflects light back into the photoreceptor cells to make the most of low light. The colour of eyeshine differs from species to species. In alligators, it glows red - one good way to locate alligators on a dark night. The greater the distance between its eyes, the longer the reptile, in this case, very long.Picture: Larry Lynch 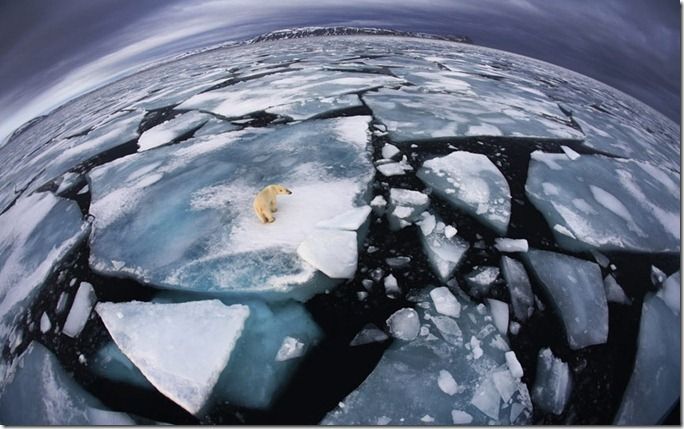 Winner: Anna Henly from the UK, Ice matters.Anna was on a boat in Svalbard (an archipelago midway between mainland Norway and the North Pole) when she saw this polar bear at around four in the morning. It was October, and the bear was walking on broken-up ice floes, seemingly tentatively, not quite sure where to trust its weight. She used her fisheye lens to make the enormous animal appear diminutive and create an impression of the top predator on top of the planet, with its ice world breaking up. The symbolism, of course, is that polar bears rely almost entirely on the marine sea ice environment for their survival, and year by year, increasing temperatures are reducing the amount of ice cover and the amount of time available for the bears to hunt marine mammals. Scientists maintain that the melting of the ice will soon become a major problem for humans as well as polar bears, not just because of rising sea levels but also because increasing sea temperatures are affecting the weather, sea currents and fish stocks.Picture: Anna Henly 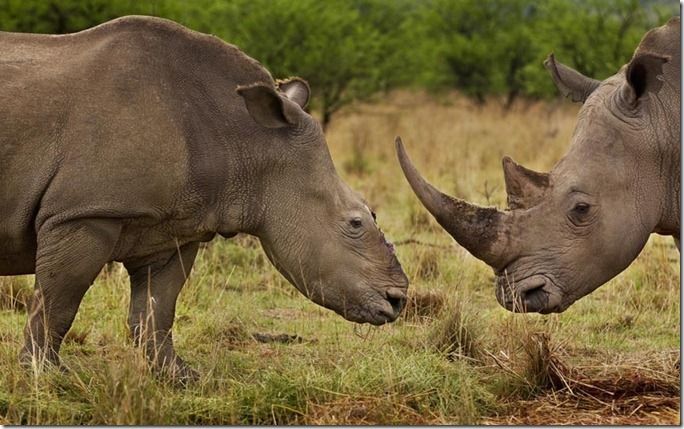 Runner-up: Brent Stirton from South Africa, The real cost.This female southern white rhino is inseparable from her new male companion (right). It's a miracle she is alive. Four months earlier, in Tugela Private Game Reserve, KwaZulu-Natal, South Africa, she was brutally attacked by poachers. The men surveyed the area by helicopter, mapped out the movements of the rhino and the guards, darted her and then, using a chainsaw, cut off her horn, including a large section of bone. They left her to die, but she was found wandering the following day in unimaginable pain. Her four-week-old calf, which had become separated, died of dehydration and starvation.Picture: Brent Stirton 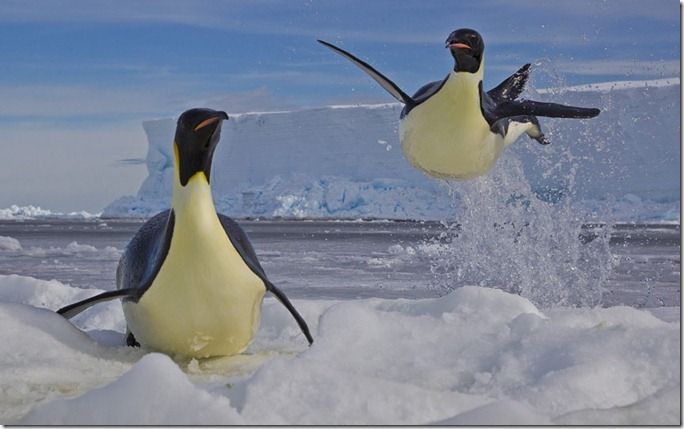 Winner: Paul Nicklen, Frozen moment.Paul was not the only mammal lying patiently in wait on the edge of the Ross Sea, Antarctica, to greet the explosion of emperor penguins. Leopard seals - measuring up to three and a half metres long - were almost certainly lurking at the edge of the ice ready to grab a meal. The penguins were therefore exiting as fast as possible. They can sky-rocket up to two metres high out of the water, landing well clear of the edge. I also kept an eye out for leopard seals myself, says Paul. I'd previously had one hit me square in the face when I was five metres from the ice edge, knocking me down and stunning me. Luckily it realised that I wasn't a penguin and slipped back into the icy water. The penguins' survival is vital to that of their two-month-old chicks, hungrily waiting some 10 kilometres away at the Cape Washington colony. With full bellies, the penguins toboggan to the colony, where they regurgitate the food to their respective single chicks. They then head back to the Ross Sea for another three-week stint at sea.Picture: Paul Nicklen 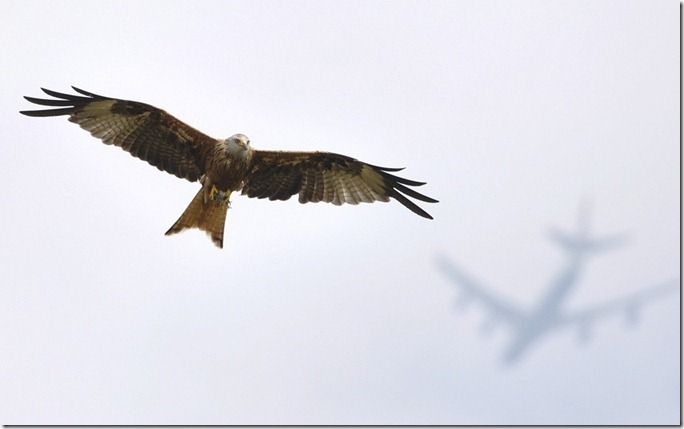 Winner: Owen Hearn from the UK, Flight paths.Harvest time at Owen's grandparents' farm draws in the birds of prey to feed on the fleeing small mammals, and it also attracts Owen, with his camera at the ready. Seeing this red kite with an aeroplane in the distance was a moment I couldn't miss, says Owen. The shot is symbolic for him for two reasons. It was taken at the centre of the Bedfordshire site chosen for London's third airport back in the late 1960s. Opposition to the planned airport stopped it going ahead, which is why I can photograph the wildlife on the farm today. At the same time, British red kites also faced extinction following centuries of persecution. But following reintroductions, numbers have increased dramatically, spreading east from the Chilterns.Picture: Owen Hearn 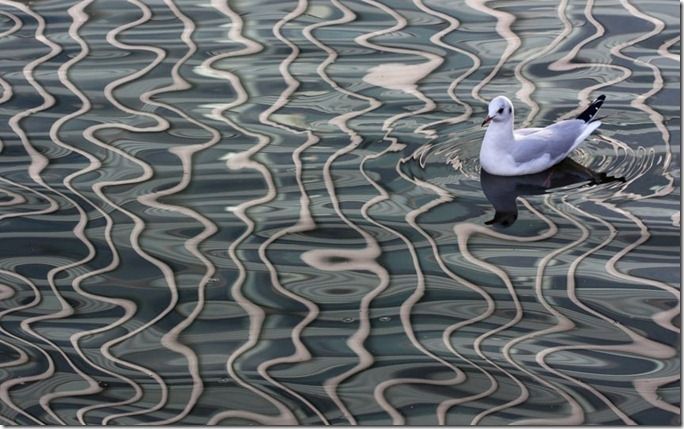 Winner: Eve Tucker, City gull.Some of the tallest buildings in London surround the docklands at the heart of the business and financial district of Canary Wharf. As Eve walked along the wharf, a bird caught her eye. It was a black-headed gull, of which there are many in the city. But this one was resting on a very remarkable area of water. Eve realised that she was looking at reflections of the straight lines of the nearby office block, distorted into moving swirls. The effect was so unusual - it gave a beautiful setting for an urban wildlife image. Like all true photographers, Eve had noticed what others most often fail to see, even when it's right in front of them.Picture: Eve Tucker

Winner: Thilo Bubek from Germany, Aurora over ice.Thilo packed a flask of hot tea and a sleeping bag and reindeer skin for his friend to sit on and set off for Kval ya Island, some 30 kilometres from the city of Troms in northern Norway, to watch for auroras. It was February, and the temperature was -17C. The moon shone high in the sky and illuminated the landscape all around as Thilo walked out onto the frozen lake at Kattfordeide, and set up his tripod. At first, he saw only tiny auroras in the distance. But as the evening wore on, the dancing lights moved closer, until eventually they flashed in vast, dramatic luminous arcs across the sky. Auroras move fast, and so I chose a fairly high ISO to capture six images quickly and create a panorama, says Thilo. The aurora borealis (or northern lights) phenomenon occurs when highly charged electrons from the solar wind interact with oxygen and nitrogen in the atmosphere, miles above the surface of the Earth. The colour varies depending on the nature of the atom (green is oxygen) and the altitude at which the reaction happens.Picture: Thilo Bubek 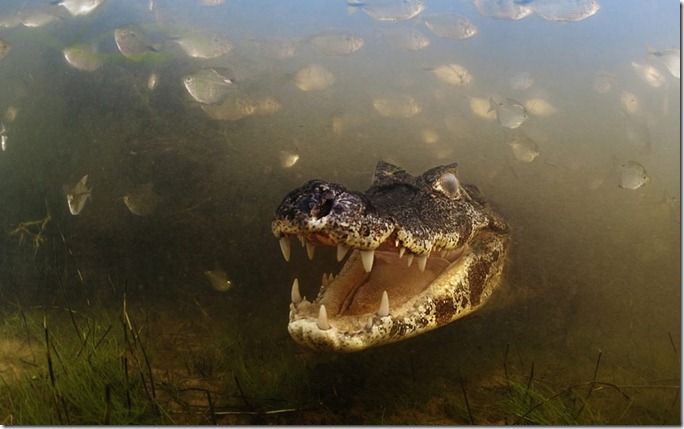 Winner: Luciano Candisani from Brazil, Into the mouth of the caiman.Motionless but alert, a yacare caiman waits, like a small tyrannosaurus for fish to come within snapping reach, says Luciano. Caimans are usually seen floating passively on the surface. Under the water, it's another story. It's this secret life that has fascinated Luciano ever since he first came face to face with a caiman while snorkelling. Once he'd recovered from the shock, he realised that the reptile was neither aggressive nor fearful - and that he could approach it. Luciano now regularly documents the underwater life of caimans in the shallow, murky waters of Brazil's Pantanal (the biggest wetland in the world), which contains the largest single crocodilian population on Earth. Caimans can grow to be three metres in length. Most aren't aggressive, but some individuals can be. The safest way to get close is when they are concentrating on a shoal of fish, says Luciano. While I was concentrating on this caiman emerging from the gloom, I had a field biologist with me all the time. The result was the picture that's been in my imagination since my father first showed me a caiman 25 years ago.Picture: Luciano Candisani