Love them or loathe them, grasses have become essential subjects in today’s planting palette, mainly because they mix well with perennials in prairie style schemes, adding light height and movement, especially later in the year.

I have resisted writing about grasses to grow with perennials, maybe that’s a subject for another time. Instead I’ve chosen my top ten grasses that I reckon fit into any garden. Over the past few years I have come across many planting schemes which are grass-heavy.

Designers love them and plant them in great drifts, most have clearly never divided a miscanthus after a couple of years. My garden falls into the category of ‘a few grasses here and there’. I use “grasses” to include sedges which may not be true grasses botanically, but they are in garden terms. 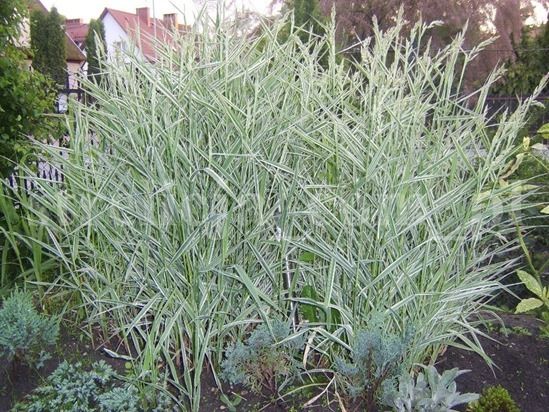 My first choice is the grass I knew as a kid as gardener’s garters. It does have creeping underground rhizomes, so runs around in beds and borders.However its bright white and green striped foliage is a lively addition in sun or shade. It does not get too tall and is best among shrubs where it is controllable, if necessary, and where it will not invade clumps of perennials. 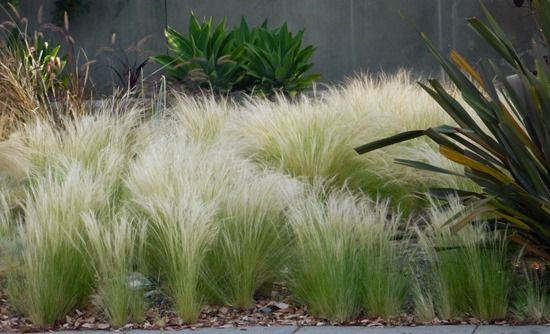 I first came across this wispy, gossamer grass on a trip to France. On light soils it has the ability to seed randomly and is great in scree or gravel gardens. It is the nearest thing you can plant to create an effect of mist or smoke, starting peridot-green and turning gold by fall. Pull out the faded fronds with rubber gloves and don’t be afraid to get rid of old plants and plant new ones. It’s great with bold prairie daisies and firefly-crocosmias. If you have one to hand, grow it in an old chimney pot. 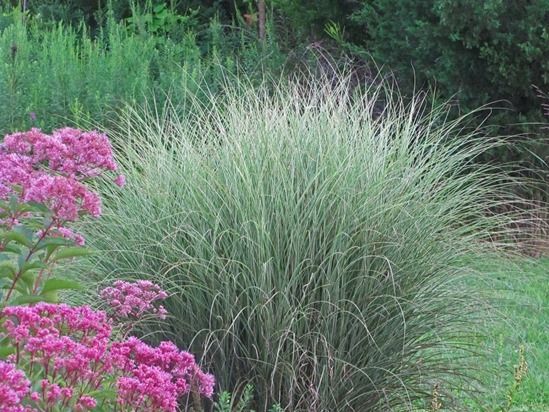 There are loads of varieties of miscanthus, mostly grown for their plume like flowers, at their best in autumn and still beautiful through winter. This one is my favourites for its fountains of fine silver-green foliage. I think it has great presence in a border and suits any garden. The flowers are few and nothing special, but the leaves turn buff and curl and stay in good condition through winter. 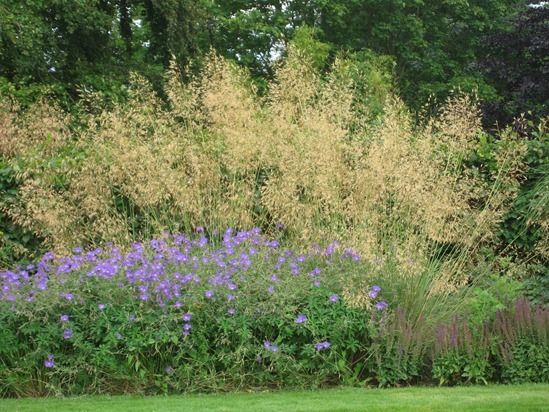 Grow this one for its golden flower heads, at their best in late summer. Plant I where the evening sun will catch it and it will light up the garden. A hummock of untidy fine green leaves is not its greatest asset, clean out the dead ones in winter armed with strong rubber-palmed gloves. Plant on the corner of a bed or in gravel and be prepared to lift and divide every few years. Garden centres hate this plant because it doesn’t look great in a pot. 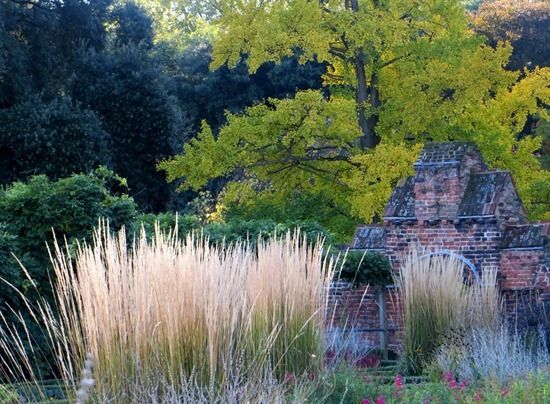 I’ve included one prairie grass because I like it. Very upright reed-like stems and slender flower heads give this grass powerful vertical lines. This is a good one to plant in gravel or with perennials and is a useful contrast to anything that grows as a loose mound. It can be used to lend support to taller perennials in larger schemes 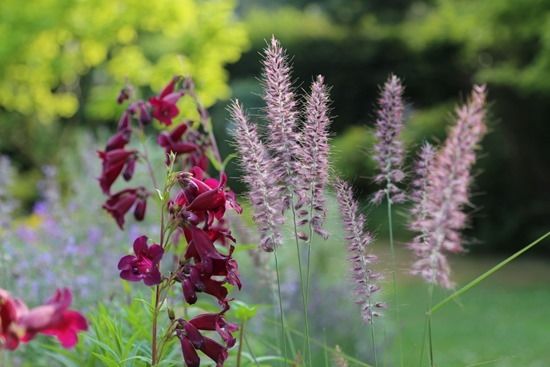 Pennisetums are popular for their fluffy flower heads. The red one which is widely sold, because it has great foliage earlier in the year, as well as striking red plumes, is not hardy. I would grow it, but only as a bedding plant. ‘Karley Rose’ is a new kid on the block with a much more upright habit, green leaves and pink plumes. It has proved pretty hardy with me and I grow it in a pot, as well as in the border with penstemons. 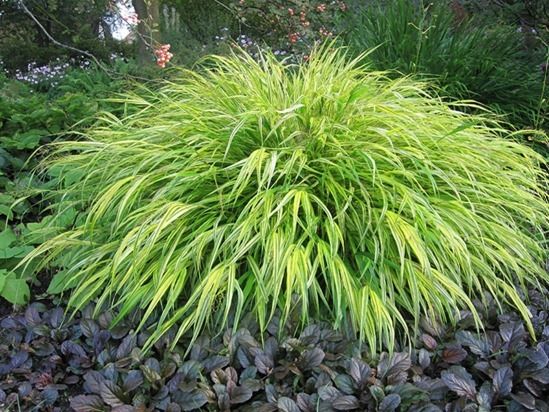 This has to be the most tactile and striking grass when it forms a soft mound of groomed golden leaves in summer. It stays beautiful into winter as the foliage turns to buff. It is good at the front of a border, but for me it is a fantastic subject for a pot where its natural form is elegantly displayed. If I had room for only one grass it would be this one, because it will deliver 10 months of interest. 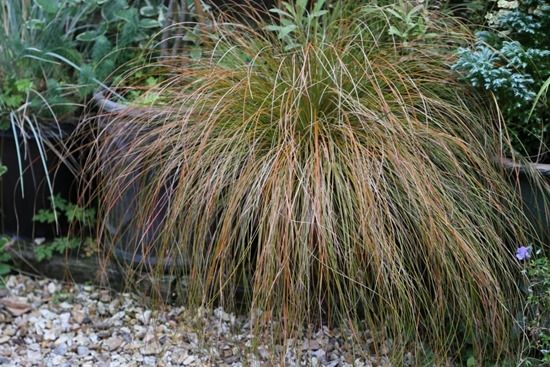 I often use Carex comans Bronze for under planting trees with coppery bark and for pots and containers for winter. It can look rather dead, as people often point out to me. Carex testacea is taller, looser with olive-green leaves tinged copper, becoming orange and vibrant in autumn and winter. It is happy in shade and works well with heucheras and heucherellas. I love it with Euphorbia ‘Ascot Rainbow’. It doesn’t seem to need the regular trim that most carex require. 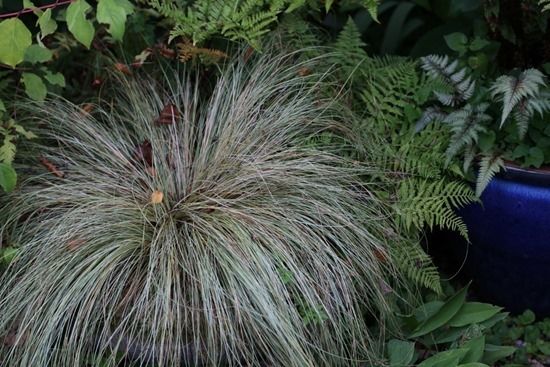 This is one that I would use in shade with ferns. Silver-green with fine leaves forming a clump like a good head of hair. When the leaves get too long and straggly, usually when unimpressive flowers develop near their ends, it’s time for a haircut. This one does seed around in gravel. I don’t imagine the offspring are Frosted Curls but they look so similar it’s not worth differentiating. 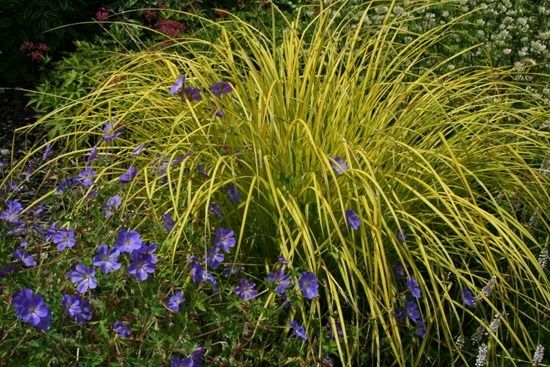 So far I’ve chose the subtle and subdued. This one is one of the brightest characters in the garden with soft foliage of bright golden yellow. It’s at its best early-midsummer and don’t expect the foliage quality to be enduring. However if you can cope with bright yellow introduced in this way it is worth growing. Stunning with blue, or underplanted with black ophiopogon.

So what are your favourites? Do post your suggestions below. 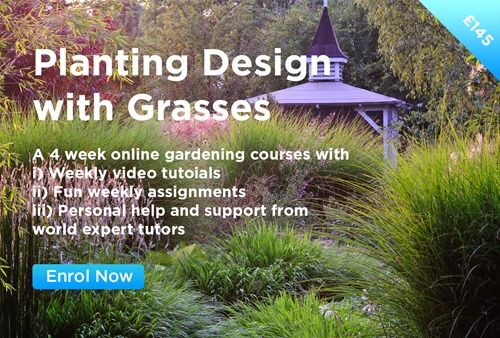