So how’s the season wherever you are? The wet weather and ensuing floods in southern England have made the news the world over. In England it has been officially the wettest winter on record; however it has certainly been one of the mildest in recent years. No snow so far here in the south (always dangerous to say that) and, although there have been frosts we haven’t had any prolonged cold weather. The result is plenty of early flowers and distinct signs of buds breaking on trees and hedgerows. The snowdrops are past their peak in sheltered gardens and early shrubs are blooming alongside some of those we consider as highlights of the winter garden. 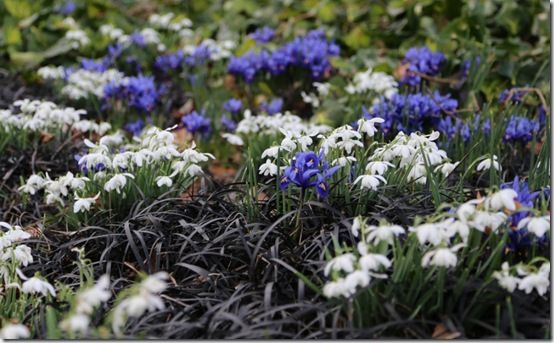 I paid a quick visit to The Savill Garden, Windsor Great Park (near London) this week. As I’ve said on many occasions this part of The Royal Landscape, as it’s known, is one of my favourite gardens for all seasons. It always excels in late winter and early spring with its winter beds of cornus, willows along the water and wonderful drifts of early dwarf bulbs. Drips of snowdrops through black ophiopogon were studded with sapphire Iris reticulata ‘Harmony’. The effect was truly stunning; especially with the addition of the large leaves of Hedera colchica ‘Gold Heart’ used for ground cover. Dwarf iris can be rather pathetic when grown in bare soil, but planted in numbers growing through the foliage of a striking planting partner their jewel-like quality is shown at its best. 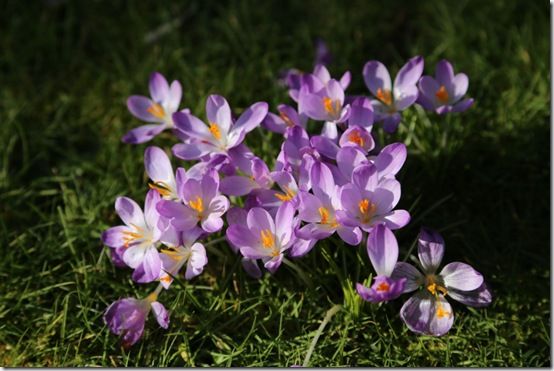 I always fine that Crocus tommasinianus is every bit as early as the common snowdrop, Galanthus nivalis. Both are good early sources of nectar and pollen, but in my garden the crocus is the bumble bee’s favourite. For such a fragile flower it is remarkably resilient and is still smiling despite a battering by wind and rain. 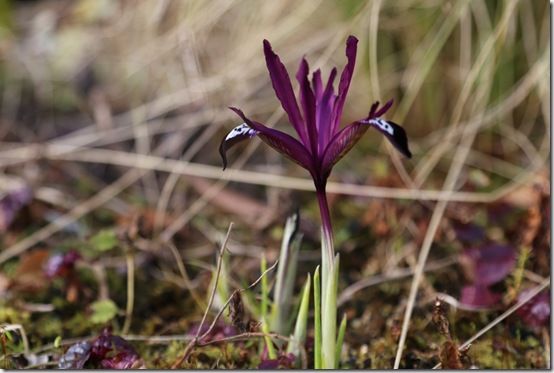 Having said that dwarf iris can be rather pathetic in the garden I do love having a few tucked into pots where I can see them and enjoy them. I have a number of the dark velvety Iris ‘J.S Dijt’ growing among grasses and hedera in a large shallow bowl at the front of the house. Here they are protected from slugs and soil splash and seem to come back year after year despite total neglect. 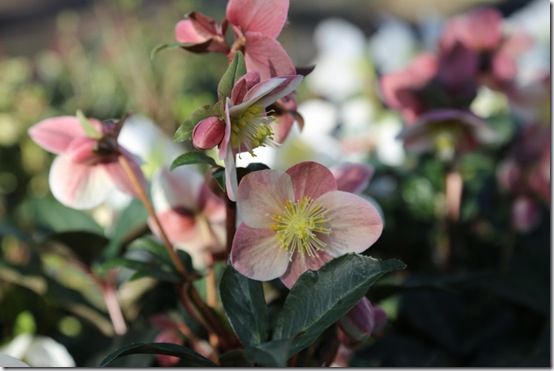 I am particularly impressed with some of the new varieties of Helleborus x ericsmithii that are appearing. These have good evergreen foliage and beautifully carried flowers which display subtle colouring and spectacular stamens. They may not possess the soft, nodding quality of the Lenten roses but at least you can see inside the flowers because they do not hang their heads. 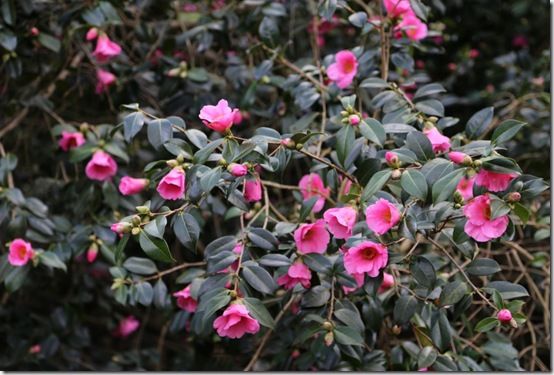 In the Savill Garden the earlier flowering camellias are already in full bloom. Varieties of the delicate Camellia sasanqua have undoubtedly been flowering for weeks but now, as spring approaches the massive specimens of Camellia x williamsii are loaded with flowers. I think this one is probably the variety ‘St. Ewe’ or very similar. This is a good garden camellia; the single flowers seem to sit better in a garden than the large double, rather exotic blooms of some varieties. 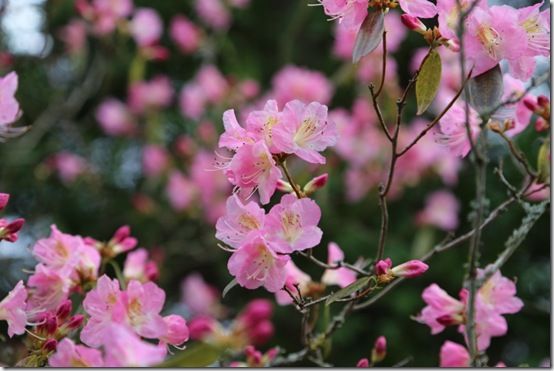 The profuse, fragile blooms of some early flowering rhododendrons underline the mild weather and lack of frost. These are such beautiful, graceful shrubs, carrying their blossom on bare stems without the clutter of foliage. So often they are damaged by frost that moments like this in a garden are to be treasured. These are definitely shrubs for woodland gardens on acid soil. 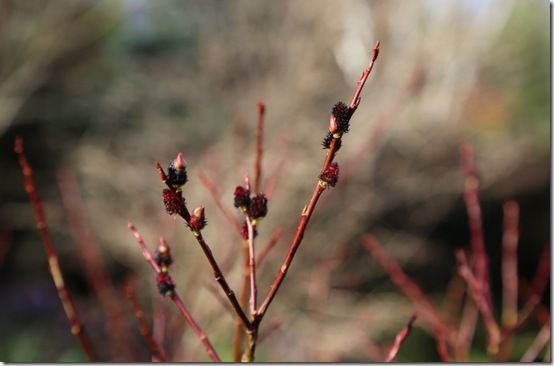 Maybe not as pretty, but every bit as striking are the stunning red-anthered black catkins of the willow, Salix gracistyla ‘Melanostachys’. I love this plant with its light mahogany twigs. Cut back to a few centimetres above ground in early spring it only grows to 1.2 metres (4ft) and makes a wonderful waterside shrub. It’s good to grow for cutting for flower decoration too. 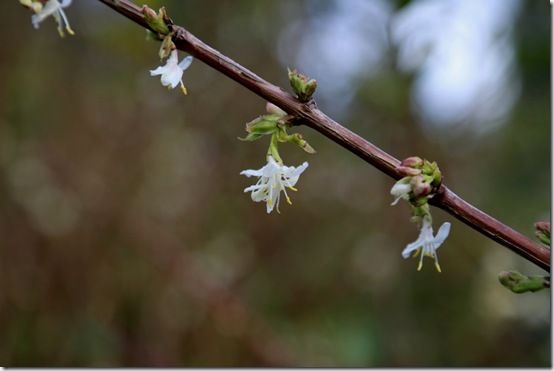 Less visually striking the winter flowering honeysuckle, Lonicera purpusii ‘Winter Beauty’ still has plenty of buds to open. This shrub has a rather sprawling habit when young but grows vigorously as it matures. The small white flowers are hardly striking but their perfume is delicious. In a garden setting I would use this shrub to fill a gap in a hedge or at the back of a border. 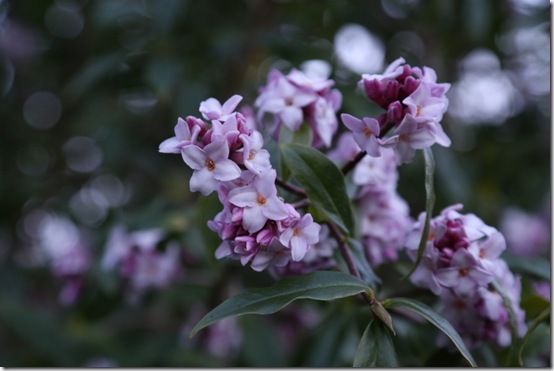 If it’s scent you seek in the late winter-early spring garden Daphne bholua ‘Jacqueline Postill’ is quite unbeatable. A group of them at Savill produced a quite overpowering perfume. I like them more spaced out in the planting; the three in my garden have been filling the air with fragrance since just after Christmas and they’ve still got a long way to go. 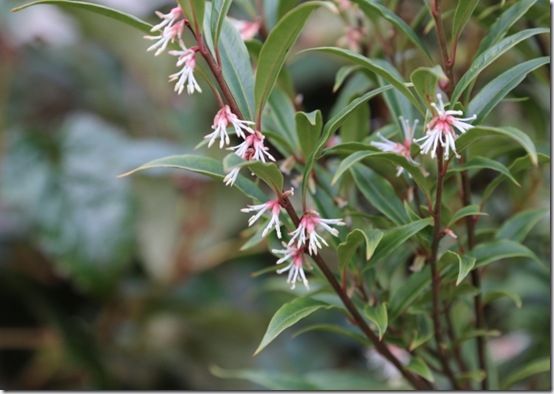 For smaller gardens and shade sarcococcas are another scented alternative. I’ve always preferred the emerald green, white flowered Sarcococca confusa however I’ve grown to love the more airy habit of Sarcococca hookeriana var. dignya. This usually grows taller: up to 90cm (3ft) in height with narrow, we-spaced leaves on pinkish stems. The tiny pink-tinged flowers are particularly good this year and wonderfully fragrant; another good subject for cutting for the house. 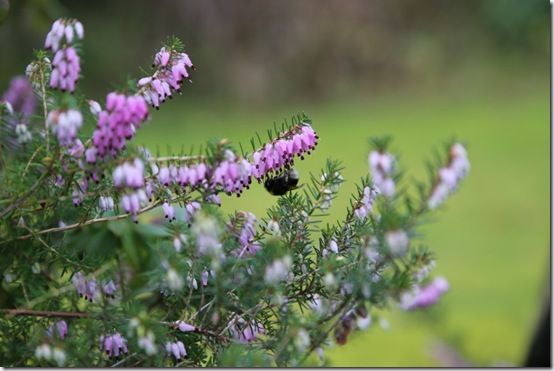 As I said these early flowers are excellent sources of nectar and pollen; particularly important for bumblebees which do not stored a food source. On the few sunny days they’ve been out and about in my garden going crazy for the winter-flowering heather Erica x darleyensis.

Since running my Gardening for Wildlife online horticulture course I’ve become much more aware of which plants to grow that benefit the bees, butterflies and birds in my garden. Why don’t you join me on the course and learn more about gardening for wildlife?