The enduring popularity of the phalaenopsis, or moth orchid as it is commonly known is fascinating. Regardless of how widely available they have become orchids are still captivating plants that inspire. It’s interesting that a bronze sculpture of a single moth orchid bloom by British artist Mark Quinn was the iconic image for this year’s THS Chelsea Flower Show Centenary. Entitled ‘Rush of Nature’ it was created to be auctioned at Sotherby’s to help raise one million pounds needed by the Society for the next generation of horticulturists. 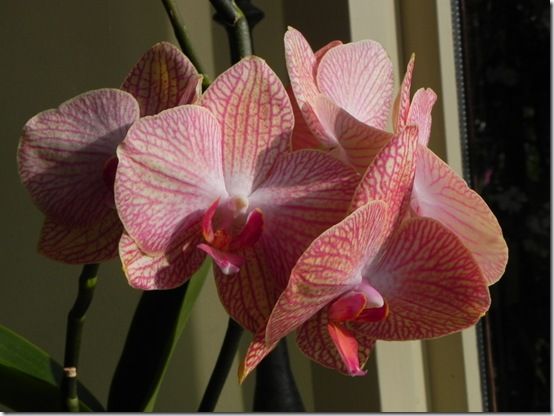 How to care for your orchid

I have always been passionate about orchids myself. As a schoolboy I managed to grow a few; in a tiny, paraffin heated greenhouse, and on the freezing windowsill of the dining room of my parents’ house; orchid care was challenging! At orchid shows I gazed longingly at expensive phalaenopsis, moth orchids. I could not imagine ever being able to afford one. I certainly could not imagine that forty years later they would be our most popular houseplants, surviving in just about every home in the land. I would never have thought that I would be able to buy a phalaenopsis from a supermarket, or that I would live in a house where there was one in just about every room. 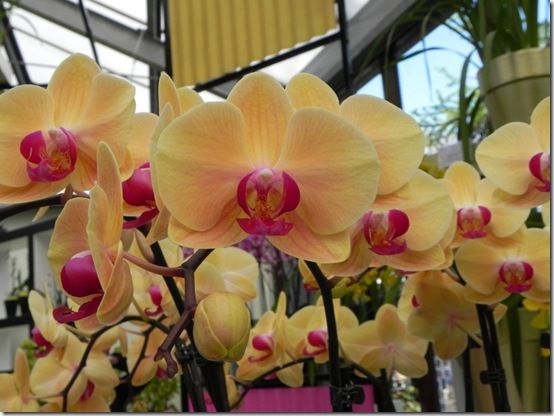 Warmer homes, central heating, and new propagation techniques responsible for large scale production contributed to the popularity of phalaenopsis, moth orchids. The flowers are long lasting, and the plants are remarkably resilient to ill treatment, making orchid care easier. Those that give a plant a little attention manage to get their orchid to rebloom again and again.

Orchid Care:  What are the secrets of success?

Simple: plenty of light, especially in winter. In summer it’s not a good idea to keep your phalaenopsis on a sunny window sill; if you do the foliage may scorch and become unsightly. Having said that do not position it in a dark hallway for too long, especially if you want it to rebloom.

Water regularly; about once a week giving the compost a good drenching, and the allowing it to drain before returning the plant to its pot cover. Occasional feeding with an orchid fertiliser helps, but it is not essential part of orchid care. When the flowers fade, cut back the flower stem to two nodes above the leaves. Often a new flower stem emerges from here, if not it will eventually appear from between the leaves. 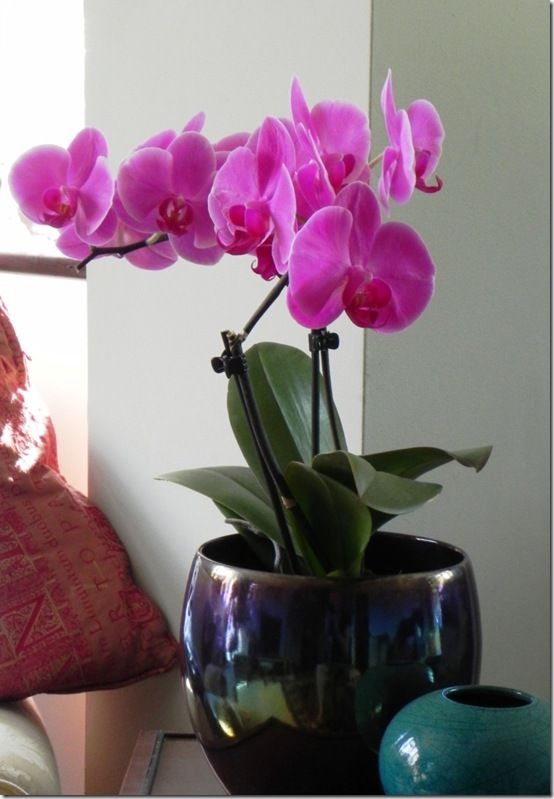 The roots have a mind of their own and love to sprawl at random, much to the annoyance of the tidy minded owner. This is quite natural because these orchids thrive up in the branches of forest trees and those roots are adapted to taking water and nutrients from the air. No you can’t cut them off; if you must you can help them to grow into the space between the growing pot and the pot cover by gently coaxing them in the right direction. Repotting is rarely necessary because a phalaenopsis doesn’t really need the pot it’s in, however it does give the plant stability and makes it easier for you to manage. 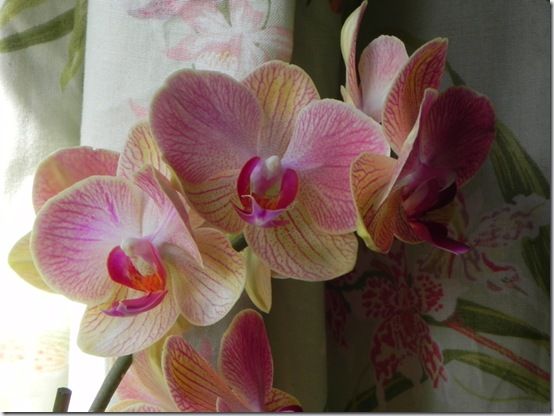 When you do repot you must use a proper orchid compost. The opaque orchid pots are a good idea because unlike most plants these orchids have the ability to manufacture food in their roots in the presence of light. Even if you stand your orchid in a pot cover it will get a certain amount of light through the growing pot; especially if you use one of those special orchid pot covers with the bevelled base. These retain a little water in the base without the plant sitting in it and becoming waterlogged. The dregs of water in the pot cover promote humidity around the roots which your orchid will enjoy. 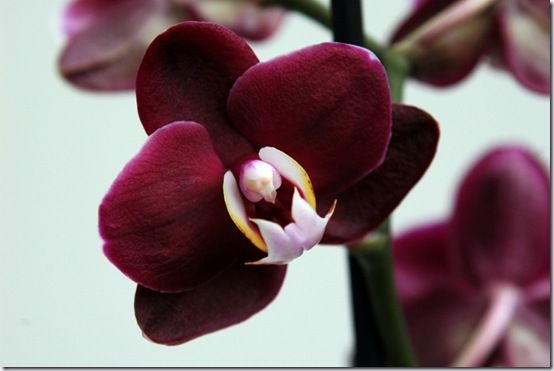 But is that all you need to do to get the best from orchids?

The range of colours and varieties of phalaenopsis available is far greater today than it ever was. You will find a jewel box of colours which varies with the season. The iconic white moth orchid that was such a feature of the fashion scene is only part of the picture; having said that pure white moth orchids are still hard to beat. 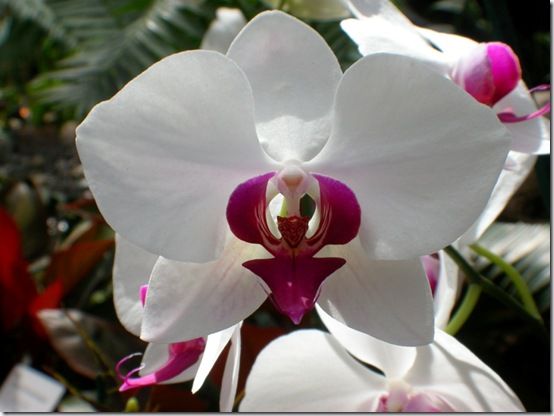 Sunset- orange, pale yellow, spotted, striped, burgundy, pink and orange; it’s all there for you to get creative with. Choose your phalaenopsis as you would any interior accessory; it’s going to be a long-lasting feature in your home. Put it in a well-chosen pot cover that complements the blooms and your room. It might have cost you less than a bunch of flowers but it will certainly last a lot longer 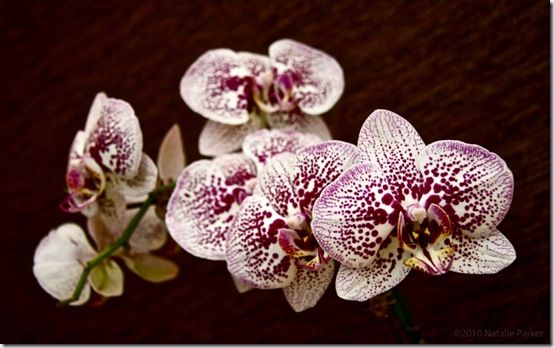 We all have our successes and failures. Do keep your orchid tidy. If you are left with a long straggly stem with just a couple of flowers and a miserable bud then cut it back and start again. If the plant looks ugly and does nothing to enhance your room the throw it away and treat yourself to another. We have a habit of hanging on to invalid plants hoping for recovery. Life is too short and there are plenty more ravishing orchids out there. It cost a few pounds in the first place, it’s given you pleasure, but now it’s time to treat yourself to a new one. Don’t flinch; just do it. One of the greatest pleasures in life is coming home with a new, well-chosen orchid. 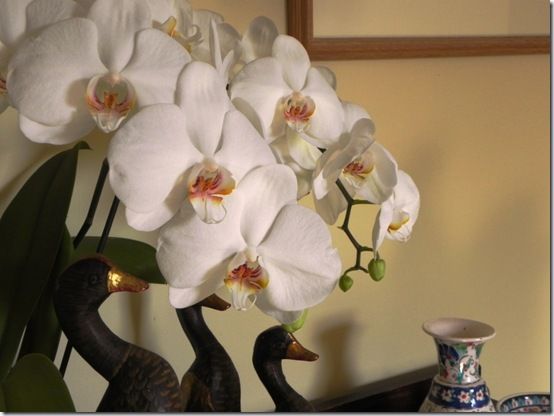 Do you know how to get an orchid to bloom?