Flowering trees of The Mediterranean.
The streets, gardens and parks of towns and cities of Southern Spain are coloured with the blossoms of wonderful flowering trees in late spring and early summer.

Pavements and grass are scattered with fallen petals; a colourful confetti adding a festival atmosphere to the busiest sidewalk.

On a recent trip to Seville I was stunned by the number and variety of flowering street trees, in addition to the vast number of orange trees that the city is famous for. 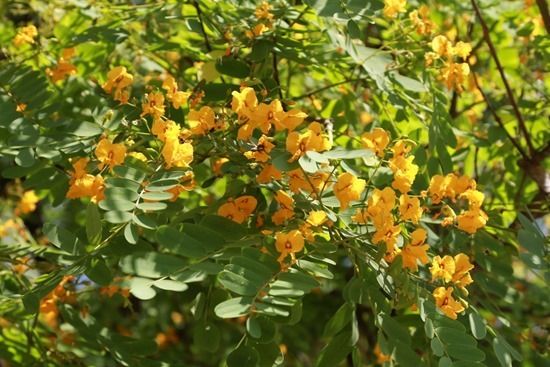 Pride of Bolivia, or rosewood is not a tree I had noticed before, but in full bloom it is difficult to miss.

With a loose, robinia like habit and light green pinnate leaves it casts a light, dappled shade and moves gently with the breeze.

The small orange cassia-like flowers are carried in loose, lacy clusters. Flowers and petals fall scattering the pavements with saffron. 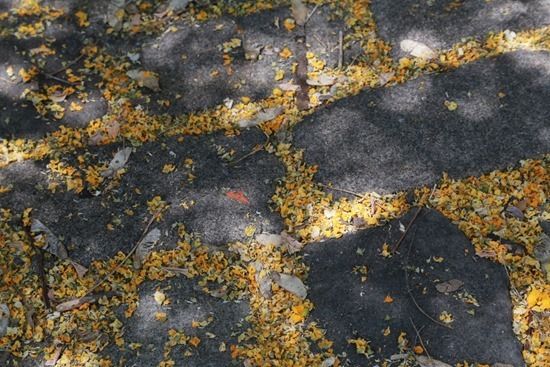 This tree is regarded as invasive in Australia, where it threatens native species in certain areas. An interesting relationship as eucalypts are so widely naturalised in Southern Europe. Tipuana is South American in origin and is widely used as a street tree in Southern Spain. I'm sure I've seen it on many occasions, but assumed it was false acacia, until I saw it bloom. 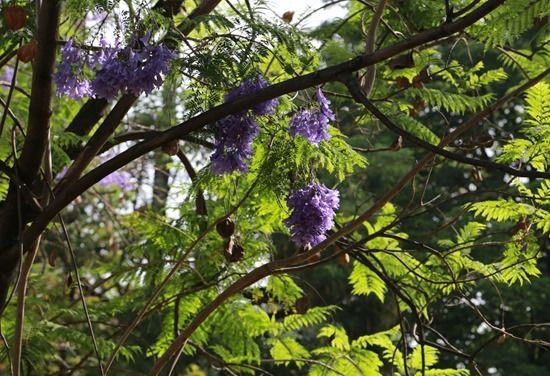 This is probably one of me most arresting of flowering trees. Feathery mimosa-like foliage varies in density on the branches. Some are quite twiggy and bony in habit carrying large, brown seeds from previous blooms.

Other threes are lush with a fine plumage of rich green leaves. The large, heavy clusters of rich purple-blue flowers are truly spectacular and stand out even against a bright blue summer sky. Trees flower randomly at other times of the year.

I've seen them bloom in early spring in Madeira and in late summer in Greece but early summer is their main season. Jacaranda hails from south-central America. 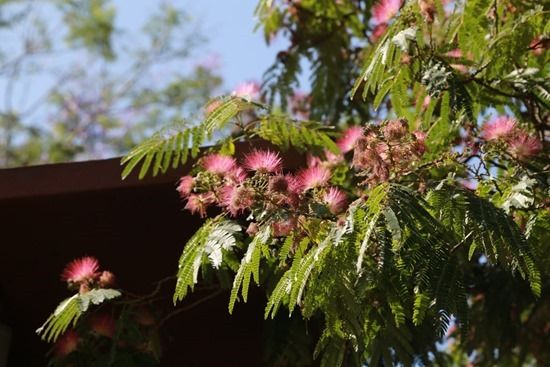 This is a lovely small, flat-headed tree with fine, feathery acacia-like foliage. In cooler climates it makes an attractive small tree or an addition to an exotic bedding scheme, but it needs enough sun to bloom. As a street or garden tree in a warm, dry climate its fluffy pink flowers are spectacular. They bristle and shine atop the softly arching branches, set beautifully against the feathery green leaves. A native of south-western and eastern Asia it is a good choice for warm, sheltered coastal gardens and sunny courtyards and can be grown in a container. 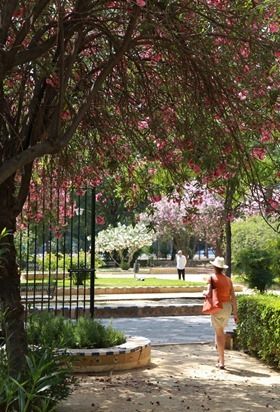 Commonly known as oleander is a widely naturalised shrub; so widely grown and cultivated its origins are uncertain.

It is planted alongside motorways and commercial developments throughout Southern Europe and in many other parts of the world.

Its wide use as a landscape plant is somewhat surprising due to its highly toxic nature; all parts of the plant are poisonous if eaten. In many dry, warm regions it is widely naturalised and invasive.

Despite any negative characteristics oleander flowers are highly attractive in both single and double forms.

Allowed to grow as a large shrub, which can be regarded as a multi-stemmed tree, few plants put on a more spectacular display for several months from spring into autumn.

This has to be regarded as one of the ultimate survivors of the plant world, surviving and thriving in summer drought like a true xerophyte. 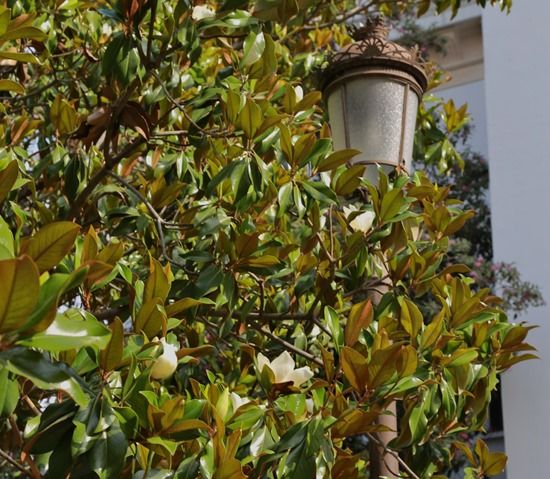 The evergreen Southern magnolia originates from the Southern U.S., but is widely planted in temperate and Mediterranean regions across the world. It is a versatile subject which can reach a great age and vast proportions.

It also lends itself to training against a wall or shaping by careful pruning. The large lemon-scented flowers appear from early summer in Mediterranean regions, late summer in cooler climates.

The dark green, glossy leaves often have wonderful tan suede-like undersides which cleverly link the tree to surrounding stone and brick. It is bold and architectural enough to stand out against large imposing buildings. 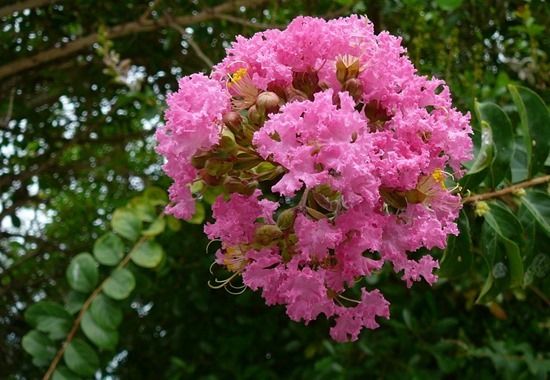 The crepe myrtle is an attractive tree with small shining green leaves and large, lilac-like clusters of pink, red, purple or white flowers anytime from late spring to late summer.

In cooler regions it is deciduous, evergreen in warm and tropical climates. It can be pollarded, and as such is an architectural feature in the dormant season. The blooms have crumpled, crepe like petals, hence the name.

A native of India it is widely planted in many parts of the world. Dwarf and hardier forms are becoming more popular in cool temperate regions. 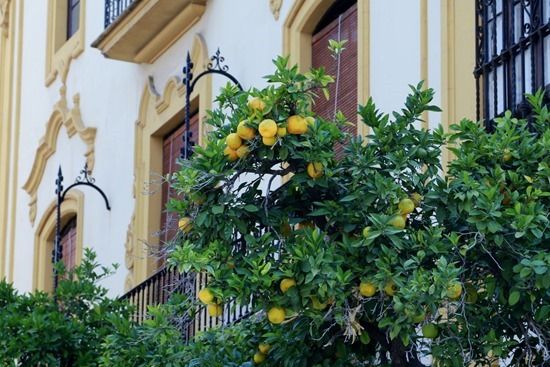 As I saw all of these trees in flower in Seville in early summer, I have to mention the orange trees which green streets and courtyards throughout the city.

I would love to visit when these are in bloom, the fragrance of so many citrus flowers must be amazing.

Some carried young embryo fruits and a few still had oranges; the main season of production is late winter and I assume the fruit of street trees is harvested; there are so many. A few trees still managed shed ripe oranges onto the ground.

These are large, pithy and with that sharp, bitter Seville orange flavour. Very reminiscent of the taste of marmalade, for those of us that eat it. None the less they are juicy and refreshing and hard to resist on a hot day. 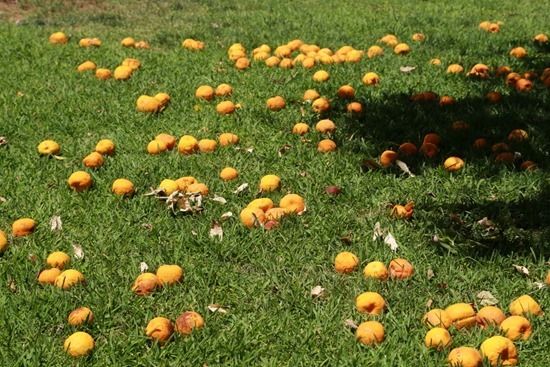 My 4 week online course on trees helps with the selection of trees for gardens of all sizes, whatever climate you are choosing for. It also deals with how to use trees as part of the planting design of the garden and how to get the best from them. http://www.my-garden-school.com/course/a-professional-guide-to-choosing-using-and-planting-trees/