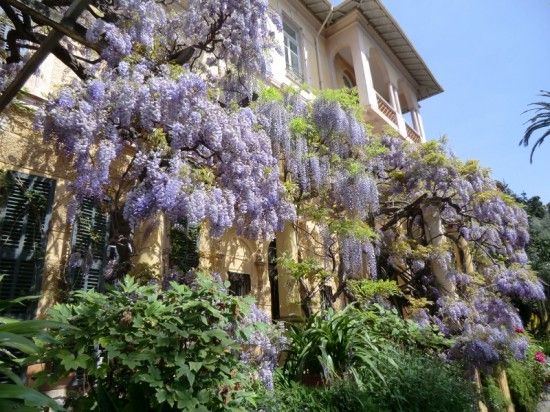 Ever since my first visit I’ve had a soft spot for the French and Italian Riviera. The soft climate, warm sunshine, diversity of the flora, wonderful coastal landscape and attractive towns; and of course, the food and wine. However I am certainly not the only Englishman to be drawn to this area; over the years many from further North in Europe and from North America have holidayed or settled here. The delightful town of Menton, the ideal place to base yourself if visiting the area was hugely influenced by the English aristocracy in the early 20th Century. During the previous one hundred years some of the well-known gardens in the area were created by some of the great names in garden history. A few days in Menton would give you the opportunity to visit the Mediterranean masterpieces of some great gardeners and botanists. 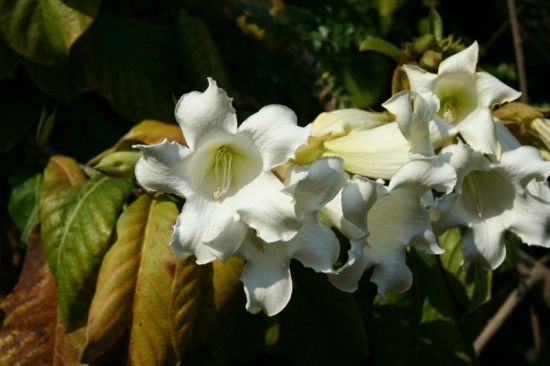 Just like the desire to grow rhododendrons that often possesses those gardening on alkaline soil, those gardening in cooler climates long for sunshine and warm winters to be able to grow more exotic plants. The Riviera offers just that and you will find a palette of plant material that includes temperate, tropical and Mediterranean subjects; everything from cacti and orchids to palms and cypresses. From mid spring walls, columns and trees are draped with lilac wisterias and the clotted cream coloured Rosa banksia ‘Lutea’. Orange and blue strelitzias colour the central reservations and a great variety of palms line the streets. Brugmansias bloom, their fragrant hanging trumpets filling the air with narcotic fragrance. 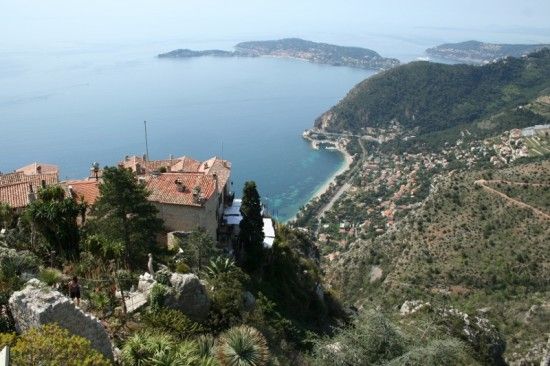 If you arrive via Nice airport then the medieval village of Eze is a natural stop over en route to Menton. This is one of the perched villages found along this coastline. Originally sited in strategic look out positions for defence against pirates and invaders. The quaint streets lead to an incredible garden in the ruins of the hilltop castle; a stunning collection of cacti and succulents clothe the steep rocky slope with fantastic views of the coastline.  The garden is the work of English botanist Maybud Campbell; whether you like xerophytes or not you will be bewitched by their variety of shapes, forms and their ability to survive. 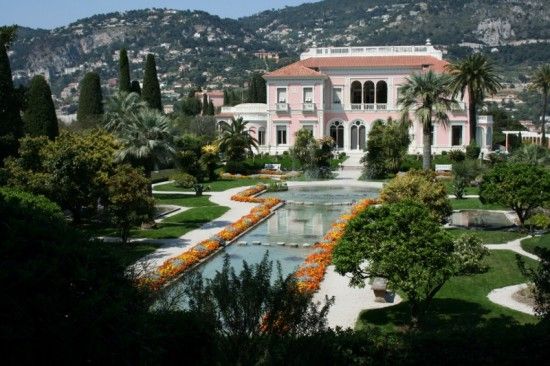 Probably the most opulent and popular garden along the French Riviera is the Villa Ephrussi de Rothschild at Cap Ferrat. The Cap is one of the most sought after pieces of land in the world on which to own property. Royalty and the international elite have long settled here as their playground, especially as an escape during the winter months. Villa Ephrussi is an opulent palace built during the Belle Epoque by Beatrice Ephrussi de Rothschild. In the garden world the name Rothshchild is usually associated with Exbury in the South of England, world famous for its rhododendrons.

Villa Ephrussi is an extravagant creation of art collections, magnificent gardens and breath-taking views overlooking the coastline. There are 17 acres of themed gardens inspired by Japan, Italy and Ancient Greece and many more. These are an outdoor art gallery containing some of the treasures collected by Beatrice. 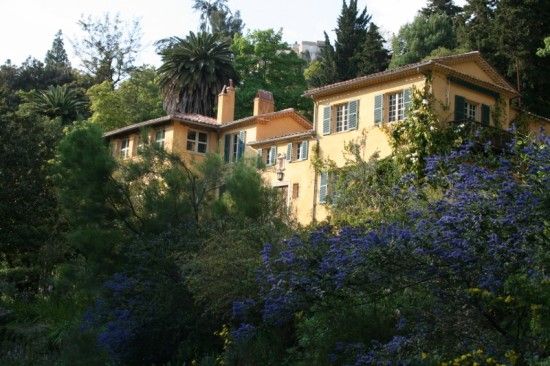 The garden at Serre de la Madone, hidden away behind Menton is a total contrast. This is the Riviera garden of Laurence Johnston, best known for the famous garden at Hidcote Manor, Gloucestershire in the heart of England. He was a fairly reclusive character, but travelled widely collecting plants; Menton gave him the opportunity to indulge his passion and grow a wider range of more tender plant material. 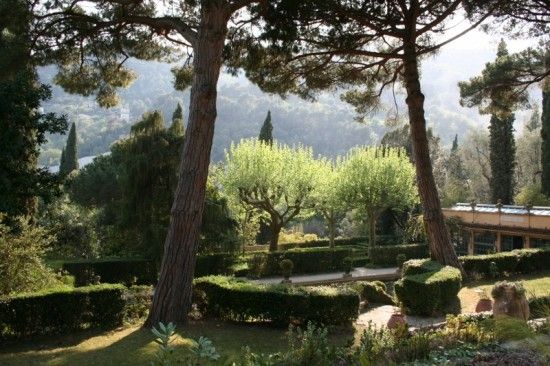 Serre de la Madone is a garden divided into rooms, like Hidcote. Here the similarity ends. Do not expect the manicured finish of Hidcote; after Laurence’s death in 1958 the garden fell into a period of neglect. It is in the process of being restored and has a somewhat forgotten atmosphere. Some are disappointed that it is not like Hidcote. I find it romantic, atmospheric and very beautiful. Johnston undoubtedly did; he intended Serre de la Madone to be his winter retreat, but eventually he went to live there and stayed until his death. 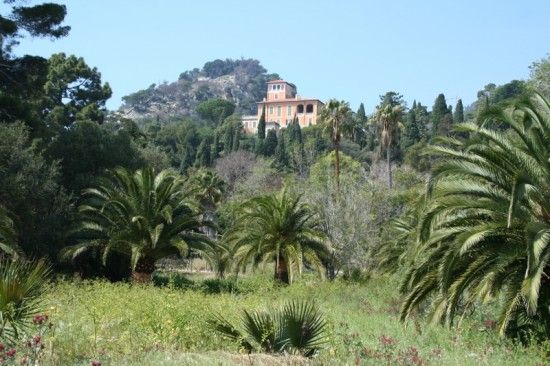 Also in Menton you will find Val Rahmeh. This was first owned by Sir Percy Radcliffe and then transformed by the wealthy, if not slightly eccentric English botanist Miss Maybud Campbell (known as La Dame aux Daturas). She added many unique tropical and sub-tropical species before giving the garden to the French Natural History Museum who have continued to maintain it in the spirit of her legacy. The garden has a unique microclimate and an average annual temperature of 17 centigrade, remarkable for this part of France. Although other gardens may be better known this is one of the loveliest and the most naturally colourful. 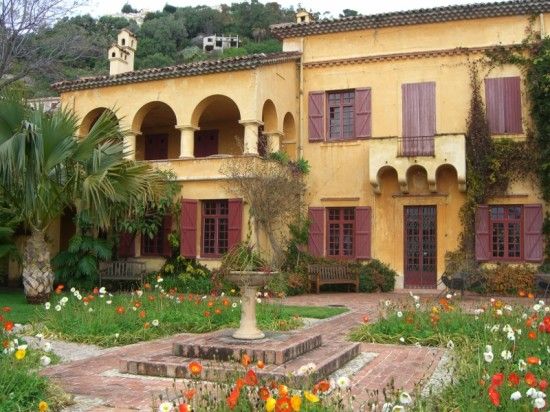 Just across the border into Italy you will find the famous botanical garden La Mortola created by Sir Thomas Hanbury and his son Cecil, with plants collected from their travels worldwide.  The gardens were severely damaged in World War 2 and were sold to Italy when they became a no-mans’ land in 1960. The garden is now looked after by the University of Genoa and has amazing exotic plants that luxuriate on a series of terraces and gentle paths that run down to the sea. The gardens contain plants from all six Mediterranean climatic zones of the world. The setting is wonderfully romantic against the backdrop of the Mediterranean. 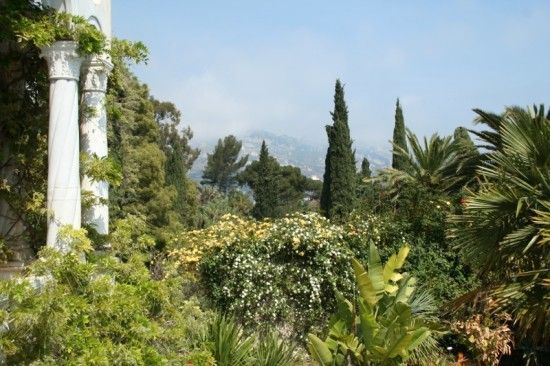 Other gardens to visit in the area:

Villa Boccanegra just over the border in Italy (private)

Jardin Exotique in Monaco.
This area makes a wonderful destination for a garden tour. Going on an organised garden tour takes away all of the hassle of driving, checking opening times, organising to see as much as possible in the few days available. Heritage Touring offer a wonderful tour based in Menton. It’s just one of their garden tours designed for you to get the best from some of our most wonderful gardens. Check out the website for details: http://www.heritagetouring.co.uk/Tours-Heritage-Touring.html