Grafting vegetable plants is nothing new; I first came across grafted tomatoes when I was at university over 30 years ago. The idea is to graft a prolific fruiting variety onto a vigorous rootstock, so you get the best of both worlds. This is done at the seedling stage and the rootstock and scion (top part of the plant) quickly grow on together. Why can’t the fruiting variety grow on its own roots? I hear you ask. The answer it: it can, but not as well. When a plant is concentrating on producing flowers and fruit it may well become weaker and the root system that develops is insufficient to become the real powerhouse of the plant. 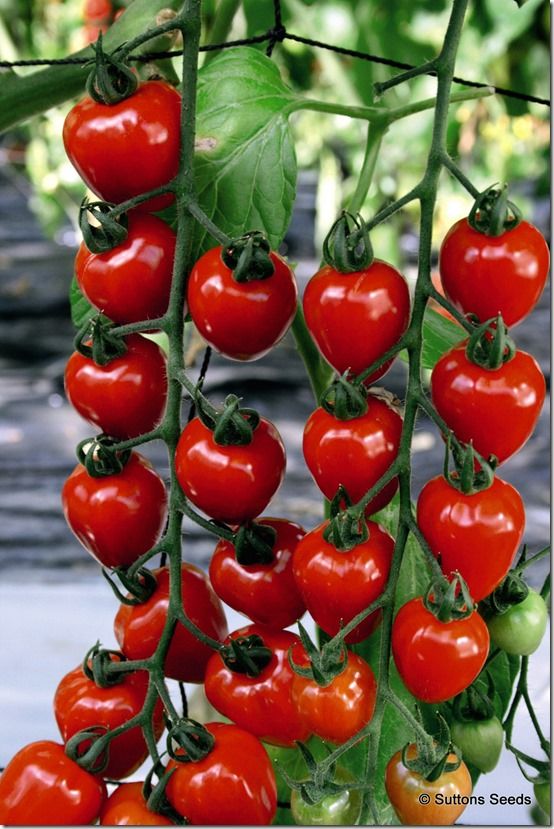 A grafted vegetable plant will therefore grow more vigorously, producing heavier crops. It will start to crop earlier giving you a longer season. It will require less heat because it is hardier; it is also more resistant to pests and diseases. What’s more it is less sensitive to nutrient deficiency; so if you forget to feed occasionally it will not sulk.

Suttons Grafted Vegetables were new just a couple of years ago: tomatoes, peppers, aubergines, cucumbers, chillies sand sweet potatoes. You can grow them in a sunny spot outside, a cool greenhouse or a conservatory. Personally I have given up growing tomatoes outside (I do not own a greenhouse), because they always succumb to blight in my garden. We get one or two tomatoes, and then the plants collapse. 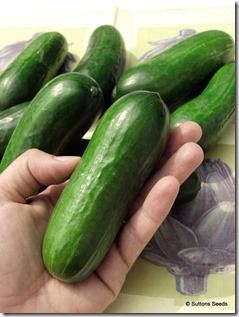 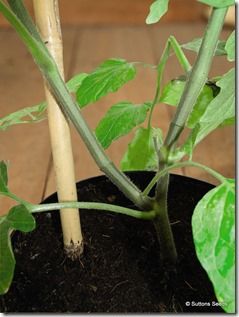 However I decided I should try out the grafted tomato plants, so I bought two Tomato ‘Elegance’ in late spring and planted them in large pots in the conservatory. I did not have great expectations, but I potted them in loam based compost and stood the pots in ordinary saucers. The plants grew quickly and soon produced flower buds. I did feed with liquid tomato fertilizer soon as the first truss was set and kept feeding relatively regularly through the season. 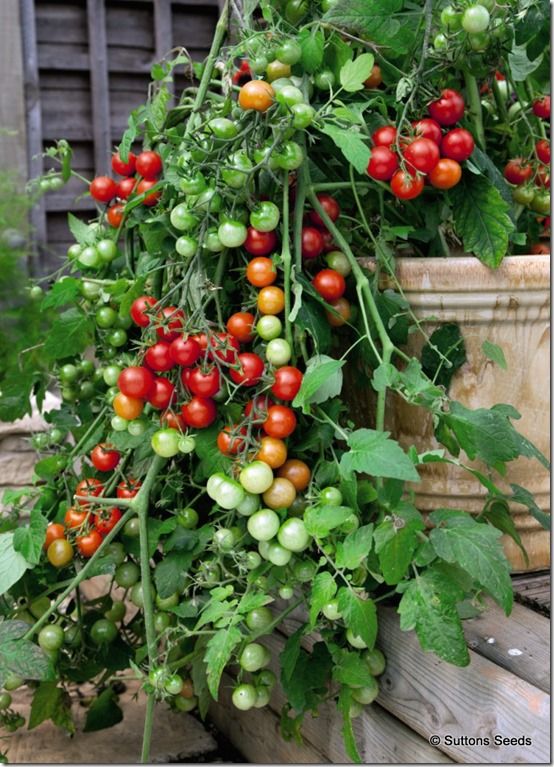 We started to pick tomatoes in early summer, and we picked continuously through summer, autumn and into winter. By then the plants were right into the roof of the conservatory. I finally took them out in New Year after feeding sixteen people with tomato and mozzarella starters on New Year’s Eve – all toms picked from our plants. We didn’t buy a tomato for 6 months! Now that’s what I call value.

Today Suttons promise even more from their grafted tomatoes – a new technique, grafting above the first true leaf, tricks the plant into even earlier fruiting! You can even get double grafted plants where two varieties are grafted onto the same rootstock. The plants are branched near the base and you simply support the two vines as they grow and pick two different varieties off the same plant.

Other varieties in the Suttons range include peppers, chillies, cucumbers, aubergines and sweet potatoes; all promise excellent results. This is the way to try these veg, especially if you have never grown them before. 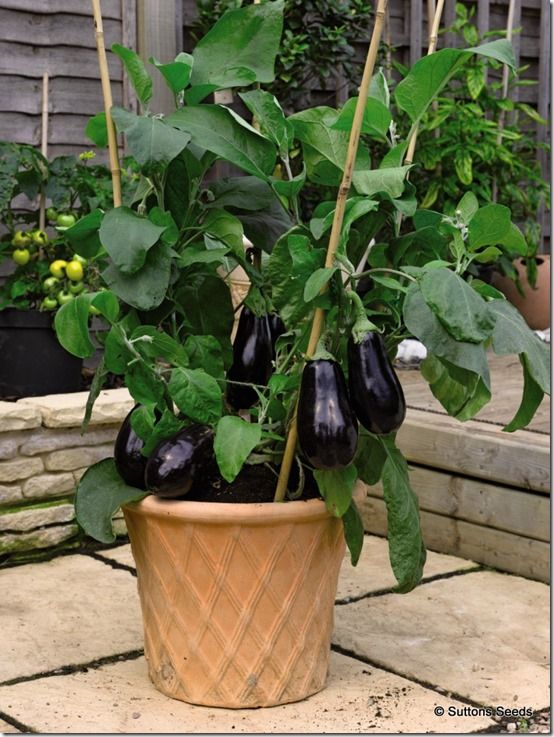 I aim to try Aubergine F1 Scorpio. This grafted aubergine is ideal for a pot on the patio in a sunny position. It produces heavy crops of large shining purple-black fruits up to two months earlier than standard varieties. 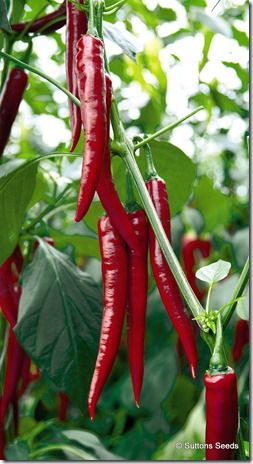 I have grown bell peppers or sweet peppers outside before, but the fruits never get very big, even if they are deliciously sweet and crisp. Grafted Pepper F1 Britney produces heavy crops or large, juicy peppers that are quick to ripen from green to red, so you should get both colours on the same plant.

I think chilli peppers are worth growing. They are an expensive ingredient to buy and having them on tap so that you can pick when you want them is as a real advantage. Grafted Chilli Pepper F1 Medina looks great and again will provide green and red chillies on the same plant over several months.

Up until now I have never thought it was worth growing cucumbers in the UK unless you had a greenhouse. Grafted Cucumber Iznik is an all female variety; this means that every flower produces a succulent, crisp mini-cucumber. Resistant to disease it is suitable for outdoor cultivation and crops well even in our cool climate here in the UK. One plant in a pot on the patio should keep you in cucumbers throughout the summer.

If you haven’t grown sweet potatoes before then try a grafted plant in a large pot of multi-purpose compost on the patio, or use one of those potato bags. Sweet potatoes are delicious versatile vegetables that you can use in so many ways. They make fabulous gratin, bake well and are an interesting addition to dahl. 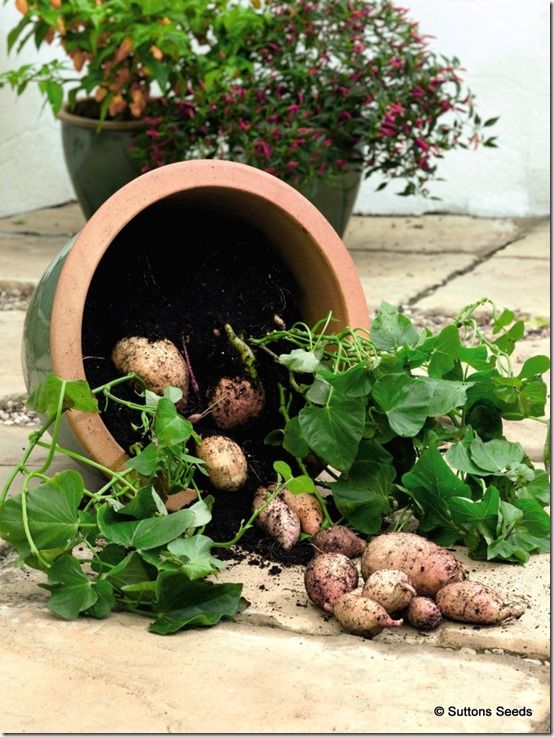 The great thing about Suttons grafted vegetable range is there are so many varieties to try. Personally I will still grow a plant of Elegance but I’m also going to try Belriccio a delicious beefsteak variety that’s great for slicing. I also like the idea of Orangino, a cherry tomato that’s a lovely shade of orange – they’ll look lovely cut in half in a bowl of fresh rocket and lettuce picked from our patio pots. 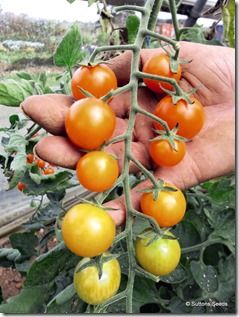 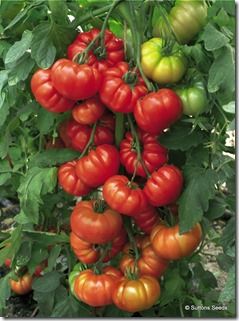 I will also try grafted tomato Fi Lizzano outside in a pot. Now I know I said I would never bother with tomatoes outdoors again because of tomato blight; well this variety is blight resistant. It’s a bush tomato so you don’t need to remove side shoots and if it’s as heavy cropping as other Suttons grafted veg. I’m on to a winner. I think Tomatoberry is also worth a try. The shining red, strawberry-shaped fruits look delicious and it also promises excellent blight resistance outdoors.


Take a look at the full range of Suttons Grafted vegetables here which you can order online.  Join The Great British Garden Revival #gardenrevival - get growing your own fruit and veg.