I have a couple of olive trees in the garden. One small one in a pot at the front of the house which is kept pruned (irregularly) as a small standard. The other down by the summerhouse in the gravel garden. Both survive happily despite the fact we are a cold garden in winter, quite shaded with regular frosts.

I like the olive for its narrow green leaves, silver on the reverse carried on silvery stems. Both trees flower in summer and I’ve known the larger one to produce small green olives: a novelty rather than a useful crop. Although some claim to harvest their olives in cooler regions, this should never be your objective when you grow them. 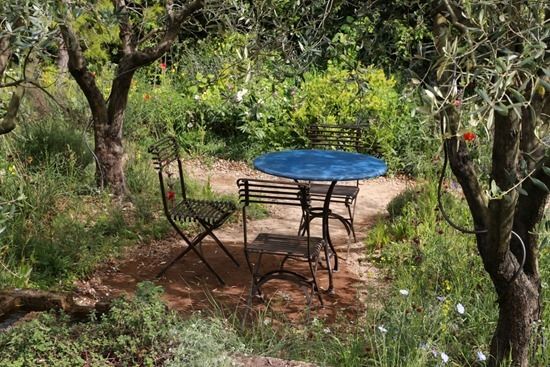 I’ve also used olives in several gardens I have planted. They work brilliantly in large pots in courtyards. As they are evergreen they bring all year interest and a lighter habit than most evergreen trees. They have also become very popular in recent years with the increasing profile of the olive in the diets of those living in cool temperate regions. Here the olive is also seen as a bit more of a challenge to grow and a way of bringing a bit of the Mediterranean into our gardens. Witness the popularity of the L’Occitaine garden at last year’s RHS Chelsea Flower Show. 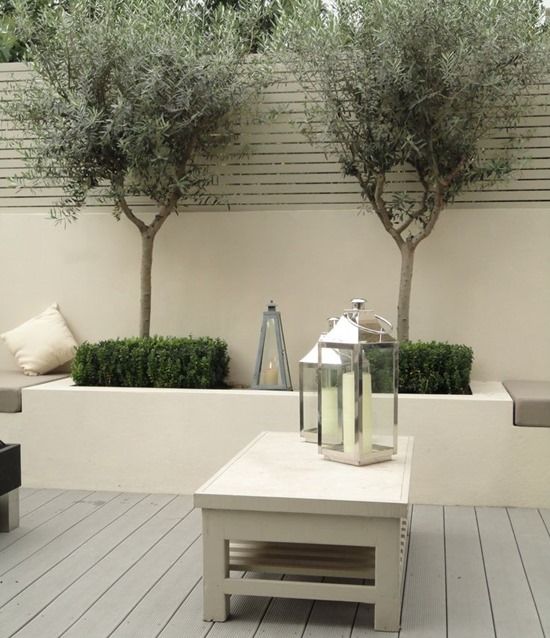 Like many people, olive oil is a part of our diet that we consider essential today. We use it on salads, we cook with it, we use it in bread and we dip bread into. We drizzle it, pour it and try different types from Italy, Greece, Turkey and Spain. It’s a regular item in our shopping baskets. However, I remember it as a boy as a small bottle of something that was bought from the chemist that my mother rubbed on her legs. But in those days, not so very long ago, the Mediterranean diet was not as widely adopted as it is today. 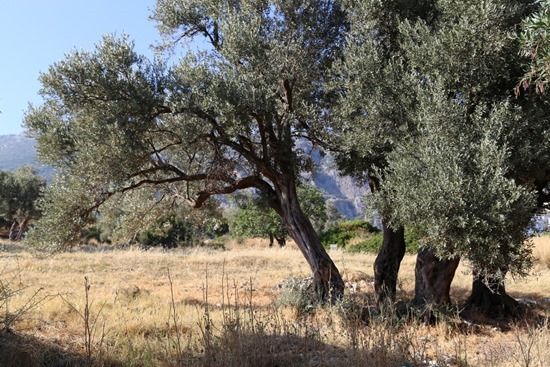 Since ancient times olive oil has been considered sacred. It was used for lighting; the original fuel of the eternal Olympic flame. It was used for anointment and symbolically in religious ceremonies. The olive branch is regarded as a symbol of peace and abundance. Branches of olive were found in the tomb of Tutankamun. The ancient Greeks used olive oil on their hair and bodies as a sign of good health. 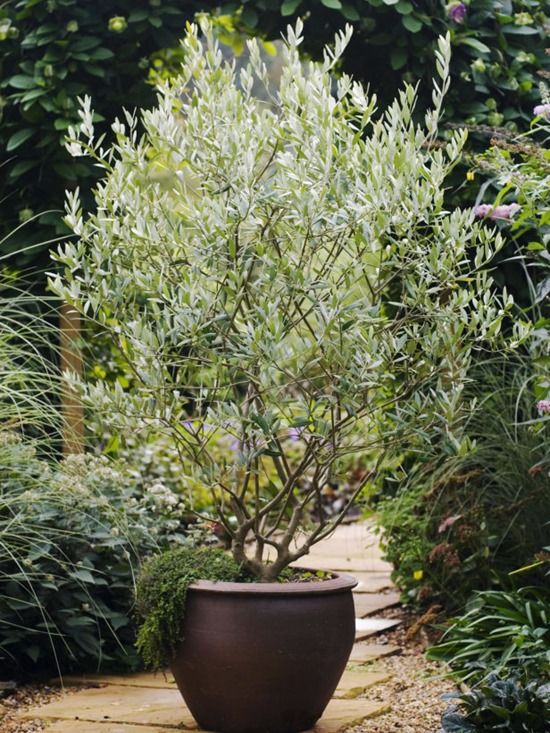 Man has co-existed with the olive, Olea europaea for 5-6,000 years. The cultivated olive as we know it originated in the Eastern Mediterranean: Turkey, Syria, Lebanon, Israel and Palestine. From there to Crete and North Africa. Today it is growth commercially throughout the Mediterranean and is widely naturalised in those areas. Ancient trees on barren hillsides could not be more different from the manicured and tamed specimens that have become so popular in gardens. 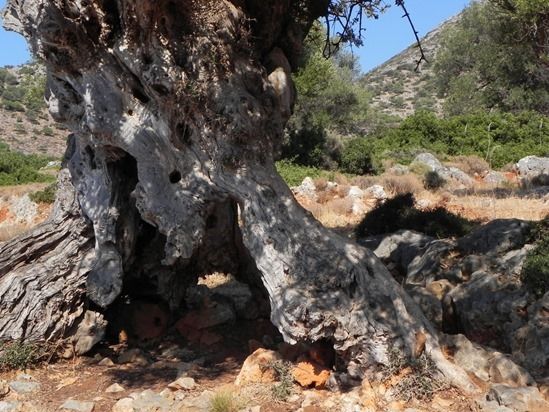 Olives prefer alkaline soils. Having said that I grow it satisfactorily on slightly acid sand. In a pot I would choose a loam-based growing medium with good drainage. Olives don’t need lots of organic matter in the soil and they hate soggy wet conditions. They cope with cold weather, although they may drop some of their silvery-evergreen leaves in severe winter weather. Although they hail from warm, dry countries they are seen growing at quite high altitudes where night temperatures plummet and the wind is hostile in winter. 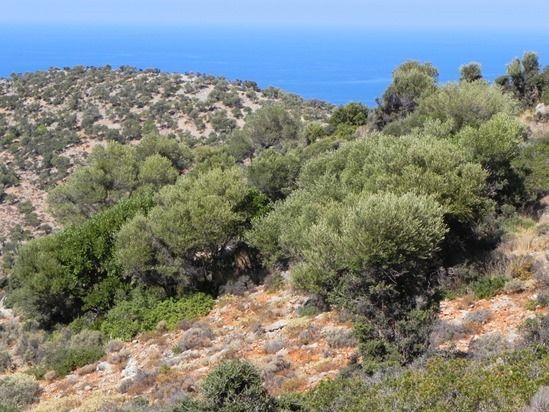 They love coastal conditions; originally it was thought that olives would not grow if they were too far from the coast. They will also appreciate the warmer winters offered in seaside gardens. They are very drought tolerant, so ideal in pots and containers that are watered irregularly in dry weather. They have an amazing power of recovery. They can regrow from the roots if the original tree is severely knocked back by frost. In their native environments. They can live for hundreds of years and they can continue to be productive if pruned and maintained. 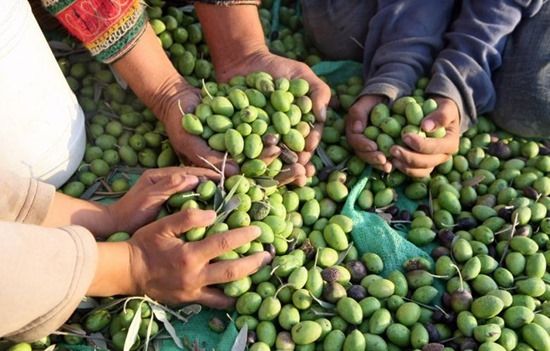 Olives are usually harvested in autumn and winter and pruned in late winter and early spring. As ornamentals in pots and gardens pruning at this time promotes bushy growth and prevents that plants from becoming straggly. Having said that growth can still be quite vigorous during the summer months, so if you are maintaining a relatively compact plant, like my little standard olive in a pot, you will need to pinch out the tips regularly. 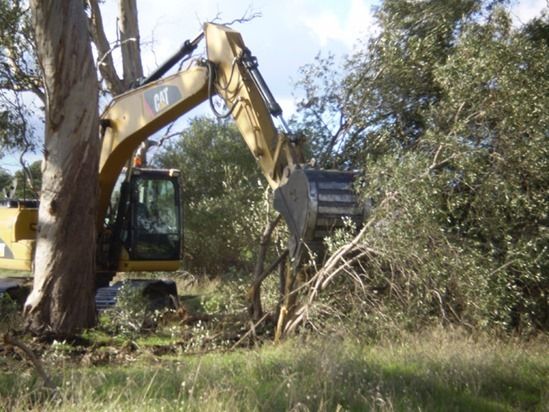 Over the centuries olives have been introduced to other parts of the world and have become a weed in some as they have been naturalised. This is particularly try in southern Australia where naturalised olives have invaded native woodland. Some claim the high oil content of the tree increases the risk of bushfires which is interesting when it grows alongside eucalypts. 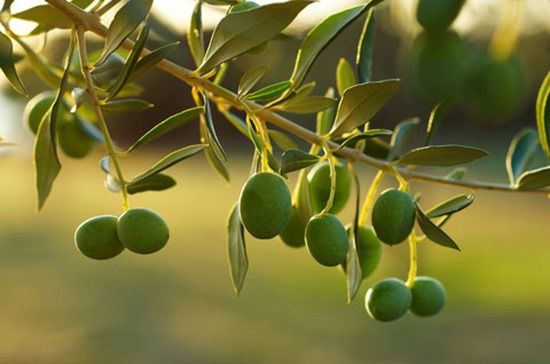 Olives are the most extensively cultivated food crops in the world: of enormous economic importance. To the gardener they are useful small evergreen trees. They can be trimmed and trained and provide a lighter alternative to bay. They can be allowed to grow naturally and gracefully. For those living in cooler countries they are a way of bringing an element of the Mediterranean into a garden. With our increasing interest in food as something more than a means of survival they emphasise the link between the garden and the plate. However most of all they are a link with history and man’s evolution with plants.