A walk around the garden after a long spell of damp weather will reveal various leaf problems of evergreen shrubs. At the end of winter these are particularly evident as the leaves have been on the plants for a year or more. They will soon be covered up and eventually replaced by a flush of new spring growth. Some problems are physiological; in other words caused by the growing conditions and age of the foliage. Others are caused by fungal, bacterial and insect pests. The first reaction may be to head for a cure: some kind of chemical or organic spray treatment. However this may be wasted effort if you give the wrong treatment, or the problem is not treatable in that way. Various leaf spot problems are the ones which are most often asked about; here’s an idea of what to do about them. 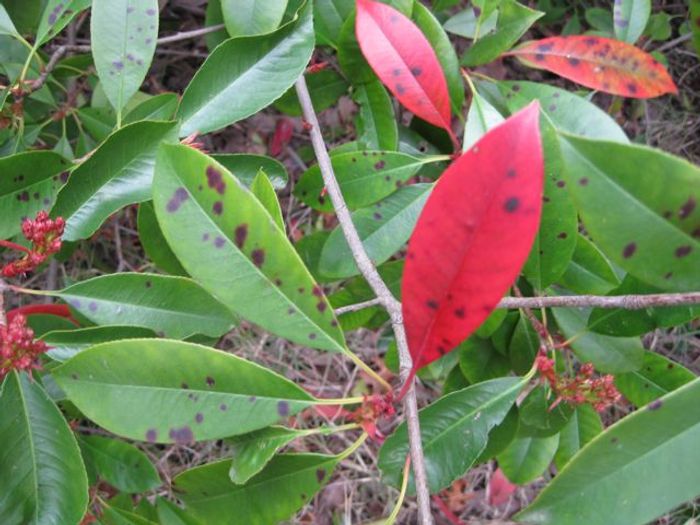 Leaf spot diseases appear on lots of evergreen shrubs at all times of the year. They are often fungal, sometimes bacterial and may be just down to the growing conditions when the plant is in distress.

Physiological leaf spots, in other words caused by weather, soil, starvation or drainage are usually just blotches of discolouration, sometimes red, sometimes brown. Take photinia for example. It often suffers from leaf spot after mild, wet winter weather. If the problem is physiological the spots are normally small and do not have dead, slightly indented centres. 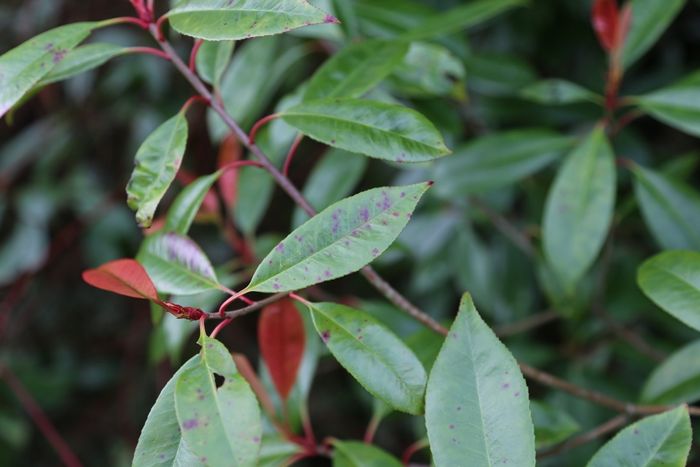 If the problem is fungal (often caused by a fungus called entomosporium) the small red or dark brown spots which first appeared gradually become larger and the centres turn dark brown and die becoming greyish. These are surrounded by rings of red discolouration, often referred to as halos. The leaves often yellow and fall and in bad cases the shrub can lose most of its foliage. Spraying with a fungicide will not cure the already damaged leaves. The best treatment is to hard prune, if the shrub is at all leggy. If not shorten back the branches and pick off as much of the infected foliage as possible. Clear up any fallen leaves and burn or dispose of them; do not compost. Then feed with a balanced general fertiliser; I would use rose fertiliser, especially as photinia is a member of the rose family. Then if you are going to spray with a fungicide, spray the new growth as a prevention of re-infection. 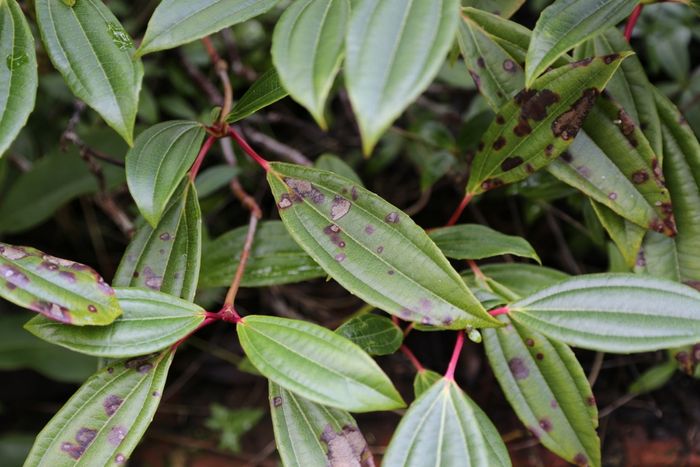 Evergreen viburnums suffer from similar leaf spot diseases caused by a variety of fungal pests. These usually develop in damp summer weather, but when winters are mild they are just as likely to develop then. They usually infect older leaves first. "Spots" are more irregular and often influenced by the veining on subjects like Viburnum davidii. The dead areas are greyish in colour.

Better air circulation helps, so reduce competition from neighbouring shrubs with pruning and thin growth a little to allow the air to move through the shrub. This helps to keep the leaves drier and prevents the fungal spores from spreading. As with photinia removal of infected leaves helps. If the shrub is badly infected pruning off the badly infected stems helps as this stimulates vigorous growth. Again feeding helps to strengthen this new growth making it more disease resistant. 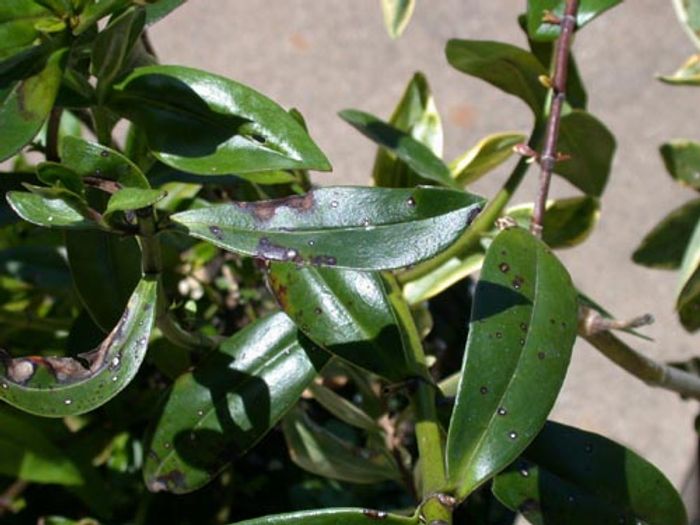 Hebes, especially the larger-leaved varieties, are notorious for getting leaf-spot diseases. These are particularly a problem in damp winter weather when the plants are not growing quickly and where there is poor air circulation. This is why growers have such a problem with them in production, especially if they have overhead irrigation which leaves the foliage wet. Hebes rarely have problems in coastal gardens and on windy sites that are not too cold. Unlike other evergreens they are not good at growing through and recovering. If you suffer from leaf spot problems with hebes my advice would be to try the tougher, small-leaved varieties. If you still have problems give up growing them. 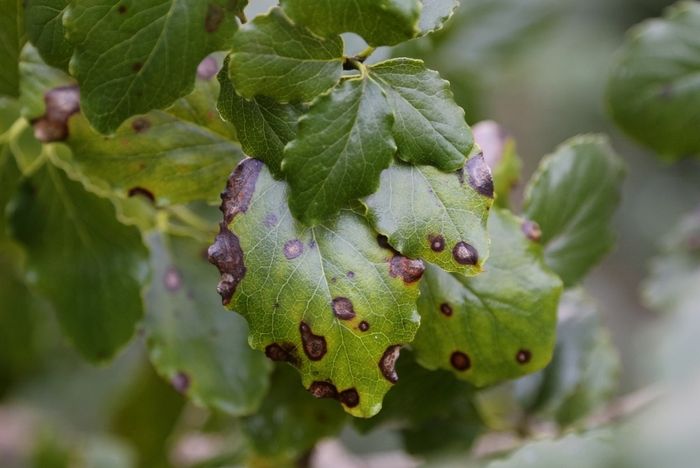 These are just a few examples. Other shrubs that suffer from leaf spot diseases include escallonia, aucuba, garrya (top picture) and Prunus laurocerasus.