How to Improve Difficult Soils.

In the last article in this series, we looked at how to prepare soil ready for spring planting.  In an ideal world, the winter would be the ideal time for digging over the garden. So the elements have a chance to work on the soil before cultivation begins again in the spring.  It is during this digging that you can do much to improve difficult soils. ‘Difficult’ means those that may be hard to work with or those that, because of their poor structure, are either too wet or too dry for good plant growth, or lacking in essential humus or organic matter.

Soils can be divided into four main types: clays, sands, chalk soils and loams. Loams come midway between clays and sands. They are usually easy to work and provide ideal conditions for plants. Clay, sand and chalk each have special charac­teristics that can make them difficult soils and it may take several years to turn them into easily-managed growing mediums. 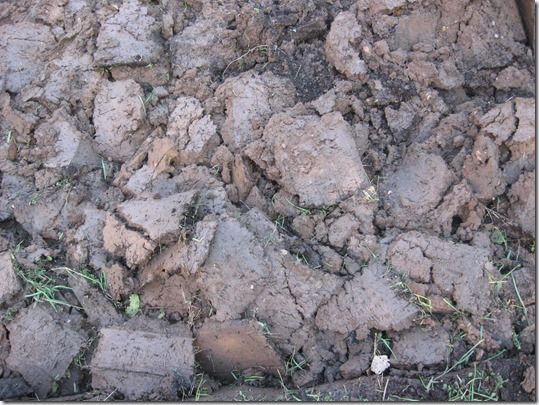 Clay is commonly known as a heavy soil because it is very hard to cultivate - both to dig and to prepare for seed sowing or planting in the spring. Because of its chemical composition it has a very dense structure and is able to hold large amounts of water.  It is therefore a very wet and sticky soil and takes a long time to dry out and warm up in the spring.

During wet weather and in autumn and winter, clay soils can become waterlogged and this will affect the health of plants. When a soil is holding too much water the oxygen supply to the plants’ roots is reduced and if this condition continues over too long a period the plants may die. In hot weather during spring and summer, clay soils can become as hard as rock; because as they dry out, the clay particles shrink, making cultivation almost impossible.

Dig clay soils in early to mid winter (November to mid December) so that frosts can break them down throughout the winter. Frosts will make a heavy soil more crumbly and therefore far easier to cultivate in the spring. You can also make a clay soil more crumbly, and take out most of the stickiness, by applying a top dressing of sharp sand and  horticultural gypsum (sul­phate of lime) immediately after digging. Let it lie on the surface over the winter, during which time it will be washed into the topsoil by rain.

Gypsum can generally be obtained from good gardening DIY shops and Home Depot Centres. Apply Gypsum fairly generously each year, at a rate of about 500g-1kg per sq m (1-2 lb. per sq yd.).

Hydrated lime has a similar effect to gypsum. Again it can be applied as a top dressing after digging. Apply it as evenly as possible. Generally an application every two or three years is adequate for most crops.

It is interesting to note that, though gypsum improves the soil without raising the pH level (increasing alkalinity), hydrated lime raises the pH as well. Both cause flocculation (create a good crumb structure), thus improving the soil tex­ture, drainage and aeration. 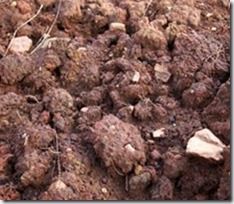 During the actual digging, incorporate as much organic matter as possible to ‘open up’ the soil and to prevent it forming into large clods. This should give better drainage of surplus water and improve aeration. There are various types of organic matter that are suitable, such as well-rotted farmyard or horse manure, garden compost, peat, leaf mould, spent hops, bracken, straw, composted seaweed and composted sawdust. Try to apply at least one barrow load per square metre or yard. It is best to double dig clay soil as this will enable you to get the organic matter down into the lower soil. When double digging remember to keep the soil in its proper layers; in other words, never mix topsoil with subsoil.

Do not apply lime and manure at the same time, but leave an interval of two or three months between applications. If you are digging in organic material in the autumn, then scatter the lime over the soil surface in early spring.

Spring is also the time to apply a general-purpose fertilizer prior to sowing and planting. It is not much use applying this in the autumn or winter, as most of the plant foods will have been washed too far down in the soil to be of use to the plants when they are needed.

Sandy soils are the opposite of clays. They are generally known as ‘light’ soils because they are easy to work. Sand has a gritty texture, consisting mostly of grains of silica that are chemically stable. So, unlike clays, the soil particles do not stick together and the soils are very loose in structure.

Because of this loose structure, sandy soils are incapable of holding much water. They warm up quickly in spring, but during dry weather they can dry out very rapidly and cause plants to wilt or die through lack of moisture. Again, because of their loose structure and chemical stability, sandy soils cannot hold much plant food and are therefore said to be ‘hungry’ soils.

It is not necessary to dig sandy soils as early as heavy clay types, but even so, digging should still be completed well before sowing and planting time in the spring. Ordinary single digging to the depth of a spade should be sufficient.

However, in some sandy soils, an iron pan can form in the lower soil that may be impermeable to air and moisture, and therefore harmful to plants in that it prevents surplus water draining away. An iron pan is a rock-hard layer of soil that, as the name implies, contains a large quantity of iron. Sandy soils naturally contain a large amount of this element that, over the years, is leached (by rain) into the lower soil where it cements sand particles together. If you discover an iron pan, you would do best to break it up by double digging the site. Thereafter you can carry out ordinary single digging as it will probably be many years before a pan forms again.

The main consideration in improving sandy soils is to incorporate as much organic matter as possible to supply humus. Most sandy soils are seriously lacking in humus and so have a very poor structure, the soil being unable to hold water and plant foods. The humus acts as a sponge and ensures adequate moisture during dry periods. Apply plenty of organic matter every year (provided this ties in with the cropping programme) for it quickly disappears in this type of soil. Also apply a general-purpose fertilizer in spring, prior to sowing and planting. 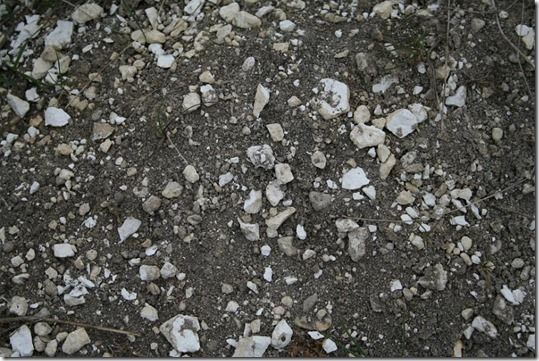 In some respects chalk soils are similar to sands. If you have only a thin layer of soil overlying chalk you will often be faced with lack of moisture during dry weather due to the percolation of water down through the chalk out of reach of plant roots. Such a soil will also be lacking in humus and plant foods. An additional problem with chalk soils is high alkalinity that can cause many plants to show symptoms of chlorosis (dwarfing of the plant and yellowing of the leaves). This occurs because the plants are not obtain­ing sufficient iron from the soil; iron is rendered unavailable to plants in con­ditions of high alkalinity. Roses, many soft and top fruits, hydrangeas and ericaceous plants (such as rhododen­drons, azaleas and heathers, etc.) are prone to chlorosis.

Soils over limestone should be treated as chalk soils; it is often forgotten that chalk is a pure form of limestone.

Chalk soils (especially thin soils overlying solid chalk) need plentiful additions of organic matter; on some types it is almost impossible to apply too much. On such a site you would do best to dig as deeply as possible each year - preferably double digging. This will enable you to get organic matter well down into the soil, so that, over a number of years, you gradually increase the depth of suitable growing soil. Also add organic matter to the topsoil - mix it well in if possible. Any of the kinds of organic matter suggested for clay soils can be used, but very acid materials (such as peat and leaf moulds) are particularly suitable as they help to reduce alkalinity - if only very slightly.

Alkalinity can be reduced by in­corporating flowers of sulphur into the soil, but very large applications are necessary to do any good; you would need to use about 500g-1kg per sq m (1-2 lb. per sq yd.).

As with chalk and sand, apply a general-purpose fertilizer in spring before you begin to sow or plant.