Which gardens are on your list to visit this year? There are so many, some open to the public, some private; some easy to access, some that require planning.

I think most of us have a few well-known gardens on our list of "must see" destinations that remain on that list year after year without us finding the opportunity to visit. It's really difficult to choose just ten from the many diverse gardens in the EU.

However here is my choice that I think should be on everyone's agenda at some point. These are not private hidden gems, they are mostly reasonably easy to access and in some cases you will share the experience with many others. 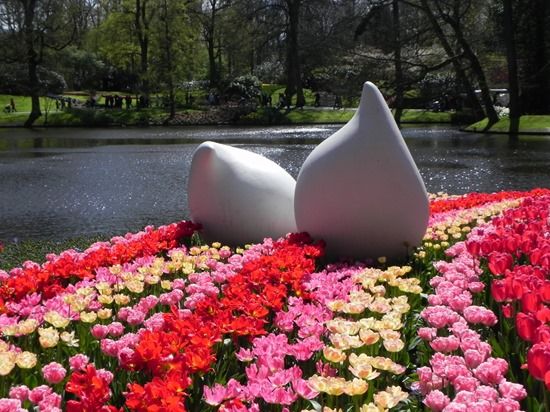 The showcase of the Dutch bulb industry. A colourful spectacle; the definition of painting with plants. Near perfect displays are achieved by planting flower bulbs for continuity and replacing them as necessary.

It is worth noting that all of the bulbs (several million), all seasonal bedding subjects and all turf are replaced annually. A lesson worth heeding.

Despite attempts to extend the season with perennials and summer flowering bulbs the Keukenhof season is mid-March to mid-May, peaking sometime in April.

Expect a lively atmosphere, barrel organs, fountains, smiles and fun. Despite the crowds the flowers rule. One of the three most photographed sights in the world. 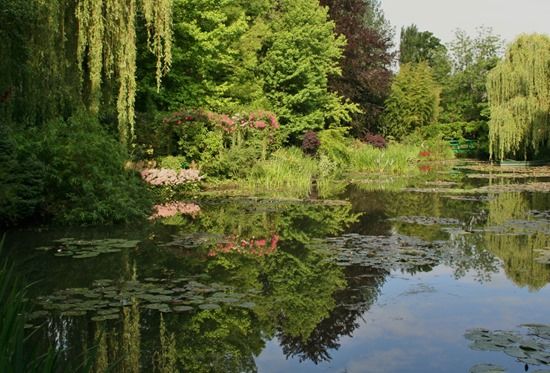 Claude Monet’s garden, and inspiration for a great many of his works, including countless water lily canvasses.

Only two acres and divided by a road (originally a small railway line) it consists of the clos: gravel and narrow beds, and the Japanese water garden. Crowded with tourists and cameras it still has atmosphere.

Don't expect sophisticated planting; in summer masses of bedding plants crammed into the narrow beds maintain the colour. Get on a tour that gets you in early before the crowds.

However remember to stay long enough to see the water lilies; they don't open until the sun is on them. 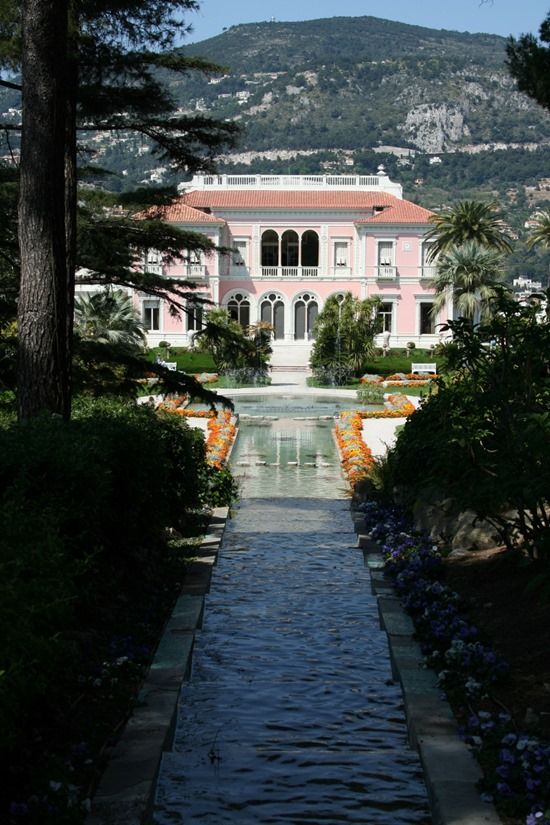 This one, on the glamorous Cap Ferrat, features a variety of garden areas, but the formal gardens with fountains and cascades and wonderful, but rather vulgar bedding displays against the pink and white mansion are the spectacular focus. Immaculate maintenance and detail are to be admired.

If you want to know why the Cupressus sempervirens are so neat and columnar, look how they trim them. Neighbouring properties are owned by the world's rich list. Enjoy the neighbourhood! 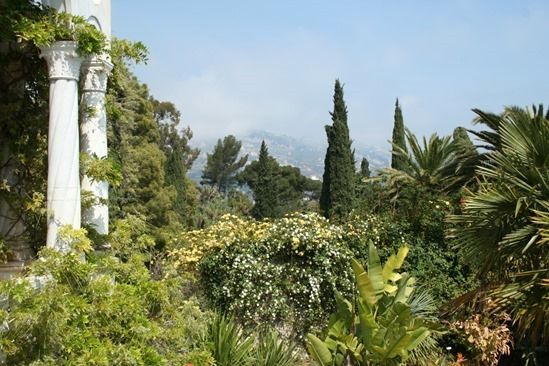 This garden is just over the French border into Italy. Superb coastal location terraces plunge towards the sea from the Romantic Villa. If, like me, you fell in love with the film ' The Enchanted April' this will be one of your favourite gardens.

Palms carry the battle scars of World War 2 and every stone tells a story. The Italians are quite serious about its botanical importance, yes, there are some impressive plants but you will just be absorbed by the setting and the atmosphere.

Don't get too relaxed in the cafe at the bottom of the garden, it is quite an uphill walk back to the top. 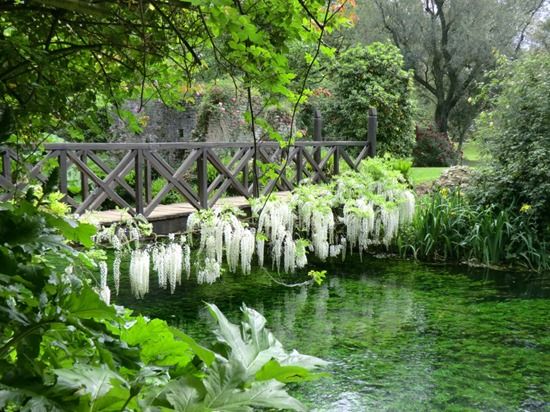 At Lazio, just south of Rome, Ninfa is one of the less accessible gardens that is best visited with a group. This is a garden of sublime romantic beauty where time seems to stand still.

Roses, jasmine and wisterias ramble and climb through the ancient medieval ruins of the city of Ninfa. A glorious Arcadian landscape created by three women over ninety years.

The river that flows through the garden creates a microclimate enabling many rare and exotic plants to thrive. 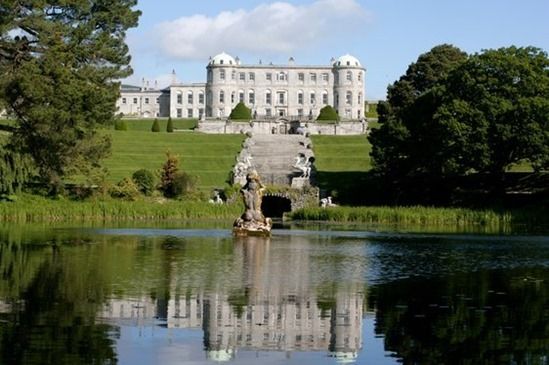 Some will raise their eyebrows at this one. Powerscourt estate was once a grand garden surrounding a substantial castle.

After years of neglect it was restored and is now a popular tourist attraction with hotel, restaurants, golf course, shops and the related paraphernalia.

This probably eclipses its importance as a magnificent grand garden. Definitely worth a visit to enjoy the Japanese garden, walled gardens, rose garden, formal gardens and the surrounding landscape.

The scale is big, is allow plenty of time to wander and explore. Another garden of the past that is enjoyed by the people of today. 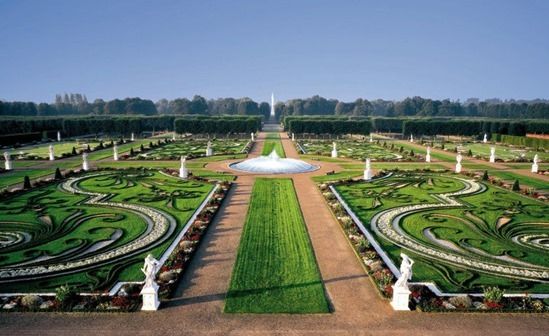 Located in Hanover the Herrenhausen gardens consist of the Great Garden and the Berggarten or mountain garden.

The Great Garden is a Baroque masterpiece, legacy of the Kings of Hanover and Sophia of Hanover who commissioned a French designer to lay out the 50 hectares of hedges, walkways, statues and avenues in strict geometric patterns.

Wander and wonder at the sheer scale and majesty of it all. The Berggarten was a vegetable garden (on a grand scale) which has evolved into a Botanic garden. The Herrenhausen palace was the centrepiece but this did not survive World War 2.

Today the gardens are a people’s playground and demonstrate how a great garden can change use through the ages, but still survive and flourish. 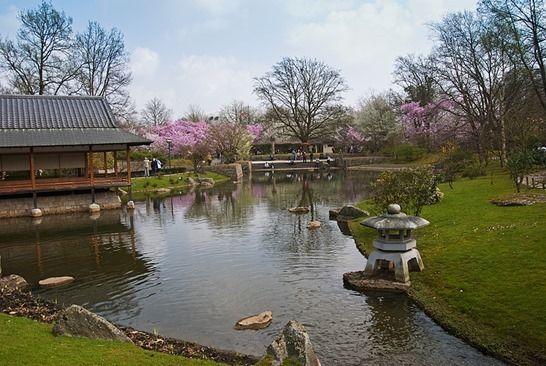 Hasselt is home to the largest Japanese garden in Europe. It was laid out from 1985 to 1992, so is fairly recent but is based on a 17th century model.

Covering 6 acres it is a calming picture of water, rocks, stones, maples, toru and tea houses. 250 Japanese cherries are a spectacular sight when the garden opens in April each year.

The month of October, before the garden closes for winter is also a good time to visit to enjoy the autumn colour. Various events relating to Japanese culture take place in the garden during the year. 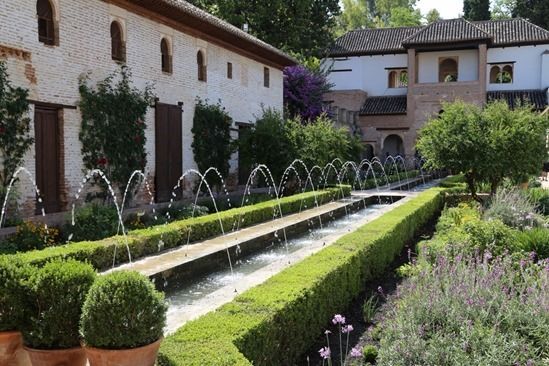 The Alhambra palace and the neighbouring Generalife palace are located on the outskirts of Granada in the Southern Spain against the backdrop of the Sierra Nevada.

The gardens are an intrinsic part of the living area of both palaces: shaded and sun drenched courtyards, rills and fountains, hedges, palms and citrus.

Probably one of the most romantic garden settings in the world. Separate yourself from other visitors and drift back through the centuries: imagine the carpets, cushions, silks, jewels and intrigue which would have added another dimension to the already intricate picture. 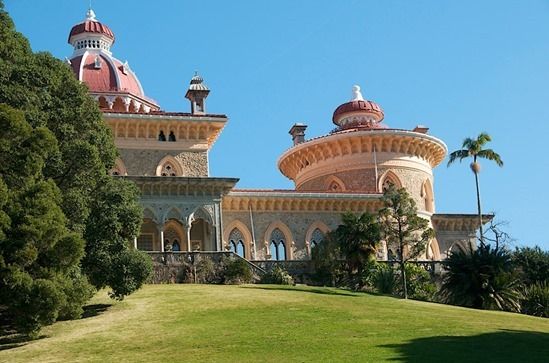 Located high above Lisbon at Sintra this romantic Moorish palace is surrounded by a picturesque park with falls, ruins and hidden paths. An Englishman, Sir Francis Cook bough the park in the 1850s and set about creating a plantsman’s world tour.

Today you will find mature tree ferns, gums and many rare subjects basking in the high humidity caused by frequent cloud cover. Visit when the palace is not being used for events and get lost in the romantic landscape of hidden gems.

Years of neglect (now recued) have given the garden a special atmosphere. The sweeping lawns in front of the palace were the first lawns in Portugal; still some of the finest.