Urban Gardening in New York and A Visit to The Highline

I think there is a good reason why New York is leading the world in terms of Urban Gardening.  In fact there are probably several.  One is that, as cities go, New York has not traditionally had the diversity of ‘green’ in it, compared to others.  And in difficult economic and social times, humans crave the safety and comfort of the natural world. 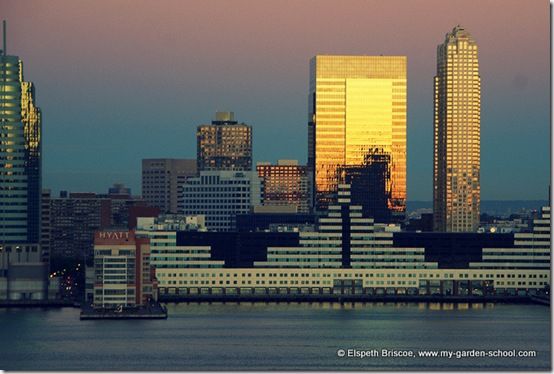 I think if you asked them a few decades ago, New Yorkers (and its nomadic visitor population) – would have envied the tree lined streets of London, the parks of Chicago, the fountains of  Milan and the stylish window boxes of Paris.  Aside from pockets such as Central Park, New York was largely developed as a pure urban metropolis during the 70s and 80s.  But it craved green as attitudes and the city’s experiences evolved.   And over the last decade or so, its sneaked up on us to lead the charge that’s sweeping the world in urban gardening and regeneration.  The skyline of New York is changing radically.  And definitely for the better. 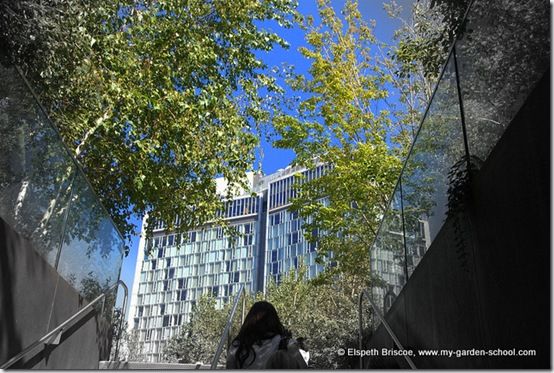 Over the weekend I was intrigued to explore the High Line – billed as one of the most successful urban revitalization projects in the world. I decided to take a walk around and visit the much talked of sky garden, and also just spend a few hours looking up.   Simply looking at the top of the buildings to get an understanding of the scale of urban gardening in the heart of this famous city. 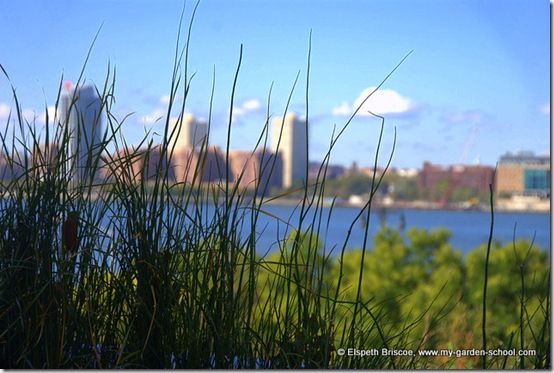 The High Line is a public park built on an historic freight rail line elevated above the streets on Manhattan’s West Side. It is owned by the City of New York, and maintained and operated by Friends of the High Line. Founded in 1999 by community residents, 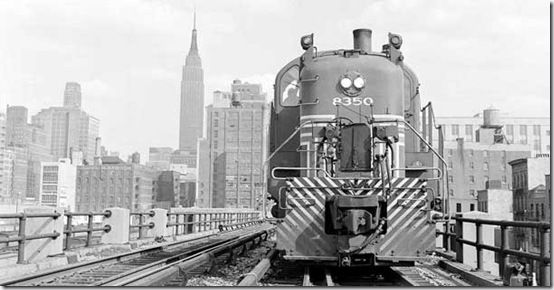 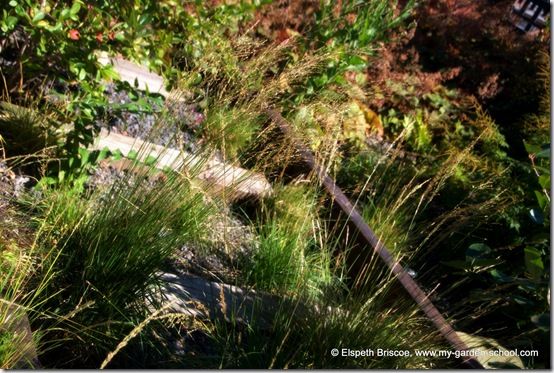 Friends of the High Line fought for the High Line’s preservation and transformation at a time when the historic structure was under the threat of demolition. It is now the nonprofit conservancy working with the New York City Department of Parks & Recreation to make sure the High Line is maintained as an extraordinary public space for all visitors to enjoy. 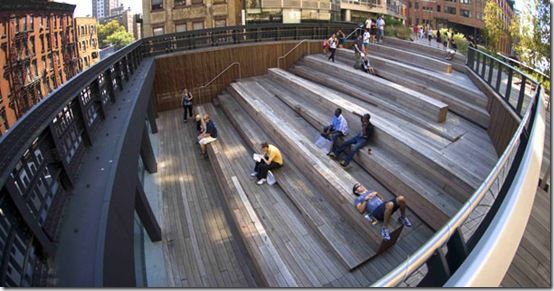 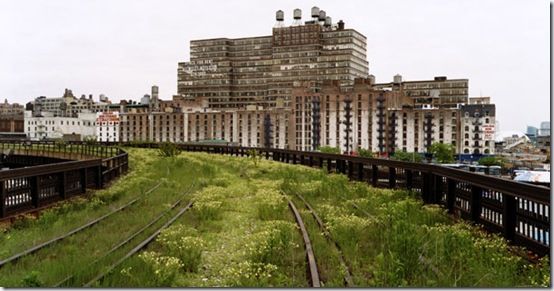 In addition to overseeing maintenance, operations, and public programming for the park, Friends of the High Line works to raise the essential private funds to support more than 90 percent of the park’s annual operating budget, and to advocate for the preservation and transformation of the High Line at the Rail Yards, the third and final section of the historic structure, which runs between West 30th and West 34th Streets. 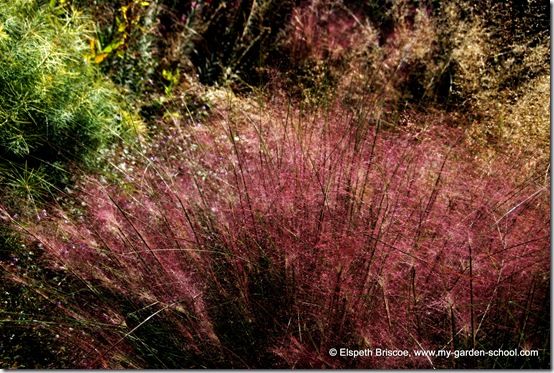 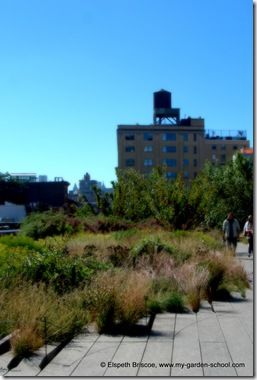 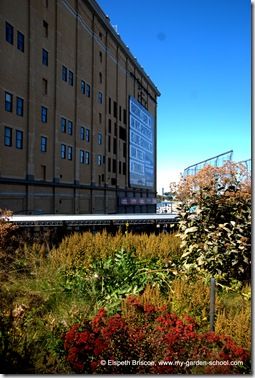 It does pain me to say this a little, and whilst The High Line was undoubtedly groundbreaking, spectacular and it is indeed a world leading regeneration project – I did have slight disappointments.  I will caveat these with 1) I clearly didn’t go at the best time of year and 2) I went at midday – it was crowded, and a terrible time for photography due to very bright sunlight.  So caveats aside – I felt a little cheated on the planting. 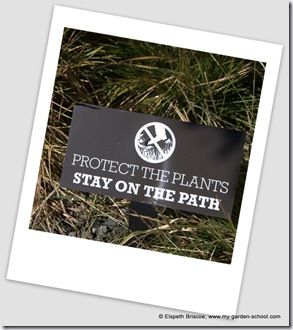 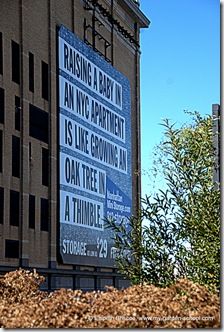 I’m sorry about this – as I do totally love the revolutionary planting of Piet Oudolf.  Oudolf’s planting at Pensthorpe, Norfolk, blew me away (and in fact I saw it in winter).  And for three years I admired his planting at Southbank in London every day near where I lived.  But the section of The High Line I saw just looked like tired grass planting that had gone over.  I don’t want to dwell on this – as it is a truly amazing project.  But there are times of the year when grass planting, especially if there aren’t vast acres of it, can look tired.  That’s my only criticism.  And I unhelpfully, I don’t have any recommendations on how this can be improved. 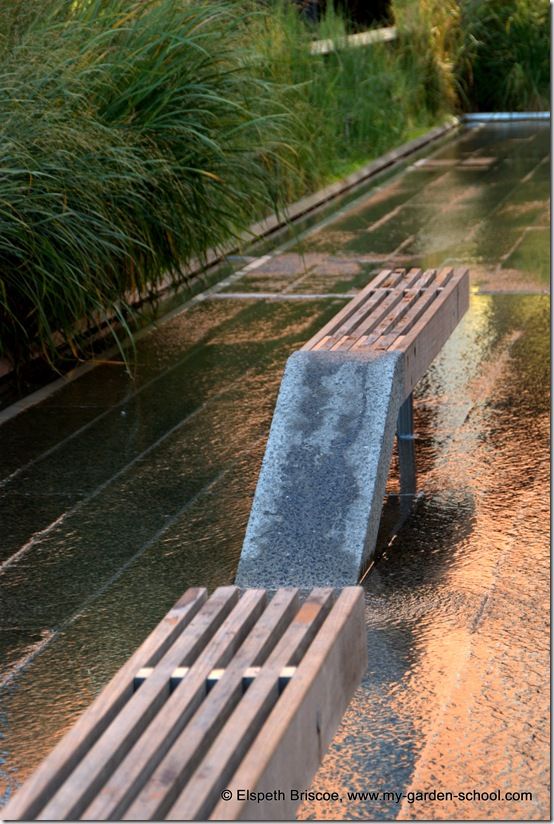 So let’s move on.  Impressive points about The High Line were – the setting, the views, the concept and just the pure execution of having something regenerated and green right in the heart of one of the world’s greatest cities.  It’s absolutely worth a visit if you are in New York.  And I believe it stands for the tidal wave of change that’s hit New York in terms of urban gardening, regeneration and being on the path to being one of the most environmentally aware cities in the world.

For more information on The High Line New York
Check out their website here:  http://www.thehighline.org/
For a more detailed, possibly less subjective view on The  High Line and Piet Oudolf’s planting – check out this article on Thinkingardens by James Golden