It is interesting that gardeners seem to hate plants that succeed too easily. Even if they are good, reliable ornamentals, the fact that they thrive in spite of us is seen as a drawback. We also think we should dislike plants that are considered old-fashioned. The pampas grass may be a child of the ‘70s but it certainly has a long season of interest! We love the idea of groundcover plants that smother bare soil and overcome the need to weed, but we hate anything that seeds and spreads. What we most desire is what we really shouldn’t grow: things like meconopsis and gentians, or rhododendrons when we garden on shallow chalk. 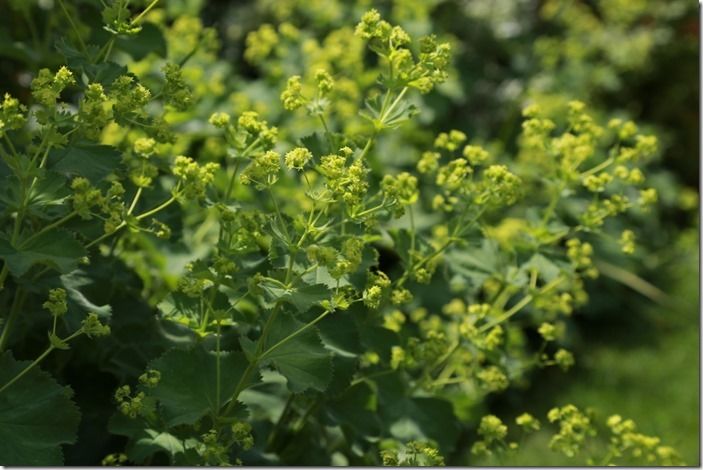 Lady’s mantle, Alchemilla mollis is a great example of an excellent garden plant that gardeners complain about. Sure, it seeds and spreads. Mainly because we let it. If we cut it back as soon as the flowers start to fade it can be kept in check, but we forget and consequently seedlings emerge anywhere they can avoid disturbance. Planted under the hedge or under mature shrubs or trees alchemilla can survive where lesser plants wither and perish. Make the most of it. 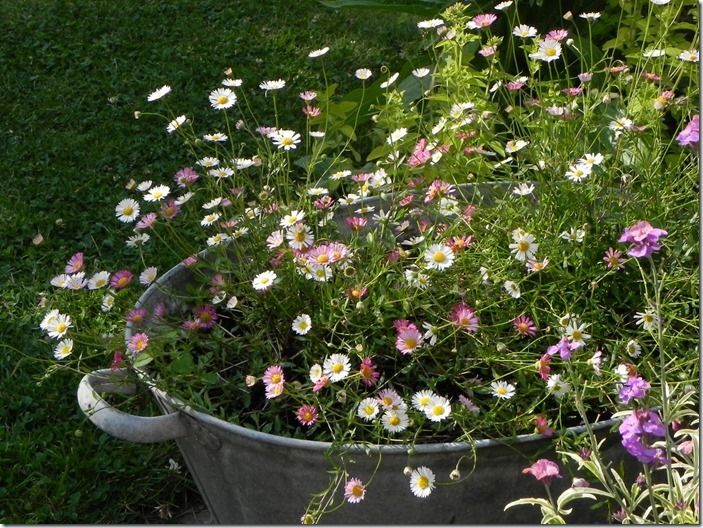 The looks of the fleabane, Erigeron karvinskianus belie its tough resilience. With similar habits to alchemilla it is altogether lighter and more delicate in habit. The tiny pink and white delicate flowers cannot fail to charm, as much as we complain about its invasive tendencies. In a previous post I recommended this as plant that survives dry shade. I stand by that from experience, despite the fact it is usually grown in sunny, dry conditions. 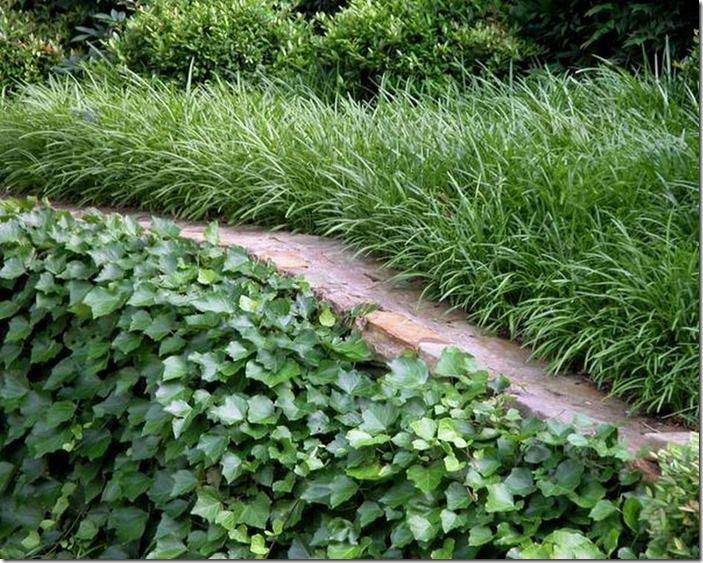 Top of the garden enemies has to be ivy. Seen as a thug that strangles trees its qualities are overlooked. Shade tolerant, evergreen, versatile either as self-clinging climber or the perfect groundcover it has a lot to offer. Not least of all a valuable source of nectar and pollen and berries as food for birds. The large-leaved hederas are particularly good as ground cover under trees. Their leaves are reflective and lighten shade. Some complain that it can take over; my advice is don’t let it, control it. 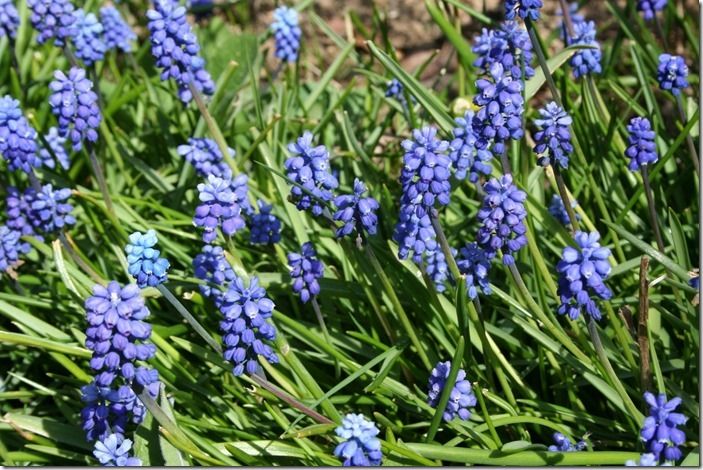 The same is true of the grape hyacinth, Muscari armeniacum. Sapphire spring flowers, loved by early bees. Fragrant and delightful for cutting. If the green seed-pods are left to mature and dry they split releasing black seeds which spread the plants far and wide. Shear off the seed heads when the flowers fade and you won’t have that problem. I like to dig up a few in early spring as the buds start to emerge. I pop them into a shallow opt and bring them indoors to enjoy in the house. 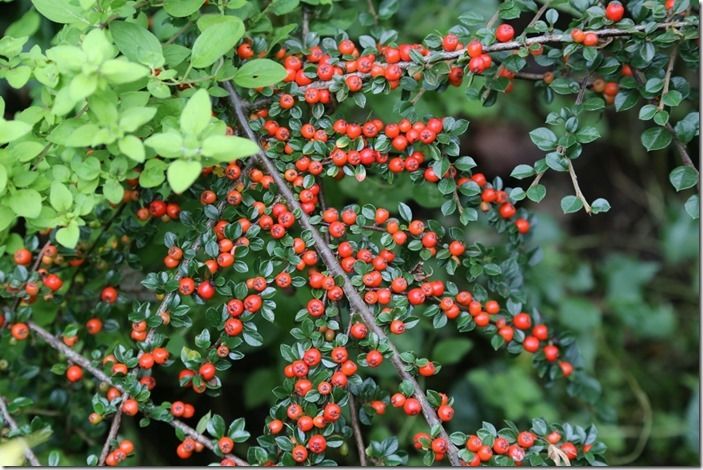 I don’t remember folks complaining about grape hyacinths when I was a lad. In those days the variety of garden plants was so much smaller. When you had a lot of something you passed some on to friends and neighbours; a much more likely way of filling a garden than going out and buying everything from a garden centre. At that time the herringbone cotoneaster, Cotoneaster horizontalis was one of the most popular subjects to grow against a wall or fence. With its sealing-wax red berries and bright autumn leaf colour it presented a cheerful, easy to grow picture. Today we value it just as much for its small, white early flowers which the bees love. But recently we’ve stripped it of its Award of Garden Merit and classified it as invasive. However doing that does not negate its value to wildlife so don’t remove tours yet! 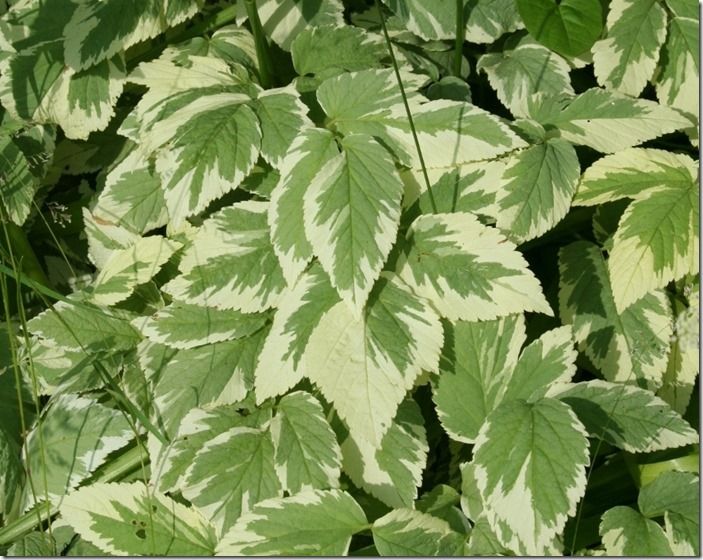 Ground elder, Aegopodium podagraria strikes fear into any gardener. It spreads, seeds and we spend most of our weedkiller budget attempting to get rid of it. Maybe you wouldn’t want to grow it, but the variegated form might convince you otherwise. With its soft-green and cream variegated leaves it makes a wonderful edging plant or it’s great in a pot. The neighbours might think you are nut growing ground elder but you will grow to love it. 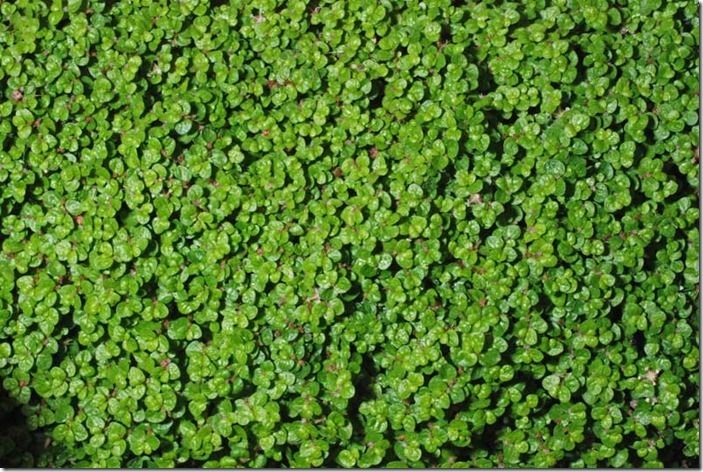 Mind-your-own-business was a source of amusement for its rather naughty name. Correctly helxine originally it has become Soleirolia soleirolii just to confuse us all. Tiny shining apple green leaves on fine, filament stems make a tight mound which becomes spreading as the plant matures. It then breaks out to invade lawn and flowerbeds and fill gaps in paving: anywhere it can get a grip of the ground. It loves shade and moist conditions. You might hate it for its invasiveness or you may curse it for its vibrant health and colour where grass fails to grow. 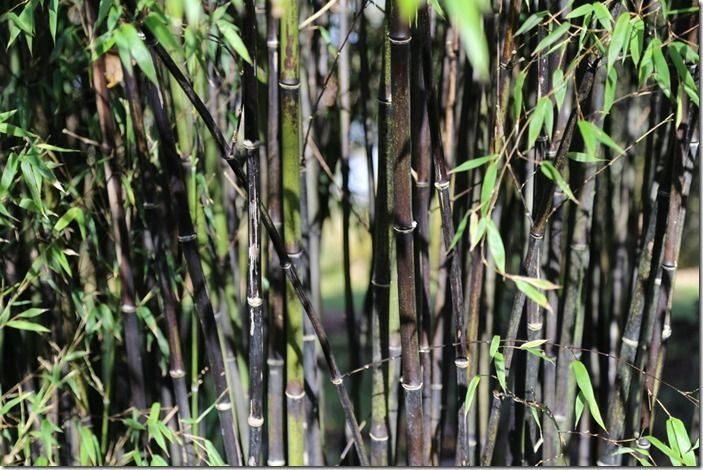 Last but not least I just had to include bamboo. The picture is Phyllostachys nigra, one of the most desirable for its fabulous canes which are almost black when grown with adequate light. This one is a clump forming bamboo, so should stay in one place and not invade the entire garden. However when established it may encroach further than expected. In my experience the bamboos fit in to both ends of the spectrum: the most desirable and most loathed. The discerning seek them out, treasure then and then spend the rest of their lives trying to get rid of them.