Many of us head off on vacation to warmer climes at some point during the year. Some reading this will live permanently in warm, sunny regions where frost just doesn’t exist. Wherever that is in the world there are certain plants that feature in gardens, planting schemes and are sometimes naturalised in native habitats. These are those sun loving shrubs and climbers which are such a delight for all of us that hail from cooler regions. This is where Mediterranean meets sub-tropical: bright flowers; lush foliage. 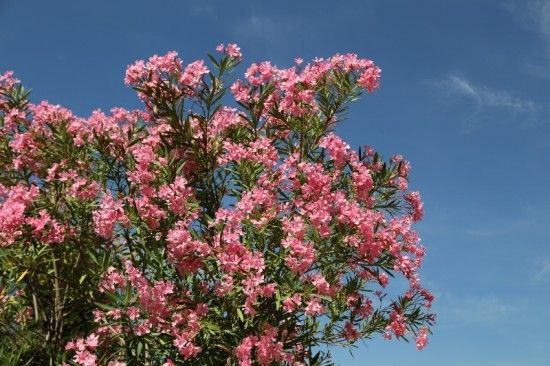 Perhaps the most widely spread of all is oleander, Nerium oleander. This vigorous shrub with long leathery leaves and straight stems is so widely distributed in the world there is confusion over its country of origin. It probably hails from SE Asia but is found across all continents in parks and gardens, holiday complexes, roadsides, commercial developments and it is also widely naturalised in the wild. On a recent visit to Turkey I noticed it clothing river banks for many miles. The plant is poisonous which makes its widespread use somewhat surprising and the sap can be irritant. It is however nonetheless attractive and flowers freely producing single or double blooms from white to deep crimson-red. 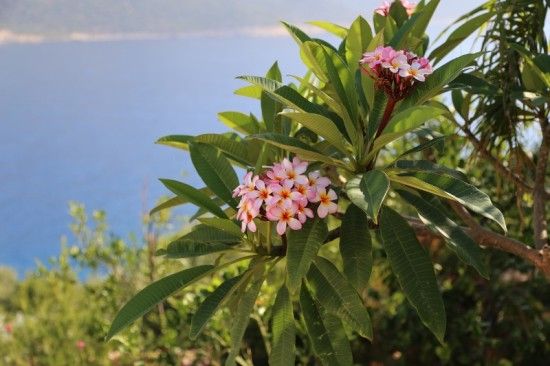 Frangipani, Plumeria rubra is closely related to oleander and has similarly irritant sap, rather like euphorbia. The flowers are wonderfully fragrant to attract the moths that pollinate them, however they contain no nectar so their fragrance is trickery. In some cultures frangipani is associated with ghosts, graveyards and death, however it is probably best known as the flower used to make leis. These are the garlands worn in some Pacific islands. Frangipani is often sold for indoor culture as cigar-like cuttings which will eventually produce a rosette of leaves and hopefully a cluster of flowers. It is not as cold tolerant as oleander and is more commonly seen in the southern Mediterranean and Caribbean. 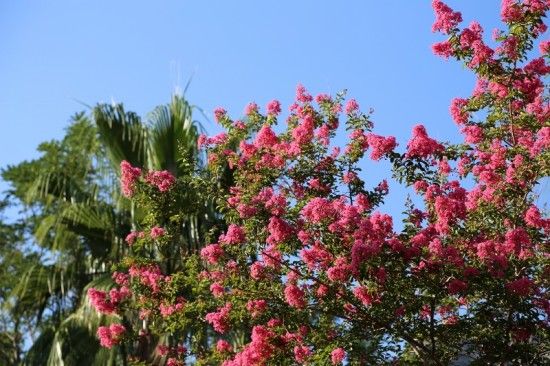 The crepe myrtle, Lagerstoemia indica is tougher. This beautiful evergreen shrub or small tree is sometimes grown as a street tree and is spectacular when in full bloom. The crinkled blooms in lilac-like panicles may be anything from white to crimson and bloom for a long period through summer. Lagerstroemias will often survive in mild areas in temperate regions and are ideal in large pots which can be protected in winter and stood outside for summer. 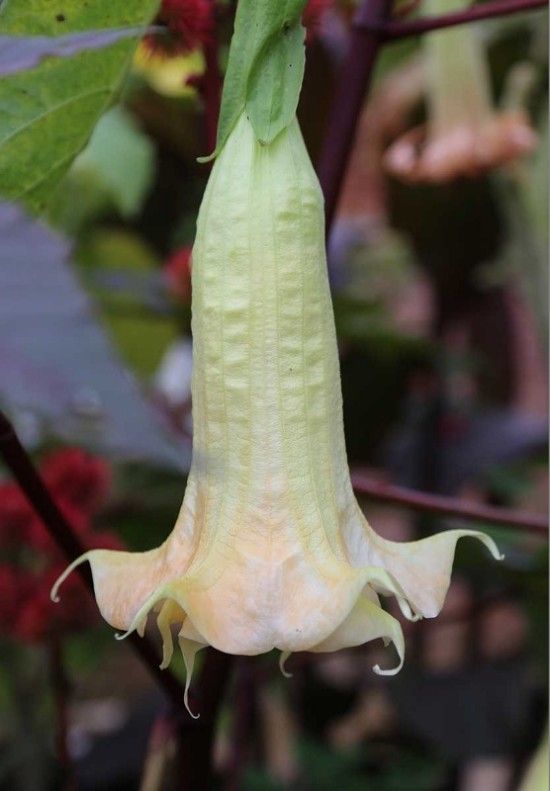 The same could be said of brugmansia, angel’s trumpet. This was previously called datura and there are a number of species. Brugmansia suaveolens has superb hanging trumpet flowers which are richly fragrant. The species is white but there are a number of cultivars with trumpets of buff, pale god, pink and salmon. Natives of South America, brugmansias are toxic and contains alkaloids that are hallucinogens.  They are used by some natives to induce trance as a way of contacting ancestors.  The fragrance is reputedly narcotic. Folklore says that if you sleep under a brugmansia tree you never wake up, because of the effects of the narcotic fragrance. The angels come to get you: hence the common name.

In temperate regions brugmansias have an annoying habit of blooming right at the end of the season. In warmer climates they flower throughout summer. 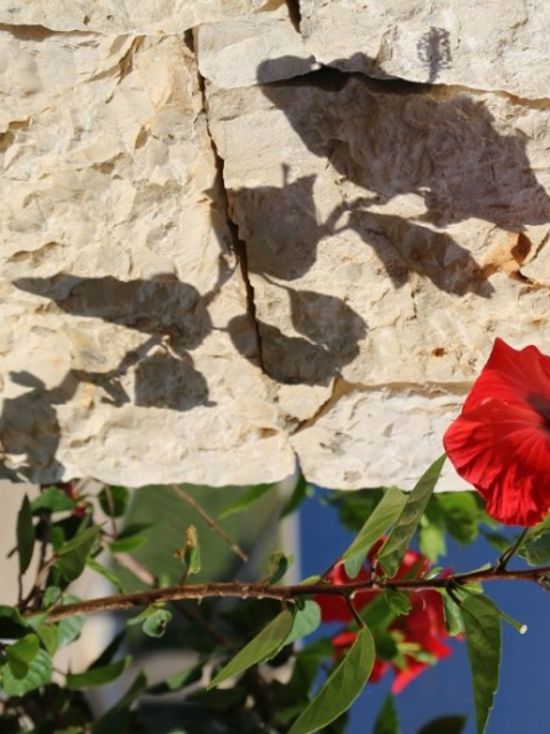 The lovely rose mallow, Chinese hibiscus, Hibiscus rosa – sinensis is an evergreen shrub with spectacular blooms with prominent stigma and stamens.  It is the national flower of Malaya but is grown throughout the world as either an ornamental shrub or a pot plant.  It does seem to survive lower temperatures, above freezing by shedding its leaves. It needs plenty of sun to thrive and bloom well. Few plants possess such vibrant flowers as the species with its shining scarlet petals. 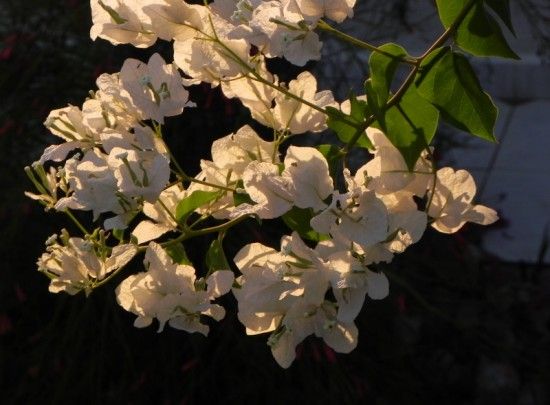 Although bougainvilleas are natives of South America they appear across the world draping houses, fences and walls with their colourful bracts. Some are bushy and thorny, others are vigorous vines. The flowers are small and tubular in threes, surrounded by three papery bracts; the showy part of the flower structure. The colours are stunning: from white through pale pink and lilac to day-glow cerise and purple. Terracotta. Ochre and orange forms also occur. They are not frost hardy; in the US Zones 9b and 10 but they are widely used as conservatory and summer patio plants. If kept dry in winter they cope with lower temperatures but need warmth and sun to get them going in the growing season. 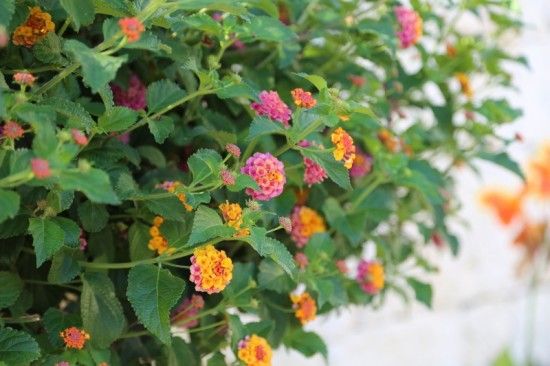 Lantana, Spanish flag is another shrub with vibrantly coloured flowers. The heads of tiny blooms are usually consist of two colours because the flower colour changes as the blooms mature. Typically a flower head will be yellow in the centre deepening to orange and red around the outside, hence the common name of Lantana camara. Lantana is widely used as a bedding subject in Mediterranean regions and can grow to large shrub proportions in the tropics. Members of the verbena family lantanas are natives of America and Africa but are widespread throughout the world. They have become invasive weeds in some areas including the SE USA. Birds love the black fleshy seeds and the leaves are toxic to many animals: a certain recipe for a successful invasive weed. 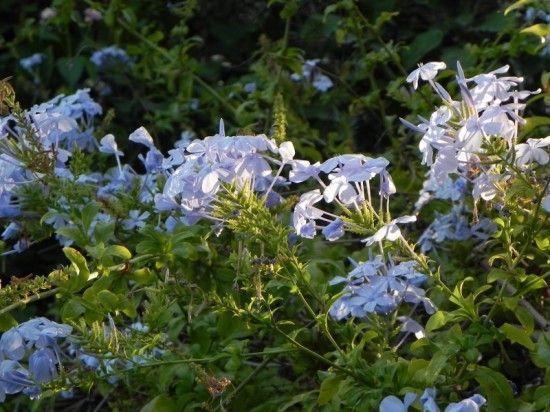 Although there are other species of plumbago the favourite has to be Plumbago auriculata, which I know as Plumbago capensis from South Africa. A sprawling shrub, almost a climber it cascades over walls and terraces and delights with its soft green leaves and clusters of ice blue flowers. In cooler regions it makes a good conservatory plant and is easily raised from seed. I have it in the conservatory where it is untidy, unruly and thoroughly delightful: not a problem if it is hard-pruned from time to time. 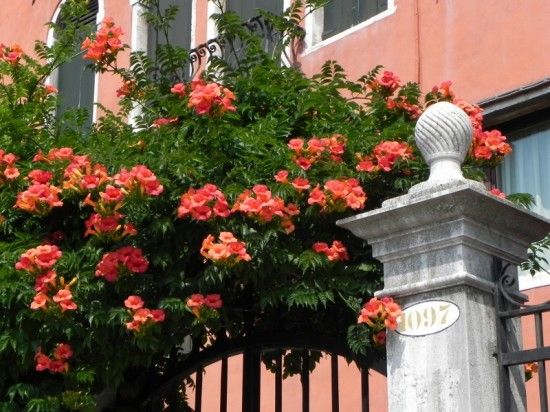 The vigorous climber Campsis radicans, trumpet vine puts on a splendid display by midsummer in Mediterranean countries. Further north it is hardy enough, but rarely blooms before early autumn. The tan coloured stems are partially self-clinging enabling it to scale a high wall or fence. The clusters of trumpet flowers are anything from brick to orange. It does need space: as it flowers at the tips of the shoots any pruning in the growing season removes the flowers. 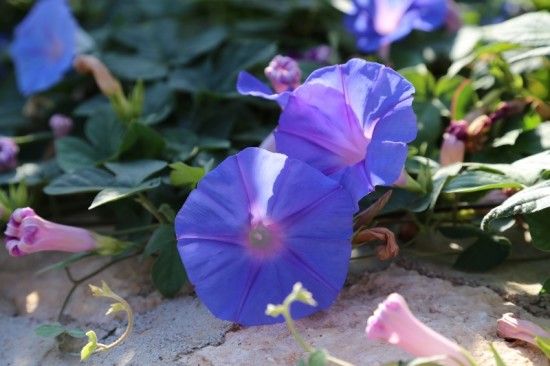 Campsis may be vigorous but it is nothing compared with Ipomoea grandiflora, the perennial blue morning glory. It smothers banks, clambers over walls and twines its way through any available support. Dark green leaves provide the perfect setting for the sapphire blue flowers. I have grown it in the conservatory but its unruly habit made it hard to live with, even if the flower colour is divine. I think it’s at its best carpeting rocky ground or tumbling over the edge of a terrace or steps. Its divine alongside scarlet and orange lantanas.