Gathering wild ingredients is not only a way to bag delicious flavours for free, it is also a mindful pursuit that opens your eyes to the delicious, edible opportunities the landscape has to offer. Below are five wild foods worth knowing. To broaden your horizons further, check out John Wright’s online Foraging and Feasting course (link below).

How to find and forage the ingredients for Hugh’s wild pakoras with water mint raita.

A delicious and accessible wild food, hogweed tastes somewhere between parsley and celery. Once cut, it quickly grows back again and is super common plant.

Common name: Hogweed, Cow Parsnip (not to be confused with cow parsley).

How to identify:
Seek out tightly curled and pale green shoots that open out into large dark green roughly lobed, matt leaves covered in tiny hairs.

The sheathed bud at the base of a hogweed leaf opens out into a large white umbel made up of many tiny flowers. (Umbel means it’s shaped like an umbrella). The stem is green to dark red/brown/purple and is thick, hollow and covered in small hairs.

Taste: The shoots are best blanched and cooked in butter, the leaves can be used when very young or as a flavouring for soups and stews, the flower buds can be used like broccoli, the seeds are a direct replacement for cardamom and the roots can be used like parsnips but must be boiled well.

Where to find it: Wood edges, beside paths, roadside verges and many other environments.

Possible confusion:
Be careful not to mistake Common Hogweed for Giant Hogweed which is very dangerous. Giant hogweed has a phototoxic sap which will burn your skin extremely badly if exposed to the Sun. This is no idle warning, if you want to see how bad the burns can get a simple google search should do the trick. Giant hogweed has shinier leaves, more hair in a ring around the stem at the leaf joints, as well as more flower stems. It’s also much larger when mature, growing up to 4 to 5 metres tall, common hogweed is normally around 2 metres or less.

How to harvest:
Only the young leaves should be eaten before they open out fully. Gloves should be worn as a few people can find they get an allergic skin reaction when in regular contact with the sap rather like Giant Hogweed but nowhere near as severe.

A brilliant garlicky swap or alternative to wild garlic, Jack-by-the-hedge is also known as hedge mustard. A brassica, it has a hint of cabbagyness.

How to identify:
Jack-by-the-hedge is biennial. In its first year's growth the leaves grow in a small, ground level rosette with broad heart shaped leaves. As it comes into its second year, a spike grows from the rosette and the leaves are more arrow head shaped with serrated edges. At the top of the plant, you’ll find groups of tiny, white, four petalled flowers. It has a distinctive garlic smell when crushed.

Taste: Jack-by-the-hedge is mildly garlicy with a hint of mustard.

Where to find it: Hedgerows, woodland, shady scrub land and path edges.

Possible confusion:
Once the flowers are out it is difficult to confuse with much else, the smell helps.

How to harvest:
The young first year's leaves or from the top of the plant in its second year are best and along with the flowers and flower buds help make an attractive and tasty salad. The seeds can be used as mustard. The roots at the end of the second years' growth taste like mild horseradish.

Pignuts can be mistaken for the deadly poisonous hemlock so inspect the little white flowers with caution but once you’ve nailed the identification (tips below!) and have permission to dive beneath for the nutty, water chestnut-like tuber below, you’ll be rewarded with one of the greatest foraging experiences.

How to identify:
Pignuts have delicate, fine, green carrot like leaves and small umbrella-like clusters of white flowers. It has a thin, tapering root which, if successfully followed to the end, will provide the swollen tuber or pig nut.

Taste: The ‘nut’ itself tastes a little like a sweet chestnut or hazelnut crossed with a radish but sometimes the taste can be quite mild.

Where to find it: Mixed woodland, hedge banks and field edges and meadows.

Possible confusion:
The feather-like fronds of the young plant are fairly distinctive, though Fool’s Parsley is not too dissimilar and may cause confusion. Fool’s Parsley tends to grow as a weed of cultivation – vegetable gardens being its preferred habitat. Also, make sure the tuber is joined to the root to rule out confusion with poisonous species like bluebell or snowdrop bulbs.

How to harvest:
You’ll need permission from the land owner before collecting the ‘nuts’ of this foraged delicacy. The root must be carefully followed to find the nut at the end, it has a habit of bending 90 degrees before the nut and snaps off very easily causing you to widen your search. A fork could be used to harvest many nuts at a time but great care must be taken not to confuse the tuber with any other like the poisonous bluebell or lesser celandine tubers, which shouldn’t be eaten raw. Pignuts take a few years to grow and produce a tuber so they should only be picked when found in profusion and many should be left behind for the following years.

If you’re attempting self-sufficiency, wild garlic is the answer for anyone wanting to add an allium element to their cooking in the early spring when homegrown garlic stores are starting to wane. It’s distinctive garlic scent makes it an easy, unmistakable leaf to forage.

How to identify:
Wild garlic has long, broadly lanceolate, green leaves with a single main vein, although when young the leaves are narrower. As the weather warms, globe shaped groups of tiny white flowers begin to form on the end of the stem.

Where to find it: Damp, acidic, deciduous woodland particularly near to streams and damp ditches.

Possible Confusion:
With its pungent smell it’s very hard to confuse this plant with anything else although it does look like Lily of the Valley, which is poisonous but does not smell of garlic. The main thing to look out for when collecting wild garlic is not to grab handfuls of the stuff but to gather each leaf individually, as Arum not only looks a similar when young but also grows in the same environment, also other nasty plants to avoid may be lurking amongst the wild garlic.

How to harvest:
The whole plant can be used raw or cooked and can usually be found in great swathes making collecting it quick and easy but be careful not to pick up other stray leaves while gathering.

A sweet tasting and large common mint found near or in water or sometimes damp woodland. Water mint hybridises easily with other mints and a cross of water mint and spearmint produces peppermint.

How to identify:
Water mint has ovate leaves with serrated edges. The leaves can be completely green, but some have purple edges and veins. The leaves can also range from hairy to smooth. As the weather warms, it’ll produce pink to lilac clusters of tiny flowers on the stem where the leaves join and one terminal cluster at the top of the stem. The stems are square and can range in colour from green to purple. Water mint has a distinctly minty fragrance once you slightly crush the leaves.

Where to find it: Slow moving fresh water or ponds and lakes or sometimes damp woodland or boggy fields.

Possible confusion:
The smell is your best identification for finding members of the mint family. Water mint can usually be identified by being in or near water.

How to harvest:
Simply pluck individual leaves directly off the stems or cut a few smaller stems with garden shears or sharp scissors.

A very abundant and under used superfood that is very easy to identify, though perhaps a little painful to collect without gloves.

Taste: Nettles are bit like spinach (but doesn’t wilt down as much), with a really full green vegetal flavour and a hint of nuttiness.

Where to find it: Everywhere! It’s particularly abundant on waste ground, hedgerows, woods and cultivated land.

Possible confusion:
Dead nettles from the Lamium family are really the only thing you’re likely to confuse with common, stinging nettles, but happily, dead nettles are edible – they’re just not as tasty, but the good thing is they don’t sting!

How to harvest:
Only young nettles or bright green tops of larger plants are usable for cooking unless flaming over a fire when more of the nettle can be used. It is not wise to eat nettles when flowering between June and October as they have a laxative effect, and the plant will then contain cystolith crystals which can upset the urinary tract. Wear gloves when collecting or ‘Grasp it like a man of mettle’.

Learn how to Forage & Feast with River Cottage 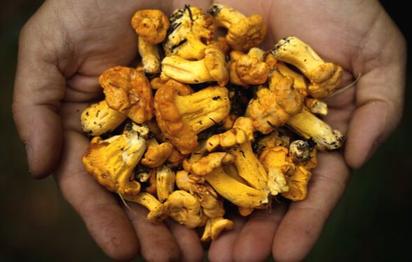 Foraging expert John Wright, author of three River Cottage Handbooks about foraging, will take you on three, real, forays: along the hedgerow, beside the seashore, and to the fields and woods hunting for mushrooms.

These are, indeed, real forays, with all the hopes, disappointments, limitations of season and joys that we must expect when venturing into the wild for our dinner. They all take place in an autumnal Dorset, but the lessons learned here can be applied to other places and other times.

Back to Episode 4
Foraging recipesWild pakoras with water mint raita