How to entice a swarm of bees into your hive

Our bee whisper Matt Somerville is determined to help wild bee populations which are in decline. He likes to be thought of as a rewilder of the honey bee. With his help, we’ve set up two hives to encourage wild bee colonies at River Cottage HQ in Devon.

To entice the wild colonies into the hive, you need:

To attract the swarm:

Start by staking some old honeycomb inside the hive, ideally to the base. Then, drop the lemongrass oil on your cotton bud or pastry brush. Simply rub the oiled cotton bud or pastry bush around the entrance to your hive. Lemongrass essential oil is believed to mimic the pheromone released from the abdominal gland of the scout bees which they use to entice the swarm into an empty hive.

Once we nestled some comb into the hive and applied the lemongrass oil, scout bees arrived within minutes and shortly after the rest of the colony, a huge swarm of as many as 20,000 bees arrived, led by their queen. We now have a happy and healthy colony of wild bees.

When to attract a swarm:

Do this during swarming season, on a calm, dry afternoon. Swarming typically takes place from late April to early June, which is perfectly synchronised with the nectar flow of the surrounding flowers.

Matt Somerville’s approach to encouraging more wild bee colonies is gaining followers largely due to its simplicity as there’s no expensive equipment to buy or complicated rules to follow. Once he’s turned a natural log into a hive and put it in place, as he’s done on our farm, the bees usually find it within days’ and start building a comb.

There’s no need to inspect the hive and there’s no chemical intervention. Surplus honey can be harvested in the autumn but our goal is more about housing wild bee colonies, rather than taking honey. This approach also encourages strong, healthy colonies that are much better at resisting varroa and other viruses.

To find out about buying or building a natural hive, see Bee Kind Hives 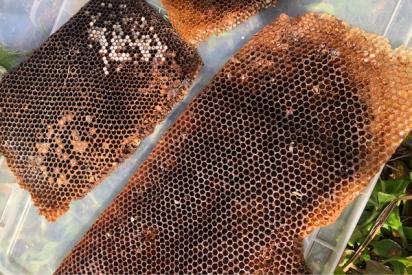 With a combination of hands-on experience, expert guidance and instruction this one-day course will give you the confidence and essentials skills to establish your own bee colony at home plus inspiration and ideas of how to use your honey.

You may know that bees are essential to food production and the environment but may not realise how much pleasure these creatures are to look after. This course will introduce you to the fundamentals of beekeeping and help you to understand the whole process before you commit to keeping bees yourself. Your tutor, Dave Chambers has kept bees for over 30 years and is responsible for looking after the River Cottage hives.