I have always been passionate about orchids. As a schoolboy I managed to grow a few; in a tiny, paraffin heated greenhouse, and on the freezing windowsill of the dining room of my parents’ house; orchid care was challenging! At orchid shows I gazed longingly at expensive phalaenopsis, moth orchids. I could not imagine ever being able to afford one. I certainly could not imagine that forty years later they would be our most popular houseplants, surviving in just about every home in the land. I would never have thought that I would be able to buy a phalaenopsis from a supermarket, for less than the price of a coffee and a slice of cake.

At that time, back in the 1970s, cymbidiums were the orchids grown by a few keen gardeners. These coped with cooler conditions, and they were more readily available because they were grown for the cut flower market. The early cymbidiums were big, ungainly plants with long strappy leaves, up to a metre in height with large flower spikes. Breeders gradually produced more compact manageable varieties that were easier for the amateur grower to accommodate.

Slipper orchids, then known as cypripediums, now pahiopedilums, were also grown but never popular, because they were not regarded as pretty enough. Few other hybrid orchids were seen, but some species, of oncidium, coelogne, and dendrobium were sought after by enthusiasts. These were often still wild collected, and were advertised on their arrival in the country by the more serious gardening magazines. 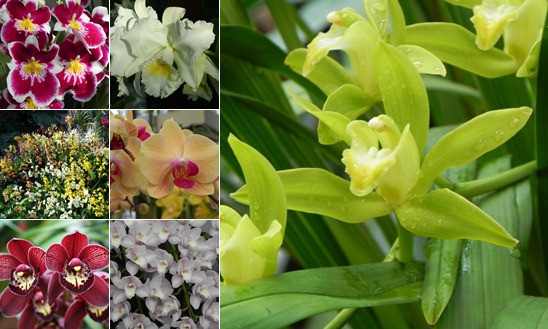 Warmer homes, central heating, and new propagation techniques responsible for large scale production contributed to the popularity of phalaenopsis, moth orchids. The flowers are long lasting, and the plants are remarkably resilient to ill treatment, making orchid care easier. Those that give a plant a little attention manage to get their orchid to rebloom again and again What’s the secret of success? Simple: plenty of light, especially in winter. Water regularly; about once a week giving the compost a good drenching, and the allowing it to drain before returning the plant to its pot cover. Occasional feeding with an orchid fertiliser helps, but it is not essential part of orchid care. When the flowers fade, cut back the flower stem to two nodes above the leaves. Often a new flower stem emerges from here, if not it will eventually appear from between the leaves. The roots have a mind of their own and love to sprawl at random, much to the annoyance of the tidy minded owner. This is quite natural because these orchids thrive up in the branches of forest trees and those roots are adapted to taking water and nutrients from the air. Moth orchid care is easy if you follow these simple rules.

So what about those cymbidiums? Unlike phalaenopsis, moth orchids which bloom when they feel like it cymbidiums flower just once a year; in winter or early spring. These are terrestrial orchids, in other words ground dwellers. They have long strappy leaves and swollen structures called pseudobulbs that sit on the surface of the compost. Their function is storage of water and nutrients. Cymbidiums like cool light conditions in the house in winter and they like to be outside in sun or semi-shade in the summer. Keep them in the house or conservatory and enjoy the flowers in winter and spring. Water them regularly allowing the compost to become quite dry before giving them a good soak and letting them drain. When the blooms have faded cut off the flower spike, keep watering and feed occasionally with a soluble orchid fertiliser. In late April or early May put them out on the terrace with in sun or semi-shade and water regularly. By late summer shoots should have started to develop at the base of the plants. Reddish, rounded shoots are the new flower spikes and flattish, pointed green shoots that are the new growths that will form next year’s pseudobulbs.

Bring them indoors at this point and put them in a cool, light position where they can remain throughout the flowering period. Water regularly when the compost is on the dry side. If you want to move them around wait until the flowers open.; moving the plants when in bud results in a muddled arrangement of blooms on the flower spikes. Cymbidiums that fail to bloom have invariably been starved of light.

The cambria orchids enjoy similar conditions to the cymbidiums; cool and light. They need regular watering, allowing the compost to become quite dry between waterings. Perhaps it is best to think of them as somewhere between a cymbidums and phalaenopsis. They will tolerate warmer conditions than cymbidiums but still perform better in a light, airy position rather than a hot room. Keep them indoors in summer in a light position out of direct sunlight and they will bloom for many weeks during the winter months.

The flamboyant cattleya orchids may have an exotic appearance, but they are surprisingly tough. Like many orchids these were considered to prefer really steamy jungle conditions. However they are surprisingly tolerant. If you have visited the island of Madeira it is not unusual to see these wonderful orchids growing on the porches of houses up in the mountains where the nights are distinctly cold. I grow them in a conservatory, along with cymbidiums, oncidiums and other cool growing orchids. The conservatory is north facing; it does have a radiator, but no heat at night apart from a small electric fan heater, and little heat in the daytime. At the time of writing my white cattleya has two magnificent stems of enormously extravagant white flowers; gorgeous!

Now everyone has their tips about orchid care and getting them to rebloom. We’d all love to hear them so share them with us here...........let’s look forward to lots more flowers next year!