The popularity of perennials in contemporary planting schemes is increasingly linked to the movement towards a more naturalistic style of garden making. The highly structured flower borders of twentieth century European gardens have steadily given way to a looser, more informal planting style where complex mixtures of perennials are planted in wide open drifts in which visitors can lose themselves amidst the soothing atmosphere created by their intermingled forms, textures and colours. Ornamental grasses and perennials that are close to the character of their wild parents have replaced the dominating, often double flowered, clumps of perennials that were once so popular.

Enthusiastic designers repeatedly make reference to the structural and textural qualities perennials can bring to your garden planting schemes, but in truth perennials are weak architecturally and to be effective within a garden’s design they need to be placed within a firm framework. 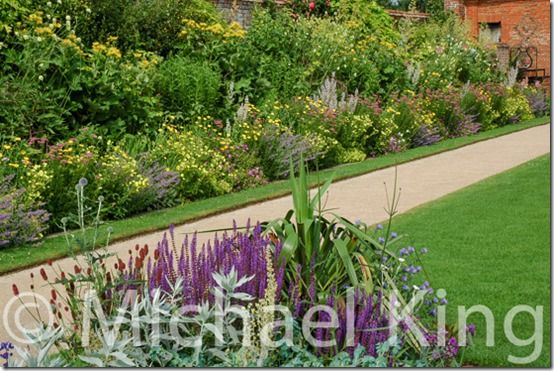 Traditionally, herbaceous borders were created as discrete features; often backed by tall hedges and viewed as a tableau with their plants arranged in serried ranks. The new style of planting which flows out to fill wide garden spaces into which we can enter, run the danger of becoming loose and formless, filled with a tangle of vegetation. 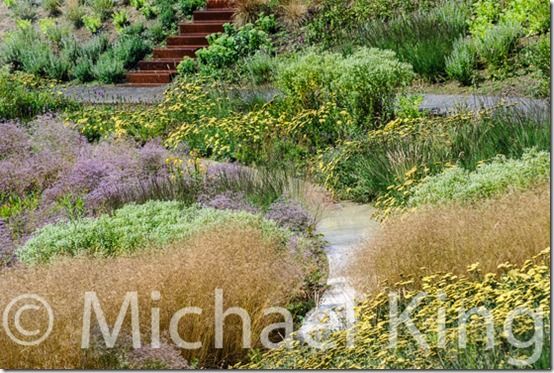 Large scale naturalistic planting schemes have become popular in many European and North American public parks. Such schemes filling the horizon with wide drifts of mixed perennials are, however, always created within a wider, structured landscape.

Most gardens are much smaller than public parks, yet contemporary gardeners are keen to emulate the high profile, naturalistic schemes that are being widely acclaimed in the media. However, no matter what the scale, perennial plantings need to be given structure and focus in order to be effective. 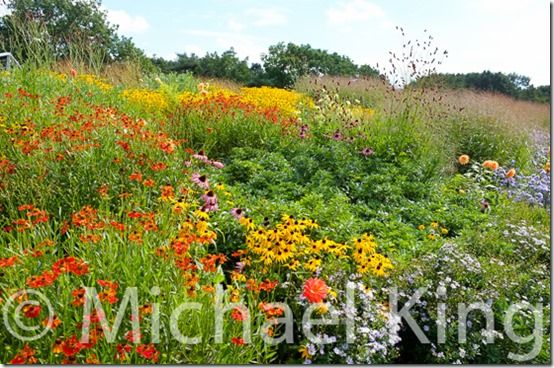 On a large scale designers have the opportunity to use an interplay of massing and mixing, coupled with repetition to give their schemes organisation and form. Paths cutting through such schemes together with boundary walls and woody plantings are frequently used to organise such designs.

The course I teach at MyGardenSchool entitled “New Perennial Planting for Today’s Gardens” is intended to resolve the contradictions that seem to arise when naturalistic schemes are to be implemented into domestic scale settings. Their restricted space simple does not allow the use of repeating masses of individual species for dramatic effect. 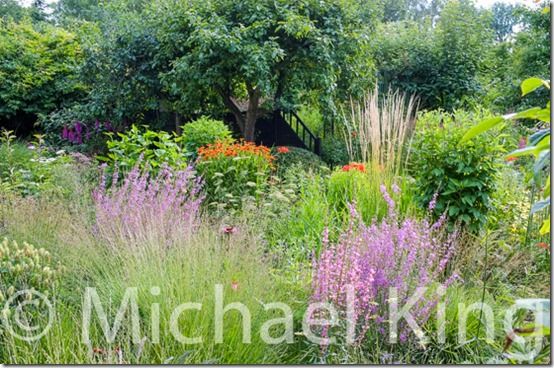 To begin with, I show how by using a restricted pallet of perennials it is possible to develop a strong visual impact and allow this to be repeated across the planting are. Careful selection of bold theme plants is the key to this step, with plants being used that are perfectly suited to the available growing conditions and which together are capable of forming a stable community to form a matrix of vegetation with a long season of garden interest. 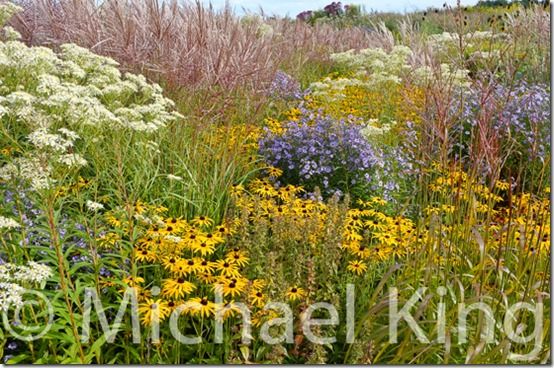 Identifying suitable theme plants for my perennial meadow planting schemes is not easy which is why I created a series of eBooks giving specific examples in order to get designers started and inspire less experienced gardeners. 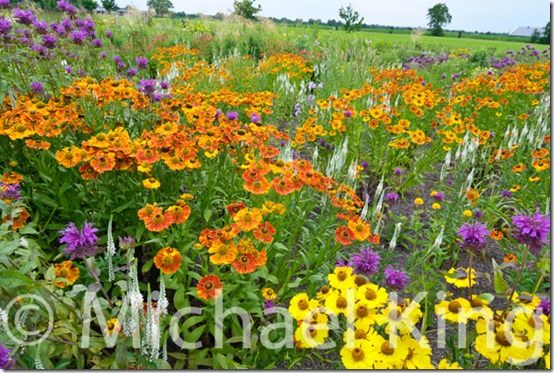 Theme plants alone are not enough to make a satisfactory perennial meadow as although they make a bold block of vegetation, if on approaching it all that is revealed is the five or so perennials making it up then it will become quickly boring. By adding what I call “complementary plants” to my schemes I aim to achieve three things. Firstly, these plants can extend the season of interest, for example when spring flowering bulbs are added to a scheme featuring many late season flowering perennials. Secondly, the complementary plants can be added to discrete areas of the whole planting area to create points of focus and contrast; perhaps by being used nearer to a path or adjacent to a sitting area. Finally, the complementary plants can add a counter theme to a design, a contrasting colour and form, or be used to introduce formal patterns that link with other design elements within the surrounding garden. 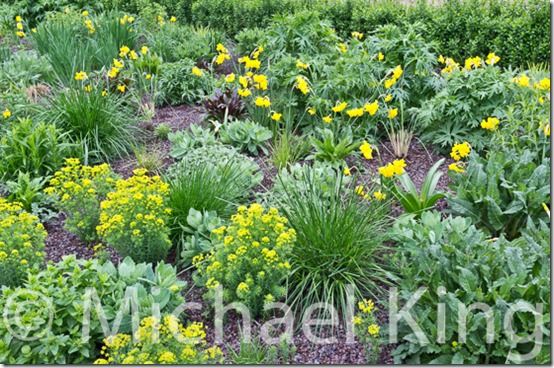 Theme plants and complementary plants work together to create perennial meadows that are visually interesting for as long a season as possible and which are worth viewing from afar and which become more interesting when they are approached and viewed from nearby.

Perennial meadows can offer a new way of introducing naturalistic perennial planting into cutting-edge gardens. If you haven't tried yet, perhaps now is the time to give them a go. 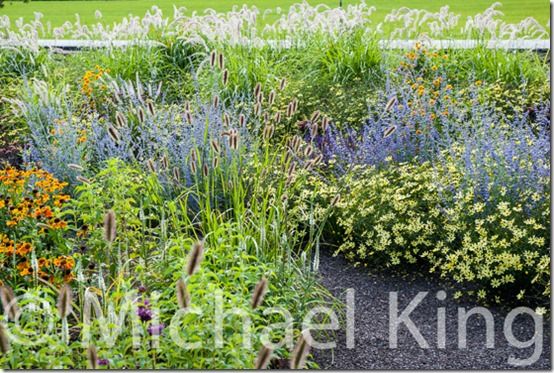 Within the scale of an average sized garden, perennial meadows need to be organised into clearly defined planting areas that are surrounded by a network of paths. This allows the planting areas to be entered into, but also is an essential step in placing them firmly within the garden landscape. 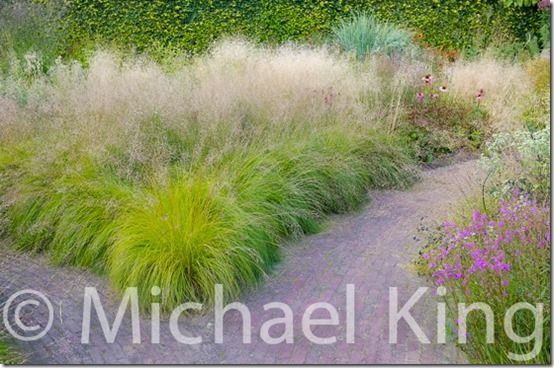 Where space allows, a series of planting areas can be created and this opens up more opportunities for introducing variation and visual impact. I often place contrasting schemes into adjacent areas and so introduce variations of height, colour and texture. Ornamental grasses are especially useful in this context with perhaps a block planting of a single species standing across the path form a scheme in which it or a similar cultivar of the same grass is being used as a theme plant.

These are just some of the tricks that can be used to adapt the drama and excitement of public naturalistic planting schemes for use in small domestic garden settings.

Perennial meadows offer a new way of introducing naturalistic planting into cutting-edge gardens. If you haven’t tried mixing perennials to create this new form of planting for yourself perhaps it is now time to give it a go.

Although I’m a bit of a shrubby I am a huge fan of this style of perennial planting. I love the way the colours and textures drift together and the way the light plays upon them. I am fascinated by the way this lower plane of planting changes with the time of day. I remember visiting Pensthorpe Nature Reserve in Norfolk, England one early evening in midsummer. The low light through the Piet Ouldorf designed planting was quite breathtaking.

Michael’s designs are so wonderfully naturalistic and textural. I love the idea of drifts of single varieties and paths winding through the planting. I also love the idea of the way the planting develops and billows as the year progresses. I’m certainly inspired to plant more perennials and I might see you soon on his course New Perennial Planting for Today’s Gardens