Visitors to RHS Chelsea Flower Show and certainly anyone who saw any of the coverage of the show will have caught a glimpse of a huge sculpture of a delicately coloured phalaenopsis flower sitting on a flower studded mound. There is always lots of sculpture at Chelsea but this was different; an unusual subject, surprising colouring and displayed in solitary isolation without a range of other pieces alongside it hoping to achieve a sale.

The vast moth orchid bloom by British sculpture Mark Quinn, entitled Rush of Nature which celebrates the garden as an artistic medium was commissioned as an iconic image for this year’s R.H.S. Chelsea Centenary. The objective being to auction ‘Rush of Nature’ at Sotherby’s to help raise 1 million for the next generation of horticulturists. Encouraging young people into the industry is one of the main objectives of the Society. The funds will be used to fund the creation of the new RHS apprenticeship scheme, a new learning centre and to help fund the campaign for school gardening. 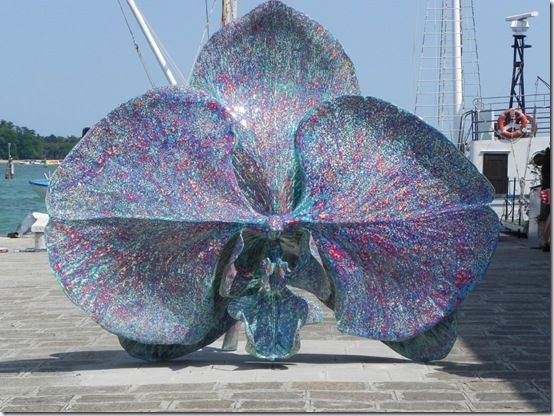 As an artist Mark Quinn was a high profile choice for the RHS following the visibility of his work during of the London 2012 Paralympic games. His giant sculpture “Breath” of Alison Lapper featured in the opening ceremony.

As I said in my last post I recently visited Venice for the first time. I went to see the city, not realising I would have the bonus of the 55th Venice Biennale at the same time. During the summer venues throughout the city display free exhibitions of art in all forms; an amazing opportunity to discover an incredible range of artworks that one might otherwise never see. 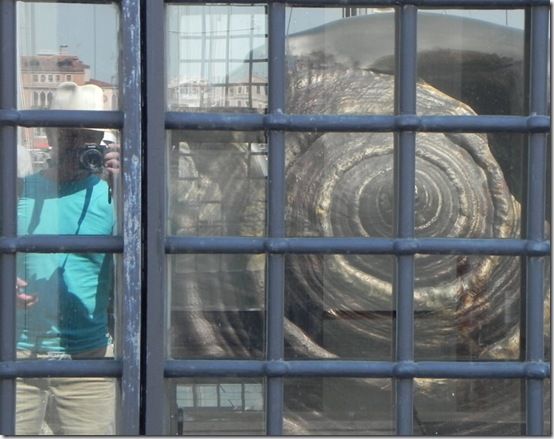 It’s impossible to miss the Venice Biennale, even if you are a tourist visiting St Mark’s Square. Glance across the water to the island of San Georgio Maggiore and you will see the giant 11 metre inflatable version of ‘Breath’, by Mark Quinn sitting on a white plinth alongside the Palladian facade of the church. The lilac coloured figure of a pregnant Alison Lapper is a stark, controversial contrast to its surroundings. I’m not sure it’s a thing of beauty; I wonder how others feel about it? 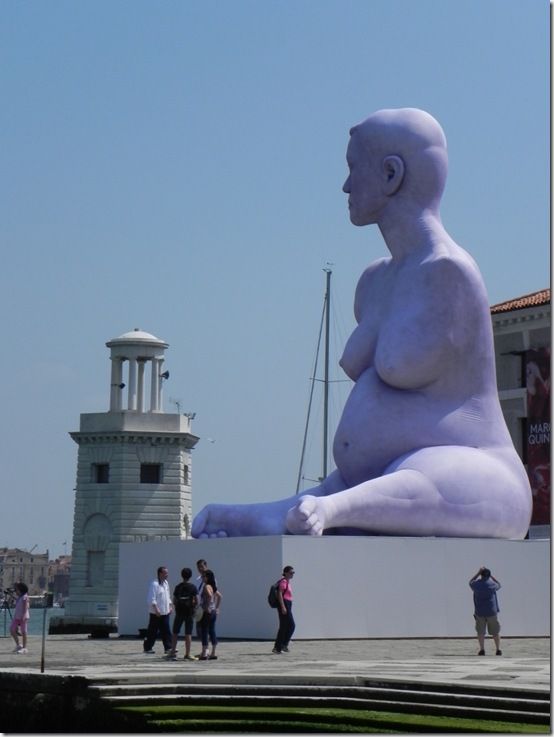 I paid a visit to the island of San Giorgio Maggiore where there is a substantial exhibition of Mark Quinn’s work at the Fondazione Giorgio Cin. I’m not a great fan but was curious to see what was on show. Alongside the extravagant yachts on the quayside sit five colossal golden seashells in the series ‘Archaeology of Art’. Big, opulent, possibly vulgar but really rather beautiful I have to admit they appealed to me. I loved their reflective quality and the way they played on the reflections of the water and historic Venice. The soft organic lines of the seashell sculptures and their metallic nature are such a contrast to the stone and architectural lines of the city. Maybe they’re there to appeal to rich oligarchs in yachts. I think they look good in this setting and they reminded me of the huge seashell sculpture on the beach at Aldeburgh in Suffolk, England which I so admire. 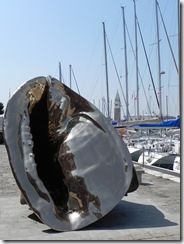 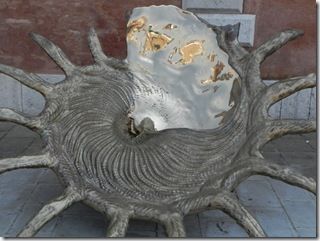 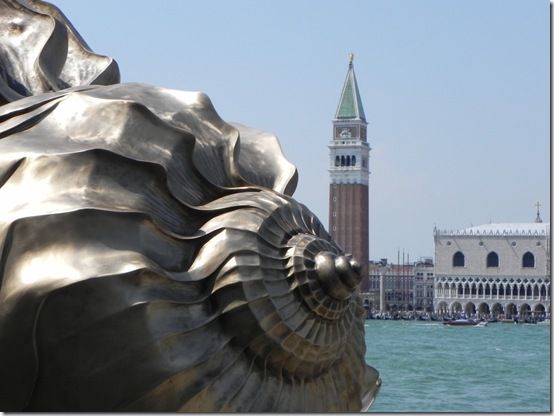 Further along the quayside sits an echo of Chelsea 2013. Here is a coloured version of ‘wilder shores of desire’; a bronze orchid cast and painted with eighteen layers tripped back so that each is visible. To most of us this is the same as ‘Rush of Nature’; I’m sure it’s not but there is no doubt that Mark Quinn has produced a number of bronze moth orchid flowers in a variety of colours. 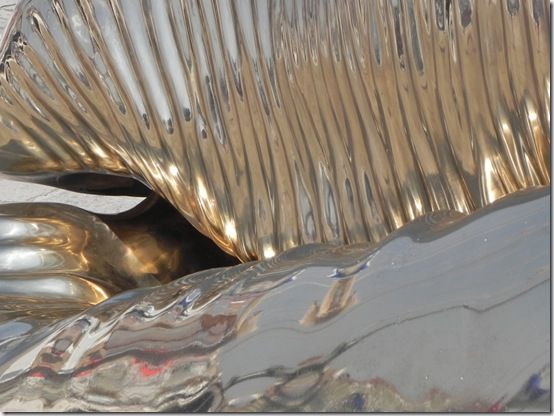 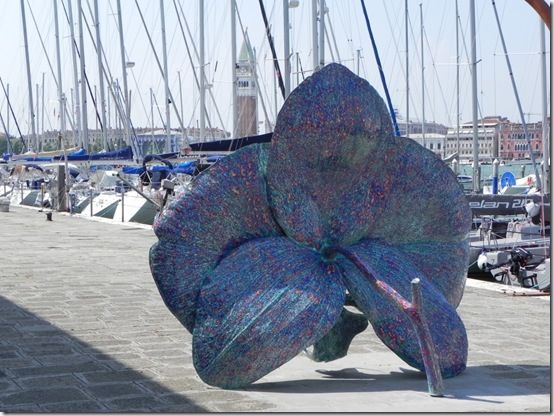 The one in Venice is surprising and stunning in its setting. The colours work in the sunshine, something that was rather lacking at RHS Chelsea 2013. They also work with the boats and the waters of the lagoon. For me a phalaenopsis is more at home in a warmer environment and looks out of place in a cool English garden setting. But am I just too conventional and like things to sit comfortably in their surroundings.

The rest of the exhibition at the Fondazione Giorgio Cin showcases sculpture and paintings by Mark Quinn. I can’t pretend I liked it but I’m glad I’ve seen it. Maybe I just can’t imagine making a sculpture of my own frozen blood and I just don’t like raw meat anyway? 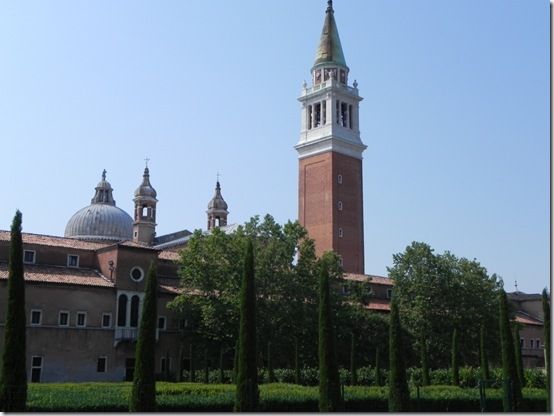 I headed for the Church, the Titian paintings and the campanile. From the top of the bell tower the views across Venice, the islands, and the lagoon are stunning. The architecture of the church itself and of the cloisters and amazing parterre gardens are at their best from here. I can’t help ponder what we are creating today that will last as long as these architectural masterpieces and will visitors flock from all over the world to see them? Will people long to see a Mark Quinn phalaenopsis in two hundred years in the same way that they come to see a Titian. Certainly the lilac colossus sitting beneath the campanile is unlikely to be even a part of history in just a few years. Perhaps that’s the point of it? 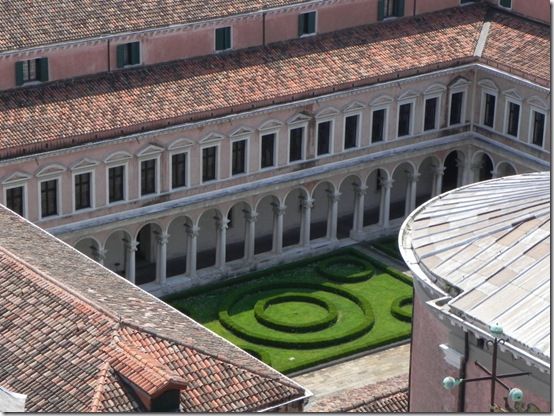 It would be great to hear you views; do share them with me and other readers. Do you like this type of sculpture; would you want it? I would also love to hear from others that have visited Venice during the Biennale. What did you like and what did you hate?