I remember having a clump of snowdrops in our garden when I was a child. They emerged from a gap between the stones in the sunken rock garden at the front of our house. The buds were pointed, like little green and white penguins, before the pendent blooms emerged. I think gardens then either had them, or they didn’t; not plants that you went out and bought.

When I worked in a florist and plant shop we had bowls of them as cut flowers in the window in February. They didn’t come from a conventional flower wholesaler; instead a rather rustic old lady turned up and sold them to the owner for cash. Every bunch of delicate porcelain blooms was framed with dark ivy leaves, and they were often sold in posies with dark purple violets, that smelt of cucumbers, and sweetly fragrant grape hyacinths. I grew lots of things then, exotic and ordinary, but I never thought of growing snowdrops. 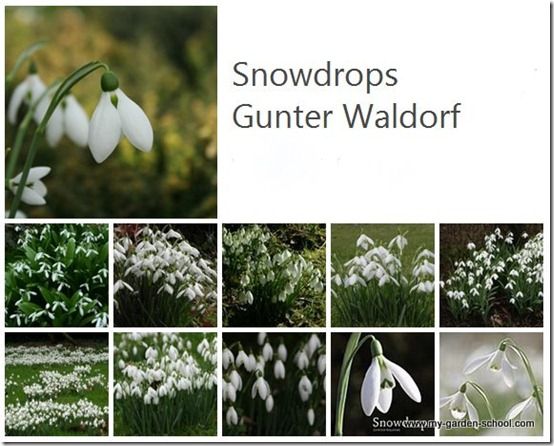 When I had my first country garden I wanted snowdrops. The front garden was shady and the soil quite heavy, the old brick cottage seemed to demand them. I bought bunches of snowdrops in the green from a local greengrocers, where they were displayed wilting in a wooden box on the pavement outside. No ivy leaves this time; the bunches of snowdrop bulbs, with the remains of flowers and limp leaves, were wrapped in pieces of newspaper. Gradually over the years the colony grew and they were a feature of every February. A few were picked by the children for the little glass snowdrop vase that sat dusty on the windowsill until snowdrop time came. 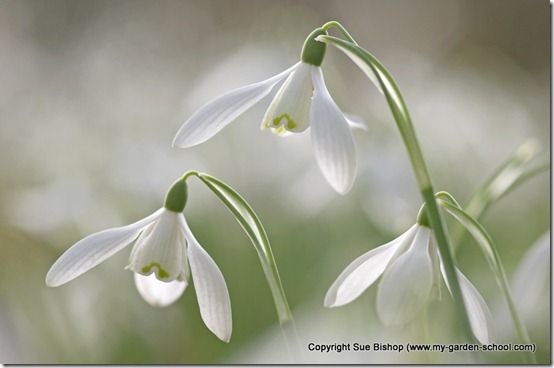 I suppose I really began to notice snowdrops when we moved to our present garden. That first spring the gardens around were carpeted with snowdrops, so I decided to plant lots. I bought three thousand bulbs in the green, and planted them in imaginary drifts on a freezing day at the end of February. The following January I waited for the spectacle: ten blooms appeared the following month, no more. Our soil was just too dry, we have chafer grubs; maybe I planted them too deeply? Something had definitely gone wrong. Again the lower lying, moister gardens were carpeted in drifts of green and white; disappointment is an understatement. 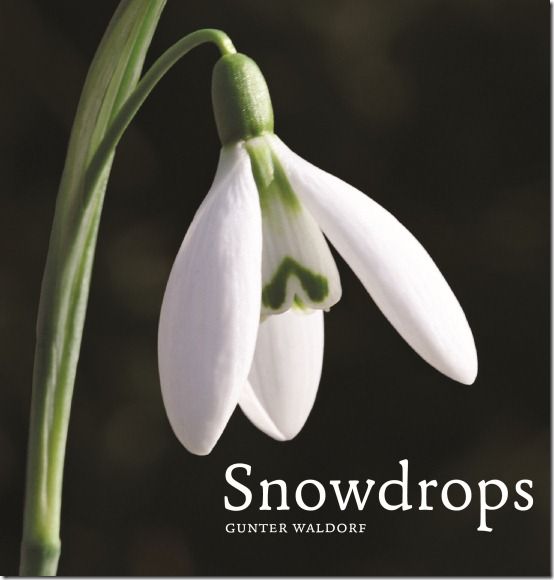 About the same time I got to know quite a few galanthophiles in the Hardy Plant Society. At meetings, single snowdrop plants, grown in pots, were displayed for all to admire on the tables in village halls. Variety names were quoted by proud owners. Snowdrop forays were excitedly planned to gardens of other galanthophiles. The camaraderie amongst them was enviable, and I felt a bit of an outsider. Was I tempted to cast aside my allegiance to woody plants and join them? Could I spend eleven months of the year waiting for four weekends of green and white diminutive flowers? Although they could obviously see the subtle differences between snowdrop varieties I was struggling; they were all snowdrops to me, or were they? I really liked the simplicity of the single snowdrop. I liked the petals to have that elegant curve. I liked the skirt to be visibly laced with green and I liked slender leaves. I suppose I was starting to look at them a little more closely. 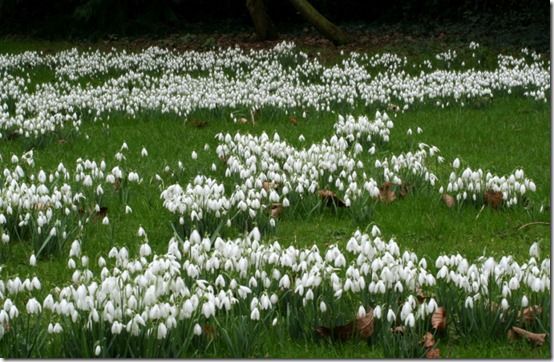 Whether you are like me, you love snowdrops in your broad garden palette, or you are a dedicated galanthophile you will adore a new book: Snowdrops by Gunter Waldorf. This little gem of a book is a treasure trove of glorious portraits of probably every variety in cultivation, including yet un-named ones. It shows the subtle differences to perfection and describes them concisely. 300 varieties are photographed, and best of all in their natural setting.

The book tells you all you need to know about growing snowdrops, planting snowdrops, acquiring snowdrops, collecting snowdrops and propagating snowdrops. It also lists sources of supply and gardens famous for their snowdrops in the U.K. You can both be enthralled and amused by it, or you can become bewitched by it and become a galanthophile. For existing galanthophiles it is pure indulgence written by one of you; perhaps I want to say one of us? 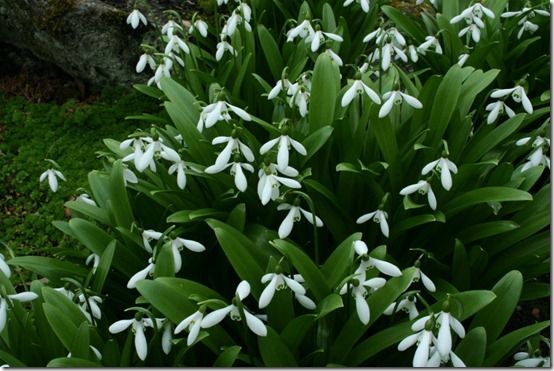 I rarely read novels, and although I’ve written a few I’m not often drawn to books. However from the first moment I saw this book I wanted it: to look at it, dip in and out, time and time again. It has that magical fascination that I’ve found in certain books about plants and gardening over the years. I know every page, and every picture in Penelope Hobhouse’s ‘Colour in the Garden’. I’m still fascinated by the odd black and white grainy picture in ‘The Encyclopaedia of Flowers and Plants’ I had as a boy. I have the same bond with this book on Snowdrops. I know I shall still be revisiting its pages when I’m too old to bend low enough to admire these little beauties in the flesh.

‘Snowdrops’ would make a wonderful present for any plant lover, maybe for Christmas? Wish someone would buy it for you? Go on – treat yourself!

Snowdrops by Gunter Waldorf is published by Frances Lincoln

Available shipping for Europe and USA