The wet weather this summer has resulted in plenty of leafy growth on most woody plants including fruit trees, shrubs and climbers (especially wisteria!).  I must admit I have not got around to pruning some of my shrubs as soon after flowering as I would normally.  However, I think leaving pruning for a while, until some of the new growth shoots are more developed, almost makes it easier to see where you should be pruning the shoots that have flowered back to.  I find I have to be a bit more careful not to damage the new growth when pruning cut out branches, but the finished result is just as good.

So now it’s time to think about summer pruning apple trees.  Mine are grown as ordinary bush trees; in other words a branched head on a stem of less than 1 metre (3 feet) in height.  In late summer, or early autumn, I cut back the strong vigorous shoots that have developed over the summer months to around three leaves from last season’s growth.  Over the years this builds up the fruiting spurs which blossom and produce next years fruits.  Most text books will tell you to prune now, and to prune again in winter when the leaves have fallen.  This is the ideal situation, if you have time.  Personally I do most of my pruning now, and then I give the trees a quick once over in winter if I get around to it.

Summer pruning wisteria is similar to summer pruning apple trees:the objective is to shorten back the new shoots, and encourage flower bud development on woody spurs. 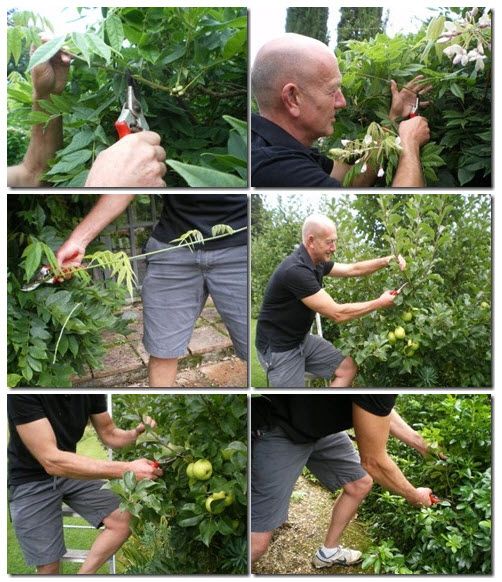 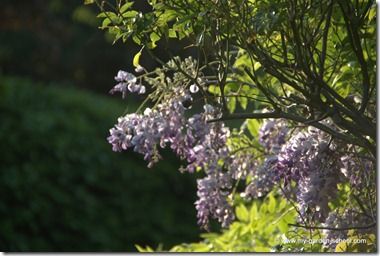 While I had the secateurs out I decided that I had to reduce the width of a large choisya growing along the pathway.  This has now spread beyond its boundaries, so a little summer pruning was essential.  Rather than cutting back the tips of the shots all over the shrub I like to be selective, and maintain the natural habit of the plant.  I cut back some of the longest stems right back into the heart of the plant to allow new shoots to develop from inside the shrub.  This should help to promote a nice, bushy plant of reduced proportions.